Who knew counting sheep could be such fun?  Three generations went to watch Babe this Easter Weekend and it managed to do what has previously only been achieved by Strictly Come Dancing!  Entertain all of us in equal measure.

Your probably familiar with the premise – cute piglet has aspirations beyond providing the farmer and his family with bacon and achieves the seemingly unlikely status of becoming a rather marvellous sheep-pig.

What’s right with it – giggles from the start courtesy of the fabulous fuzz ball sheep who say nothing more than ” baa! ” and yet somehow manage to have the majority of the audience laughing away before the performance really starts.

Great puppets not just in the shape of the ambitious Babe, but also some animated ducks, pups and a ewe to name a few!  Hats off to the actors who’s lower backs must be screaming by the end of each performance.

Lots of positive messages around “you can be whatever you want to be with hard work”, “family is fab”, “even grumpy non communicative farmers have love in their heart”, “a young piglet can teach an old dog new tricks” and my personal favourite “good manners rock!”  All delivered in a reasonably lighthearted, funny and jauntily musical way. 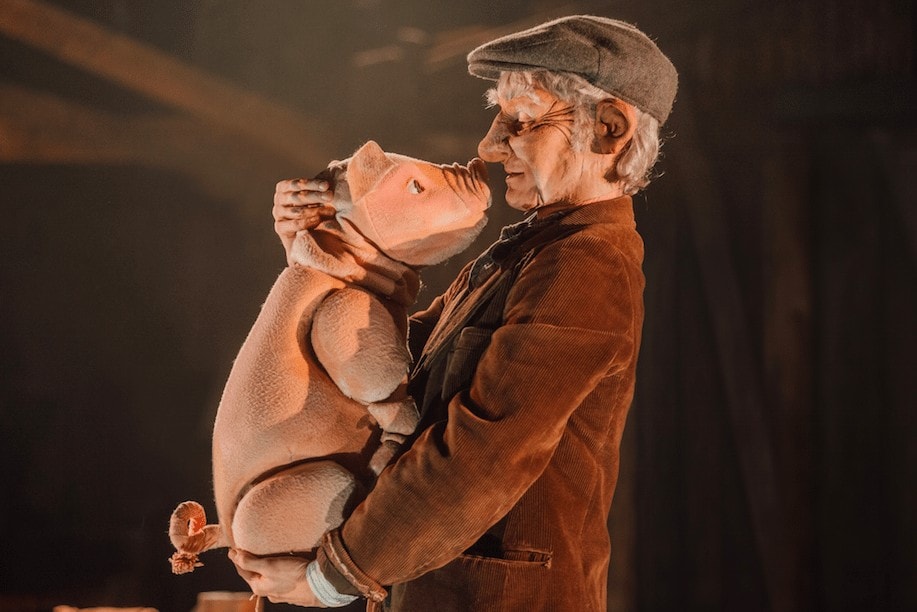 The staging is great (if a little colourless) and the transition between scenes seamless bar the odd fallen fence.  Wonderful costumes, characters, music and production.  Even a spot of audience participation in the form of chanting to help Babe, which the kids loved.

What’s wrong with it?  Not much.  The suggested audience age of 5+ is about right. The younger audience members were getting a bit restless half way through the second act.  However, I thought the timing worked and the 20 minute interval allows for some healthy debate about the cliff hanger at the end of the first act.

It does have a slightly dark feel to it at times and there is quite a “scary” section prior to the end of act 1 which my 5 year old closed her eyes for and told me to “tell her when it was over”!  I was terrified but all the kids seemed fine and the only dramatic screams were those in my own head.  Children are apparently made of tougher stuff these days.  Further evidenced by the fact there were no hysterical tears as the pups were collected by their new owners, leaving home and their mother behind. I had a job not tearing up and held on to my five year old extra tight trying not to dwell on the inevitable.

In summary, the adults amongst us thought the sheep stole the show, Claire Greenway my personal favourite with some fabulous bottom wiggling and a general aura of mischievousness.  Although my daughter was a big fan of the dog, Fly (Nicola Blackman – fab voice) and her pups and spent the majority of the afternoon running around pretending to be Fly.

There is something for everyone and if you get the opportunity to see Babe it’s well worth a trip. For timings and venues visit babethepiglive.com

NB: Andrea and her Mother and daughter received complimentary tickets in exchange for this review.

Sounds great, I wish we could fit in going to see it!