Open Sesame! Having thoroughly enjoyed our panto experience at the Lawrence Batley Theatre in Huddersfield last year, we were delighted to be invited back to this year’s panto offering, Aladdin.

NB: Kelly and her family were given tickets in order to review but all views and opinions remain their own.

I’ve always found it a tricky production to pull off, it’s one of the weaker panto stories and there is such a risk of some of the characters bordering on racist caricatures.  So, we headed off with two enthusiastic 6 year olds to see how LBT had approached it.

As you’ll probably recall from my review last year, the thing we most enjoyed last year was the very traditional nature of the LBT’s production, simplicity excellently executed, resulting in the most wonderful and fun atmosphere.  Unfortunately, the first half an hour of Aladdin was slow and simply didn’t conjure up the magic of panto.  The audience was therefore slow to respond, and a quiet audience does not allow the atmosphere to build into that uniquely British panto vibe.  By the end of the first half things were warming up and I’m glad to say that the second half faired far better in eliciting audience participation.  The adults, as well as the children, really got into all the call backs and chanting. 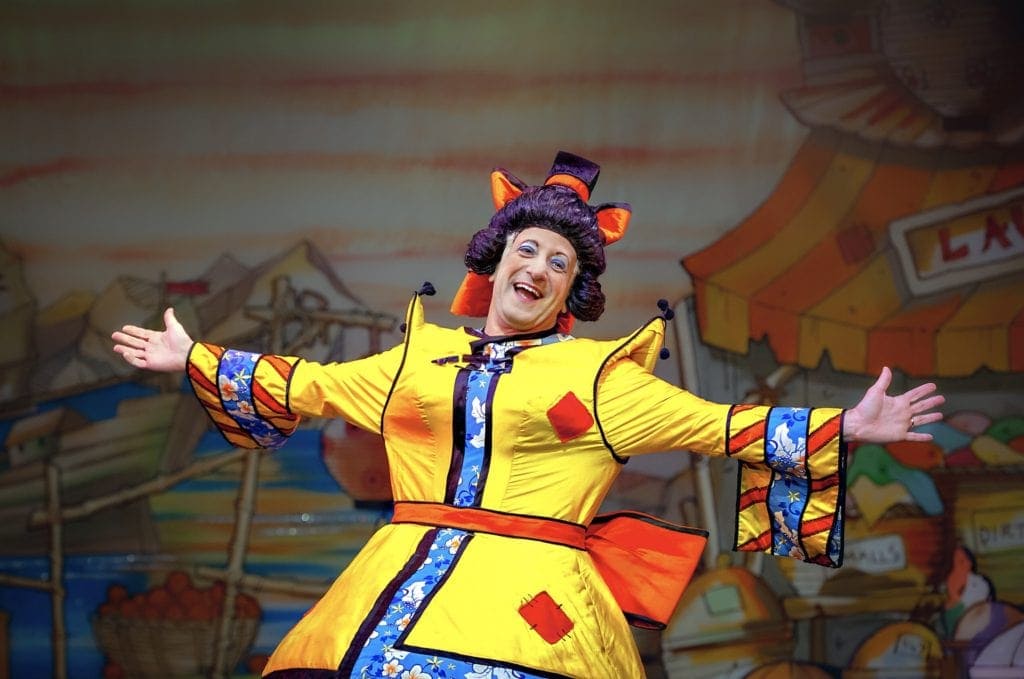 The production was faithful to the story, the sets were simple but effective.  The lighting, music and costumes were also to be applauded, especially the designs for the finale.  There were a couple of weak musical numbers, but the majority were either songs you’ll recognise, or sung to the tunes of well-known songs.  This certainly made them feel more accessible to the audience.  The medley of songs that centre around ‘money’ was particularly enjoyable and had the audience toe tapping, if not singing along; a great start to the second half.   The audience participation in ‘baby shark’ had the adults groaning in equal measure to the children’s squeals of delight.  All making for good panto!

Notable performances were the two genies, genie of the lamp (Stephanie Hackett) and genie of the ring (Nicola Jayne Ingram) who totally hammed up the ‘Yorkshire’ and had the audience frequently giggling.  Lots of fun and personality injected into the roles, which really helped pull the show along at slower times.  Robin Simpson returned as the Dame, Widow Twankey, and brought lots of amusement with his entertaining performance.  He danced the line between jokes suitable for adults and those for the children, although struggled with the ‘cold’ audience at the beginning.  A Dame needs to bounce off the audience though, and they weren’t playing ball to begin with.  Unfortunately, the Empress of Peking and Princess Jasmine struggled to win over the audience, although the Empress did find more favour in the second half with her Egyptian exploits.  Aladdin made a good goodie and Abanazar a good baddie (particularly when bathed in green light and contorting his rubber like face).

The stand out scene for us was most definitely the flying carpet; look out for it.  The special effects wowed the audience and it really did feel more West End than Huddersfield; beautifully executed!

The LBT has again produced a feel-good family panto, where it is lucky enough to play it to audiences in a theatre that truly doesn’t have a bad seat in the house.  It is showing until Sunday 6 January 2019.