This is the first year our children have really ‘got’ panto. Oh yes they did! We were therefore looking forward to taking them this Christmas.  However, the one we booked, at a well-established panto theatre and with a “celebrity” cast, was terrible.  We were therefore apprehensive about our invitation from the Lawrence Batley Theatre (Huddersfield) to watch Jack and the Beanstalk.

It is only the second year that the theatre has put on a pantomime in recent times.  There were no “celebrities” (I use the inverted commas to reflect the fact that so many panto stars seem to have their names preceded by “90’s pop star”, “star of Brookside”, or “reality star”!).   Jack and the Beanstalk inevitably disappoints when it is time for the Giant to enter the stage…….but off we went, full of hope!

The theatre itself is medium sized, appears to have been refurbished recently, has comfortable seats with a decent amount of leg room and some of the best value refreshments I’ve ever seen in a theatre (£8.20 for 3 premium ice creams and a sharing bag of jelly beans).

The opening set and staging was beautiful, with some of the best panto style scenery I have seen for years.  So when the curtain rose and the stage was revealed, I was feeling hopeful.  The first song, ELO’s ‘Mr Blue Sky’, was a slow start, however generally the music was fantastic.  The grown-up’s highlight was a rather wonderful ‘Bohemian Rhapsody’, sung in parts as tension rose about the possibility of Jack climbing the Beanstalk to take on the Giant.  The children were more taken with ‘I’ve got this feeling’ and a brilliant, if slightly amended to suit the story, version of ‘Gangnam Style’.  The sound in the theatre was very good and the timing of the trio of musicians in the pit was impeccable.

The production was a little slow to get going, each new character had some solo time on stage, with their own comic turn and introduction of an entrance call/response.  (Oddly, those call/responses were heavily utilised for about 10 minutes then appeared to disappear from the script until near the end of the show).  However, after the first 20 minutes the panto really found its flow.  The script had just enough local jokes with humour pitched at all ages and told the story nicely.  The Dame (Dame Dorothy Trot), with his fantastically OTT and frequently changed costumes, steered the show perfectly.  The villain (Nightshade, the Giant’s henchman) is not scary, but instead finds a suitable and funny mixture of camp and loathsome.  Jack is likeable and fun, while Jill is kicking butt for strong girls.  The Giant was a wonderful surprise for the children, played by a nine-foot puppet. The show stealing performance has to go to that comedy stalwart, the pantomime cow.

The actors’ rapport with the audience, the great music, the silly but story telling script, the beautiful set, the fun costumes, the singalong at the end………….who needs a long panto tradition and “celebrities”?  Not the Lawrence Batley Theatre that’s for sure!  Using a professional cast with local accents rather than paying for ‘names’ means that the tickets were very reasonably priced in comparison to other pantomimes at medium/large theatres.  This, along with the excellent pedigree set by this year’s production, ensures that we will be back next year.

NB: Kelly and her family received tickets to the pantomime for the purpose of this review but all views and opinions are their own. 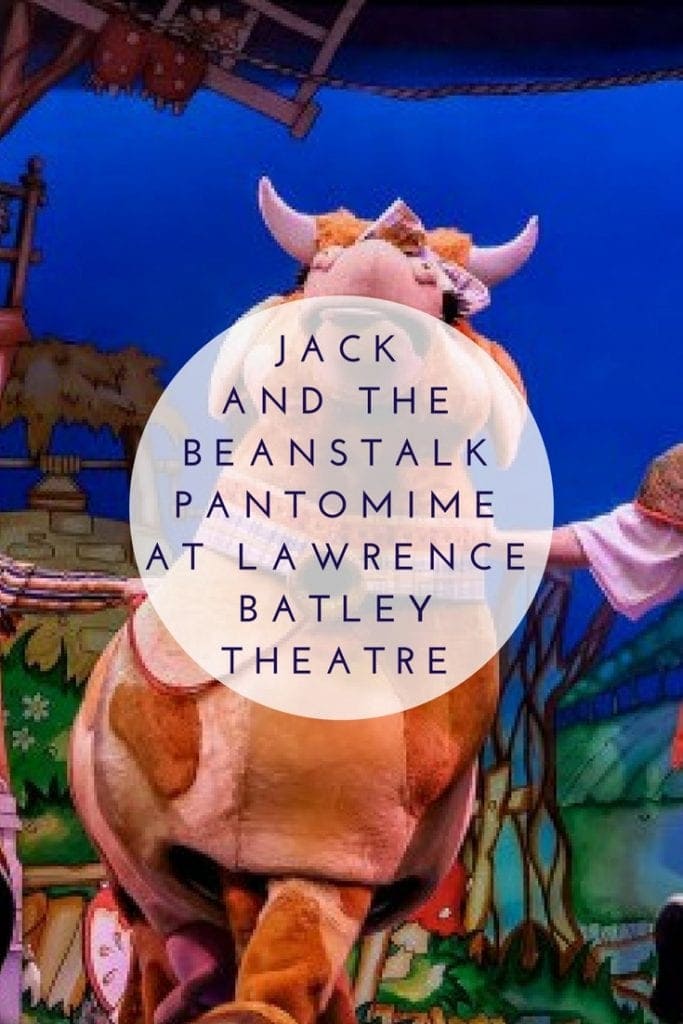