Is Nozstock a Family Friendly Festival?

In 2016 five Mini Travellers went to Nozstock and this year 22 of us went back, proving I think what a good time they had in 2016 to convince us all to go en masse.

Last year the sun shone and was kind to Nozstock and the self labelled Nozzers that attend.  Nozzers partied late into the night, did yoga in the sunrise and sipped lager on the hills,  however as we drove down the M6 on Friday lunchtime into rain that can only be described as torrential we did wonder what on earth we were doing. Would we survive a festival in the rain with three young children?!  12 children overall.

Well the short answer is that we loved the festival (on the Saturday anyway) and totally understood why it has been so popular over the last 20 years;  but the rain on Friday did dampen spirits somewhat and limit the activities that the kids were prepared to do. 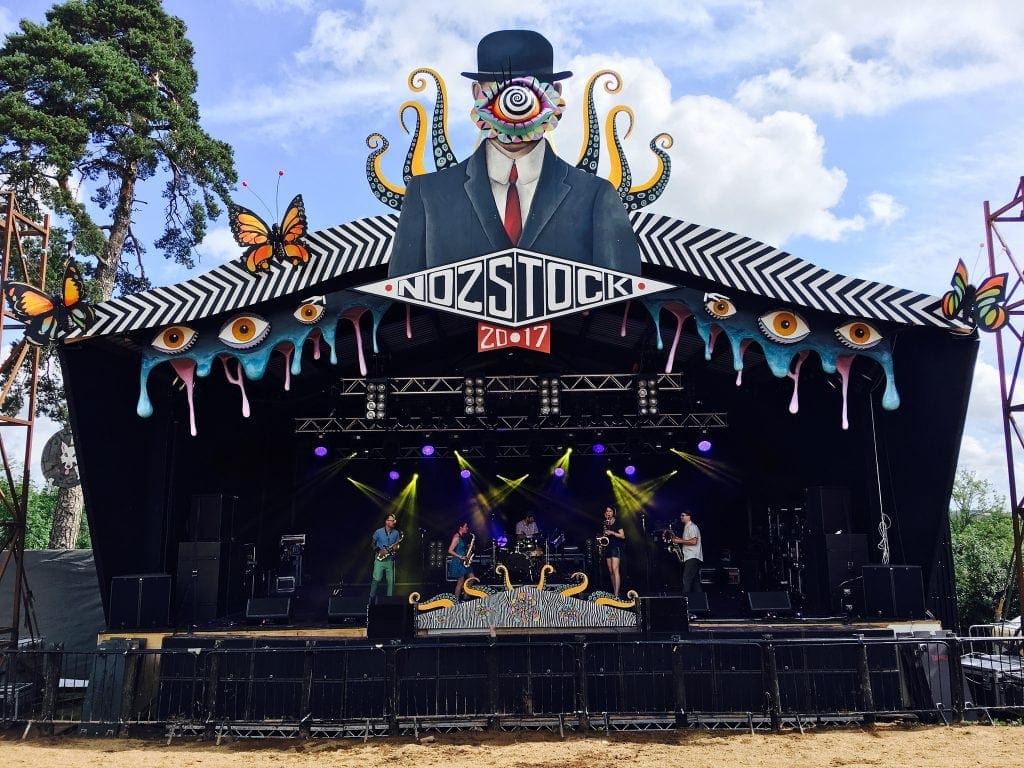 There was a lot of the British ‘keep calm and carry on’ spirit apparent when we arrived at 2pm on Friday into a muddy car park next to a field of tents that initially looked like Glastonbury. Alcohol piled high in wheelbarrows was being taken from cars and vans to small tents that lined the entrance to the site. Surely this festival is just for adults was my initial thought.

However as soon as the festival staff saw the kids they pointed us in the direction of the family camping field and we saw much more room between the tents and the larger family style tents we were used to. The rain was however still pouring without any sign of ceasing and in a panic I booked a room in the nearest travel lodge for Friday night. In the end two of the other families followed suit, only one family was determined to see it through alongside those we were envious of who’d booked a motorhome for the weekend. 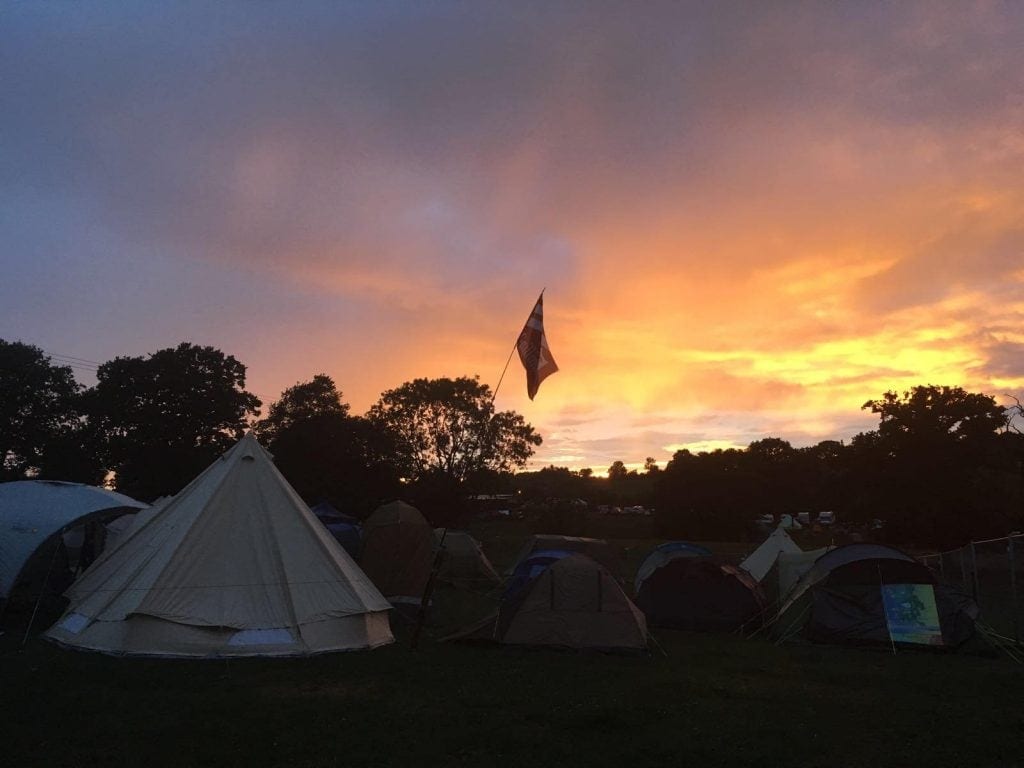 So safe in the knowledge that we didn’t have to pitch the tent we headed into the festival armed with some snacks, suncream(!) and water. We found the Little Wonderland Kids Area quite quickly and there we stayed for a lot of the afternoon. The team from Spare Room Arts were friendly, helpful and wonderful with the kids adapting their activities to fit in a smaller space than they had been hoping to use if the sun had shone.  The kids made festival skirts, festival masks, made puppets for a puppet show and even practiced some acrobatics.

We’ve been @nozstock all day today and had been intending to camp but a storm blue in so we have cheated and left for the night to find a cheap room in nearby Ludlow. It was torrential so we took refuge in the kids tent and these three had a ball. The sun is going to shine tomorrow by all accounts so we will head back again in the morning! Enjoy your Friday night people! I’ll be drinking wine in th the @travelodge.uk !

Finally the finished the afternoon in the arts tent doing some song writing with Dodgy’s Nigel Clarke – as you do. This was a highlight for the kids and they are still talking about it.

When more of our friends arrived we decided to explore a little more and discovered the secret dance stage behind the mirrored doors.  Whilst the sound (and lyrics) of the music, and the Rocky style outfit, didn’t necessarily sound as though it was suitable for kids, them being invited up on stage to dance to get involved in the performance totally made it. 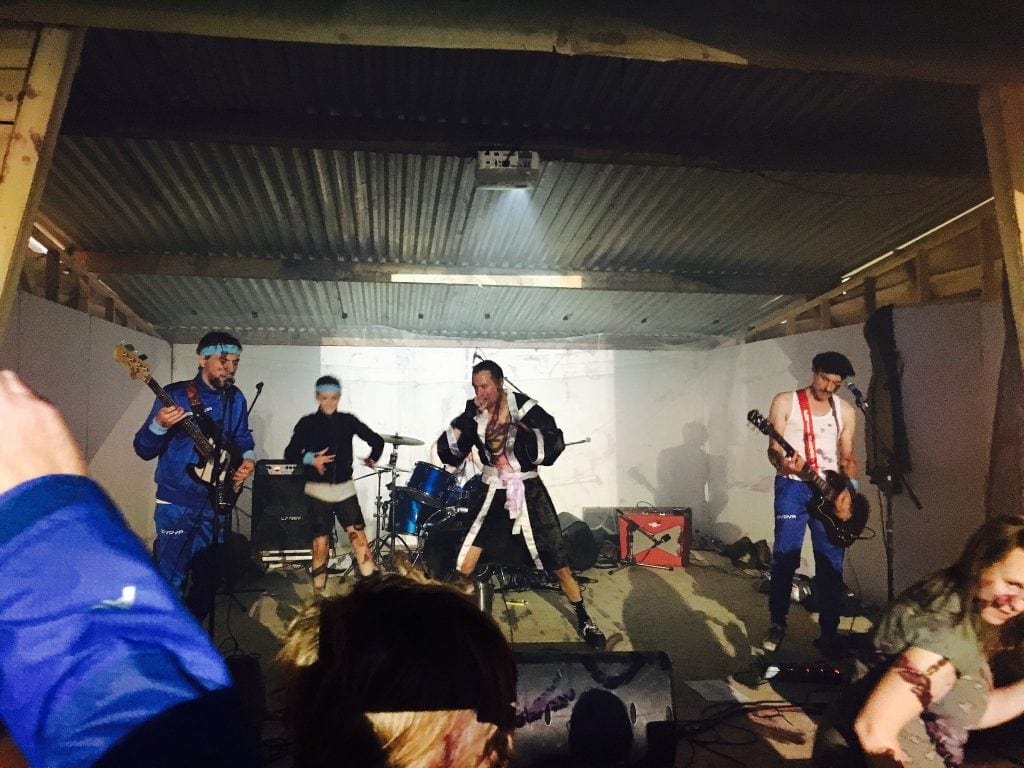 After unsuccessfully trying to eat delicious crepes in the ‘still’ torrential rain we realised it was 7.30ish and the rain still wasn’t stopping.  The kids were soaked through to the skin despite rain coats and wellies – a full wet suit might have been more appropriate – so we called it a night – sad that rain had halted enthusiasm for the evening but determined to head back first thing for day 2!

Whilst we rested at the Travelodge the two families that stayed wrestled slightly with the 3.43am music finish. If this isn’t your thing then it’s something to be aware of at Nozstock. Yes in the family field you are the furthest away from the music, but you can apparently still hear thrash metal being played at top volume when you’re trying to sleep in the tent. All 4 kids slept through the music with no problems at all but that did mean that tired parents were up again around 6!

Day 2 started for us in a more civilised way with a shower in the Travelodge ensuite (never have I liked a Travelodge more!) and some breakfast from the local co-op but on site facilities mean you can have a shower if you are prepared to queue and breakfast could have been anything from bacon butties to porridge or breakfast burritos.

We all rendezvoused at the motor home and the other two families pitched their tents. We were always having to leave by 4pm for a flight to Corsica (all right for some I know!) so no second night camping for us anyway. 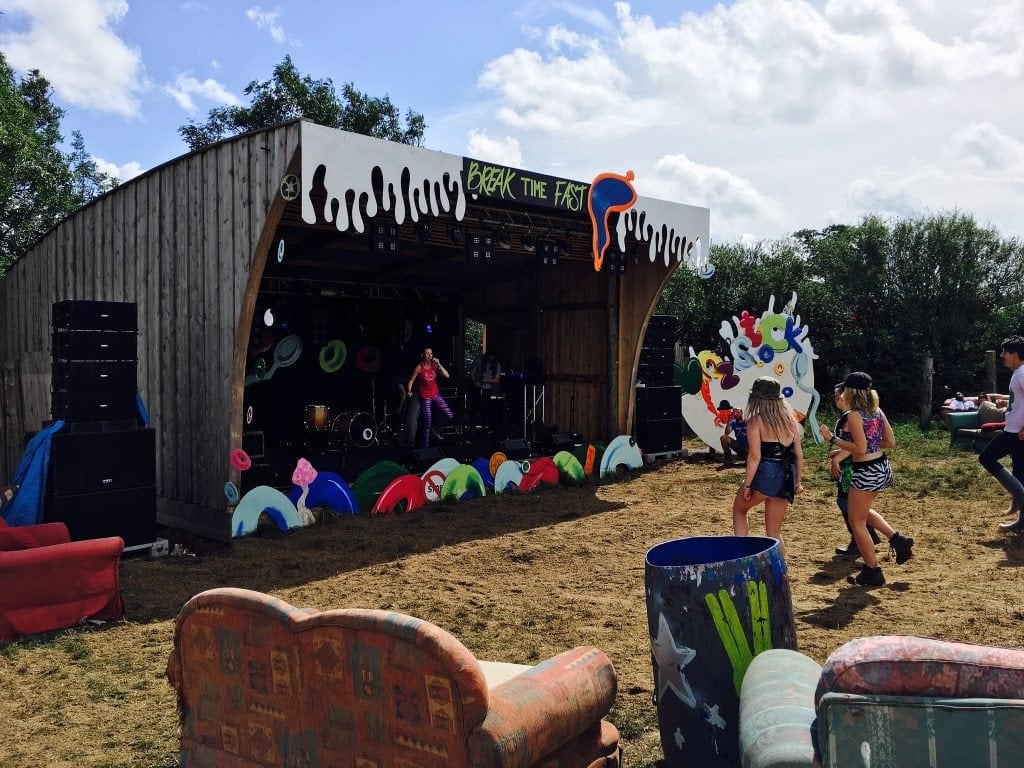 Music and most of the activities re-started again by 11 so we made our way back into the heart of the festival in Sunshine! Yes actual Sun! The first stage we came across was running a morning fitness class and we spotted some yoga too. The kids ran straight to Little Wonderland and showed off their acrobatic skills and whilst the kids would have happily stayed in the kids tent for some more craft, we felt the five hours we had spent in the tent the day before, hiding from the rain was more than enough and there was plenty more to see. So we explored. 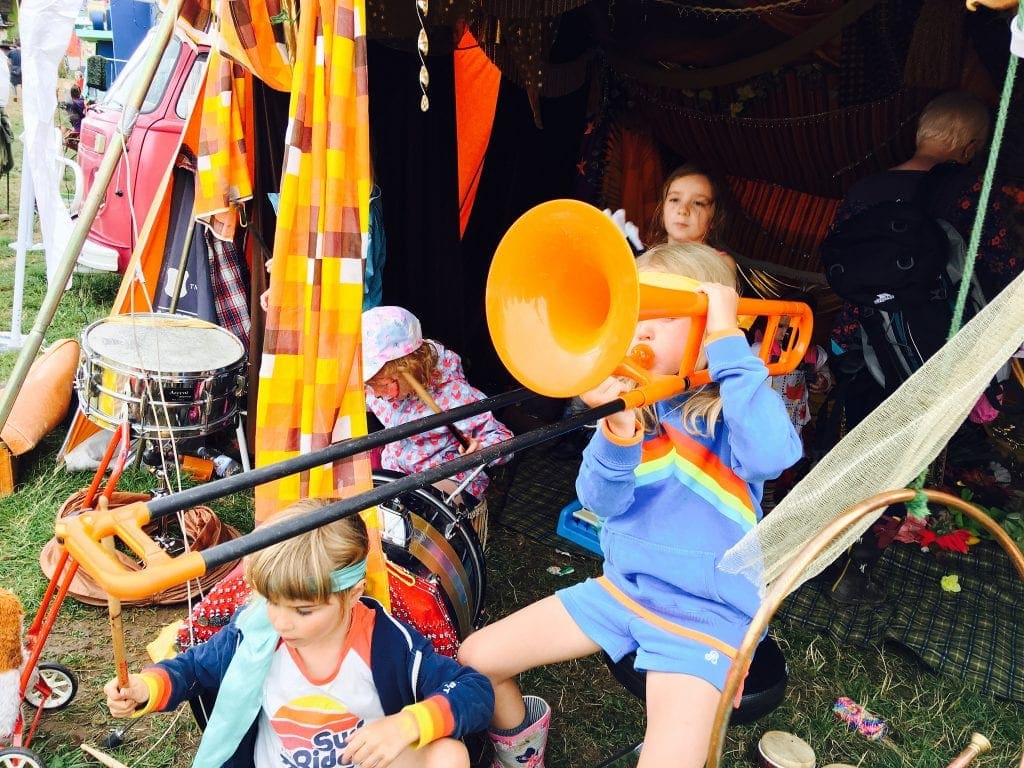 We hadn’t walked more than a few metres from the kids tent when we were stopped in our tracks by the musical instrument tent. There we stood with pints of lager watching the kids get stuck into trombones, drums and tambourines. They were in heaven and well we were happy because they were.

We missed the kids rave by 5 minutes but instead discovered the amusing Star Wars parody made by fans. This kept us dry from the brief rain shower before we found some lunch in front of the main stage. The main stage was a hive of activity with not only bands but many many mini performances everywhere you looked. Spinning plates and hip hop on one side and large insect installations on the other. 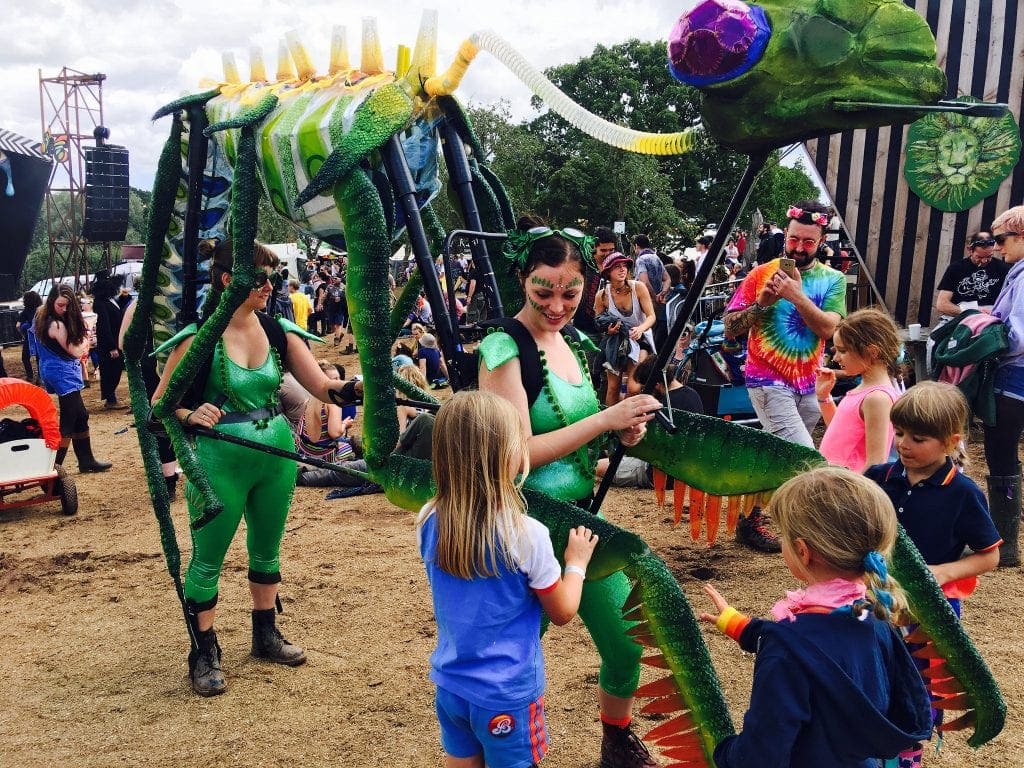 I need to pause briefly to mention the food. I’ve never had such excellent food at an event, prepared quickly for a decent price. The pizza took literally 2 minutes to cook meaning there was a very small queue and it tasted very good, and the Mexican burritos were not only huge, but superb. 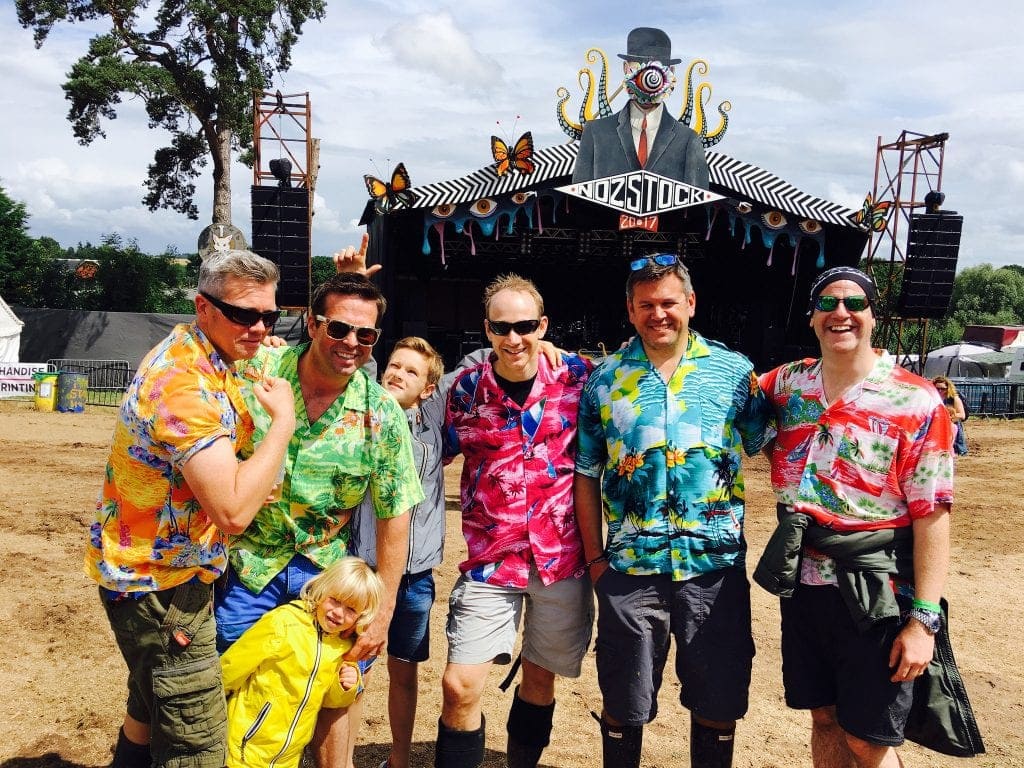 After lunch we found the art installations at the top of the hill and the poetry tent. We watched spinning tops and bought crazy Hawaian shirts (price based on weight!).  We found the newest stage ( Elephant’s Grave) which was just getting started and we amused a few cool kids by dancing towards the back. We sat on the hill (still in the sun) and watched the team arrange the ‘Nozstock’ sign from ‘Stonkon’ to ‘Nozcoks’ and back again. Hula hooping on the hill, whilst watching giant bubbles and listening to the beat from The Copice was another highlight too and with no agenda and nothing we ‘needed’ to do, the day gently moved along watching something here and something different there. Our sunny Saturday meant we ‘got’ the Nozstock vibe. 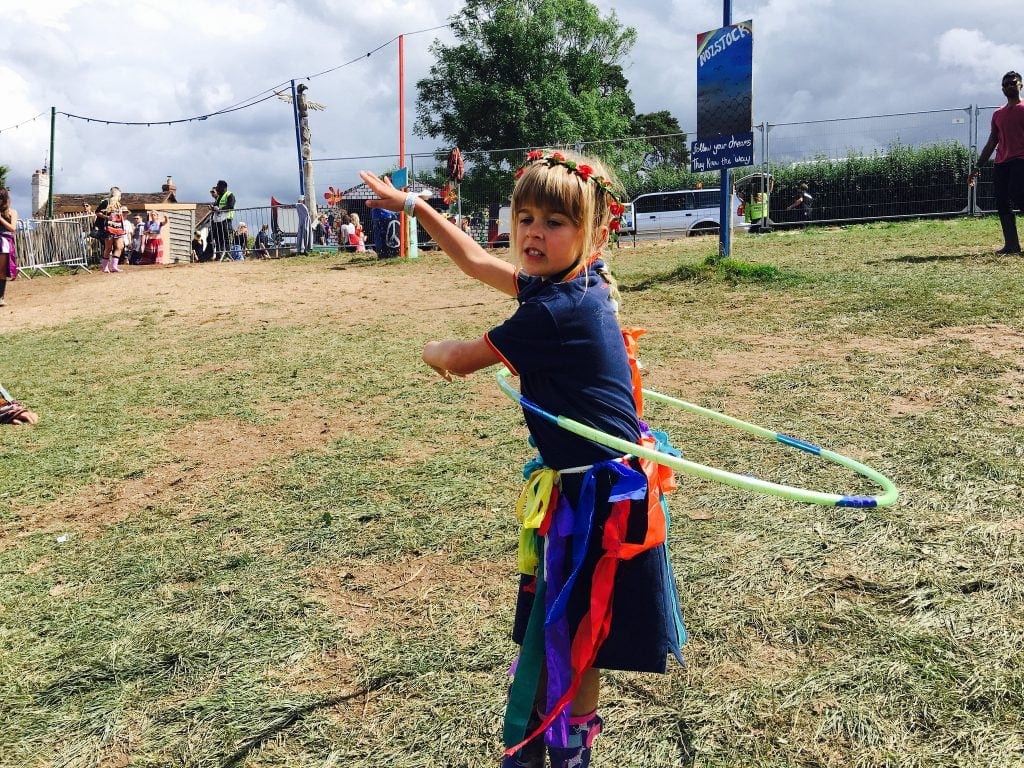 When we had to leave at 4pm to drive to Heathrow we were very sad to go. More so to keep receiving what’s app photos from the rest of the gang making us envious of dancing and games well into the evening.

Granted we may not have been envious of the 3.30am music finish or the camping in the rain but they got to carry on enjoying the festival vibe.  They were Nozzers! 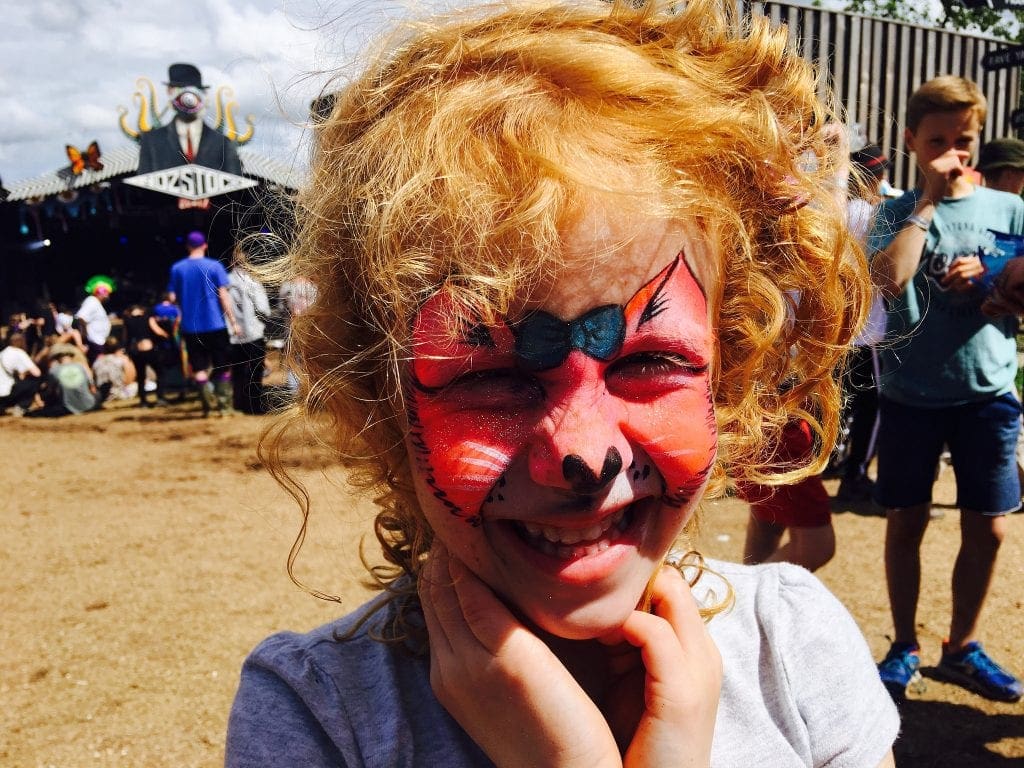 Yes I think some of us would. The festival is small and whilst the vibe of the festival is probably more grown up than I was expecting, families were definitely welcomed everywhere and it was easy to navigate and not too busy.

On balance though I think a festival that finishes its music set at 11 or 12 might suit most of us slightly better, than one that finishes at 3.30. An earlier finish might then give us  parents a little more time to sleep when the kids wake in a field at 6 in any event.

However that being said – if asked whether we would like to return next year I think my answer would be yes! I just might pray for sun! 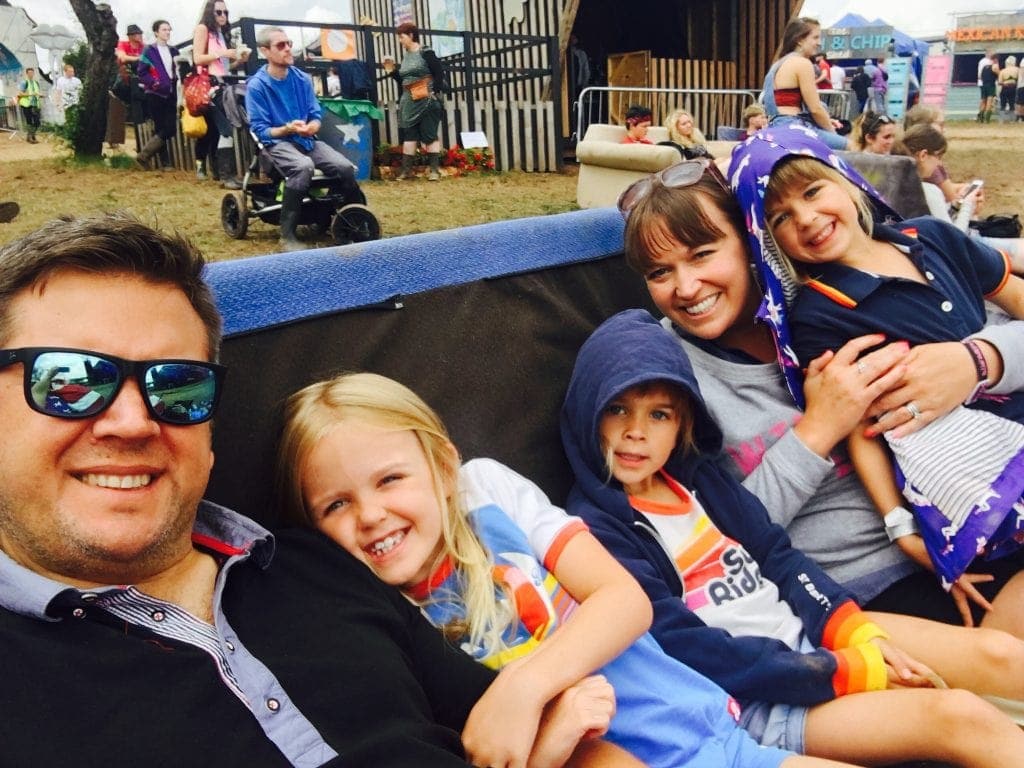 NB: We received complimentary entrance into Nozstock in order to review but all views and opinions are our own.

Sounds a really fun event (apart from the rain and 3.34am finish) It's just so good to be outdoors and enjoying yourself.