My husband, three children (9, 8 and 6) and I went to our first festival as a family when we went to Nozstock The Hidden Valley in July. The festival is on farmland in Bromyard near Worcester, with views of beautiful rolling hills and countryside.

One of the things that had put me off taking the kids to a festival before was the thought of lugging a tent and our thousands of bags for miles to find a camping spot (which had been my experience at other festivals I’ve been to). I needn’t have worried. We drove in on Saturday morning (we decided we could only manage one night camping), swapped our etickets for wristbands in about 30 seconds flat and were directed to the parking field. We were then a 50 yard walk from the entrance to the family camping area, set at the edge of the festival. My children could have spent the entire time in the family camping area playing with other kids, and on the climbing frame. On Sunday morning, our neighbours were doing yoga and invited us to join, and there was a lovely game of family football going on which Charlie and Ed loved. 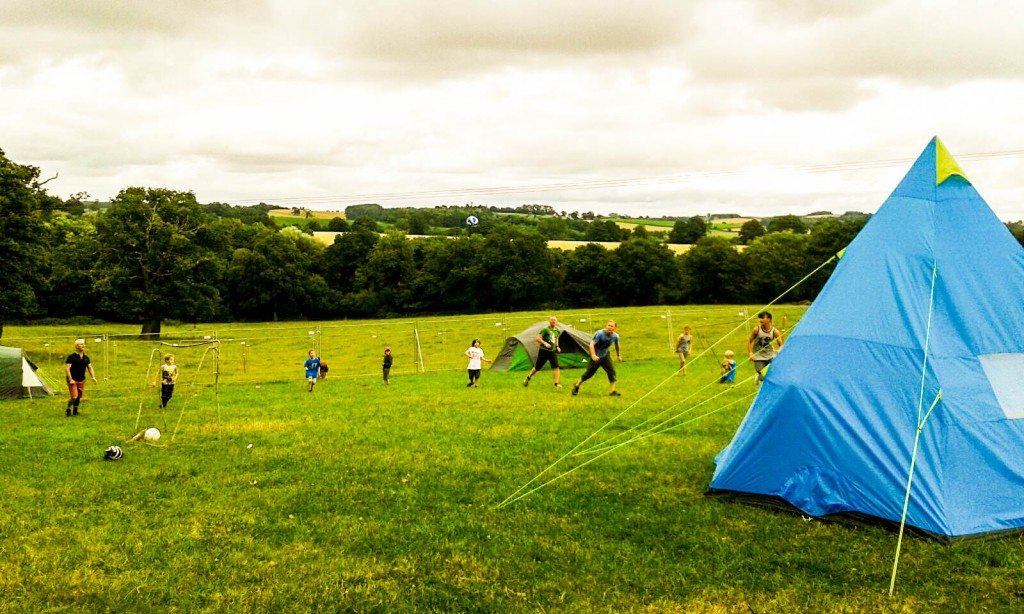 Having put up our tent (15 minutes, it’s fool proof), we headed into the festival with really no idea what to expect. The first field we came to was the children’s field. It had a stage and a bar at one end, and the music there was very easy to listen to. At either side of the long grassy avenue leading from the stage were an array of stalls and children’s entertainment. When we’d managed to prise the kids out of the hammocks by the stage, Ed and Charlie had a go at sock wrestling in a specially set up arena, which was hilarious! Next to that were people doing circus skills so the girls had a go with the poi, tried their hands at juggling and even a unicycle (bit of work needed there). The guys doing the circus skills were absolutely brilliant with the children and with the adults too – Ed and I both learned to hula hoop, which was one of the highlights of our weekend!! 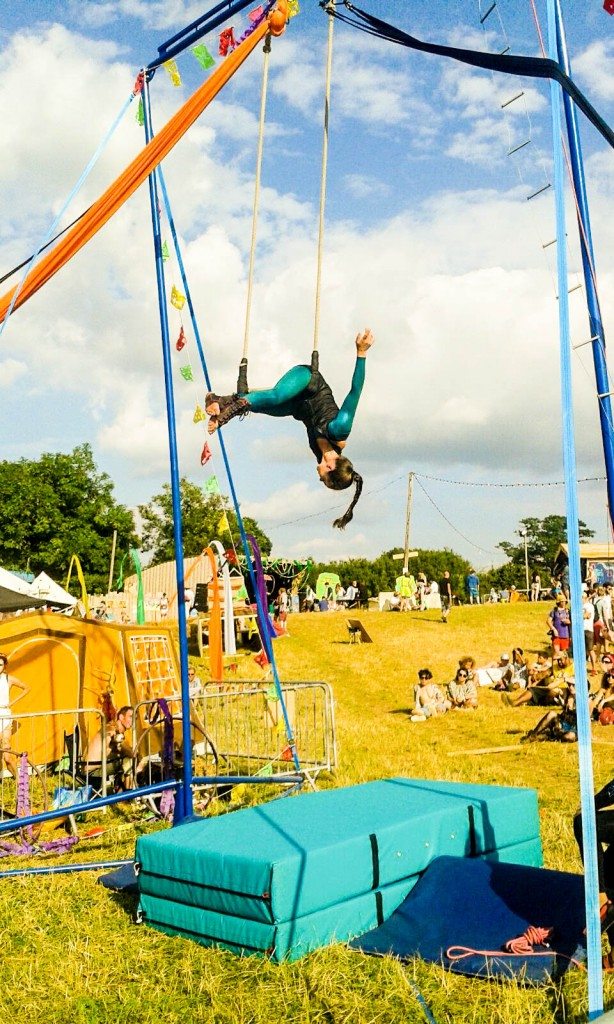 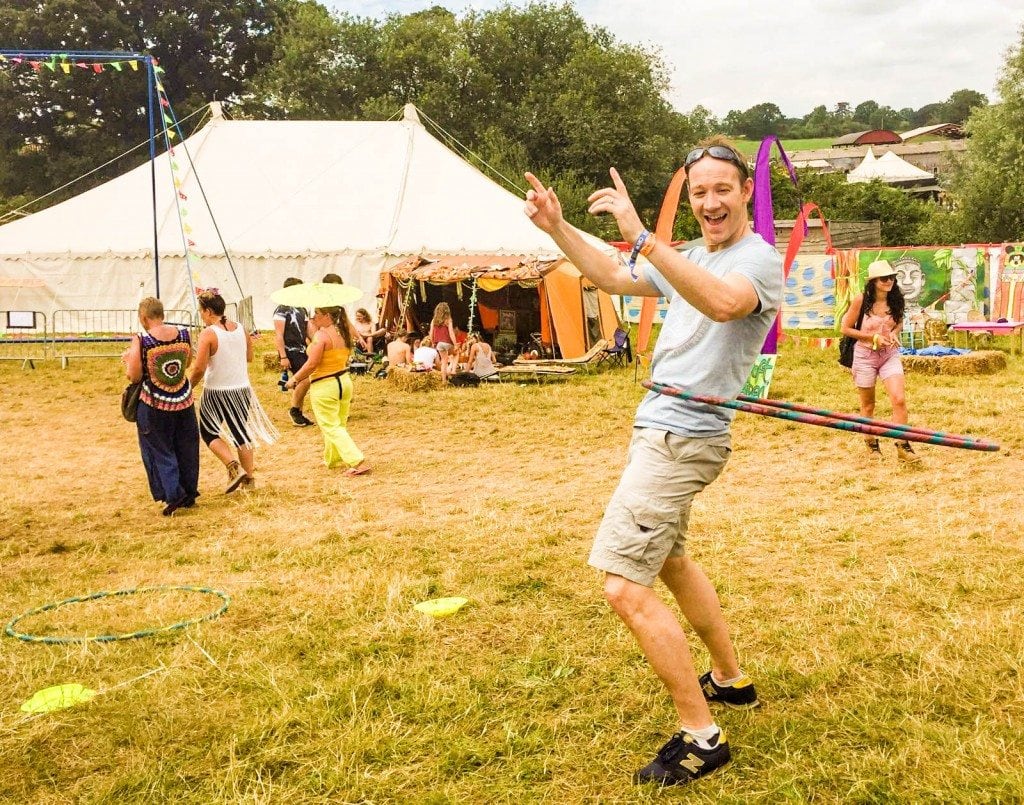 Another highlight was the open music tent in the children’s area, where the kids could just sit and watch, or experiment with the instruments or go inside and join the performance, playing the drums, trombone, flute, bongoes etc. I imagine the resulting noise would have been quite challenging if you’d overindulged the previous night, but the musicians in the tent were totally chilled out and great with the children. One guy repeatedly told us that Mimi is a natural on the drums – thanks for that! 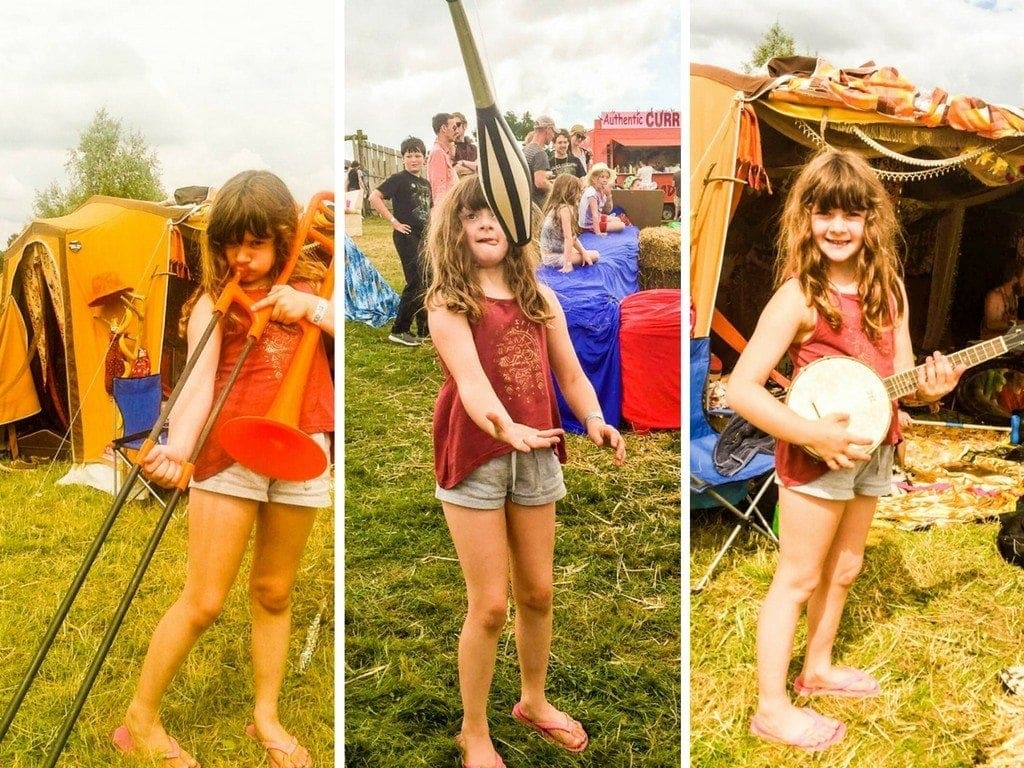 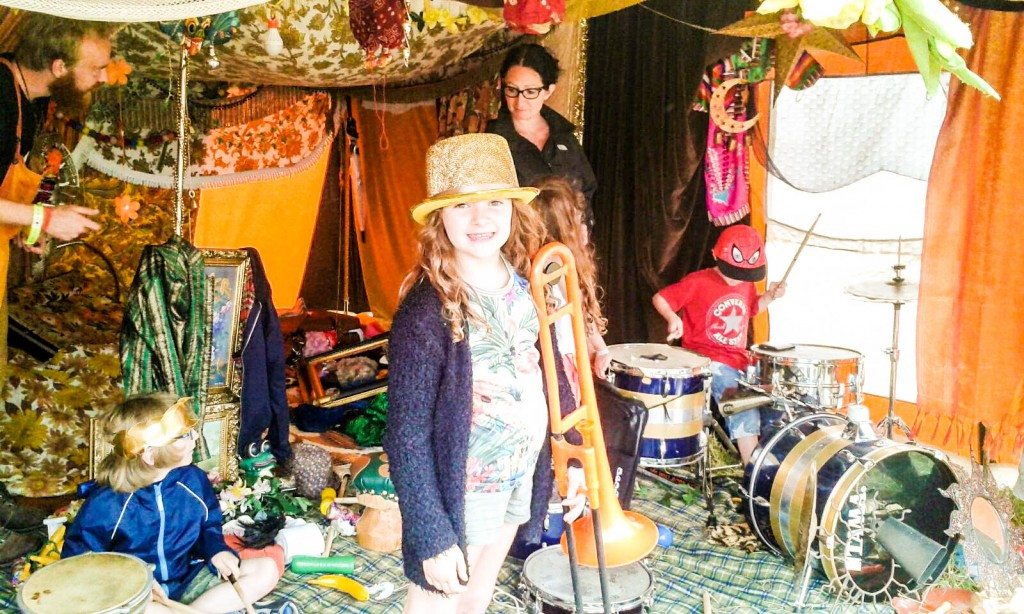 Opposite the music tent was a human fruit machine – three girls standing in booths with a selection of plastic fruit which they held up when the kids pulled down an imaginary lever in front of them. The girls seemed to instinctively know that the kids would be desperate to have a go themselves so they suggested it before they were asked and Charlie, Mimi and Rosie had a great time being the fruit machine.

Other stuff to do in the children’s field included various crafts (lanterns, Greek pots, festival skirts to name a few), glitter face paint (couldn’t resist), amazing acrobatic shows and a fabulous theatre tent with quirky shows all day long. There was also a cinema tent showing cartoons but there was way too much going on to be watching tv! 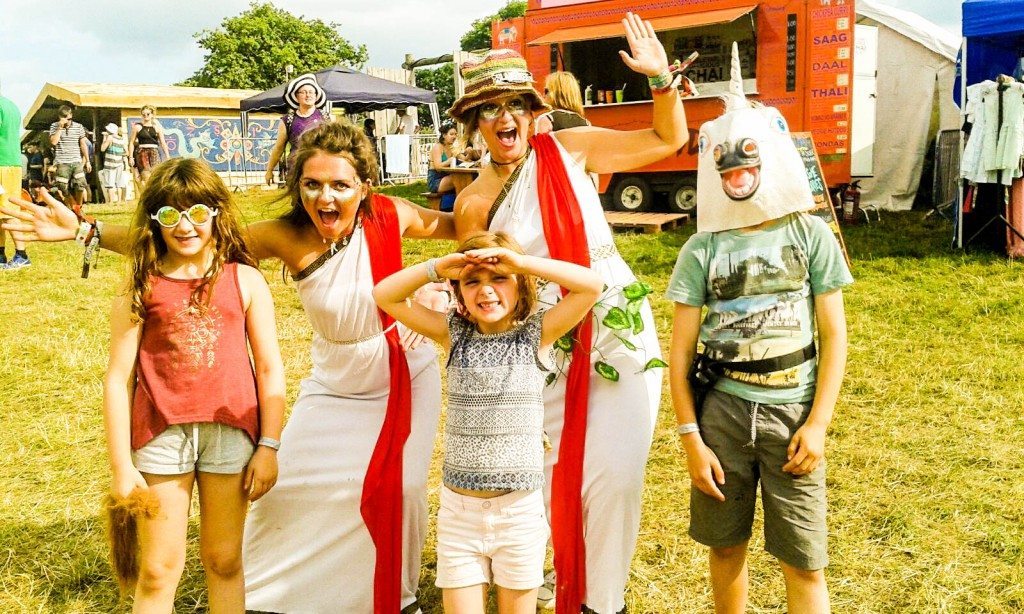 As we were wandering around, various artists came through the children’s area. They were clearly there to entertain but did it in a very relaxed and unobtrusive way. A few girls from Glitter Culture dressed in Greek costume with amazing glitter facepaint organised a brilliant game of catch the unicorn for the children. This basically involved Charlie donning a large unicorn head, while Mimi chased him down wearing a pair of crazy refraction glasses that made her see 10 of everything. Results were hilariously absurd. We also played another great game with them, which involved two of us putting the gusset of a pair of tights on our heads which had two tennis balls in each foot and trying to knock down bottles filled with water by swinging the tights from side to side. We’re planning to recreate this ridiculously entertaining game over the summer holidays!  A giant Zeus and his Greek gods meandered through at various points and chatted to the children and staged mock battles. 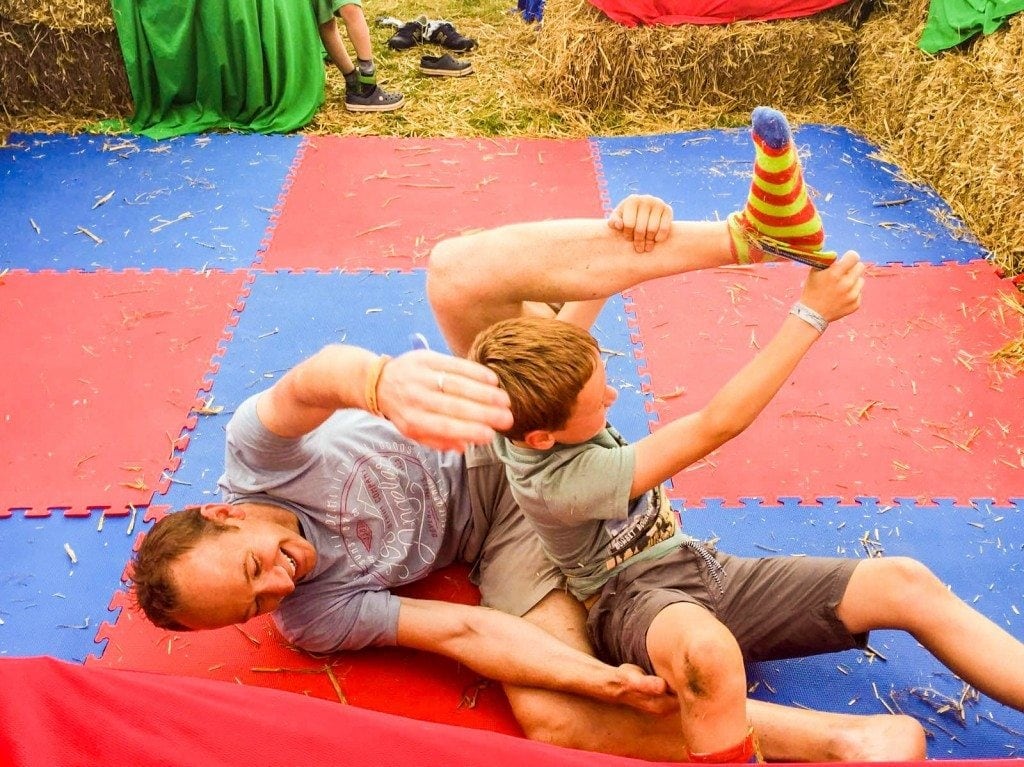 When we finally dragged the kids away from the music tent, we wandered through the rest of the festival. During the day, the main Orchard stage was a really nice place to be – there were no big crowds at all and we never felt like we might lose a child at any point. The same went for the other stages and for the brilliant DJ booth playing house music in the middle of a little wood at the bottom of a paddock. Old sofas were randomly dotted around the fields in front of each of the stages and people were generally just sitting, chatting and relaxing. There was a small food court above the Orchard stage with really fantastic food. We had wood fired pizzas which were cooked in front of us in less than 2 minutes and were huge and delicious. There were burritos and Thai food and curries and lots of vegetarian fayre. There was a beautiful old VW camper converted into an ice cream van which we all agreed sold the best ice cream any of us had ever eaten (including in France!). And everyone we met was super friendly and utterly charming. 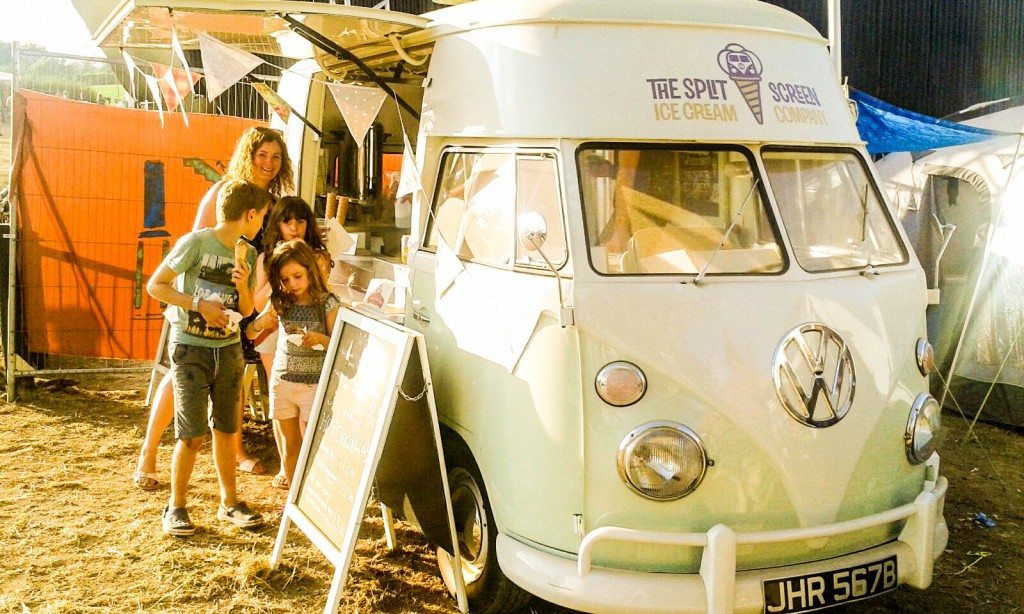 We had a boogie at each of the stages and in the rave tents, but the musical highlight was the Lost Cabinet of Secrets. This was a little shack in which there was a corridor with lots of doors leading off it. You had to solve a riddle to work out which door opened and when you got through it, you were in a room with a small stage. We watched a great acid jazz/funk band I can’t remember the name of and we all danced like crazy for a few songs, until Charlie announced he thought he may have had too much lemonade! 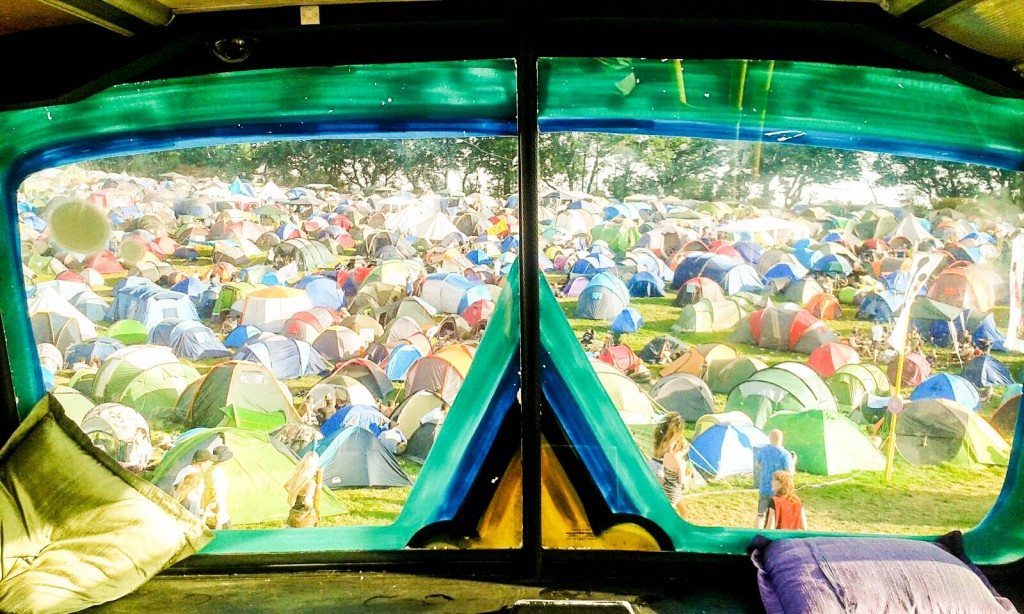 Rosie was about to flake at 11pm so we missed Jurassic 5 on the Orchard stage, as it started just after 11. Although the festival is really family friendly, it’s also clearly a hard partying festival as the various stages had acts on well into the early hours. When I woke up at 1.30am, dance music was still pumping out. It didn’t seem to disturb the kids at all, and it didn’t bother me either, apart from making me feel a little old….

Next to the Orchard stage was another field where you could try your hand at various different types of metalworking in little open air workshops. On Sunday, Charlie spent a happy hour with a brilliant guy making a steel hook – he was delighted to be able to help heat up the steel and bash it into shape. Rosie and Mimi made beautiful leaves from copper and Ed and I watched an impromptu hip hop dance off taking place on a little clearing behind the workshops. 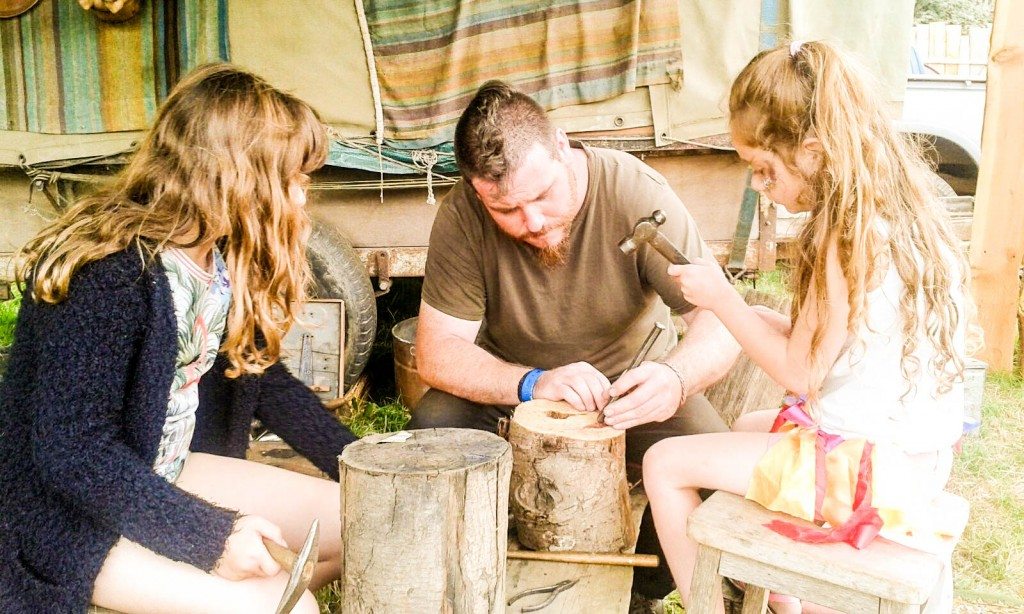 Although the festival was in its 18th year, I’d never heard of it and nor had any of the friends I mentioned it to. It quickly became apparent from talking to other festival goers that this is because they come year after year but don’t spread the word too much as it’s such a magical, authentic festival that they don’t want to spoil it. I almost didn’t want to write this review for the same reason,but came to the conclusion that we were lucky enough to experience the magic of this amazing festival and so it was too selfish to keep quiet!

We are booking for next year as soon as tickets come out and we’ll be going for 2 nights so we don’t miss a minute! 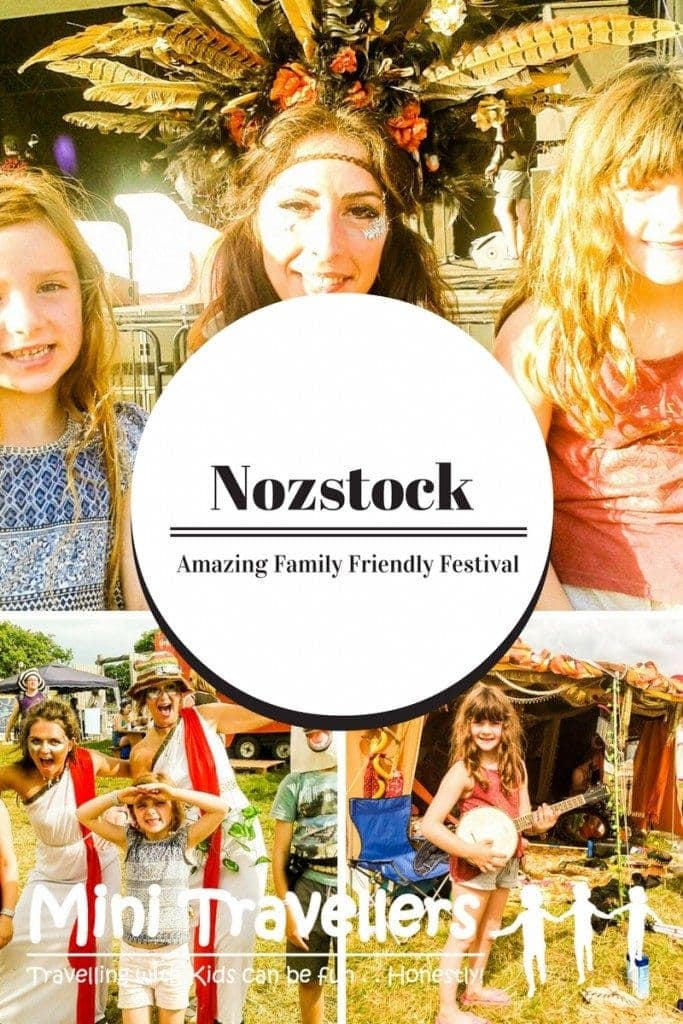 NB: Jane and her family received tickets in order to attend the festival but all views and opinions are their own.