This review has been written by Kathryn Grant who puts us at Mini Travellers to shame with this fantastic review of a road trip, showing travelling can be done with Mini Travellers in tow. Kathryn writes a great blog called Bumps and Grind which you can read by clicking here, and she tweets as @katgrant30.

We started our Summer Road Trip 2014 (TM) with the in-laws, in their rented holiday cottage near St Mawes, Cornwall.  In fact, we based the first continental leg of the trip on this location, choosing to take the long car ferry from nearby Plymouth to Santander in Spain (see here).  But first – to Cornwall! The final post on this journey can also be found here.

The drive: SRT2014 Stage 1, Sussex to Cornwall
After a lovely busy day spent with friends at their beautiful baby boy’s christening in Sussex (The Husband had one of the starring roles!), we got The Boy into his jim-jams, fed, and into the car seat with his bottle of milk at around 6pm.  Leaving at this time worked out really well, as The Boy slept most of the first half of the drive, waking as we approached our planned pit stop (Dorchester McDonalds).  The second half of the drive was less successful sleeping-wise, but at least the traffic was flowing (by now around 9pm driving through Devon) and we got to test out the iPad seat bracket /toddler entertainment system we had jerry-rigged for him (successful).
The Cottage
I’m not going to give away the exact identity of this small hamlet and row of prettily thatched farm cottages – it’s a well-kept secret and we intend to keep it! 🙂  It is nestled amongst hilly farmland on the Roseland Peninsula, across the bay from St Mawes and above a well-hidden beach, reached only via precarious cliff paths and ropes.  The farm, and many of the surrounding cottages, are now owned by the National Trust. We arrived late at night, but already the contrast with central London was clear: the bright starry sky, the owls hooting… We could not ask for a more peaceful setting.
The best aspect of this tiny two-up, two-down cottage was that once you closed the gate to the cottage path, it was completely enclosed and safe for The Boy to run around.  He could run in and out of the four cottages, up a few steps to a huge garden and orchard, all backing onto a ready-to-be-harvested barley field.

The Boy was in heaven, and we barely felt the need to ferry across to St Mawes itself (we did once or twice, just for the fresh saffron buns and pasties!).  We sat in the garden, watching The Boy run and play (he had not only one set of grandparents, but also some dear family friends and a neighbour’s kindly border terrier).  We let him run wild.  We indulged his fascination for tractors by letting him watch the harvest “up close”. 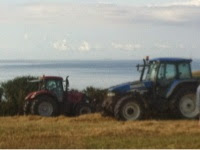 The Beaches
If the North coast of Cornwall has the surfing and Rick Stein, then the south side has the unspoilt beaches. We visited several along the peninsula, but one in particular stands out: Porthcurnick Beach, with the “as featured on TV!” Hidden Hut (see its website here: http://www.hiddenhut.co.uk/ ).  The swimming was bracing, but the waters crystal clear and inviting.  The Boy splashed in up to his knees which was a great start.  We dried off and headed up the cliff steps to the Hidden Hut: essentially an outside catering unit, serving delicious, freshly prepared food to the beach crowds.  It wasn’t cheap, but then we are so accustomed now to trendy London street food, £9.50 for a delicious Goan Seafood Curry didn’t strike us as unusual.  We were glad to have ordered our food early (lunch is served from noon) as by the time we were tucking in, the queue was snaking around the tables and perilously close to the cliff edge.  With The Boy now happily napping, we lingered a while before strolling back to the car.

Trelissick Gardens
A quick note – we did make use of our new National Trust membership status in Cornwall, but only the once!  With The Husband nursing a toothache (don’t ask: long story that begins with a root canal during our honeymoon), I took The Boy for a mother-and-son day out at nearby Trelissick House and Gardens.  It was a forty minute drive, including a ride on the King Harry Ferry (a simple “floating bridge” chain ferry – with spectacular views up and down the Fal estuary).  Trellisick itself (the little of the grounds I actually saw while managing a hungry and petulant toddler) was lush and elegant.  In a year or two’s time I can imagine us happily stomping around the well-marked “woodland walk” (around 4 miles according to the map).

The Verdict
The Husband and I agreed that Cornwall was just the start to SRT2014 we needed: peaceful and relaxed for us, but a wild adventure for The Boy.  He spent all day, every day, outside running around, often in the company of adored friends and relatives.  We ate well, slept magnificently (hardly any TV and absolutely no traffic noise!) and felt all the better for it.  Ready to pile back into the car for Stage 2. Read stage 2 here.
Click here to cancel reply.

Brilliant review! We've been to Cornwall last week and we all love it there...definitely going back.

thank you we would love to host any of your reviews if you were interested, we always link back to other blogs