This review has been written by Kathryn Grant who puts us at Mini Travellers to shame with this review of a cruise from Plymouth to Spain which is part of a long road trip (click here to see the journey from Spain to Italy), showing travelling can be done with Mini Travellers in tow. Kathryn writes a great blog called Bumps and Grind which you can read by clicking here, and she tweets as @katgrant30.

They have a reputation for garishness, vulgarity, obesity and premature aging.  But, to be honest, the thought of a cruise has always been quite appealing to me: cocktails in the lounge, strolls around the deck, dinner at the Captain’s table, and all the time in the world to while away.  What could be so awful?  Sadly, this same concept is The Husband’s idea of hell on earth: norovirus-y, vomit-inducing, captive, claustrophobic hell.  So I’m not getting my cruise any time soon.

But wait!  What’s that you say?  There’s a 20 hour car ferry crossing from Plymouth to Spain?  On a huge ocean-going vessel with cabins, restaurants, swimming pool, and entertainments?  We are IN.  The Husband didn’t even hesitate: here was a way to satisfy his wife’s longing for some sort of cruise, while also getting us to the continent relatively easily.  And it was only 20 hours, so if it all turned into his idea of Hell he’d (probably) cope.
After our lovely week in Cornwall, we made the short trip to Plymouth.  The queue of cars waiting to board the Brittany Ferries ship gave us an idea of its scale.  It took several hours to get everyone on (apparently this is an exercise in brain and computer power, involving several complex algorithms to decide exactly which vehicle needs to be stowed where on the THREE car/freight decks).

Once on board, we headed straight to our cabin.  Sadly, this wasn’t in the “Commodore” area (complete with double beds, complimentary fruit baskets and private balconies) but we did have a “large 2/4 berth” which was spacious enough for being in a boat, and had a surprisingly normal ensuite shower and WC.  We both had comfy pull-down single beds – The Boy in a specially-provided travel cot between us.  There was even room for two more bunks above us (although if these were occupied the cabin would have felt seriously on the small side!). 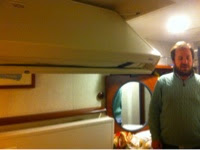 Ok, enough of the cabin.  What about the rest of the “Pont-Aven”?

Well – The Boy and I were giddy with excitement.  He was running up and down the corridors shouting CHOO-CHOO TRAIN!!! at the top of his voice, completely oblivious to the fact he was on a boat.  We went for a good walk (run!) around the main passenger areas, spotting: a soft play room, numerous highchairs throughout the cafes and restaurants, delicious looking pastries (all the catering and staff onboard were French), a glass fronted atrium, small swimming pool, piano bar, beauty spa, cabaret lounge, and more… 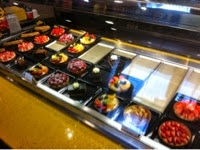 Glancing at the prices, I noted they were remarkably reasonable: £3.95 for the “cocktail of the day” (a punchy Caiparinha) for example.  While the self-catering option looked fine (pizzas and panini based), we followed those-in-the-know to the reservations queue for the main restaurant.  At £25.90 for a buffet starter, main course, buffet dessert and cheese, it was justifiably popular.  Choosing the early 6.30pm sitting, I even managed to procure us a window table.
This left us just the right amount of time for some children’s entertainment (including an introduction to ship’s mascot Pierre the Bear), a drink and a wash before dinner.

Dinner did not disappoint.  The French know how to lay-on a buffet and to be honest if you had ordered the alternative a la carte starter and dessert you would have been disappointed!  I crammed my starter plate with pate, salami, salads, stuffed peppers, ceviche, souffle and more.  The Husband went wild on the fresh langoustines.  Main courses were less exciting, but just a prelude to the jaw-dropping dessert table.  Here, I initiated a colour-coordinated “wheel” of tastiness. 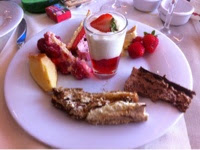 Dinner and an early night were quite enough for us, but if you had the energy you could have been entertained all night long with singing, magic, bingo, more singing, and a disco.
The next morning there was still plenty of time for strolling around the outside decks, and even some dolphin (or were they pilot whales?) spotting across the Bay of Biscay.  We also made good use of the soft play room.  Looking around our fellow passengers, we remarked just how many (the majority?) seemed to be other young families off on their holidays. Of the retired people onboard, most seemed to be grandparents attached to an extended family group.  It certainly all felt much more like Disney than Saga. 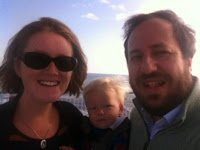 We arrived on time in Santander, waved goodbye to the Pont-Aven and vowed to come aboard again soon.  What a great, alternative, way to reach Spain! 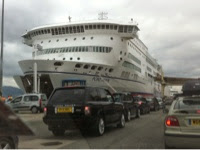