So, instead of our usual route to Italy (Old Kent Road, channel tunnel, France/Belgium/Germany/Switzerland) we found ourselves in the Basque region of northern Spain.  The plan now was to spend some time in San Sebastián, before making our way down the French (autoroute) side of the Pyrenees, a further stop in the Languedoc/Provence region, and then drive all along the South coast of France until we hit Italy.

Incidentally if you are driving through France then at around 2.5 hours from Calais, Reims is a perfect town to stop at with kids – either if you’ve had a a long pre-ferry/Eurotunnel journey already and can’t face another long drive, or if you are returning from further afield in France and need to stop before continuing on to the UK. You can read why in Dais Like These post on 24 Hours in Reims with Kids.

San Sebastián
This was a place we had been keen to savour for some time.  As a pair of food buffs we had heard tales of Basque cooking and the amazing seafood and tapas (“pintxos”) to be enjoyed.  Perhaps we should really have made it here prior to The Boy’s arrival, but hey he loves a tapas bar crawl as much as the next one year old, so he was very much along for the ride.

We stayed at the NH Aranzazu hotel, near the Onderetta beach.  A quick word on the NH chain of hotels: they can be found in many large European towns, and we would highly recommend them.  We have stayed in four different ones now (Budapest, Turin, Seville – and now San Sebastián) and they have all been immaculately clean, well located, spacious, and hugely generous with their breakfast offerings.  I believe they are operating in the same mid-upper price bracket as Mercure, Novotel and Holiday Inn.

San Sebastián is an easy city to navigate.  There is one main road into the commercial centre, which also takes you straight to the beach and sweeps along the bay front to the old town.  The beach was a revelation.  I had heard so much of San Sebastian’s gastronomy, I hadn’t realised it also boasted one of the best city beaches in the world.  The town occupies a sheltered bay (complete with island), and along the entire shoreline is a wide sandy beach.  There must be at least a mile of sand to enjoy, with certain areas marked out especially for families, serious swimmers, boaters, surfers, etc. 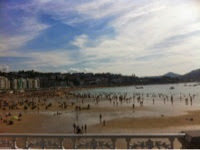 Our hotel was very near the western edge of the Ondaretta stretch of beach, which is deigned for families: parasols and deck chairs, snack bars, play equipment, showers, and a full lifeguard station.  Once we managed to drag The Boy away from the choo choo train  climbing frame, he quite enjoyed dipping his toes in and jumping over the gentle waves.  The Husband and I took turns having a proper swim, and I loved the liberation of a sea swim in warm waters with the comfort of a lifeguard nearby.  A quick rinse in the communal beach shower and we were ready to saunter along the promenade towards the old town and its famous bars.

Perhaps it was our sky-high expectations but I actually felt a tiny bit disappointed by our (first) pintxos experience.  They looked amazing, a huge array laid out over an old-fashioned bar, but clearly they had been on display for some time – so the Serrano-wrapped prawns, morcilla, croquettes and other delicacies were all stone cold.  My advice?  If you don’t have responsibility for a restless toddler, then relax a while and prop up the bar with a cold cerveza – then nab the best-looking plates as soon as they appear from the kitchen.

Our second day (we stayed three nights in total) was more successful: we had booked lunch in a neighbouring town, upon a friend’s recommendation.  El Kano, in Getaria, is a seafood restaurant, employing the traditional barbecue grill that is typical of the region.  Getaria itself is reached via a spectacular coastal road from San Sebastián – and, although much smaller, has its own beaches and winding old town to explore.  Our lunch (and subsequent ice cream) here was great, and really gave us a feel for Basque food (in particular, hake “neck”).

Carcassonne
We chose to break our journey south with two nights at Des Trois Couronnes in Carcassonne.  We chose this hotel primarily for its secure underground parking, on-site restaurant, and small swimming pool.  The room was much smaller than at the NH, but perfectly serviceable.  We made good use of the pool, and the restaurant. 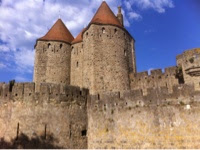 Carcassonne is famous for its medieval walled city, and it really is impressive.  It is also well known for its cassoulet, a homemade version of which is served at even the most basic of restaurants.

But don’t bother trying the “renowned” creperie La Ble Noir – unless you happen to have made a reservation.  I was prompted to write my first-ever Trip Adviser review after we were turned away (from a completely empty restaurant) when we only wanted a very quick bite.  I don’t know, I respect their reservations policy, but aren’t crepes “fast food”?!  We left, shaking our heads at the French, their attitudes towards tourists, and their precarious economic productivity…
Domaine Des Clos
Onwards, to somewhere completely different.  We found this hideaway about five years ago, on the way back from an earlier road trip, around Corsica and returning via the Marseilles ferry.  Domaine Des Clos is a renovated provencal farmhouse, between Beaucaire and Bellegarde, near the attractions of Nimes, and the Carmargue (think: lavender, lace, Provençal herbs, white horses and flamingos!).
Des Clos offers utter peace and quiet (if you don’t mind a background hum of crickets), and a complete escape from the world.  It is charming and rustic enough, without being kitsch.  It is neither a B&B, hotel or collection of gites – but incorporates the best elements of these all.  That is, you can enjoy a delicious breakfast laid on in the beautiful converted stable block, while also having your own kitchen and dining room.  You can enjoy the inviting swimming pool in the company of other rampaging toddlers, while also finding quiet spots in the extensive grounds all to yourself.  The grounds are completely safe (there are even child-proof locks on the swimming pool fence), and you can even find a trampoline and sandpit.  Twice a week (in July and August) you can join in the fantastic “table d’hote” cooked by owner Sandrine. 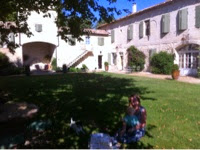 It is just a lovely, welcoming, place to escape with a young family.
We felt completely rested after three nights here, and ready to tackle the drive along the French Riviera towards Genoa. Unfortunately, by this point, we were racing to get The Husband to a dentist (long and boring story) so we could only just clock the famous place names as we passed along the winding autoroute: Cannes, Monaco, Nice, Monte Carlo, Cap D’Antibes.
This review has been written by Kathryn Grant who puts us at Mini Travellers to shame with this fantastic review of a road trip, showing travelling can be done with Mini Travellers in tow. Kathryn writes a great blog called Bumps and Grind which you can read by clicking here, and she tweets as @katgrant30.
Click here to cancel reply.

Where did you get your info from?