Beautiful holiday cottages that sleep 12,  aren’t in the South of England and are stunningly renovated yet child friendly are few and far between, believe me I know, I’ve looked.  Add to those requirements, a cottage that is dog friendly and you’ve really not got that many options. Cambrian House however is a stunning large holiday cottage in Criccieth, North Wales that sleeps 12, accepts two well behaved dogs and has been recently renovated and decorated in a beautiful contemporary style. A great deal of thought and attention has gone into every aspect of the design and the fixtures and fittings are just stunning.

The website for Cambrian House is really worth a good look at. You can see how much attention to detail has gone into the decor in each room, but I’m not sure even the website gives you a really good idea of the scale of the house. It’s huge. All the rooms, save for the bunk room, are a really good size and most of them have en-suites too.  Two of the downstairs rooms even have space for their own lounge area. 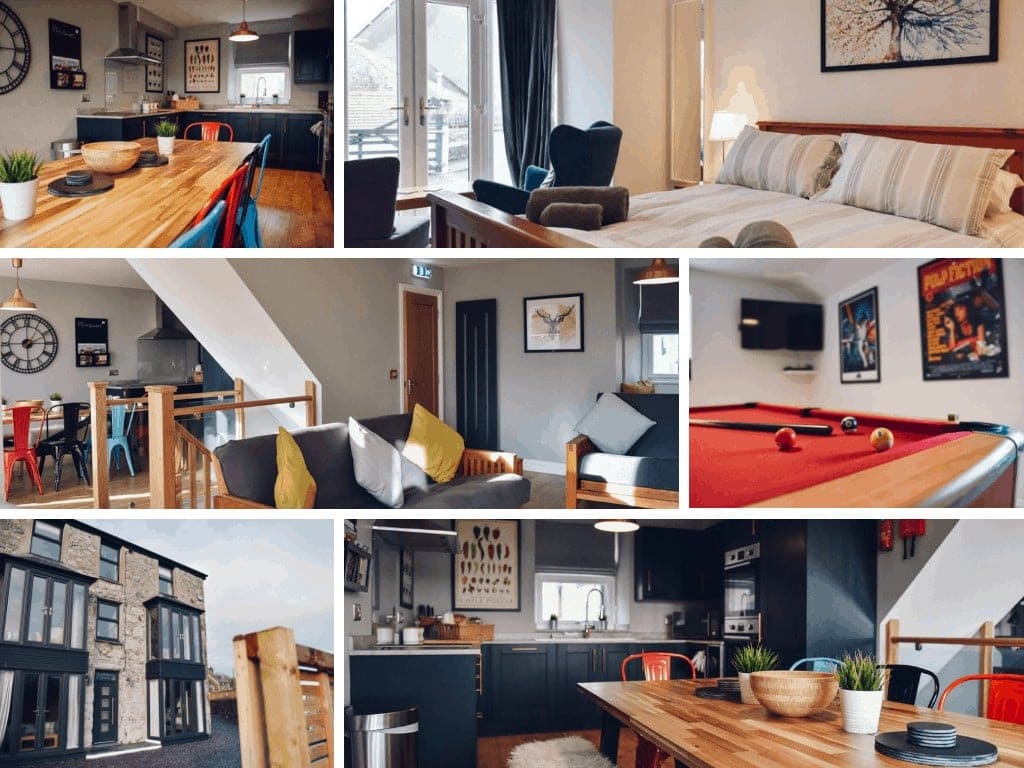 Sadly we only had a weekend to spend at Cambrian House rather than a week, but we made the most of our time there. We arrived after school on Friday evening with us driving down from the Wirral and our friends driving from Manchester. We all arrived around 7.30pm and easily got access to the house due to the detailed instructions we had had received from the owners. The kids exploded into the house and helped (ish) unpack the car. There was squeals of excitement about who was going to sleep where and which kids were going to sleep with which friends and as they all did that I opened the wine, put the curry in the oven to heat up and caught a glance of the Castle lit up from the front window.

The kids were far too excited to go to sleep early, and so before they discovered the fact that the large Smart tele in the front room would play you tube and Netflix, we played a large game of cards round the huge dining room table. 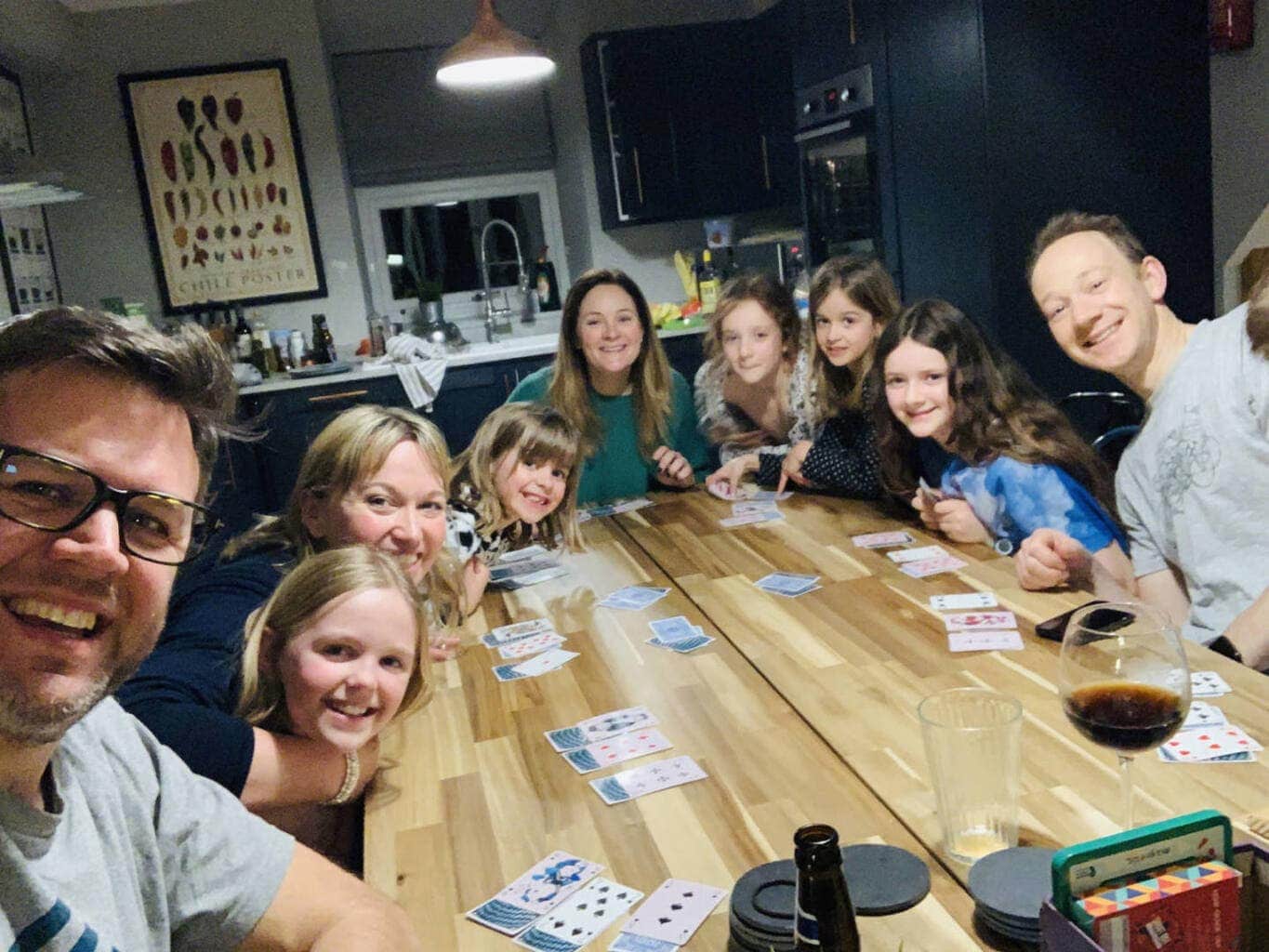 We are all huge fans of that favourite travelling game S***head which has been renamed Shed for the younger members of the family. If you haven’t played it with your kids yet you should give it a ago if you can remember the rules. It’s not that different to Uno if you think about it.

Anyway back to the house! After the kids had finished cards, a bit of tele and the first of many games of hide and seek they went to bed, 2 on the top floor, 2 in the bunks and the 2 older ones claiming a bedroom each on the bottom floor.  We then set about the serious business of finishing off a little too much wine and debating the new world order post Brexit. Well something like that anyway! 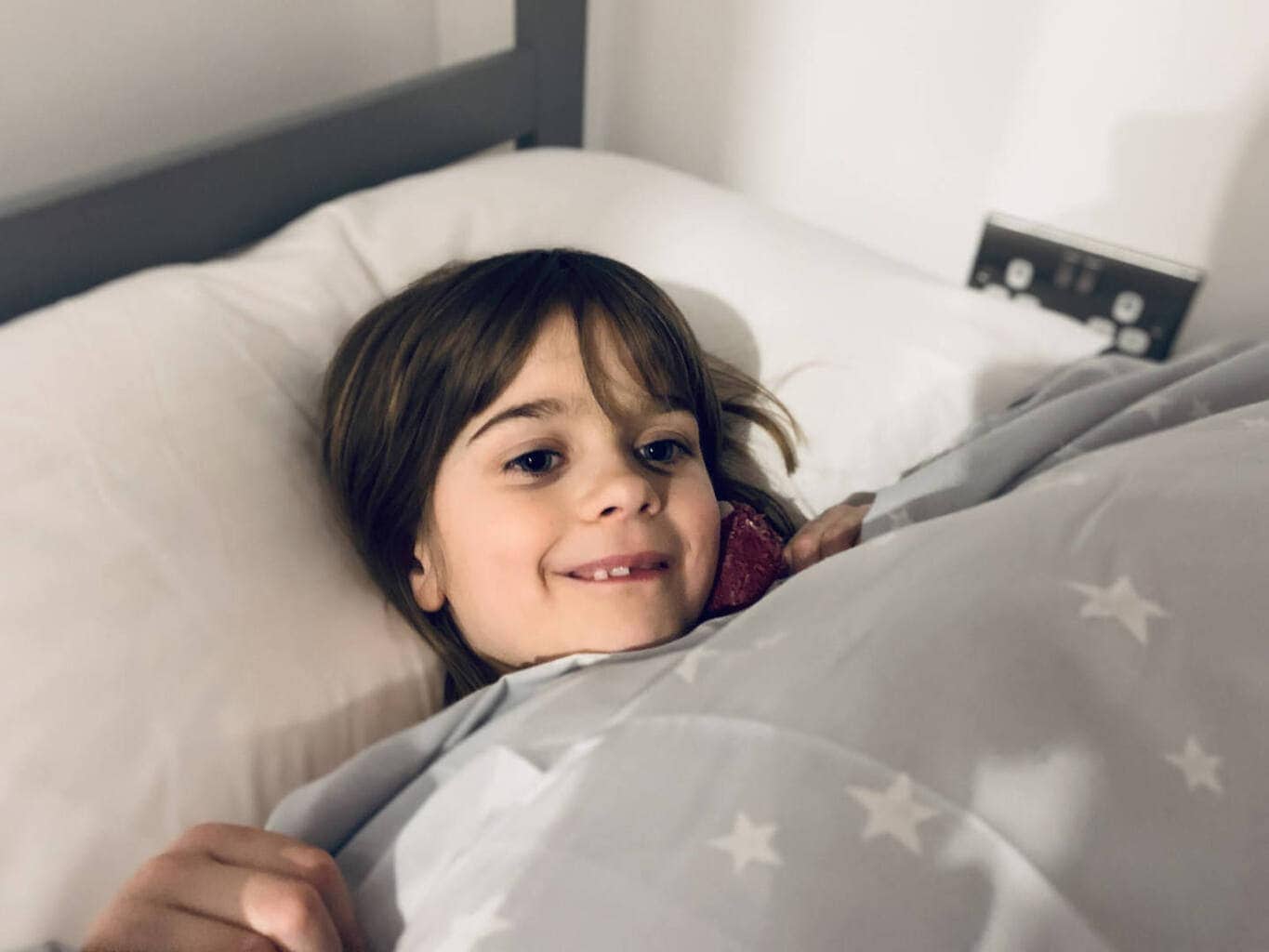 We all awoke early in the house, not due to any issue with the comfort of the beds or the thickness of the curtains (both were fantastic) simply because all the kids were excited to be away together and couldn’t wait to get out in the rain for a walk (or at the very least they wanted to watch the huge tv!).

The weather app told us that the best weather for the weekend was going to be between 9 and 12 on Saturday morning so we had bacon butties and coffee and bustled them out of the house and down to the beach, less than 5 minutes away. It’s so close in fact that two if us went back at different times for things we had forgotten. It’s the perfect location for large families as how often have you got to the beach and one of the kids announces they need a wee/water/snack etc.

Criccieth if you don’t know it is a good mixture of old fashioned Welsh seaside resort with a bit of Abersoch finery thrown in for good measure. There is a lovely new deli on the High Street and Dylans Restaurant on the beach which is widely acclaimed, but there is also a good old fashioned chippy and various shops that sell seaside tat that are well needed too.  Add into that mix, the Castle, which stands proud over the town and you have a wonderful seaside town  – in fact The Times described it last year as the kind of place you’d like to call home.

We spent a good 90 minutes on a very empty beach and the sun even came out for a bit too. 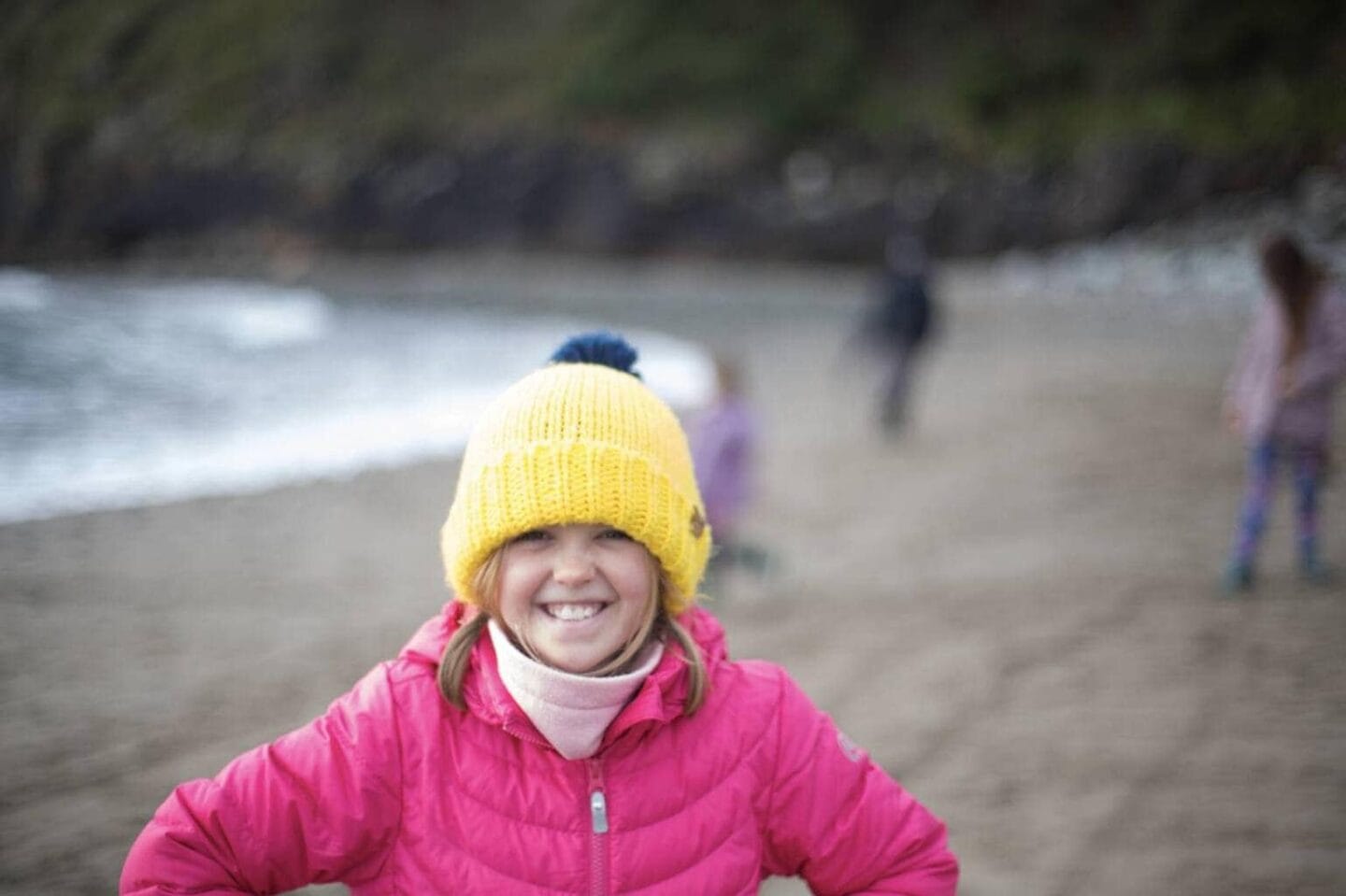 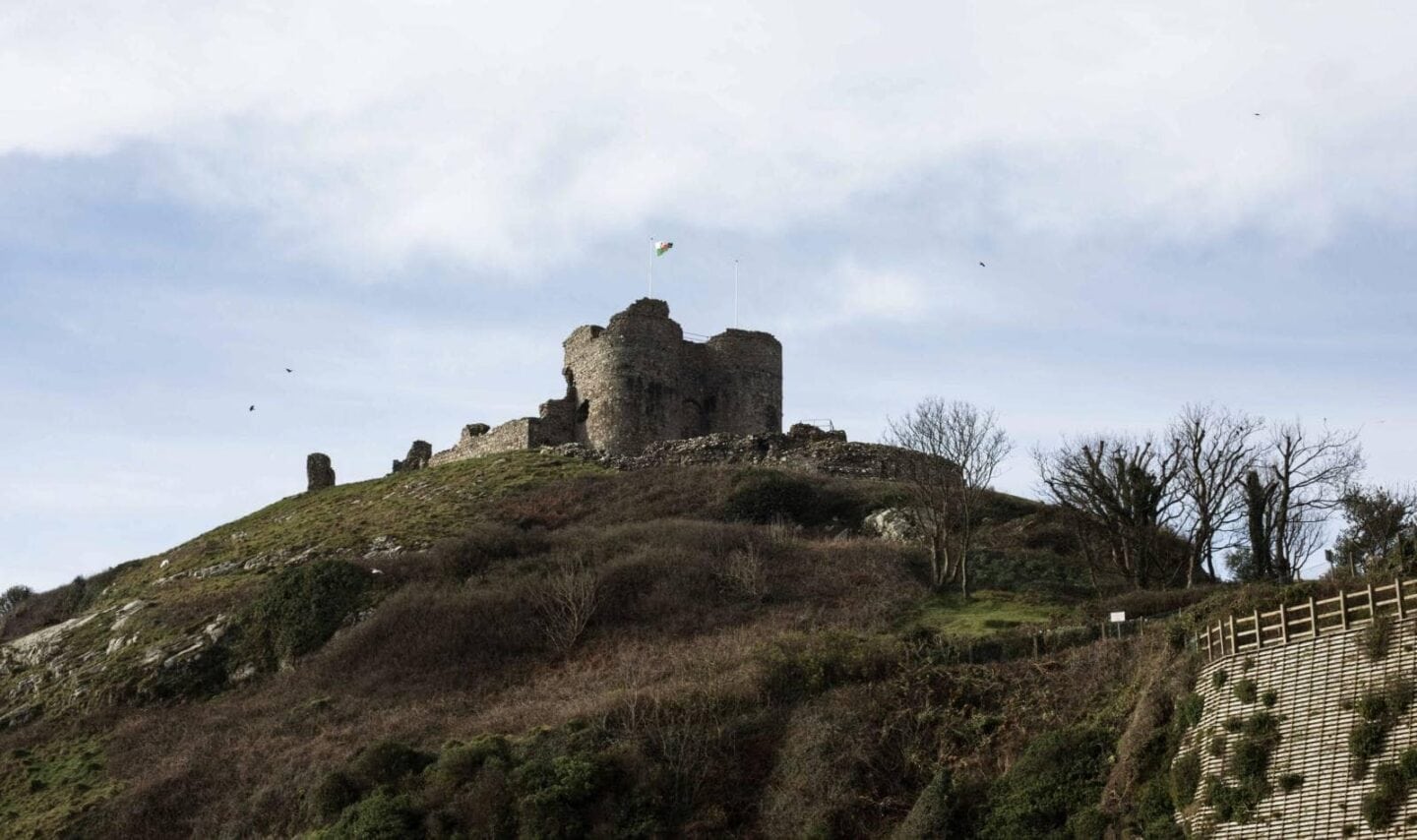 After the beach we walked another 5 minutes up the hill to Criccieth Castle itself. It’s a very derelict Castle but they do have quite a decent interactive display in the reception area that’s pretty new which has lots of buttons to press and stories of how the English and Welsh fought a lot.  It doesn’t take much longer than 30 minutes to explore Criccieth Castle, particularly when the rain starts but it’s not expensive to get in either at only £16 a family.  The views from the top of Criccieth Castle are pretty spectacular and the views of the rain rolling in were pretty amazing.

As a treat for time on the beach and satisfying my Castle urge we had promised the kids a treat in Cadwaladers (another reason on its own to head to Criccieth).The waffles and sundaes are in the words of the kids ‘epic’ so epic in fact that three of them couldn’t finish them. We did a good job of helping but still we were defeated. I would have suggested they shared them as we did see how big they were but life is sometimes too short for those negotiations. 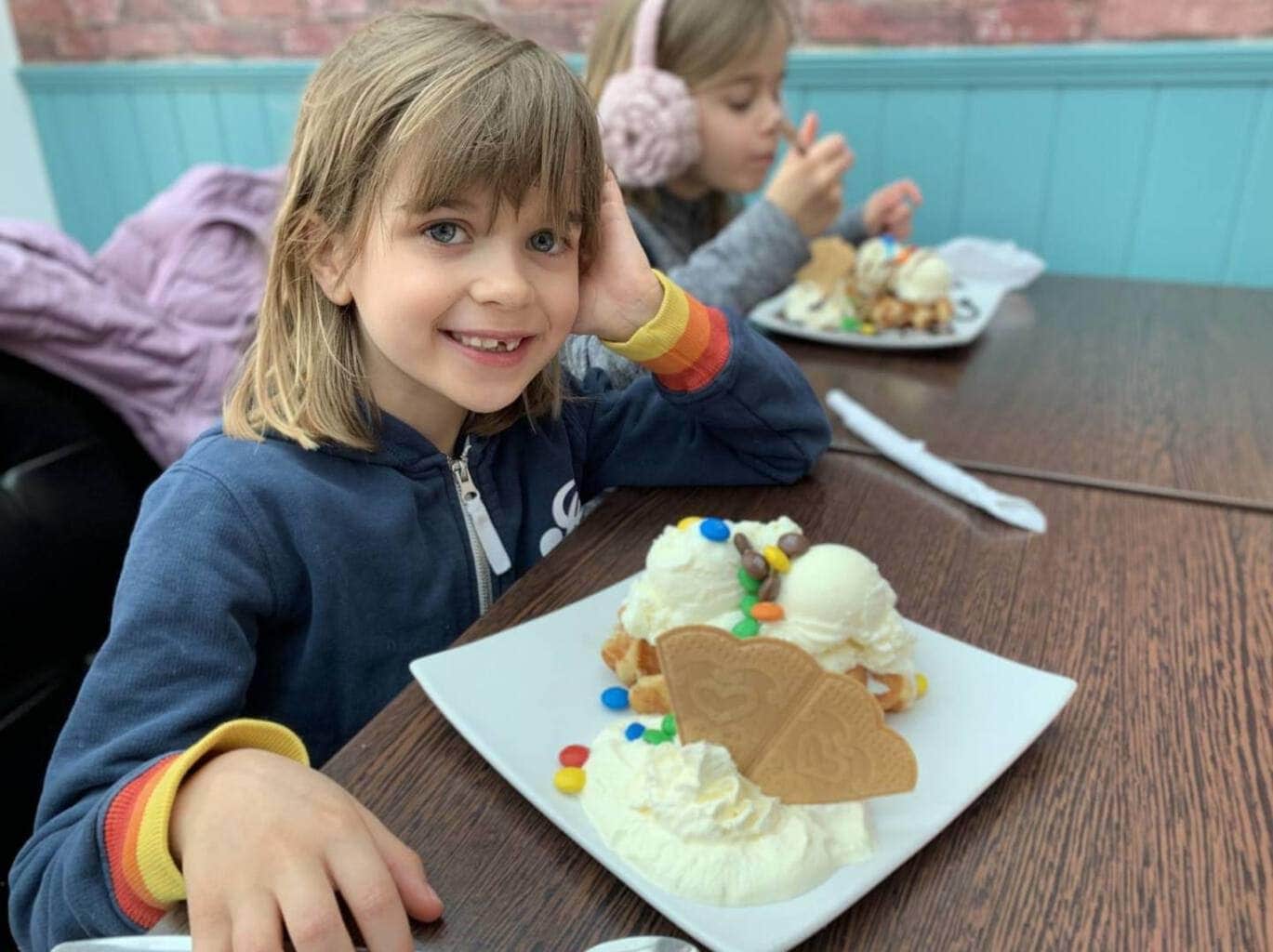 The weather app had promised us torrential rain for the rest of the afternoon so we made our way back to the house with the intention of making the most of the house and some time doing not very much. We even bought a jigsaw on the way home for a bit of afternoon mindfulness.  So we set about playing boardgames, snooker and cards but the rain didn’t look like it was going to come so we decided to drive down to Black Rock Sands knowing that if the rain did come in we could simply drive off the beach and head home. 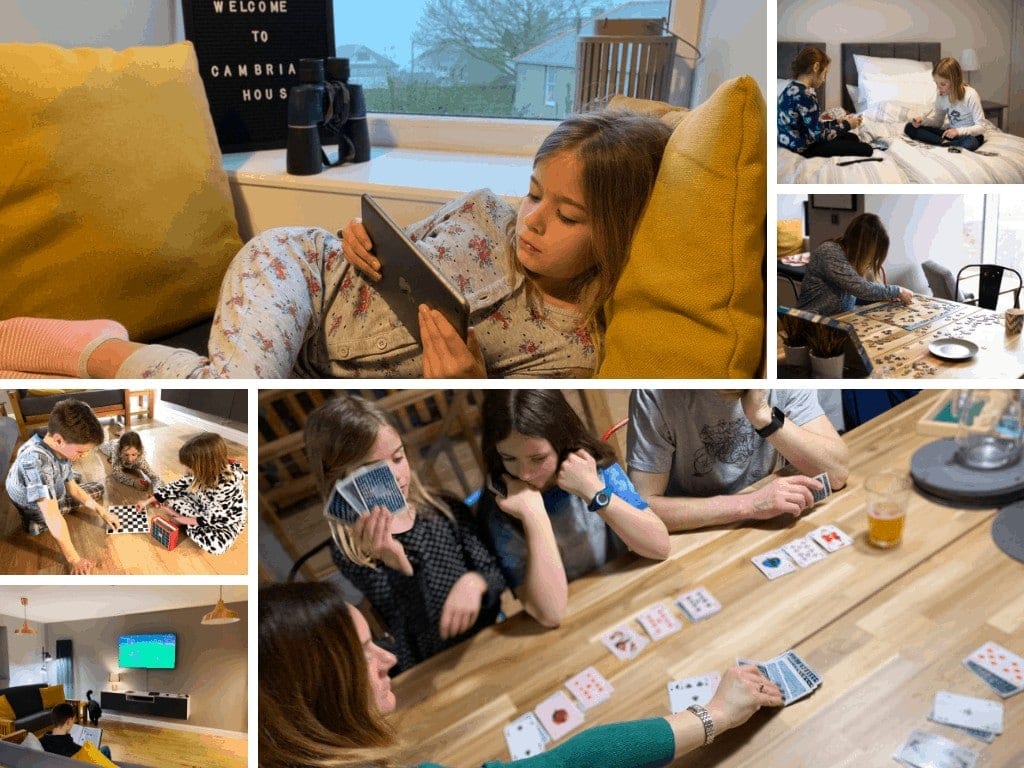 We had only been to Black Rock Sands before once a long time ago, back when we stayed at a Farm stay near Pwllheli and there was a heatwave. The photos from our day back in 2013 are slightly different if you want to take a look here.  Black Rock Sands is a huge open beach where unusually, you can drive onto the beach so it’s a really popular spot not just for picnickers and sandcastle builders, but also for motor boats and water bikes which have a special zone designated for their use.

The kids and the dog loved running up and down the beach and we took full advantage of having lots of space. We maybe got about 10 minutes before the torrential rain that was promised actually arrived but being British and having packed for the weather we didn’t let that put us off. We persisted for quite some time before giving up and returning to the warmth of Cambrian House. 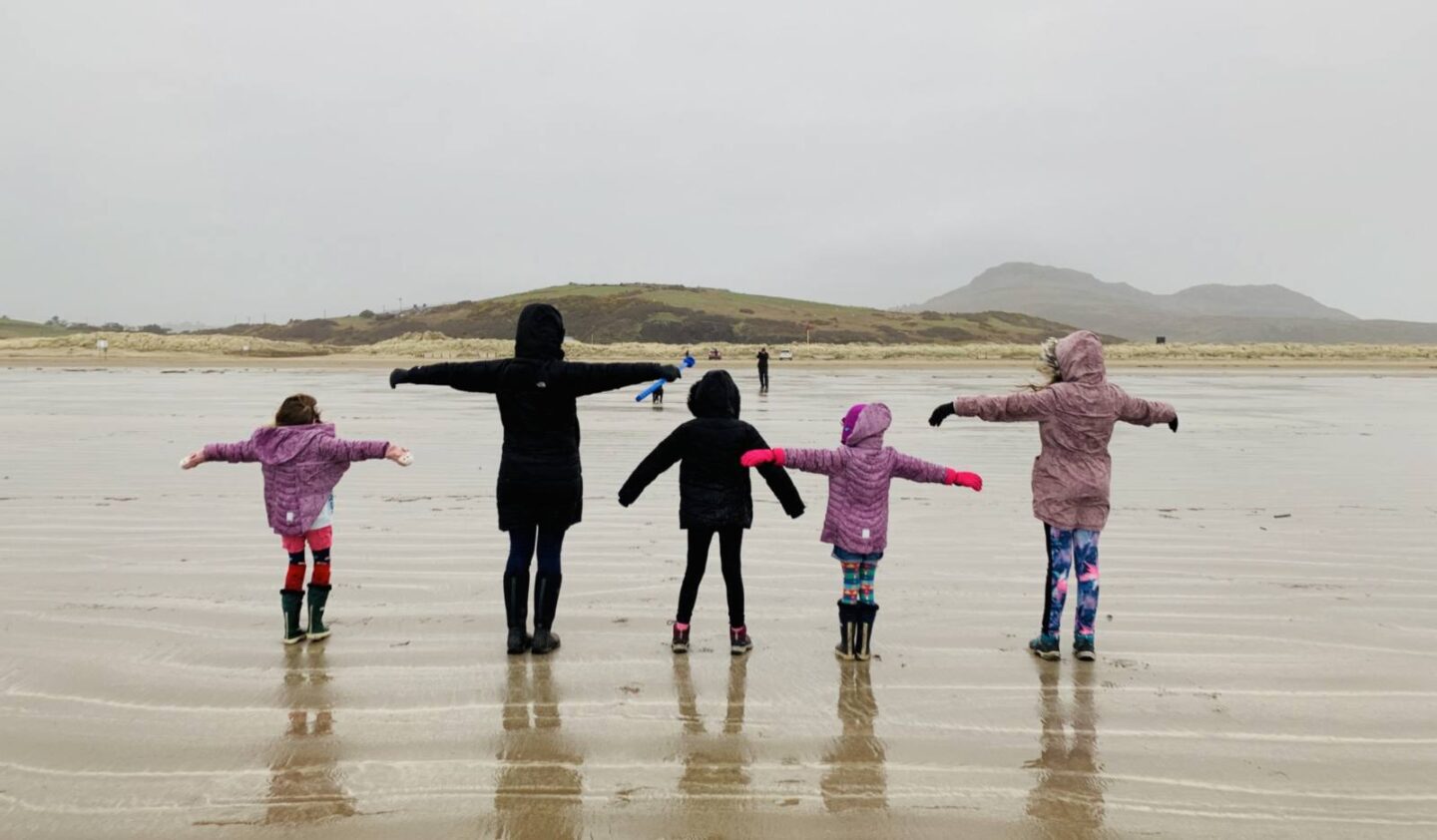 We had yet another epic game of hide and seek in the huge house which was great as being able to hide on 3 floors and in numerous en suite bathrooms really was good fun. Another marathon card game before feeding the kids spaghetti bolognaise and throwing them into bed.  We did have plans for a few more games and lots of wine, but I think the fresh air had worn us out and the sofa with some funny Tv was in order.

Sunday brought with it more clear skies and we returned early doors to Criccieth beach. We hadn’t taken any beach games with us so we took advantage of the rocks on the beach and played boules and had rock building competitions, followed by a huge game of Cat & Mouse.

After a final lunch at Cambrian House and a quicky tidy round (their housekeeper does all the bins and the cleaning so no need to worry about all that) we decided on a trip to Bounce Below  which is only 30 minutes away.

Cambrian House this Large Holiday Cottage in Criccieth which Sleeps 12 really is the most fantastic location for a weekend by the beach, even for a weekend in the rain. We are British after all!

Cambrian House is available for the following rates: 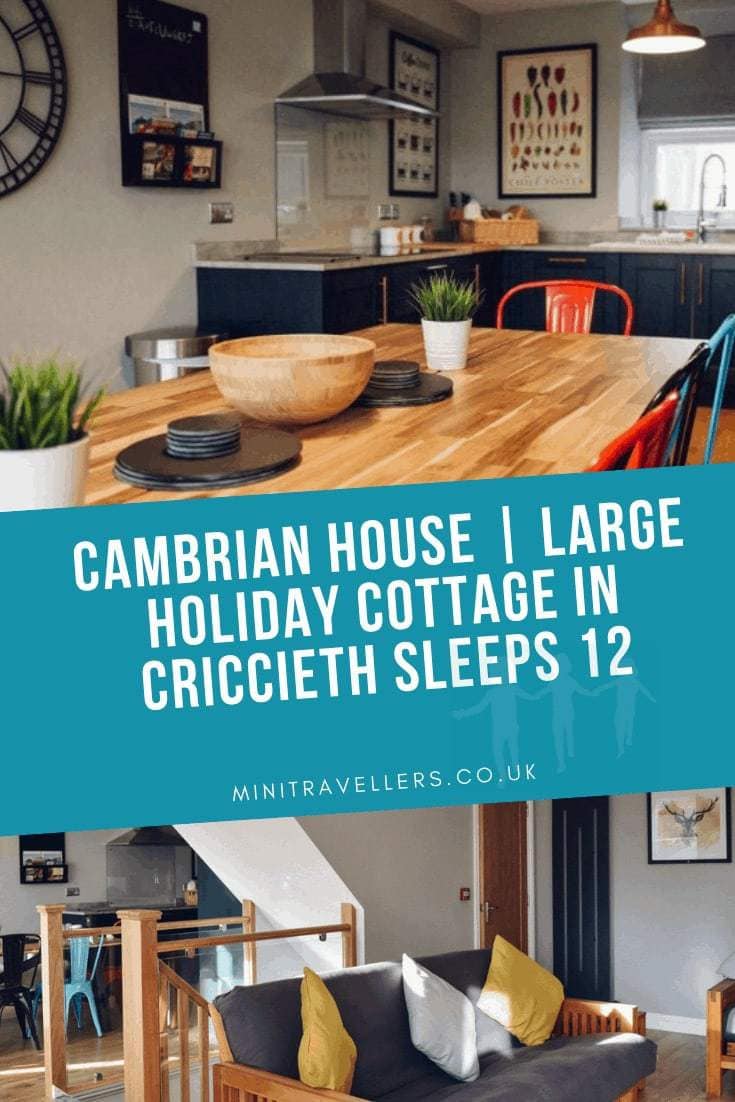 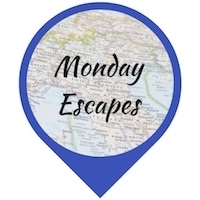 This place looks fab and perfect for a couple of families. The local area sounds nice too. Jemma #MondayEscapes

Wow what a stunning cottage I love how it has plenty of room to bring friends, its also great that there are so many places to visit close by. I think if you find a gem like this the weather really does not matter x

This sounds like an exceptional location, with a castle view and the beach being so close. It's not easy to find nice accommodation for goups this size, so I'm bookmarking this for later!

This place sounds amazing!! Nothing better that getting a group of mates together at a cottage for a weekend. I LOVE the look of the kitchen!

It looks fab Karen - I'm especially drawn to the large table and the pool table too. My kids are always thankful when we stay somewhere that allows them access to Netflix too.