Belle-Île is 9 miles (15km) off the coast of the Gulf of Morbihan in France and is Brittany’s largest island.

Belle-Île means quite literally a “Beautiful Isle at Sea”

When the island naming committee met around the campfire a few centuries ago I suspect it was a very brief discussion.  “We live on a beautiful island and it’s in the sea . . . . . . .  I know let’s just call it that!”.  I have to say it does not disappoint!

Belle-Île itself has had a turbulent history including occupation by the British, but the ‘beautiful isle’ is now a magnet for tourists and its 60 gorgeous beaches, of which we only managed to see around 10, are simply stunning.

After visiting Josselin (you can read about our 24 hours here) and Vannes (which you can read here) on our tour around Brittany in France, Belle-Île was our third stop for two nights.

Belle Ile is just off the south coast of Brittany in France not too far from Vannes and Auray.  We caught the ferry from Quiberon on a bright sunny morning with a heat wave forecast for the next 3 days.  We parked our car in one of the large park and ride car parks on the edge of Quiberon.  We did not book parking in advance but understand in the peak months it’s advisable to do so.  There are frequent free busses that deliver you straight to the ferry terminal from most of the car parks (Ferry Booking info: http://www.compagnie-oceane.fr/reservation/?rub_code=53).

After about 45 minutes of Uno and Battleships on the boat we arrived in the very picturesque town of Le Palais with its historic fort overlooking the harbour.   There are plenty of restaurants and shops as well as a nearby beach.  Combined with a visit to the fort many people just stay for the day. 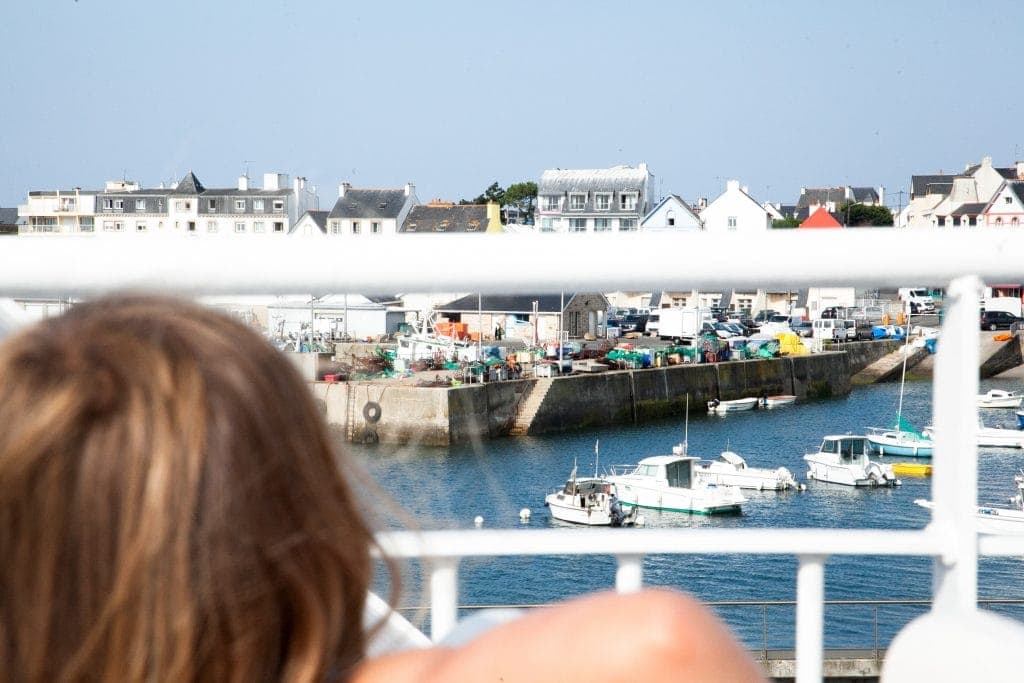 Rather than take our own car onto the island we had the use of an electric car for the three days we were there and took full advantage of it, exploring what is quite simply a “beautiful island at sea”.    You can take your own car but space is very limited and as far as I could see getting on and off the ferry required a reasonable amount of courage and advanced level parking skills!  We picked the car up from Locatourisle Voitures at the end of the ferry ramp and headed to drop the bags at the hotel then off to explore. 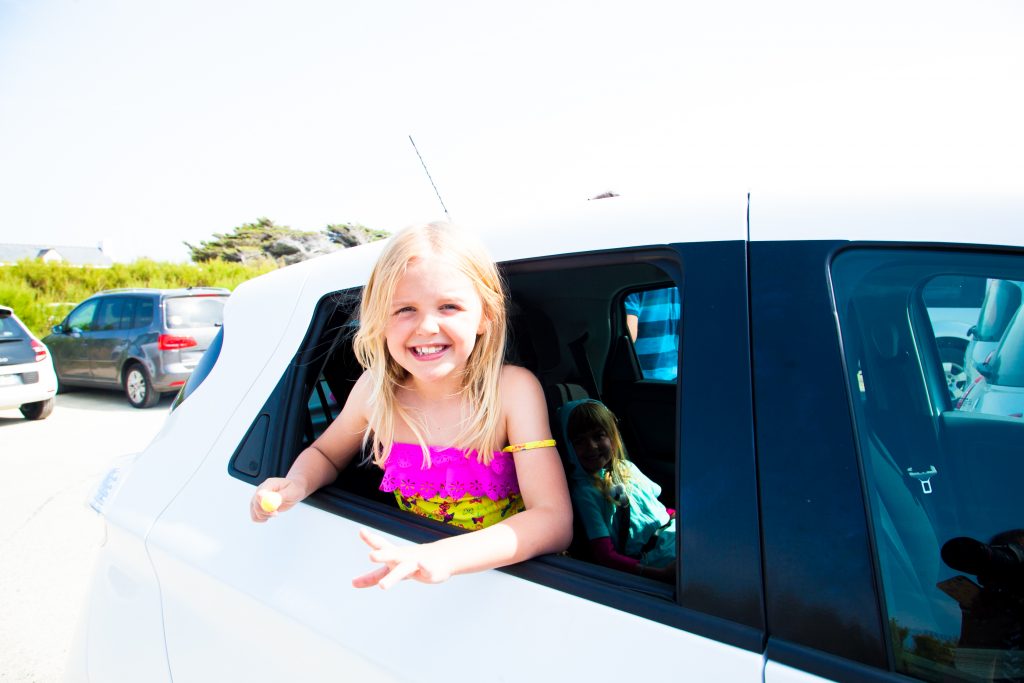 We stayed at the Cardinal Hotel at the western end of the island just outside the small port of Sauzon.  The hotel has great views across the cliffs out to sea and is one of the few on the island with a swimming pool.  Perfect for our three-little fish.  We had a family room with a balcony which had a double and three singles beds in an adjoining room which was ideal for us.  We dropped the bags, packed the beach bag and headed out via the boulangerie in Sauzon to buy some picnic stuff for the beach.  They sell frozen bottles of water to keep the food and you cool as well. 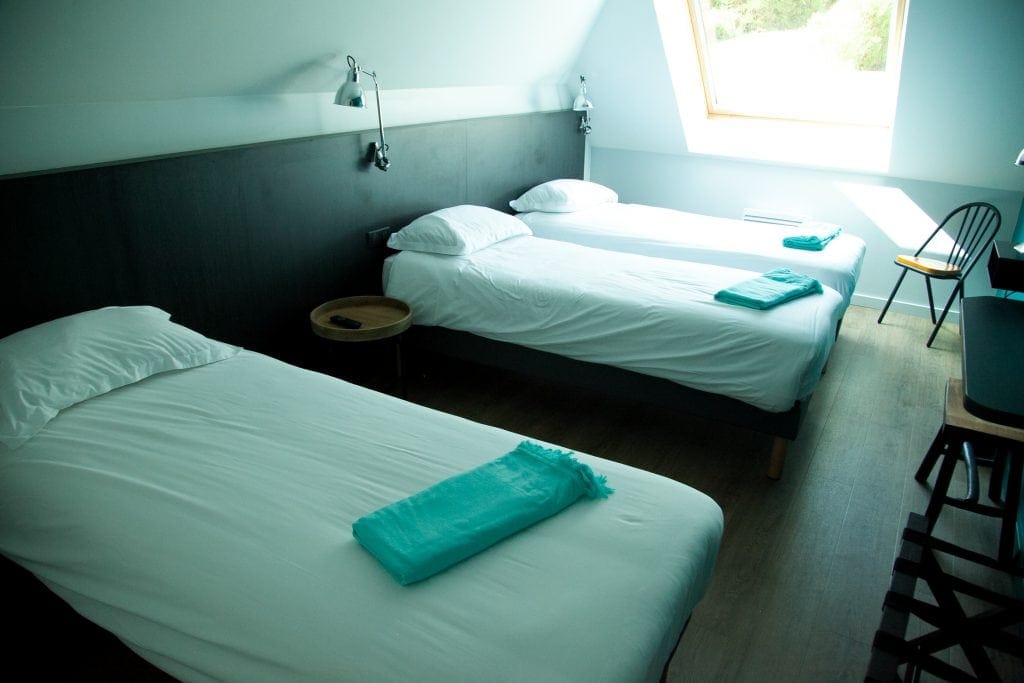 Secluded beaches and sheltered coves are around every corner on Belle Ile.  There are reputed to be over 60 beaches on this 11 mile long jewel in the ocean.    If you drive down the road that runs the length of the island and take a random left or right turn you will more often than not find a stunning cliff lined golden sandy beach with crystal clear turquoise waters.

If the naming committee were to meet again today and took the same literal approach as they did originally the island could be renamed “Instagram Heaven”!  Spot the blogger spouse!

When you get a map of an island it can take a little time to get used to the scale.  Well in Belle Ile nothing is very far away!  Within 5 minutes we found Plage de Ster-Vras just past the village of Bortifauen.

Following a little track down to the beach we were rewarded with . . . . . . you guessed it.  “A stunning cliff lined beach with crystal clear turquoise sea”.  Although the beach was a bit stoney (being incredibly picky there) we spent the whole afternoon on the beach as well as exploring the paths along the cliffs. 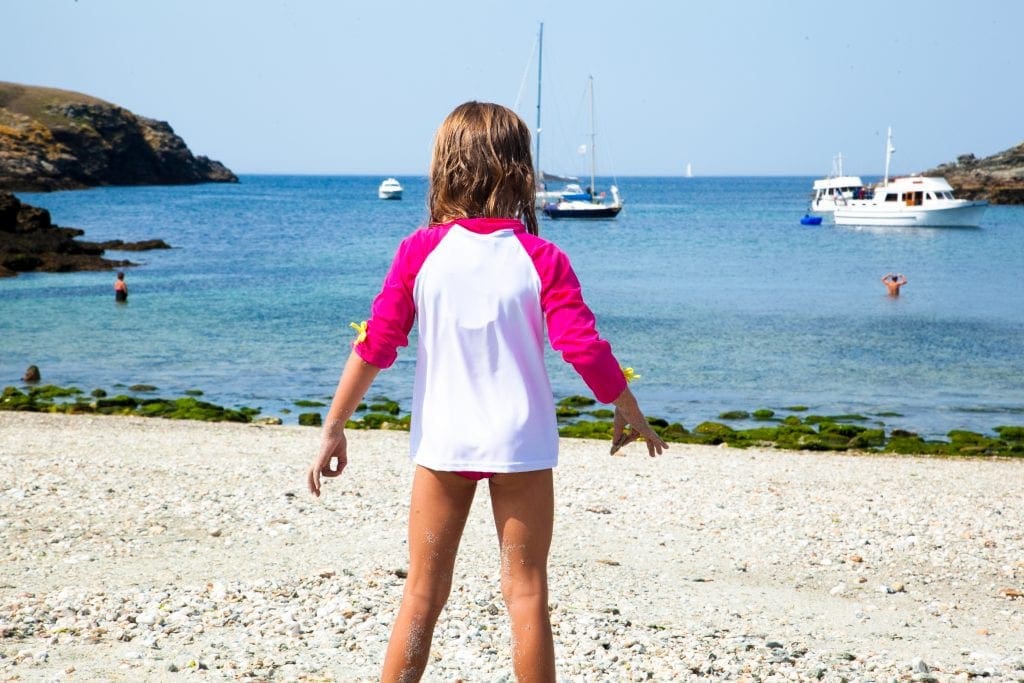 Later that afternoon we headed back to the pool at the hotel for some pool time and dinner.  The hotel restaurant is famous for its “Fuits de Mer” buffet complete with all you can eat Oysters and lobster claws.  This was lovely for us but the kids struggled a little with the snails!   They didn’t get much value for the 15 euros for the kids buffet but I made sure (like everyone else it would seem) I got my value in oysters!  After dinner we took a 5 minute walk along the cliffs and were presented with this perfect view: 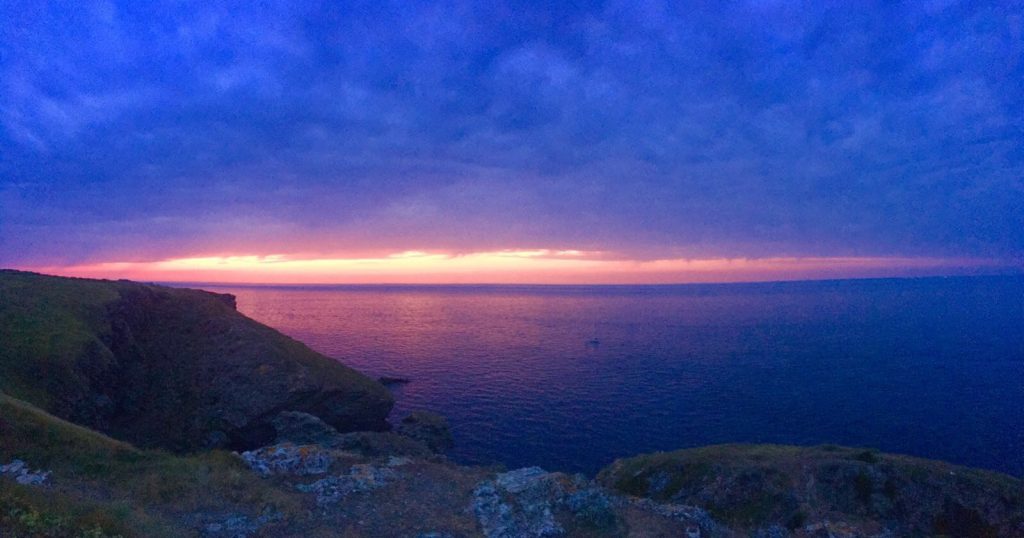 I think the hardest part of the day was deciding which beach to go!  We went for Plage de Port Donnant on the west coast near the islands air strip on the second day.  This has to be one of the best beaches we have ever been to.  Simply perfect.  Golden sand, shallow beach where you could walk out at least 100 m with the water no more than chest height.  The beach also produces perfect waves to learn to surf.  Surf boards and wet suits can all be hired from a couple of operators in the car park who also provide lessons for all ages. 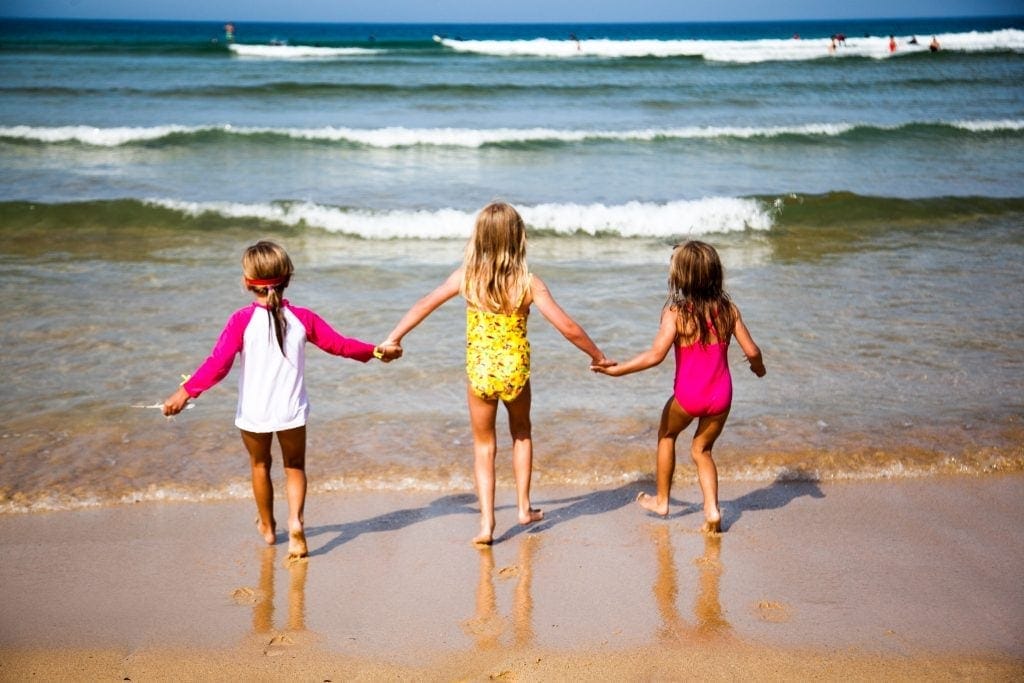 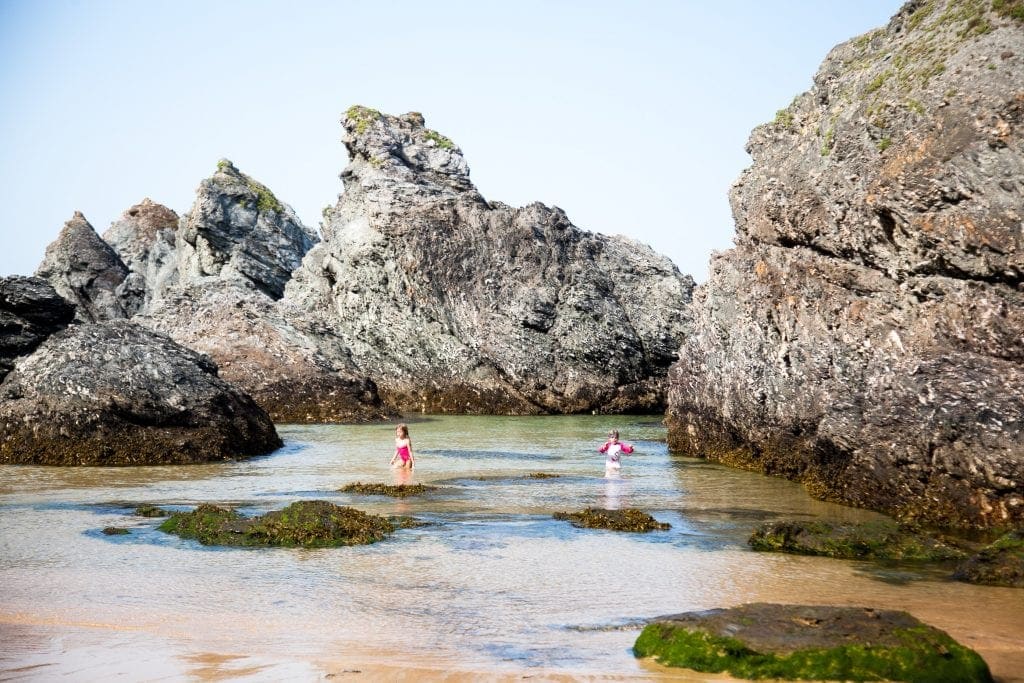 We had a fantastic morning playing in the sea and practicing our body surfing.  It’s the Atlantic so the first dip takes a bit of courage but after that we spent hours in the sea and exploring a large cove to the south.

After that we thought we may as well try another beach.  With the picnic in the car being kept cool buy a couple of frozen bottles of water we set off for Bangor.  Yep Bangor.  Brittany has a rich Celtic history and connections to Wales and Cornwall go back centuries.

We spent the whole afternoon at the equally fabulous Herlin beach.  Two of the best beaches we have ever been to on the same day!  The car park was a 5 minute walk from the beach but easy going.  As you arrive you are met by an idyllic cove with a huge beach of golden sand.  Again, the slope of the beach was so gentle you could walk out for miles.  The cliff top views are spectacular and the girls played for hours in the rock pools in perfect safety.  Just a brilliant day. 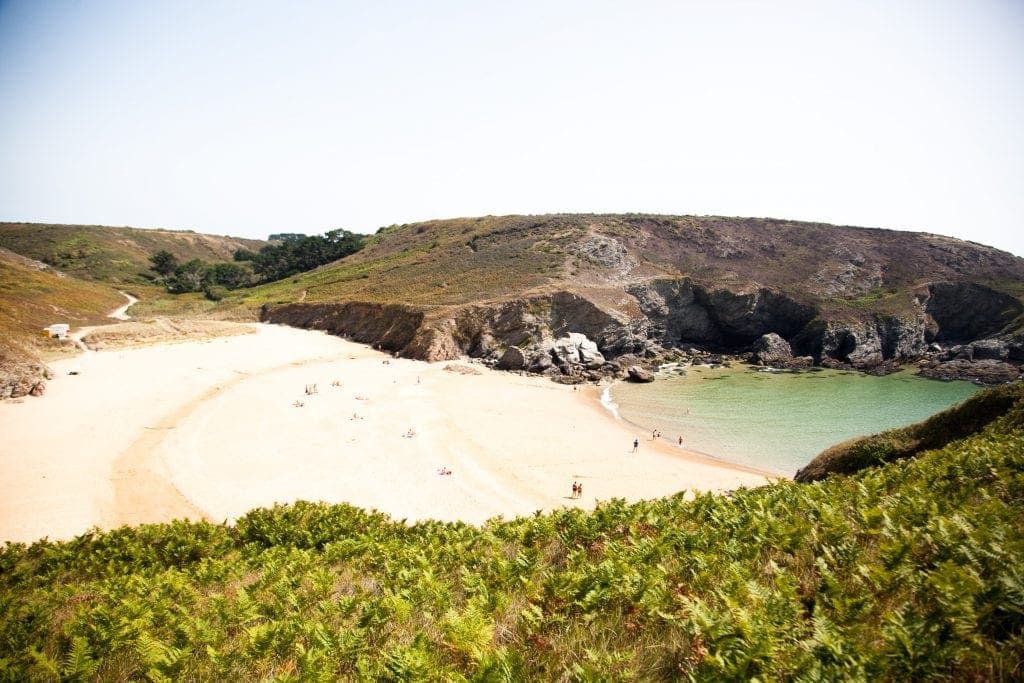 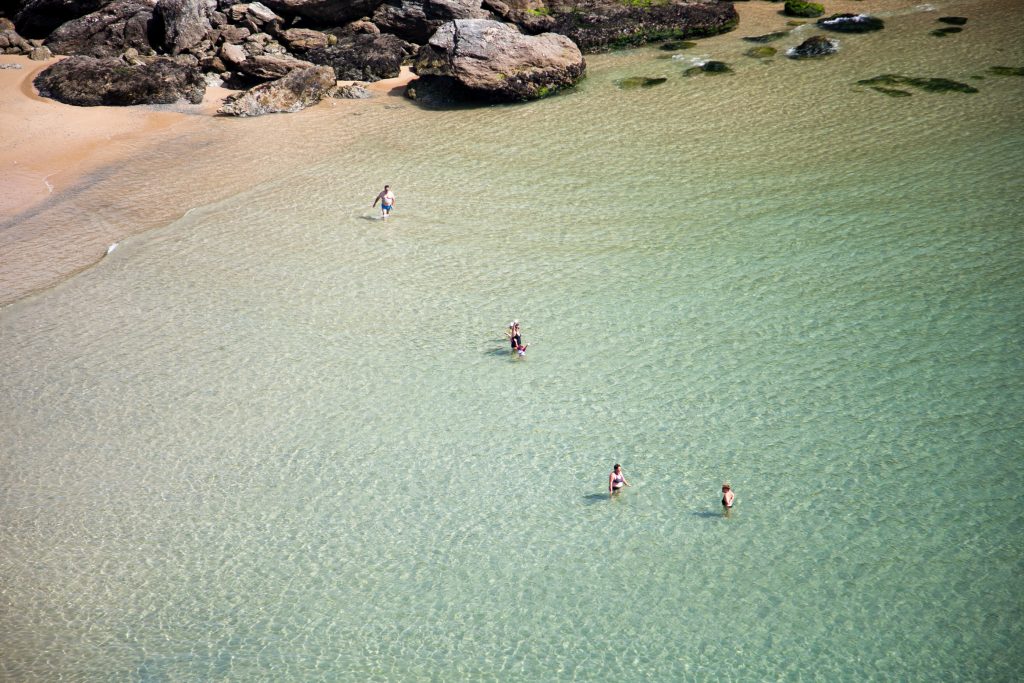 That night we ate at Crêperie Glacier des Embruns which over looked the harbour.  You need to book in advance for most of the restaurants in Sauzon.  The setting is almost perfect and the crepes were wolfed down by the girls.  As your in Brittany you have to try the calvados crepe, although it appears that the crepe is a bit of an afterthought! 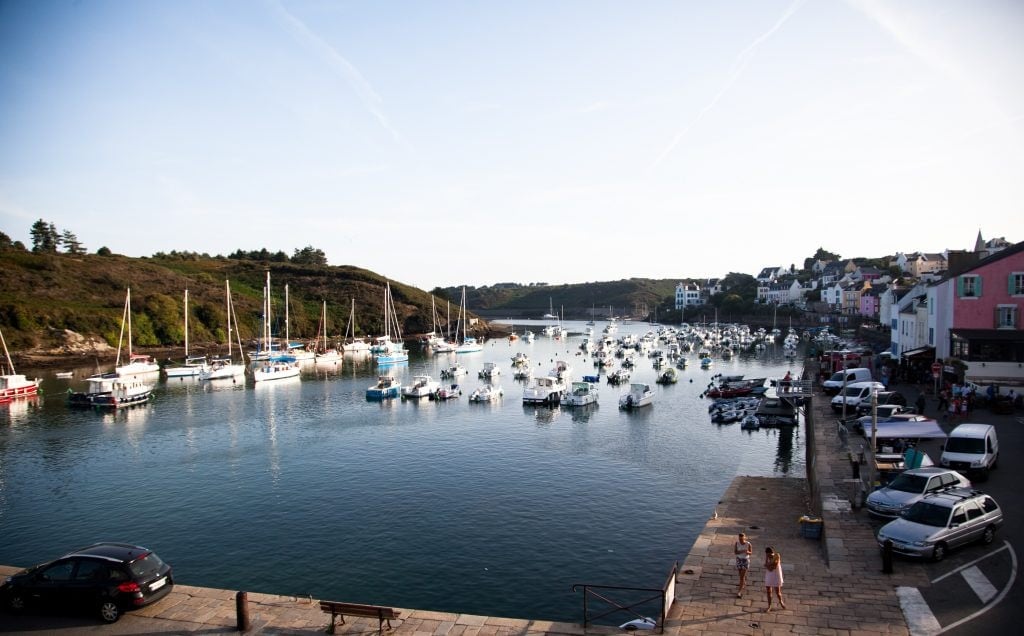 We could have been on Belle Ile for a week quite easily.  The beaches lying superb and the island is great for cycling (Although most on road) and cliff top walks.  I have to say we were very lucky with the weather and had temperatures in the high 20’s every day which of course helped.

Belle Ile en Mer is quite simply a beautiful island at sea. Many thanks to Visit Brittany for our Trip.

Calvados crepes! All you can eat oysters! That by itself would be enough to empt me, but the place is so beautiful, I NEED to go. Thanks for telling us about it x

We'd love to holiday here so thanks for the insight #MondayEscapes

You have just convinced me that we need to return to Brittany this summer Karen! We loved our time in the south of Brittany in August and got as far up the coast as Bénodet to visit the Glenan Islands. I now want to return to explore more of the region. Belle Ile en Mer looks incredible, what a place to spend a week!

Travelling With Our Kids

Wow! Simple stunning. Going to have to add this to our list now! #MondayEscapes

Oh my, that naming committee has a tough job!! The girls room at Cardinal Hotel is fab and the beaches are incredible. What a fab trip!