On a sunny Saturday afternoon in the summer holidays, we packed a picnic and our camping chairs and headed to Fletcher Moss park in Didsbury, Manchester, to watch a live performance of E Nesbit’s classic story, The Railway Children by Heartbreak Productions.

The brilliant cast of just five perform on a cleverly designed traverse stage, meaning that the audience can sit on either side of it and still have brilliant views of all the action, while the characters continually move around the stage.  We loved how the play was set up to begin.  The stage starts as a railway platform and the five cast members are in character as railway staff, trying to entertain frustrated commuters (the audience) after their train is severely delayed.  One of them offers to tell a story, while the railway staff agree to act out the various parts in that story.  The workers then cast off their high-vis vests, transforming into the Waterbury family. The stage is deftly and ingeniously converted throughout the show from station platform to steam engine footplate to front parlour. Ashleigh Aston narrates and performs as the oldest Waterbury child Roberta – or Bobby – who, along with her mother and siblings Phyllis and Peter, have been forced to relocate from an affluent life in London to relative poverty in Yorkshire after their father is imprisoned on trumped-up charges of treason. The fifth cast member – a wonderfully versatile Shaun Miller – plays all the other characters to brilliant and often hilarious effect. From the broad Scots stationmaster Perks to a Russian emigre, via a grammar-school boy and a couple of hammed up female roles, Miller would have stolen the show, had the rest of the cast not been so enchanting, warm and believable as the Waterbury family.

The cast reverted to railway workers for the 20 minute interval, giving the commuter audience an update on the delayed train, and entertaining us with a fabulous ukulele concert of popular songs old and new (they’re all amazing singers too!) and encouraging the children to dance with them on the stage/railway platform.  50p bags of sherbet pips (remember them?) were on sale during the interval, adding to the nostalgia of the occasion. 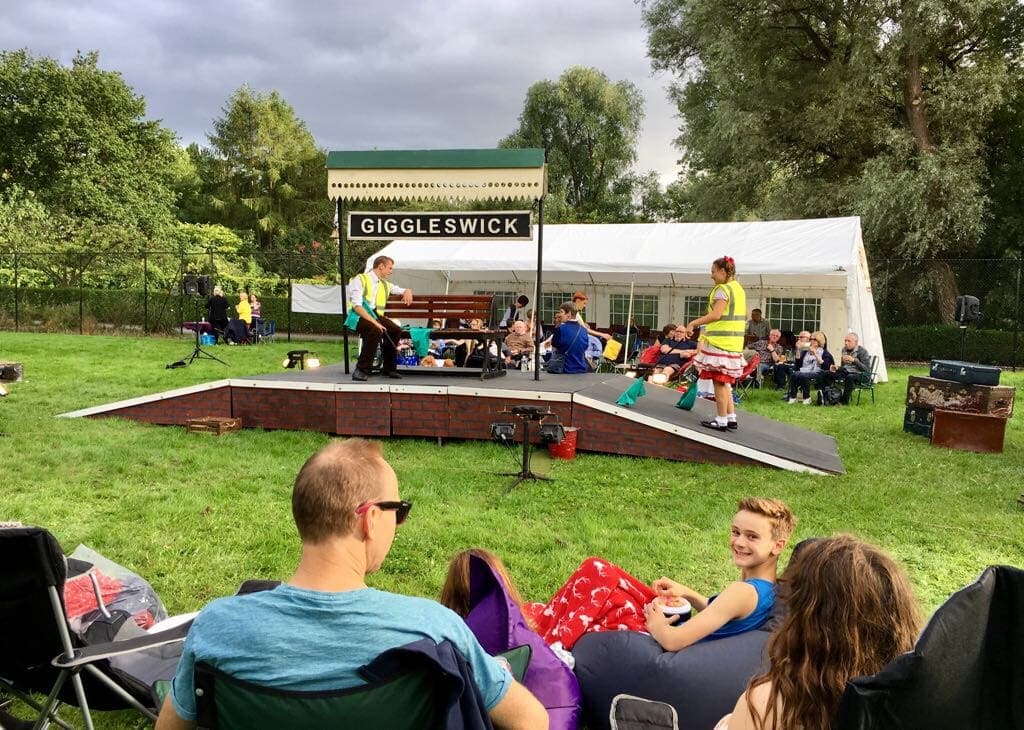 At the beginning of the performance, the audience is split up into four sections with each section being given a particular part of the noise of a stopping train to make at a signal from the cast.  This was used numerous times during the show when trains were pulling into Giggleswick station, and everyone got thoroughly into it.  A few children (including our youngest) were given flags at the start, and when the signal was given for the audience to become the train, the children had to leap up from their seats and run around the stage waving their flags while the rest of us made our train noises.

There is something really magical about watching theatre in the open-air setting of a British summertime (especially if it doesn’t rain!). Heartbreak Productions has been touring with this production since 2006 and we could certainly see why their adaptation of The Railway Children has become a firm favourite with audiences. Our 10 year old said her favourite thing about the play was how good the actors were, our 8 year old loved the flag waving participation and our 11 year old loved the ‘guy that played all the different parts’. We absolutely loved the evening, and we will definitely be looking out for more shows by this wonderful ensemble.

The Railway Children is one of four shows being toured by Heartbreak Productions this season – the others are Much Ado About Nothing, Pride and Prejudice and a new adaptation of David Walliams’ The Midnight Gang.

NB Jane and her family were given tickets to the show, but all views and opinions are her own.