This winter the Snowman has come to the Opera House Theatre in Manchester.

The much loved film has been turned into a magical stage show and last week we were lucky enough to be invited along to review it.
Armed with sweets and drinks I headed into the theatre stalls with two very excited boys, aged 4 and 7, in tow. The story is about a little boy building a snowman in his garden. At the stroke of midnight the snowman comes to life and then follows a magical, Christmassy adventure. I hadn’t really thought about what I was expecting to see but I was surprised that there was no dialogue in the show at all. In hindsight I shouldn’t have been surprised as the film doesn’t have talking characters. It wasn’t until 30 minutes into the performance though that my eldest son noticed the fact there was no talking as he had been totally engrossed in watching the action. 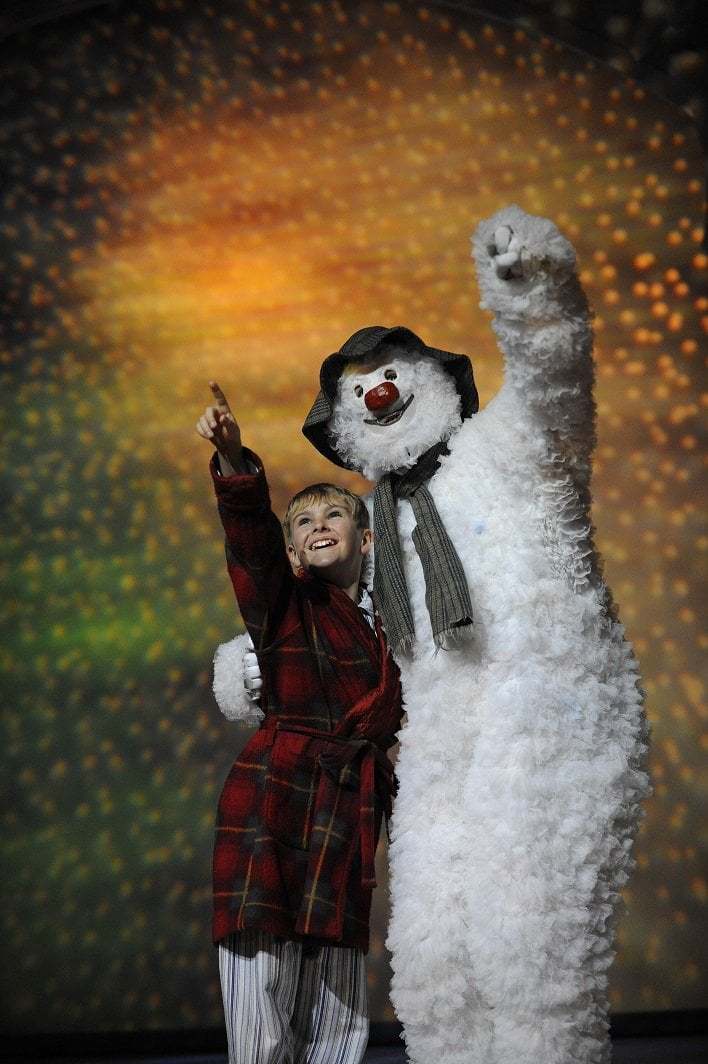 The opening scenes are set in the family’s home and there were plenty of laughs at the characters humorous actions as the snowman explored the house. The boys laughed out loud and were amazed as he drove a motorbike and sidecar around the stage. As the show progressed the question that came into mind was how would they ‘fly?’ When the moment came we weren’t let down. The snowman and the boy flew gracefully across the stage with the Aled Jones classic playing, and it suddenly felt like Christmas had begun!
After the 20 minute interval we settled in for the second half which I was pleased was only 30 minutes long. Once the characters landed from their flight the show took a twist from the book with the introduction of Jack Frost into the part where we see dancing snow people from different corners of the globe. It was good fun with light hearted humour and catchy music.
The total running time, including the interval, was 1 hour 45 minutes which was about the right length of time for our kids. In all honesty I didn’t think the second half of the show was as exciting as the first, but the story wound its way back to the house and it’s final sad conclusion.
The show was very different to my previous experiences of the theatre with less high jinx mischief, soft music and simple but beautiful scenery. Previous trips to see Shrek and Chitty Chitty Bang Bang have been quite action packed and even scary for the children in parts. By contrast the Snowman was calming and very easy to follow.
Overall I thought the show was true the classic film from my childhood and it doesn’t fail to invoke the festive spirit. It’s fun in parts and it was very well performed. An enjoyable family show.
NB: Ian and his family were guests of the Opera House but all views and opinions are their own.
Click here to cancel reply.