On Wednesday 3rd February I took my oldest Mini Traveller (5 years old) to the Lowry Theatre in Manchester for the Shrek The Musical.  I don’t know who was more excited about the prospect of seeing such an iconic film on the stage. Having watched the film thousands of times and knowing it word for word I was sure that we would both enjoy the show.  Due to it being such a special occasion I decided to book into the newly developed Pier Eight restaurant situated within the theatre building.

As we made our way into the restaurant we were greeted by smiling staff all wearing a set of Green Shrek Ogre ears which set the theme for a wonderful nights entertainment.  As we were led to our seats we went into a special Shrek themed room at the rear with Shrek the Third playing on a giant screen at the rear of the room.  There were balloons and other Shrek inspired items everywhere, even the sound track playing was from Shrek.  When we were seated the waiter brought Shrek pictures and crayons for my son and a pair of Shrek ears along with a program for me.  The menu for children was brilliant including Smelly Ogre Ears (Garlic Bread), The Three Little Pigs (sausage and mash) and Swamp Boulders (mini jackets, cheese and beans).  Really good touch.  The adults menu sounded delicious and I could have eaten everything but settled for Black Pudding and Crispy Egg for starters and Chicken and Sweet Potatoes for main course.  My son had the pasta dish which was served whilst I had my main course so he had plenty of time to draw and colour.  The food was delicious and after clearing the table we were given the option of dessert straight away or at the interval.   As I had one very excited young man with me I decided to take up the offer of the dessert at the interval and went out into the theatre. 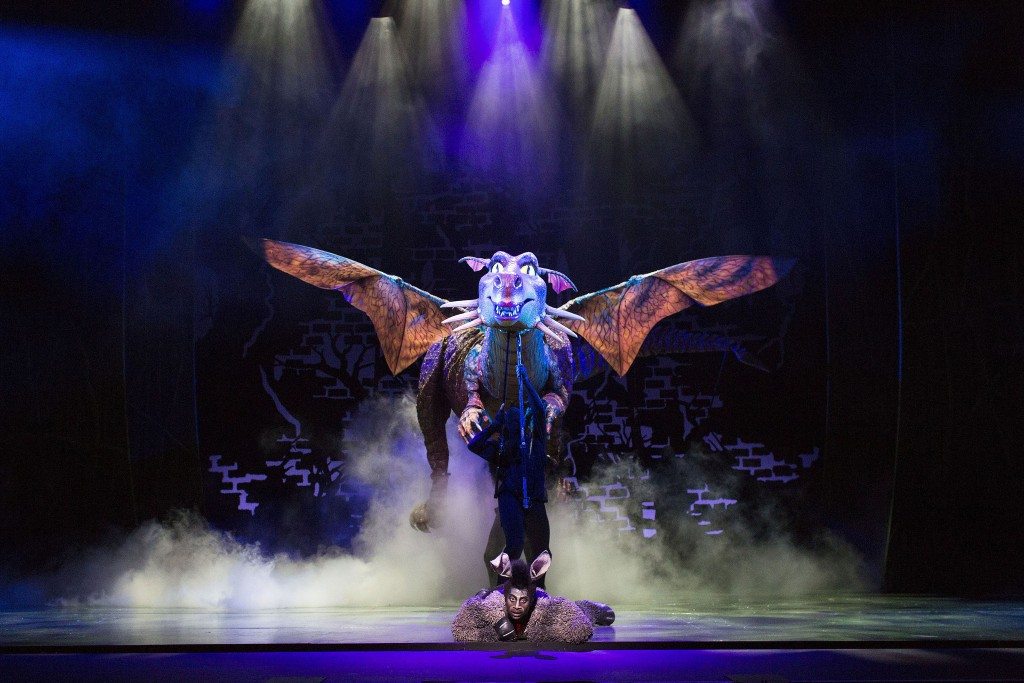 We walked around the space downstairs looking at the stalls and bought a Gingey for the little man as well as some very moorish popcorn from one of the stalls.  We were then entertained by a choir singing songs from the films to get us in the mood.  Once in the theatre we found our seats which were very close to the stage giving us a great view of the characters. 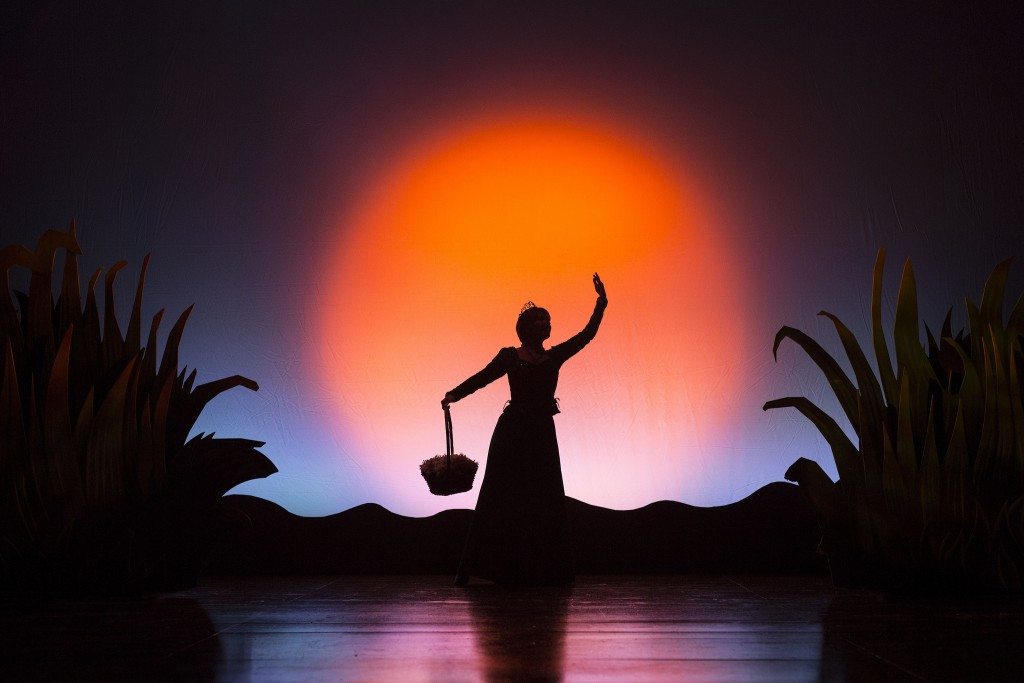 As the show started and we settled in, it quickly became apparent that whilst the stage show followed the story of the film there were a few additions not only in characters such as Peter Pan (and so I am told little red riding hood) but also with additional jokes for the adults.  One of the great things about Shrek is that it is suitable for both young and old with the humour and there were plenty of new jokes to make the adults laugh and rude jokes and scenes to make the children giggle.

After what seemed like a very quick opening half (65 minutes long) we made our way back to our table in the restaurant where our desserts were waiting at the table.   So in the 20 minute break we had plenty of time for ice cream and drinks.  I would definitely recommend this for those with younger ones as there was no queuing and it got us out of our seats.  Once the ice cream was eaten we took our seats for the second half of the show which was brilliant as the action increased and as the story played out my son became more and more excited trying to stand on his seat.

When the show finished with the whole cast singing and dancing along to the final song,  I looked around and a large portion of the crowd were also on their feet dancing.  We then made a dash for our car as on a school night we wanted to get home.  Having arrived early for our pre-show dinner we had parked on a low car park level which at the time I didn’t think too much about however it was a big help in getting away quickly and definitely something to consider if your children are younger. 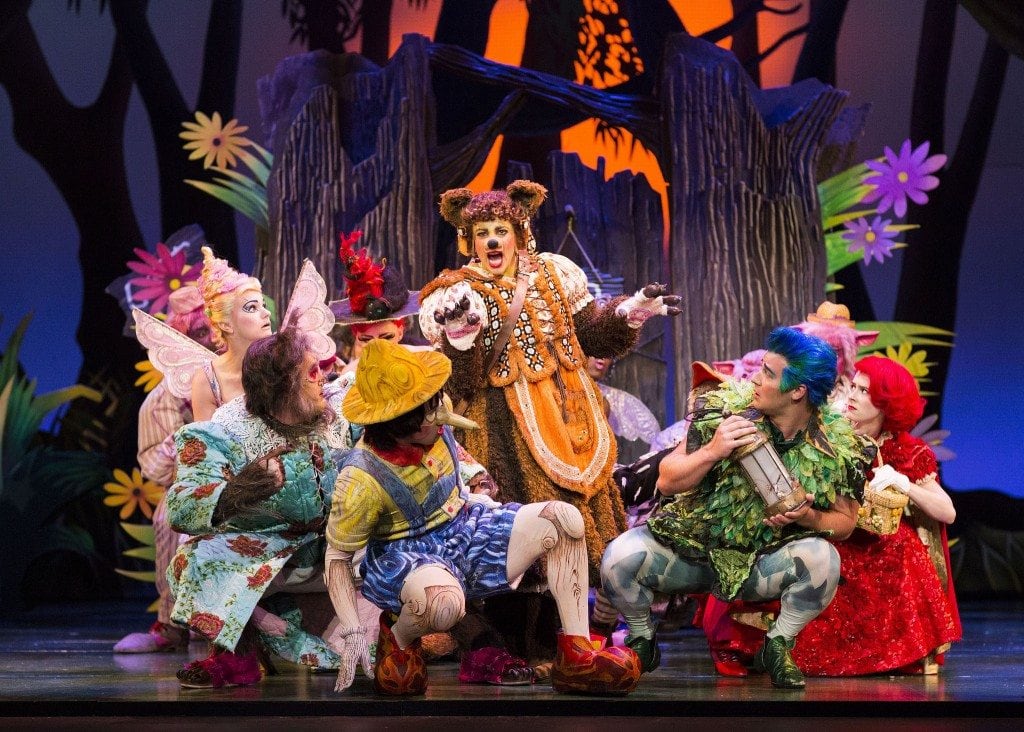 Overall the whole night was a great success from a fantastic meal, great seats in a very modern and well equipped theatre, to the smiling staff all around to guide you to where you needed to be.  So much so that my son commented on how friendly everyone was.  Even if you have watched the film numerous times there were still the added extras that will make you smile and given a chance I would definitely go and watch Shrek The Musical again.

Cracking night and well worth a visit. It’s on until Saturday 20th February 2016 and you can buy tickets here.

NB: Ian received tickets and the meal at Pier Eight in exchange for this review but all views are his own.