We hadn’t planned a holiday but as work was becoming increasingly stressful, we decided to book late, just before the end of school holidays and go. We have 2 boys aged 9 and 12. They can be boisterous. We also have an 18 month old baby girl (BG) who all our lives revolve around.

So, on looking for a cost effective last minute deal, our priorities were flights at sensible time and a pool that would be safe for BG to splash around in. By this, I meant a shallow pool or a paddling pool so that she could potter around without having to have an adult holding on to her at all times. 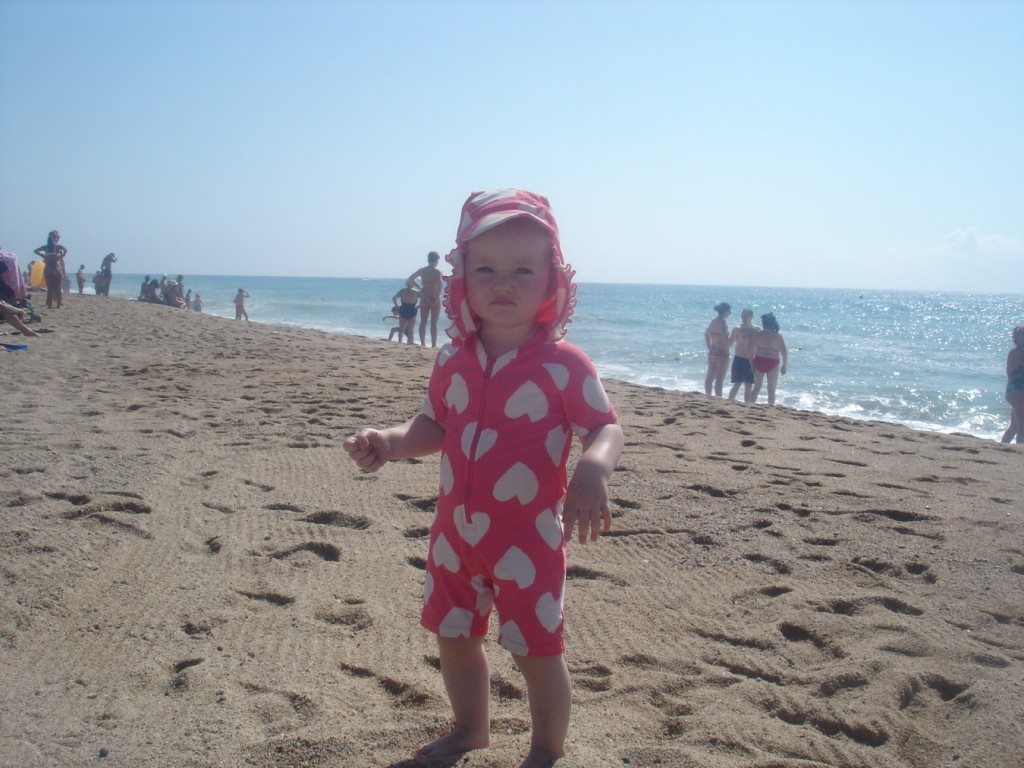 We didn’t mind where we went as long as there was sunshine, a seaside, a pool and at decent food (at least half board). As there is no knowing what BG would be prepared to eat from one day to the next, the buffet style usually offered as half board for all inclusive was preferable, in order to enable her to choose from a wide selection.

Searching for holidays when the destination is of no consequence is not easy. It doesn’t seem possible to search by “paddling pool” and “decent flight times” alone. So, I searched various locations including Turkey (might be too hot and it was not clear whether the hotels were close to other facilities), Italy (all the available hotels looked like they could possibly on the edge of a cliff – too stressful!), Portugal and eventually Spain.

The Miami Park Aparthotel in Calella (The Miami) was described as having a children’s pool on various websites and the pictures of the hotel and the food looked fabulous. The interior hotel pictures weren’t great but the reviews were good, apart from a few saying that the room were small for a family of four. We were a family of five but decided that we could manage in a small space. We would have an apartment with a twin room and a double sofa bed in the lounge and an extra cot for BG. 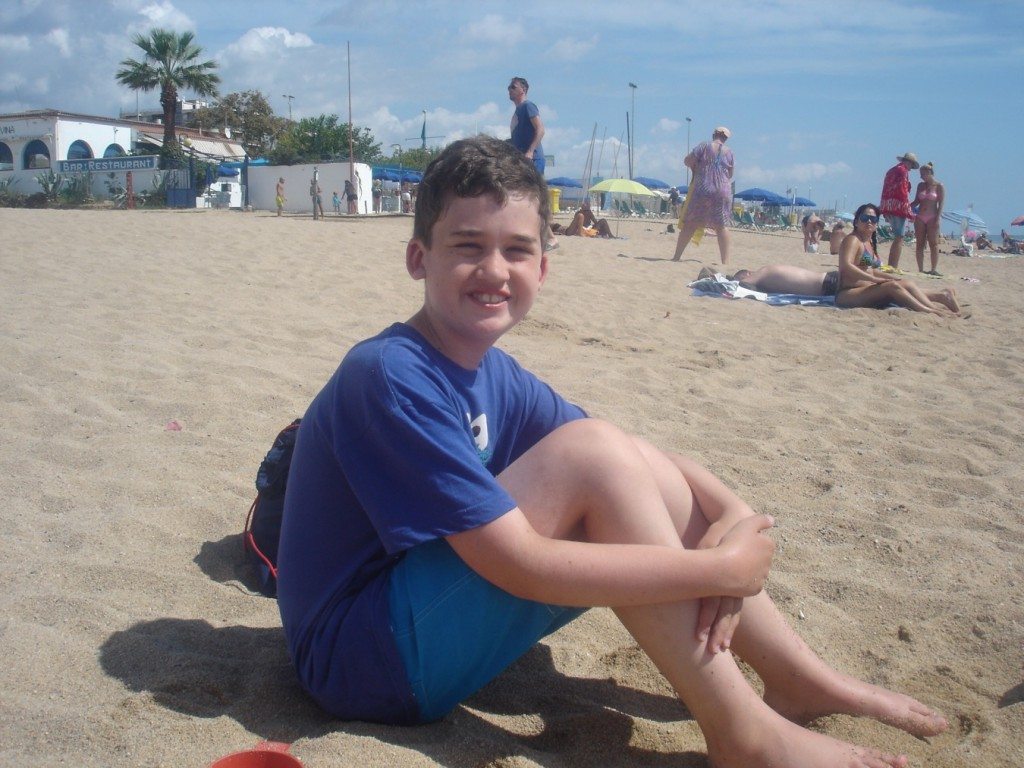 We arrived at about 3pm on the Wednesday (as the boys were due back in school the following Wednesday) after non-eventful flights. Our arrival in the resort didn’t fill us with confidence, as we were abandoned on the roadside by the transfer bus, no sign of the hotel. After unloading our bags, the bus driver jumped back into his cab and was about to drive off when I called him for directions. He laughed, made some hand gestures, said left and right a few times and drove off. Fortunately, we knew which side of the us the sea was on and, from my brief research, I knew roughly where the hotel was likely to be.

We struggled on through the back streets, with the boys complaining of having to carry their bags and, fortunately, we found the hotel after about 10 minutes walking between the grim looking buildings, we found one with balconies and after another 10 minutes of the receptionist not being able to find our booking, we were directed to room 218. I was immediately disappointed that the room overlooked the backstreets at the rear of the hotel.

The room was basic, quite tired and smelt of smoke – whether this was as a result of smoke coming in from other balconies or due to the previous occupants was difficult to know. I initially thought that the walls were decorated with woodchip but I later realised that it was, in fact, a paint effect. There was a small kitchen which contained a fridge, two cooking rings, a sink, microwave, toaster and a kettle. The sofa bed was ideal and there was an adequate travel cot set up in the bedroom. However, a major drawback for us was that the twin beds were actually a small, rock hard, lumpy double bed. I just knew that I would have difficulties persuading the boys to share a bed. On enquiring with the reception about whether there were any other rooms with twin beds, I was told that the hotel was full. Our 12 year old announced that he would be sleeping on the hard tiled floor.

We then decided to explore. Sadly, the pool was also, initially, a disappointment. The children’s pool was not as I had imagined.. The main pool was over 2 metres deep and just looking at it frightened me. Why did it need to be so deep? I wasn’t comfortable with BG going in it even in her rubber ring with her dad. As for the boys, I just had to grin and bear it – they can both swim, there probably wasn’t any real danger. There was also a small part of the pool which was shallower but it was only very small, and up to shoulder height on a toddler. Thus, not at all safe for BG to splash around in without having one of us inches away from her. 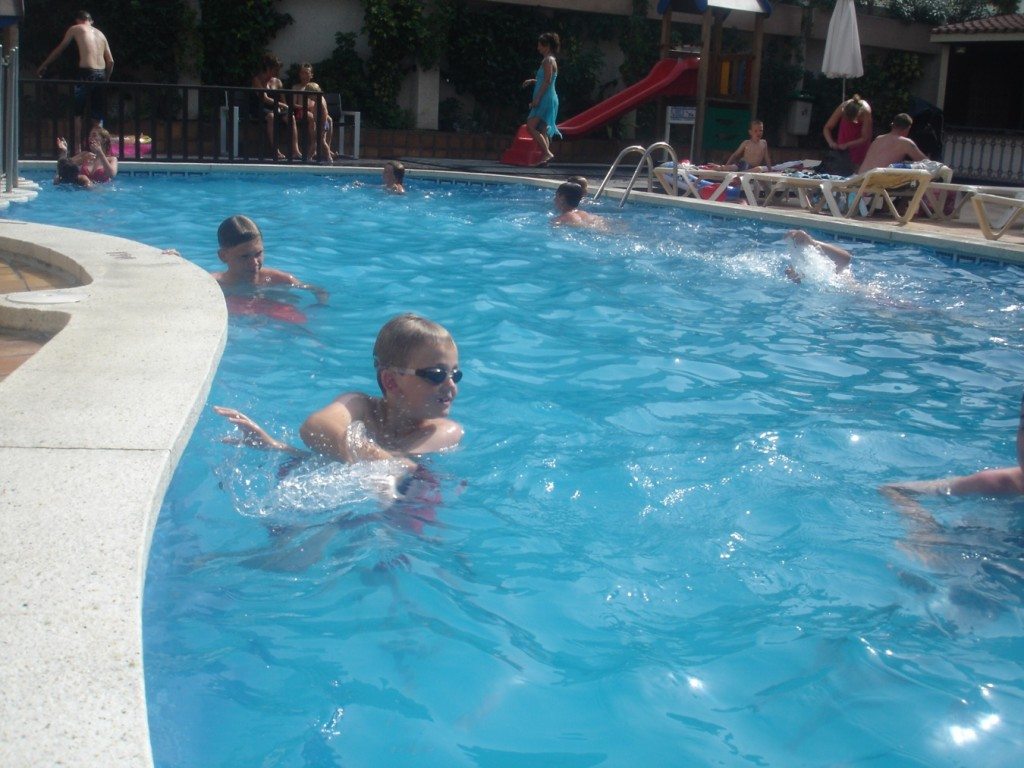 At this point, I was focusing on the fact that, elsewhere in the hotel, the air was filled with a fantastic smell of food. I was holding on to the view that provided that the food was good, we would be okay.  Dinner was served at 7.30pm, not unusually but later than usual for us. However, as we remained on British time, 6.30pm wasn’t too bad. Sadly, the food on this first night was barely edible. There were a few bits of salad, chips and what could only be described as a fish stew (with bits of unidentifiable octopus type parts in it – the bits that I would usually not have considered to be the edible bits!) and a sort of beef stew with chewy fatty meat. The boys filled up on cake covered in synthetic cream and complained!

When we returned to the room, the stench of smoke was even more noticeable and, to cap it all, in order to keep him quiet, I eventually agreed that the 12 year old could sleep on the sofa bed with his dad (which was very nice and seemed quite new), whilst I had a very bad night with the very lovely but wriggly 9 year old in a rock hard lumpy bed! I barely slept so once I had encountered the barely cooked sausages and cold baked beans for breakfast, we had all had enough.

By this point, I was regretting choosing the hotel based on the reference to the “shallow pool”. So, for the first time ever, I called the travel agent, Travel Republic (TR) to enquire about moving hotels. To be honest, as we had booked on line, I was not expecting to receive much of a service but they were absolutely excellent. I spoke to Wendy initially who put me straight through to Ben in Overseas Resorts, he took full details of all our concerns, made enquiries and called back when he said he would. He made enquiries with our hotel and with other hotels in the area. Unfortunately (or not), TR had no contracted vacancies in the resort for a family of 5 for the rest of the week but suggested that we could make private arrangement and take up our complaints with The Miami upon our return.

We then made separate enquiries and identified a hotel at the other side of the resort which had availability and decided that, so as not to disrupt the boys holiday too much or make it too stressful for them, that we would wait until the following day to move.
By this point, whilst I had been making enquiries, the boys had had an excellent time jumping into the mega deep pool, over and over and over, BG had discovered that she could walk around in the shallow pool quite happily holding on to a float (although we did have to be by her side, she loved it!). 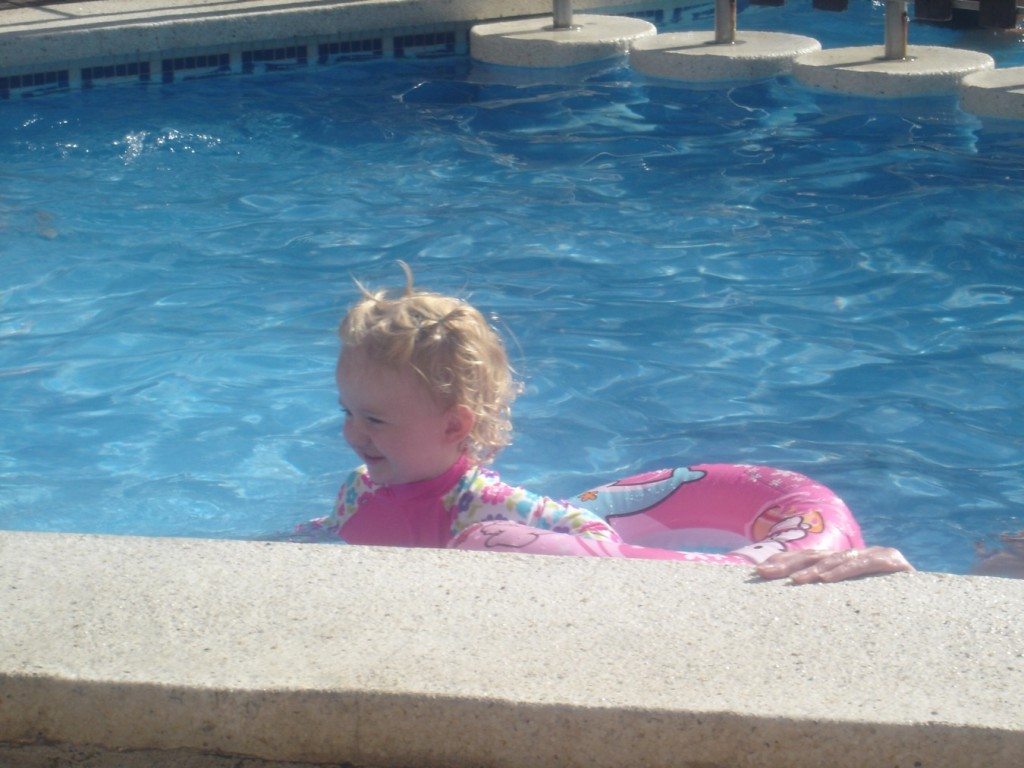 That evening, we heading for dinner to discover a much improved offering, lovely salads with a proper fish paella and roast chicken and chips. If we had arrived on the Thursday, then we would not have faulted the evening meal. The cooked breakfast remained poor and cold but we realised that we could pick and choose the edible bits and use the microwave that was conveniently located in the restaurant area and over the next 24 hours, the smoke smell seemed to recede – whether it was because it had been a residual small from the previous occupants, will remain a mystery. 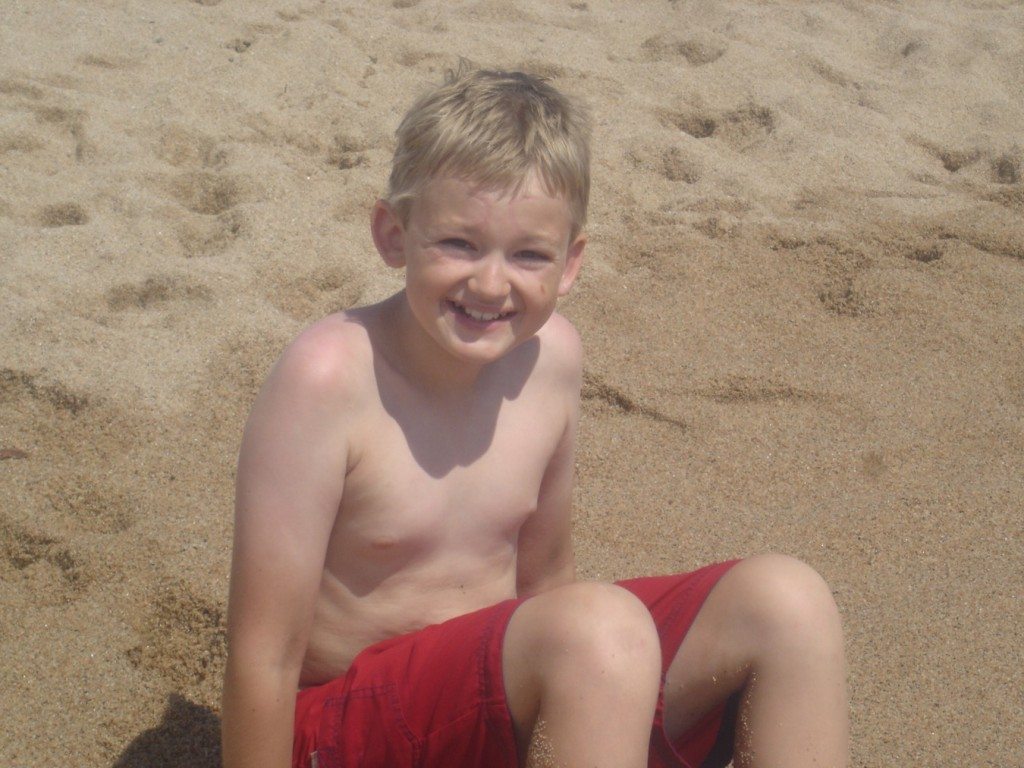 The overall result was that we decided to remain for the rest of the holiday in the Miami and, by the time we came to leave, we were quite sad to go. I asked the boys whether or not we should consider returning the following year but my 12 years olds response was:
“Just because it’s nice is not a reason to come back as most of the fun of being on holiday is exploring a new place”

So, overall, we would recommend the Miami, providing only that all older children can swim and that you do not eat in the hotel on a Wednesday (we assume that as Wednesday is not a usual changeover day, we may just have been unfortunate, unless the complaints relayed to the hotel by TR had an effect) but there is a very good restaurant kebab shop over the road from the hotel that serves excellent chicken and lamb kebab meat with chips and salad. It is also noted from the feedback on Trip Advisor that some of the rooms may have been refurbished. Therefore, it may be worth requesting one, provided that you book on time to do so. And, of course, the fact that the rooms had mini kitchens proved ideal for someone who decided she was only going to eat pasta from a packet (which we had brought with us from Aldi in the event of emergencies) for the entire week. We cooked it in the room, took it with us in a plastic pot and even ate it on the beach. 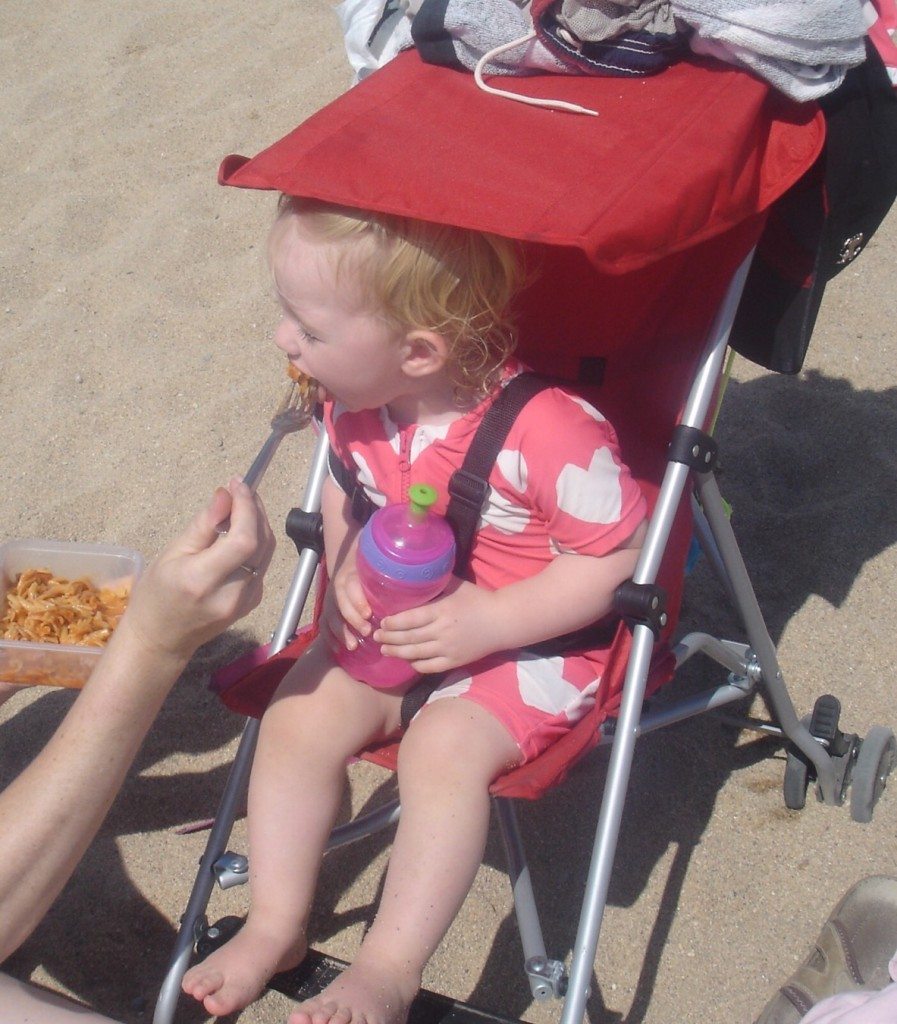 Oh and on the subject of the beach, the beach was fab but we had days went the children were not allowed in the sea due to the sea being rough and the sand was very coarse so not ideal for sand castles. 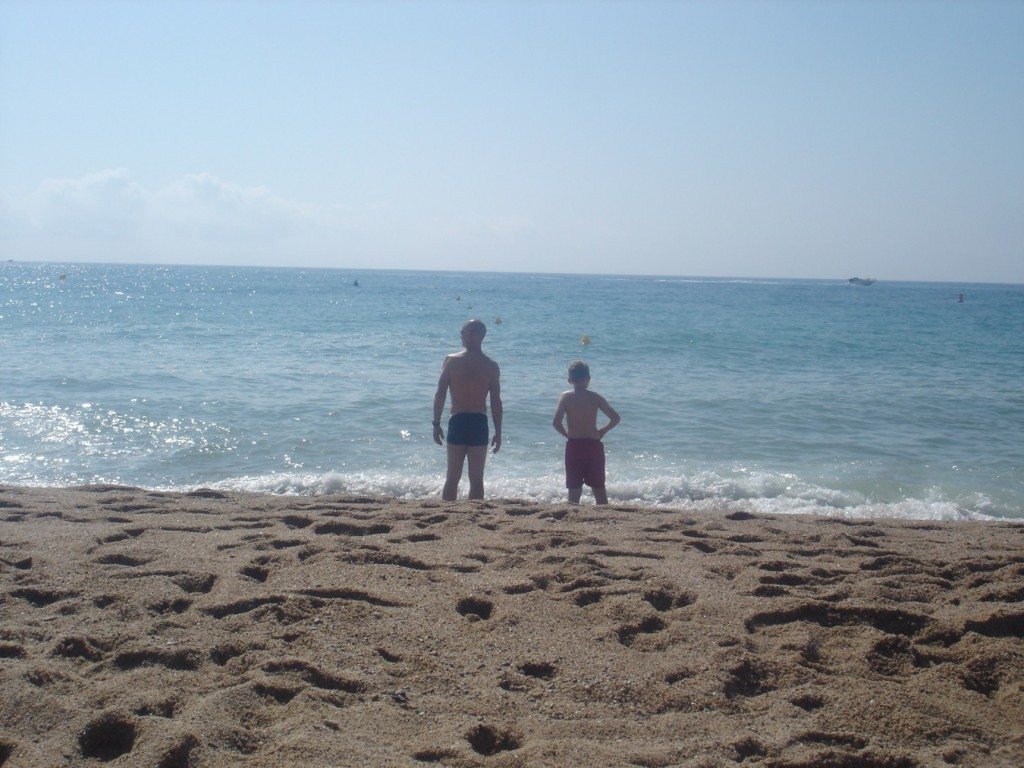