When we were asked if we fancied going to stay at Carden Park I jumped at the chance. A swanky night away just me and the hubby I thought – how wonderful! But that wasn’t the offer, the offer was to take the kids and find out how child friendly it was. A slightly different proposition but exciting nonetheless. 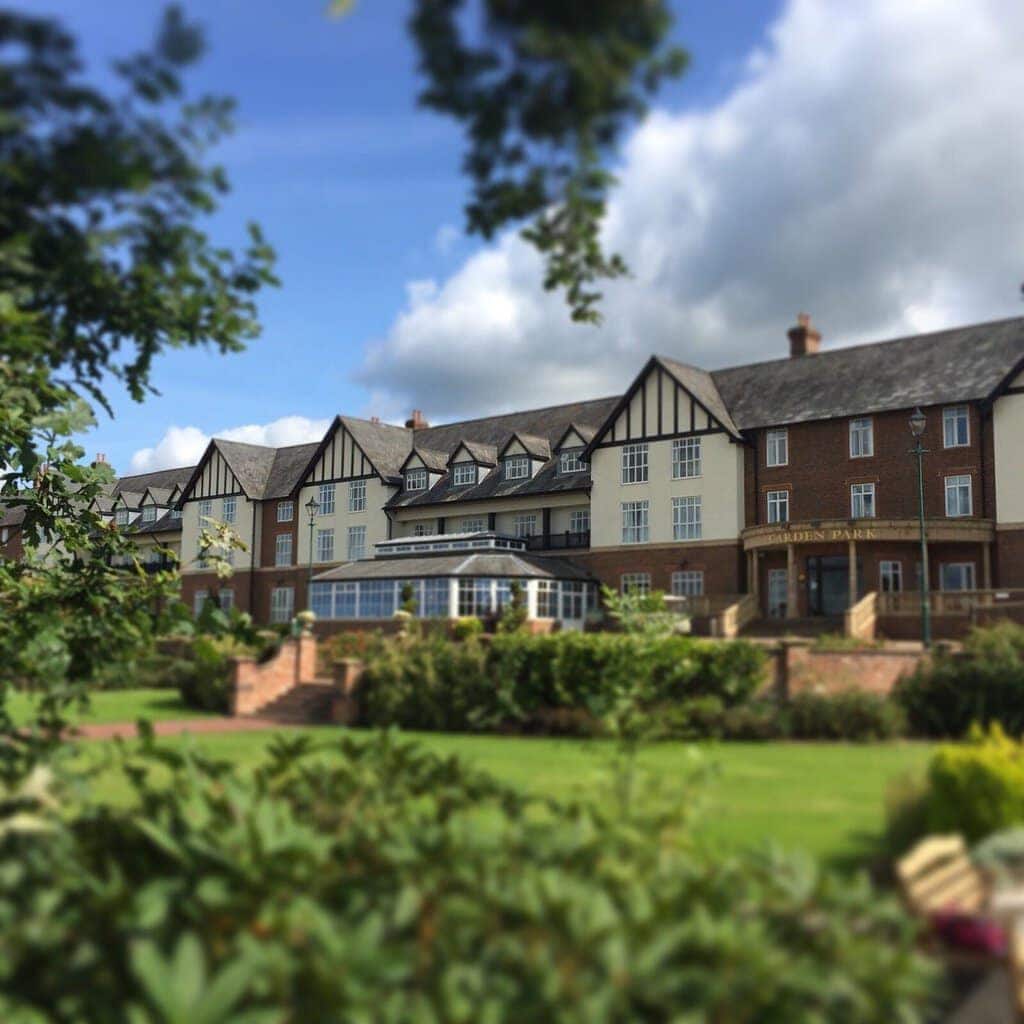 Hubby was in Telford on Friday so we agreed to meet at Carden Park at around 4ish. Our eldest was on a mini holiday with her Grandparents for the weekend in the Lake District with Park Resorts so there was just me and the twins. We packed the Ford Smax and set off for yet another adventure. We really are doing out best to put it through its paces.

As we were driving to Carden Park, I picked up a call from hubby (blue tooth hands free in this Smax!) who had arrived and was calling to say he wasn’t sure how child friendly it was going to be: it’s a bit nice he said!

However as we found out, nice hotel doesn’t have to mean it’s not child friendly. Carden Park welcomed our girls with open arms and they had a fabulous 24 hours. So what did we do?

Well we bounced on the beds! Having received a press release which started Bouncing on beds is strictly allowed at Carden Park.  We thought we would give it a try! 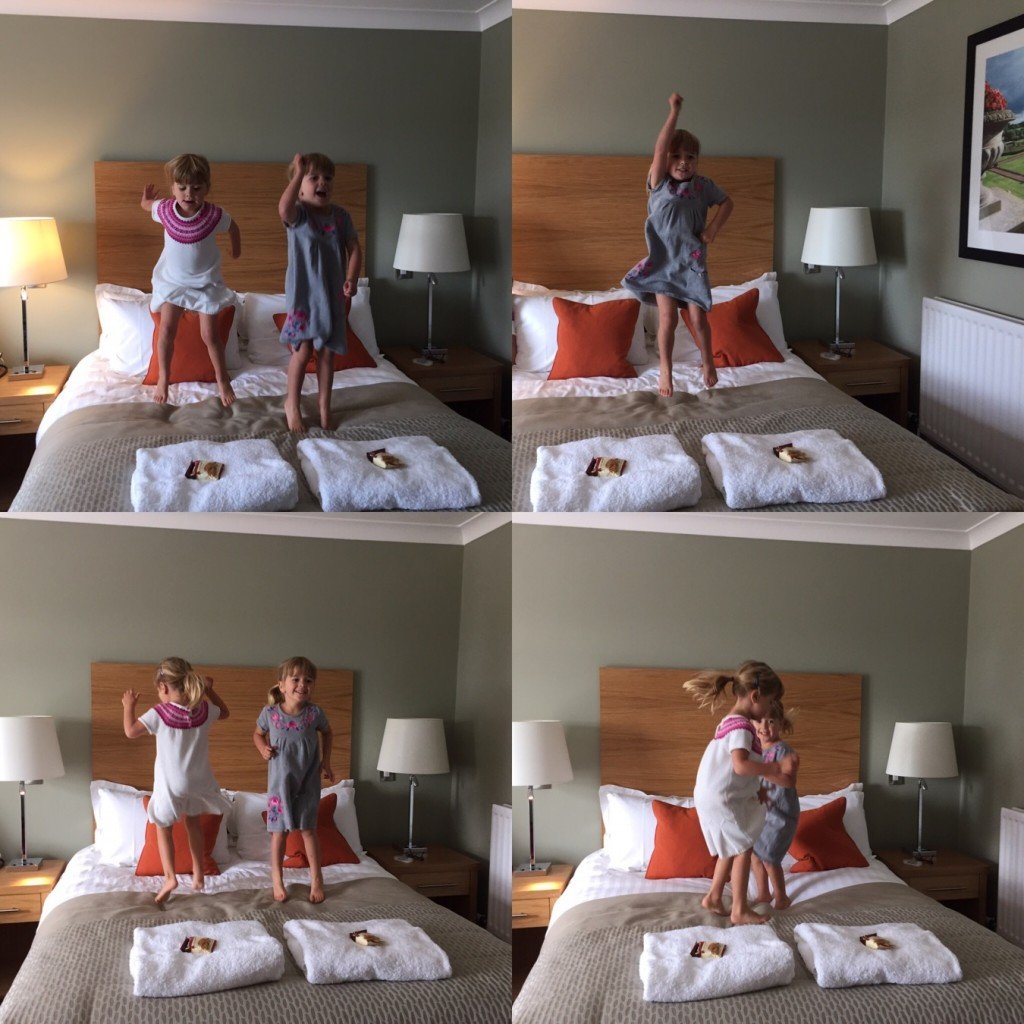 After all the bouncing, me and the girls took a wander round the estate to see what we could find. Hubby took a conference call in the room (which the rooms are very well set up for) and met up with us as we discovered the crazy golf. 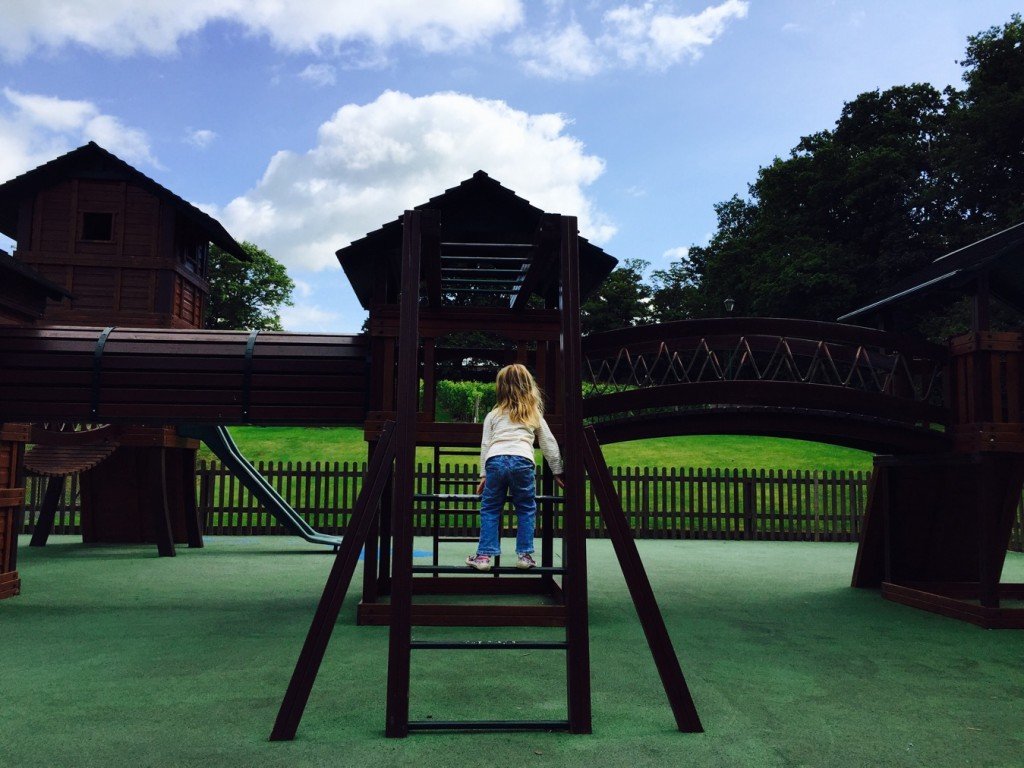 I was really surprised on our wander round to find a huge and very well maintained adventure playground. The girls loved the fact that it was empty and could happily have whiled away the rest of the afternoon just there. There was however more to see. We found the event station where you can arrange Archery, Laser Clay Shooting, Mountain Biking etc and saw the Kong aerial ropes course. We booked in our session at the driving range and the girls swung their tiny clubs round whilst watching music videos on a very large screen. So far so good!! 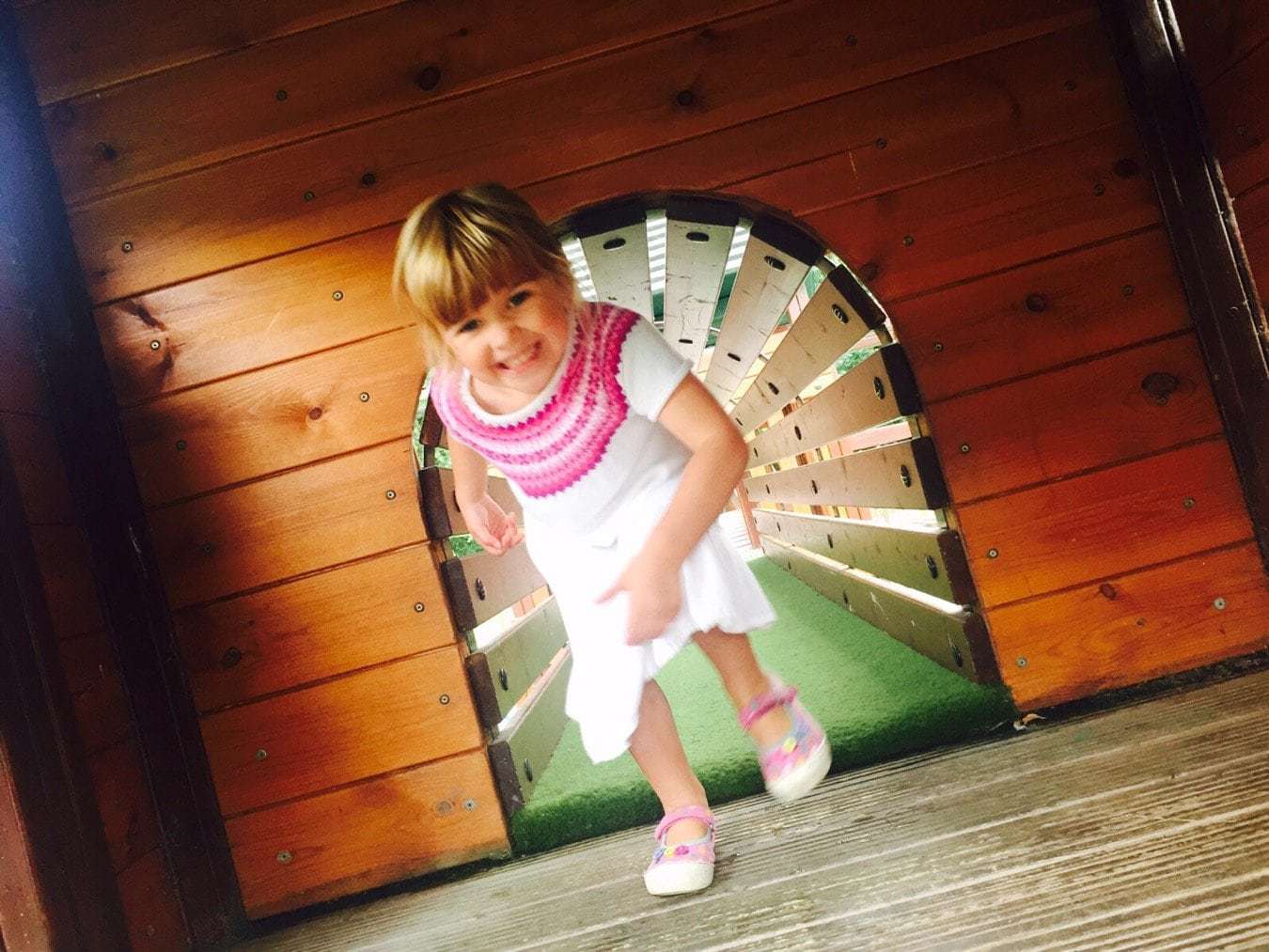 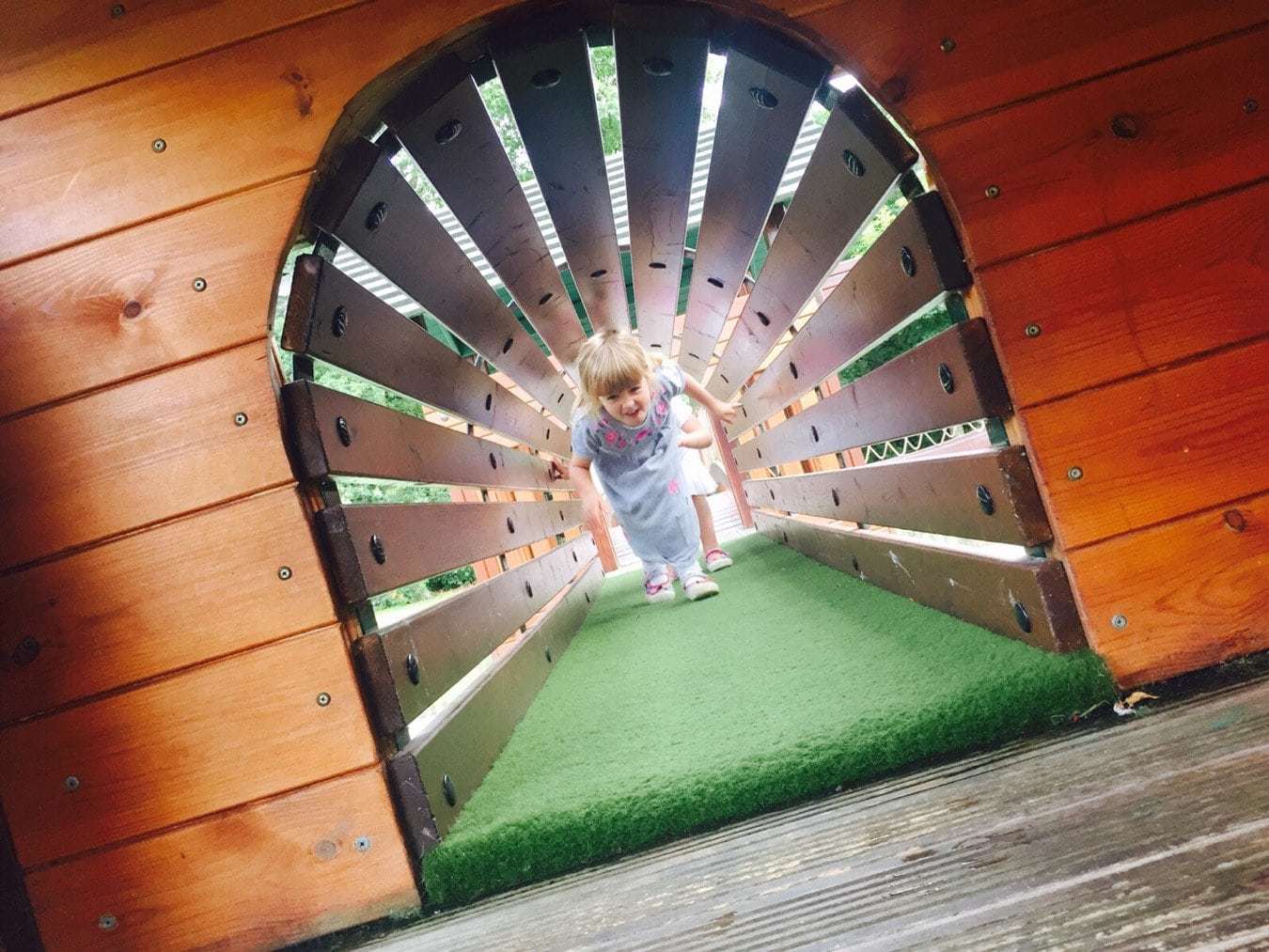 As we had dinner booked in in The Vines bistro for 5.30pm we decided not to play crazy golf that evening but the twins never let rules get in the way of fun, so they made up their own challenge which was who could run round the course the quickest! Dad encouraging and Mum wondering who was going to trip and fall first! 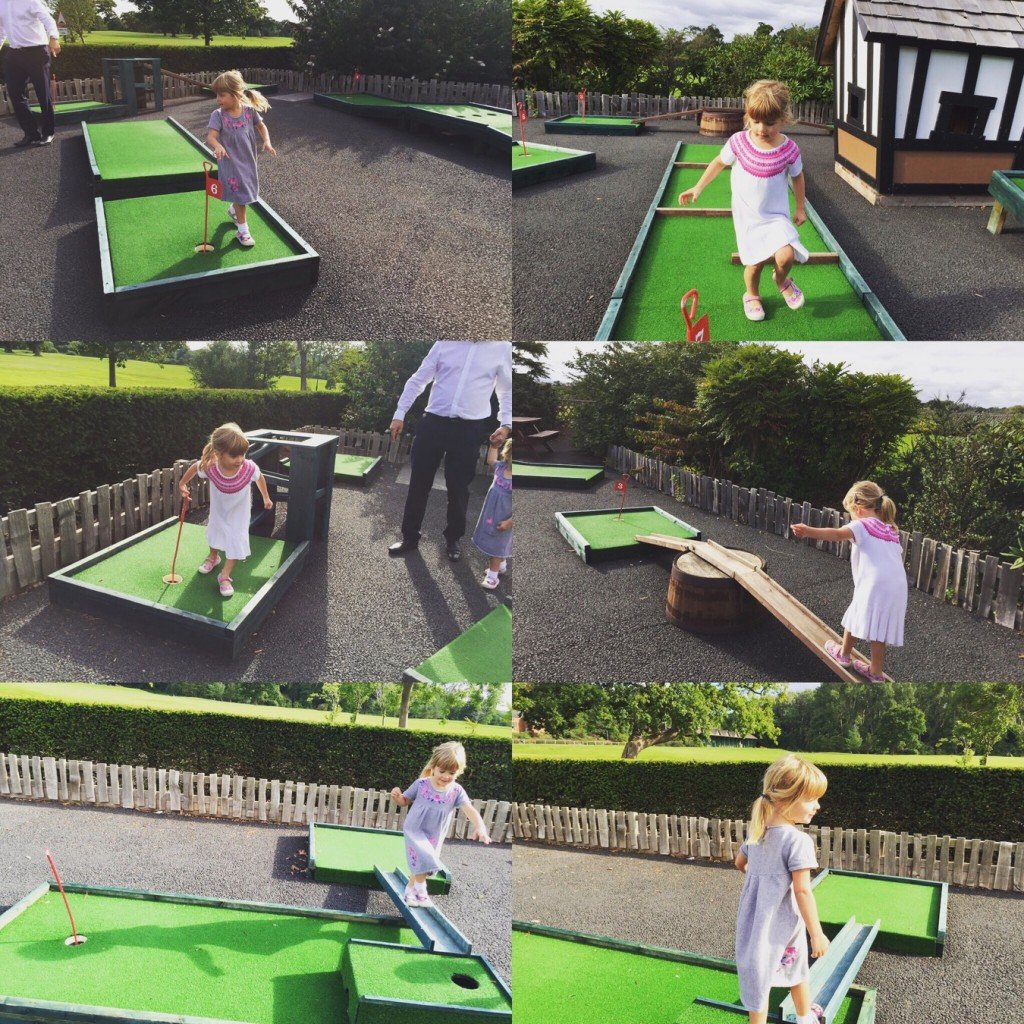 Dinner at The Vines was superb. The staff were all very kind to the girls and the activity pack for them to play with whilst waiting for their meals was one of the best I have ever seen. Granted the cost of the kids menu was slightly higher than in a Harvester or Pizza Express but not much more. The portion sizes for the main course were also huge and the girls could easily have shared (in fact all three of them could have). 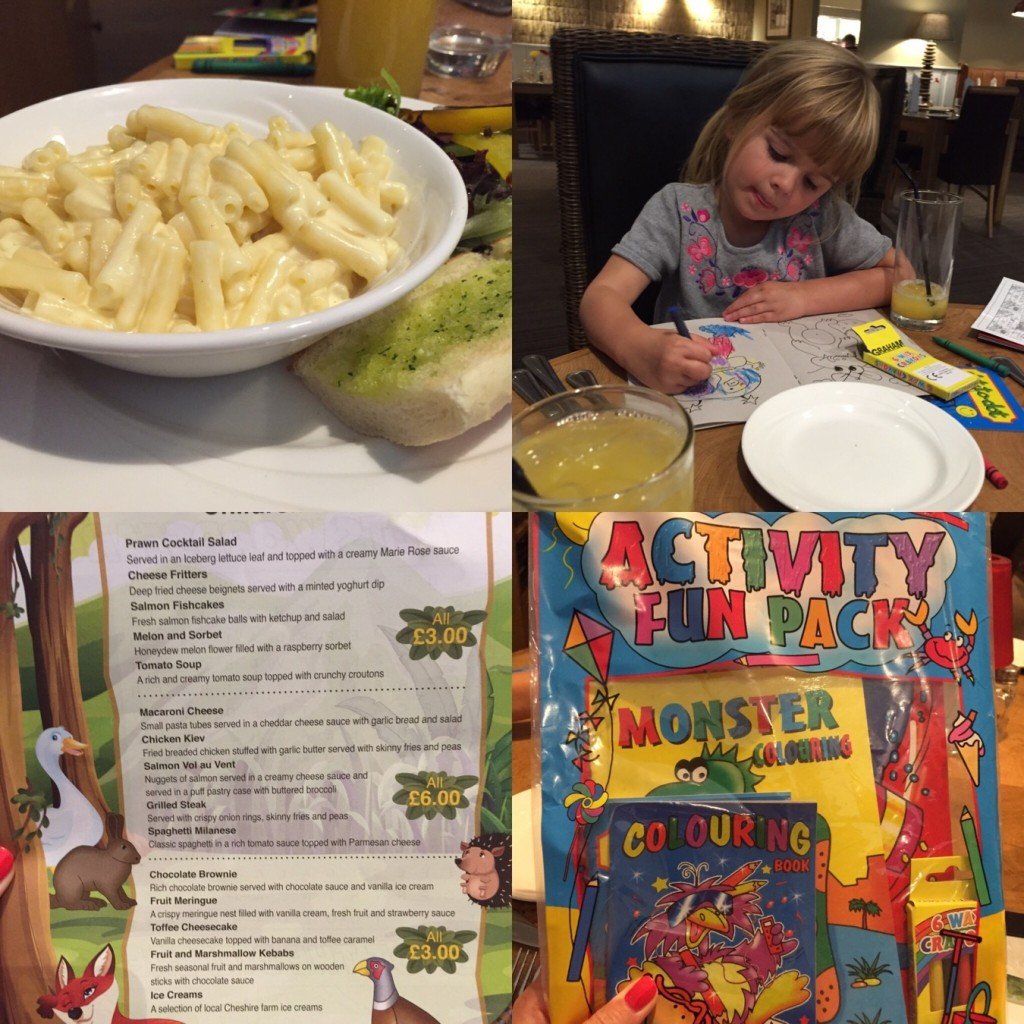 They chose to try the salmon fishcakes and the cheese fritters for starter and both opted for Mac and cheese with garlic bread. There was going to be chocolate brownie and ice cream for pudding but they were too full and too tired after all the earlier fun.

The bistro menu we had to choose from was very fairly priced. Much less expensive than I would have expected from a bistro within a luxury hotel. My chicken liver parfait with brioche was very good as was hubby’s ham hock terrine. We washed this down with a glass of Carden Old Gold sparkling wine which is produced using grapes from Carden Park’s onsite vineyard. This was really good and I really do wish I had bought a bottle to bring home with us. The lamb and burger that followed were delicious. My burger was possibly slightly bigger than I expected…. 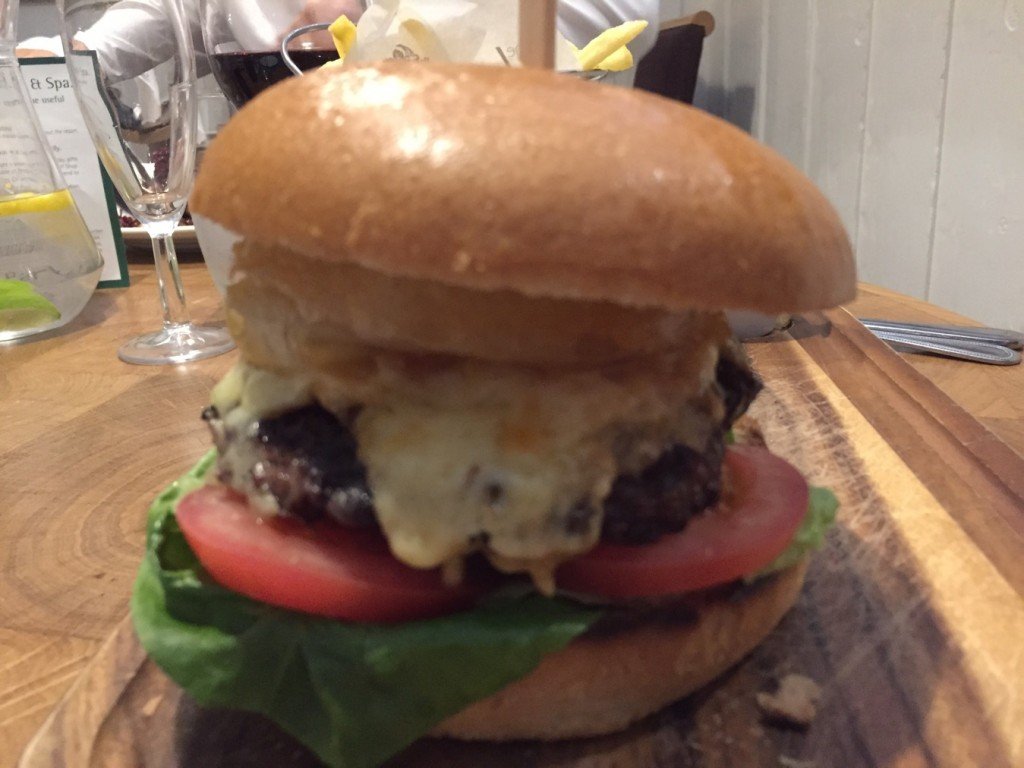 But I managed to make quite a dent in it as it was so good! The wine list was again fairly priced and whilst I imagine the wines may have been slightly pricier in Redmond’s restaurant which boasts a AA Rosette; our Malbec at £24 was really very nice.

We all went back to the room at 7 with the idea of watching a film before getting the girls to sleep and reading/watching iPads ourselves. The girls were shattered though and just wanted to sleep so we turned the light off to help them get to sleep and promptly fell asleep ourselves! Whilst the Malbec clearly helped we obviously needed the ten hours sleep we all got!

I expected the girls to wake up early as we were all sleeping in together but it was actually 7.30 by the time they woke up, and then movement only really started because Isobel needed to find the activity pack from The Vines which she had slept with under her pillow! 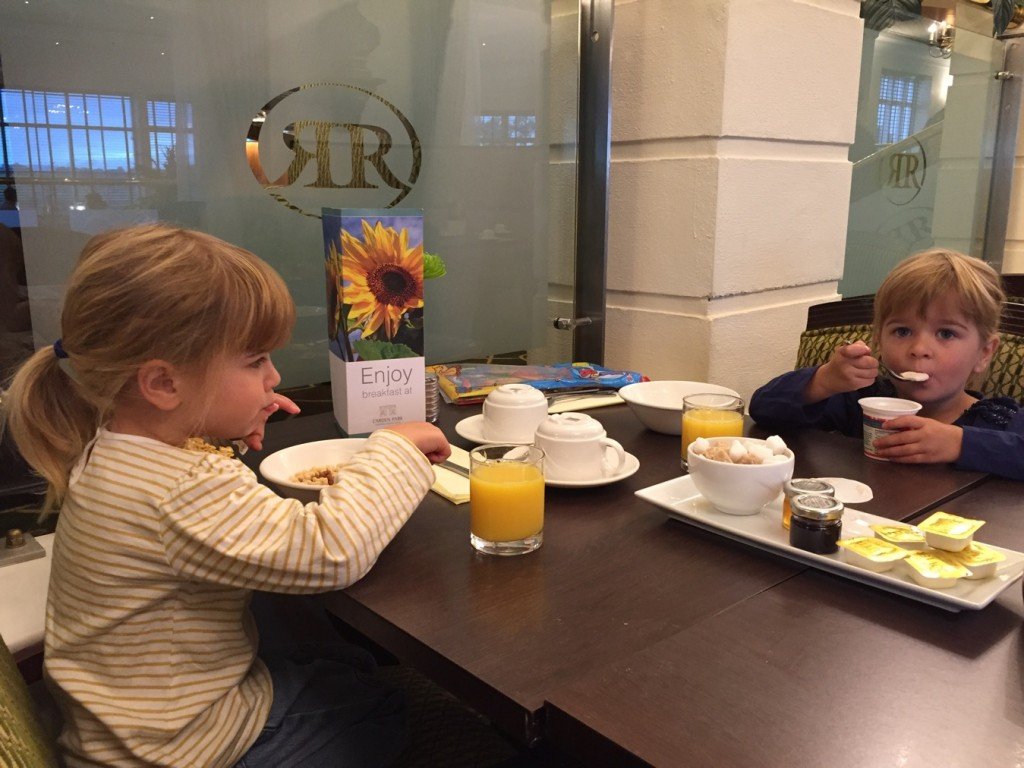 We managed to delay breakfast until 8, although breakfast is served from 7. This is very important to know when you have little ones, particularly if they wake early. We can’t be the only ones that have been camped out in the past at breakfast buffets desperate for them to open!?! The girls were happy to find Coco Pops and Rice Krispies and there was enough different types of bread to ensure any child would get the type they were used to.

Full breakfast for Hubby and an omelette for me. All types of eggs can be cooked to order and fish requests are placed with the waiting staff, otherwise it’s all self service. The food was excellent, no hard eggs or fatty stringy sausages at Carden Park!

After breakfast we made our way to the Event Station to hit some balls about. There are 14 stations in the driving range and as it was quiet we managed to use 3 of them. I don’t think either of the twins are going to give Tiger Woods a run for their money but they had lots of fun hitting the balls, just off the edge of the range and watching Daddy try and aim for the various targets. 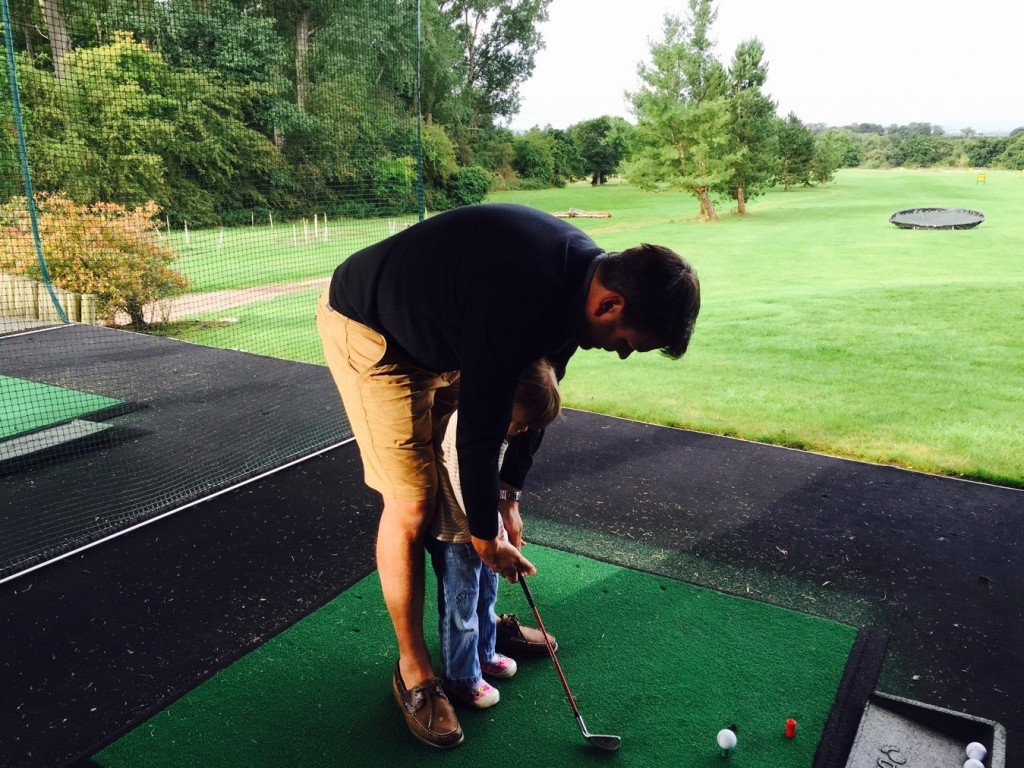 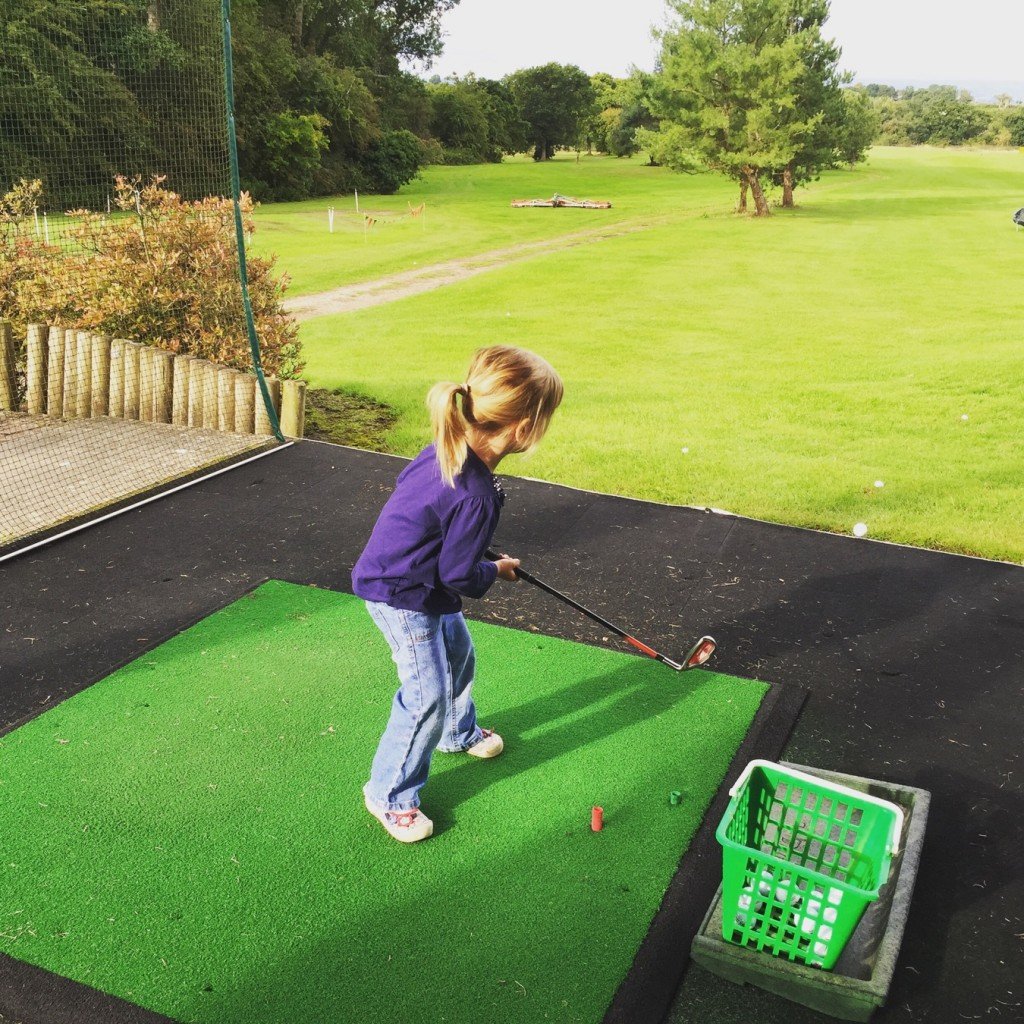 After the driving range it was time for my Spa treatment. I had been booked in for a Poultice Treatment. The treatment is a traditional Thai massage and it was 55 minutes of pure unadulterated Me Time!   I was given a fluffy robe and a pair of slippers and made my way into the treatment room.  My therapist spent some time making sure I understood what the treatment was going to feel like and checked pressure and heat throughout.  It’s a similar idea to hot stones, but at the end you get to take the poultice home with you to use in the shower.  I opted for an energising oil as I had the rest of the day with the girls to enjoy, and found the whole experience wonderful. 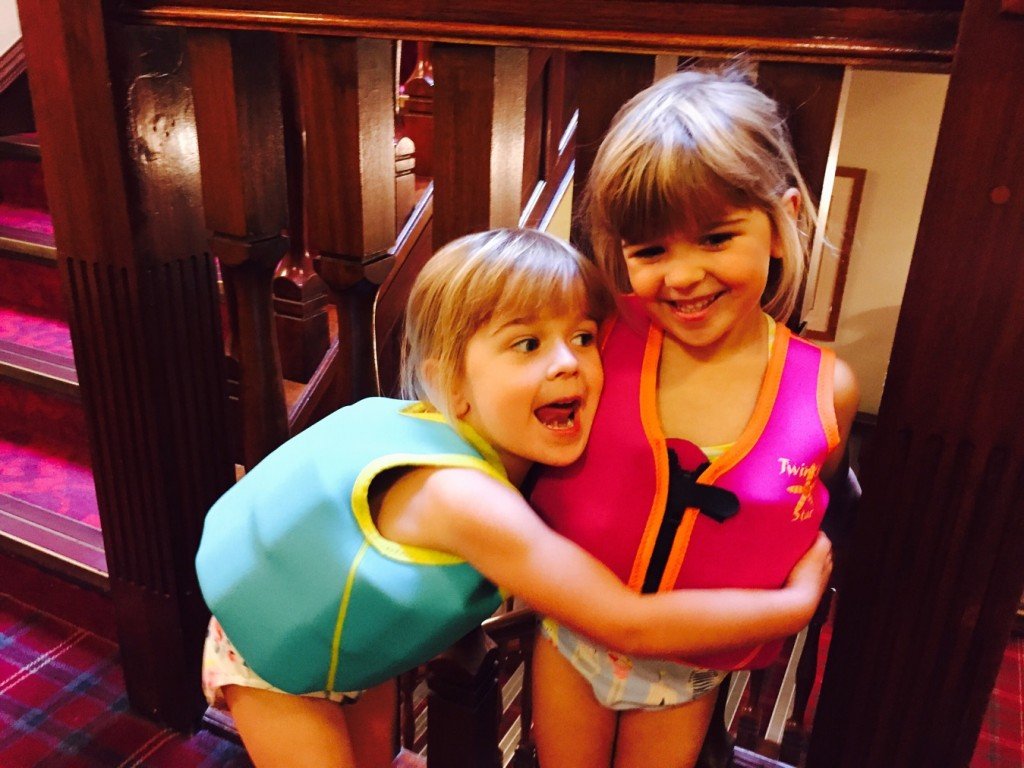 During my treatment time, hubby took the twins swimming. Thanks to the amazing float jackets from Splash About he is able to do this safely as he doesn’t have to hold both up.  The pool at Carden Park was plenty big enough for those wanting to swim (there was an adult lane) and play like the girls.  It was warm and clean and they played very happily for an hour in there.  I was sad to have missed out on the swim time as I’d have quite liked to relax on the heated chairs!

We re-grouped in Morgan’s Bar and borrowed clubs from reception to play Crazy Golf or Childrens Golf as it was renamed by mine.  Evie kept kicking my ball into the hole so I’m not entirely sure she got the point, but again we had a lovely time playing about and we laughed a lot. After a quick game of draughts (I think I will say I won!) we decided to move away from the front lawn as there was a wedding about to start and no bride wants their vows punctuated with laughter or tears. You can get both at the same time from mine! 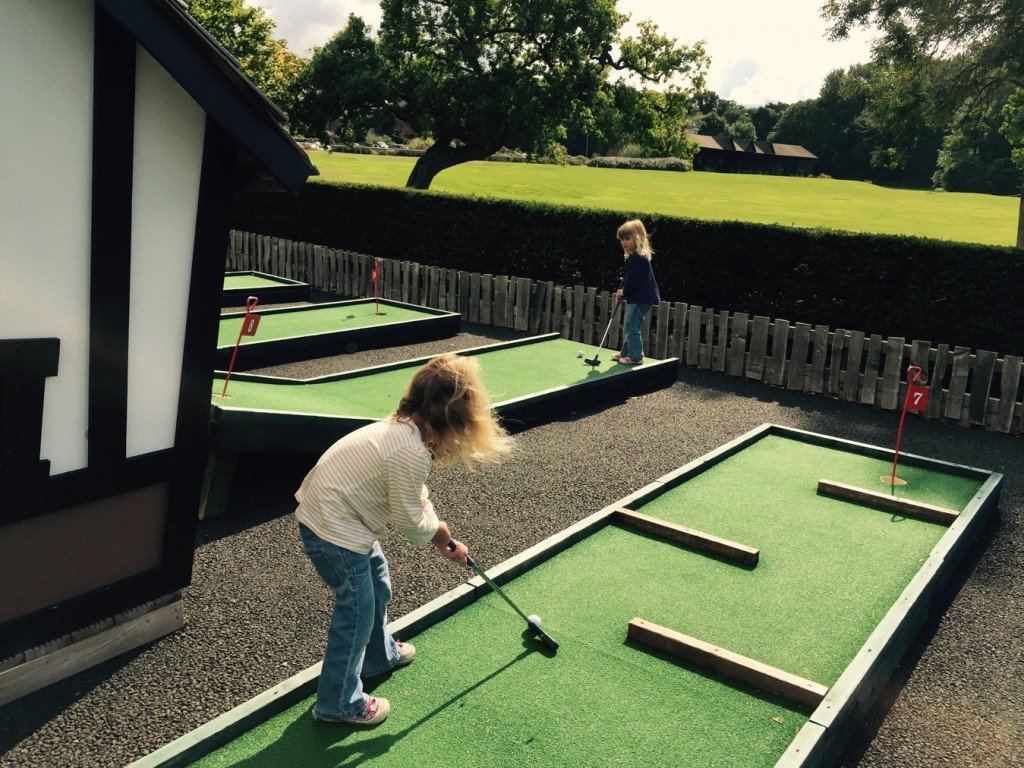 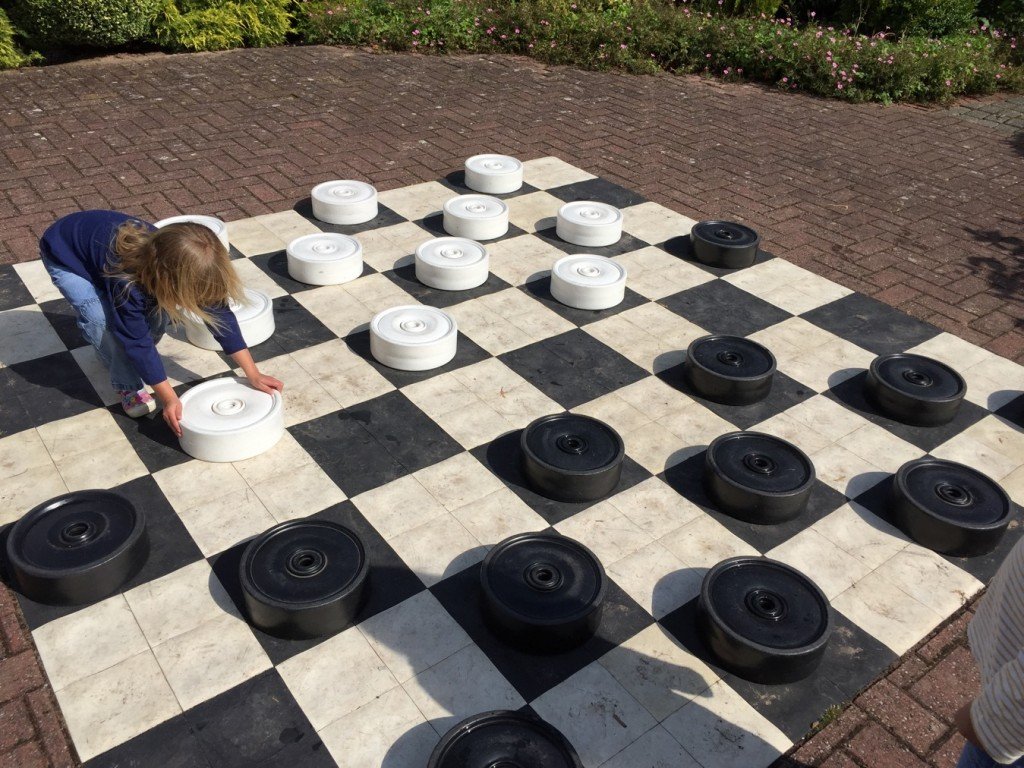 There was just time for another go on the brilliant Adventure Playground before Afternoon Tea in Morgan’s Bar. 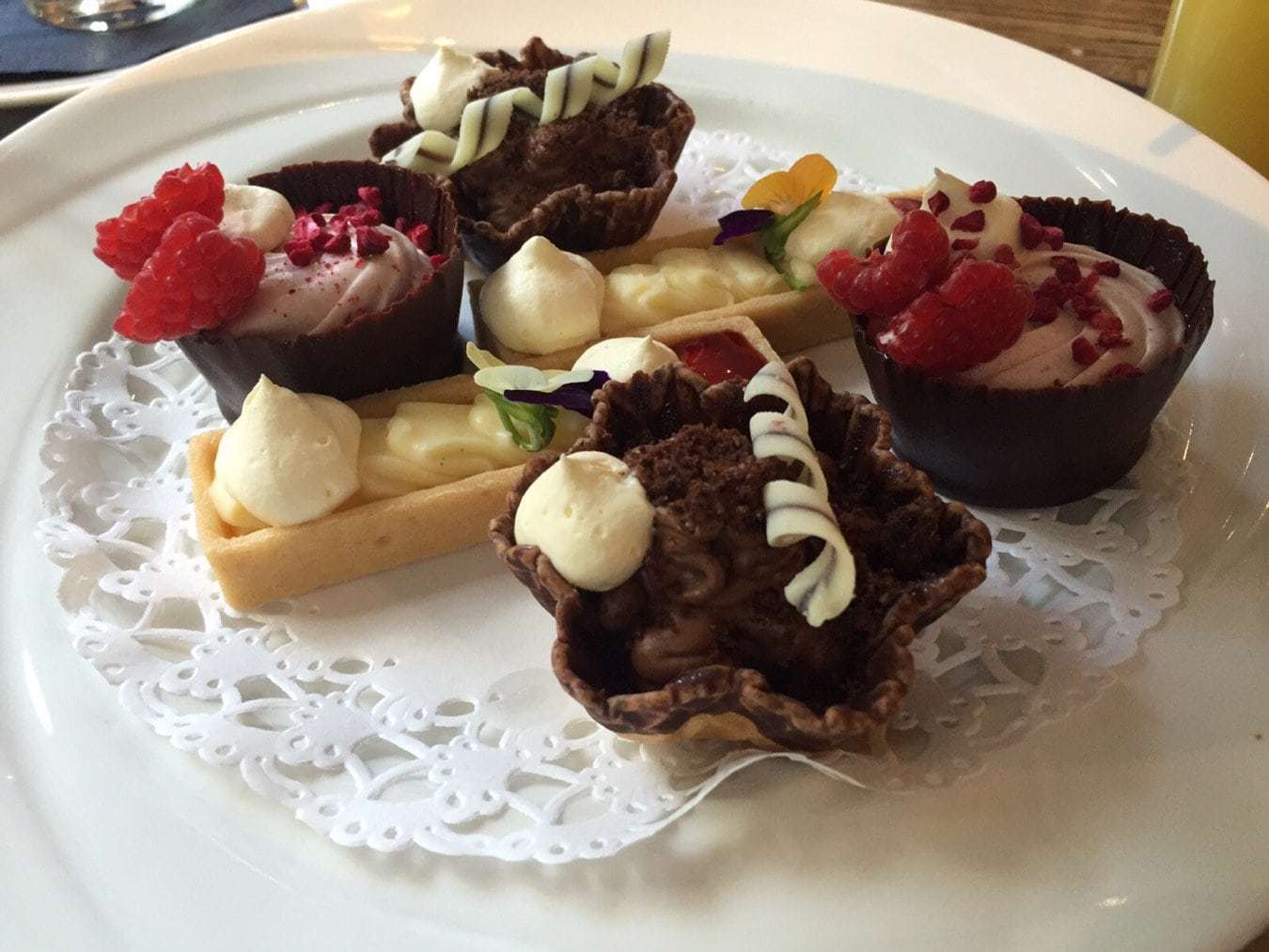 We had a fabulous 24 hours at Carden Park and the girls happily recounted their tales to their Sister at length when she got home today. Carden Park you are definitely child friendly and our Mini Travellers will happily recommend you.

Sounds like a great place to spend some special family time.

This looks fabulous Karen! I'm always looking for good places to take the kids cos even though two of them are teenagers, the place does need to be suitable for them too. Looks great...especially the food!

What a fabulous looking place. It looks like you had plenty to do and that afternoon tea looks fab

This looks like the most amazing 24 hours. I am so impressed that Carden Park is luxurious and kid-friendly. I love all your photographs. But especially the photos of the girls bouncing on the beds. Cute! Hugs Lucy xxxx

This place sounds and looks amazing!!! We could do with a weekend away xx