We were so lucky to attend another Dukes Play at Williamson Park this last week. This year however was slightly different due to the beautiful weather Lancaster is presently enjoying. Every time I attend a play at Williamson Park I’m overwhelmed by the beauty that surrounds the relevant stages where the actors perform. This time we went to see The Three Musketeers.

On the way to Williamson park we briefly summarised the novel to the children and at that time I must admit to being slightly concerned as to how play would be adapted to modern day life and how it would keep the children entertained.
This new adaptation of the classic swashbuckling story has been written by the Olivier Award nominated playwright Hattie Naylor and features Lucy Parkinson (aka renowned drag king, LoUis CYfer) as D’Artagnan. 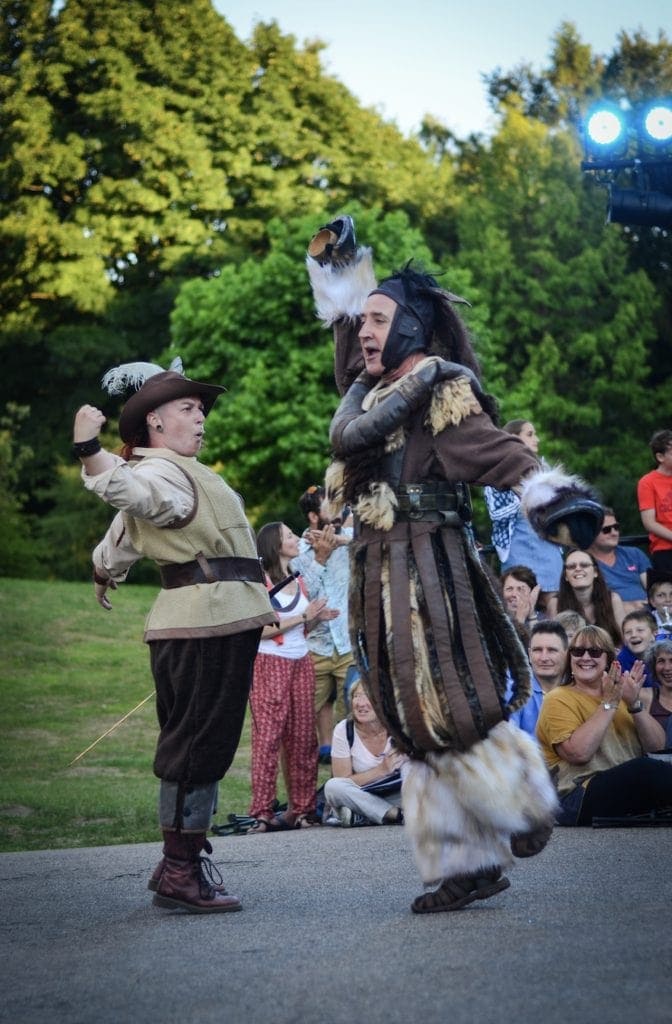 There was no reason for me to worry though, the play was brought right up today firstly with D’Artagnan being played by a woman and finally with the actors doing the ‘floss’ whilst also performing various dance routines to lots of up-to-date classics.
The play takes place over 6 scenes with a short interval after scene 3.
The play started with actors dressed as sheep playfully and interactively making their way through through the crowds. The children loved this part and it certainly ensured that it got off to a good start. It was also where we met D’Artagnan and her horse Planchet. D’Artagnan tells her mother that she is leaving because she wants to become a Musketeer and she and Planchet leave for Paris. Planchet (with fantastic one liners) was a keen favourite throughout the play for the children and adults alike, played by Christopher Bianchi who was actually fantastic in both his roles (popping up as the baddy Cardinal Richalieux later in the play).
King Louis, was wonderfully played by Delme Thomas, and his camp character portrayal had the audience in stitches – we particularly loved the colour of his hair and eyebrows!
The play moves on every scene and as we moved into the woods, the play moved to England and we watched lots of the action unfold. The Three Musketeers between them had fantastic energy and kept it going throughout.
In the finale we were invited to the orange ball where the actors all wore fabulous costumes, especially and to no surprise King Louis. It was in this scene that the children really relished the modernised performance of the play (and were able to do some disco dancing of their own). Throughout the play we laughed and cheered and booed in the relevant places. I can also admit that I almost shed a tear when D’Artagnan revealed her secret at the end of the show. This is a play not to be missed and I can’t wait for the next one!
Tips: Arrive early and take a picnic tea (weather dependant!)
Take a picnic blanket to sit on or even small chairs.
Take a jacket as as the sun goes down the temperature starts to cool down.

The Three Musketeers will be in Williamson Park, Lancaster from 3 July-18 August. For more info visit: www.dukes-lancaster.org

The Three Musketeers is sponsored by Black Bear IT Solutions, Lancaster

NB: Pauline and her family received tickets to see The Three Musketeers but all views and opinions are her own.