Believe it or not when you visit Orlando you can have too much Disney! Orlando has so much more to offer than Walt Disney World such as Kennedy Space Centre, LegoLand,  Universal Studios and also a trip to see Orlando Magic with Kids!

One of the best evenings we had though didn’t involve a single rollercoaster, firework or themed restaurant!  Situated just off the main I4 highway a 25-minute drive from the Disney resorts the 18,000 capacity Amway Centre is one of the most hi tech arenas in the world and home to the Orlando Magic NBA basketball team. Remember “Shaq”? Well he used to play for Orlando back in the 1990’s. The centre was easy to find and there were plenty of parking options. You can pre book parking but I am not sure it’s necessary.

The whole family of two parents, three girls under 5yrs and two grandparents went along to see the game against the Milwaukee Bucks which started at 7pm on a Tuesday evening and had a blast.

First of all, it’s not a game. It’s a show. There is absolutely no comparison to going to a football, rugby or even basketball match in the UK. None.

The crowd is made up of families, teenagers and interestingly a very high proportion of women. It’s a night out for all. Like going to the movies. There are 40+ home games a year and the whole occasion was a big social event where friends got together and “hung out” while watching the show or just catching up and people.

The seats are set out so it is easy for you to come and go as you please. The game itself at times feels incidental with less than half the seats occupied until the last 20 minutes. The entertainment in-between the actual match often gets bigger cheers than a three pointer or slam dunk. We had an acrobatic trampoline basketball display, a magician, a quick change artist and of course cheerleaders. 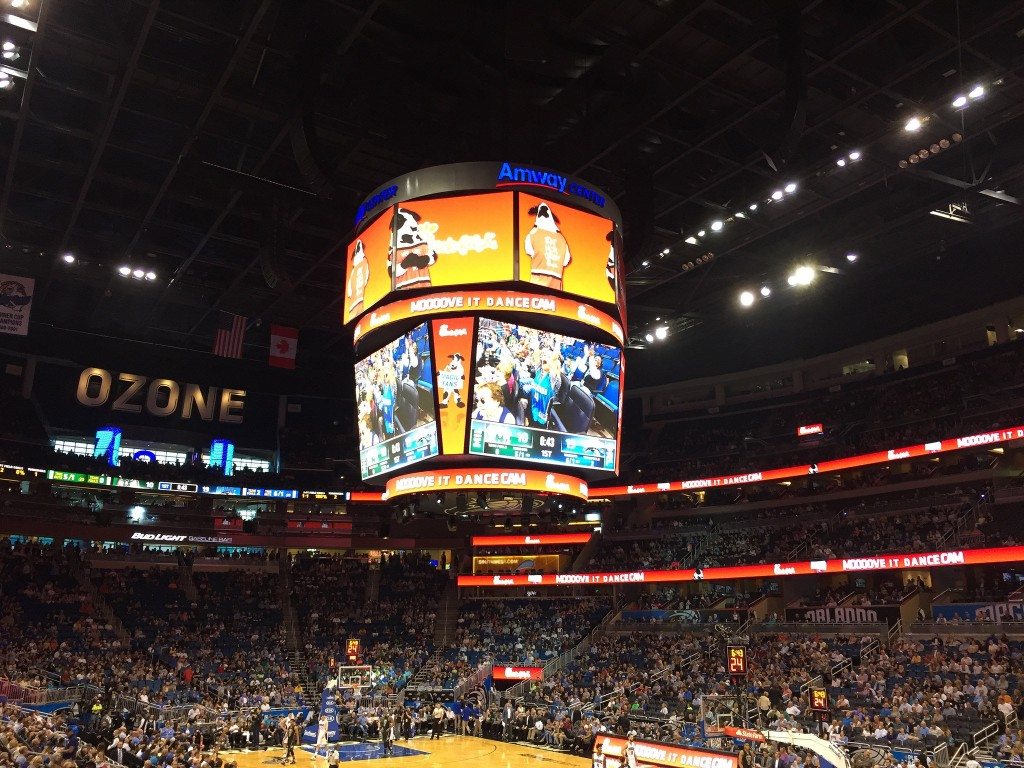 It’s a cocktail of entertainment that kept us all entertained even our four-year-old girls who whooped and cheered for every basket. Something for everyone. The girls of course also loved the performers as we expected but they also really enjoyed watching the game both live and on the biggest HD screen hanging over the court you have ever seen. The grandparents, although bamboozled by the rules of the game, enjoyed it far more than they ever thought they would. I think once we worked out the rules didn’t really matter and that the next serving of popcorn or appearance or the cheerleaders was far more important they relaxed into it.

I just loved the whole thing. I am a big NFL fan and have always been fascinated by the USA and the whole way of life. Same language but that really is as far as the similarities go.

We would recommend a trip to watch Orlando Magic with kids to anyone visiting Orlando as a chance to experience something so different to what we are served up at home. It’s a party, a gathering, a game and a show all in one evening.

NB: We received tickets to watch Orlando Magic with Kids but all views are our own.

Why didnt we do this, omg the boys would have just loved it, now we need to go back to go to a game x