Myself and my six year old son Freddie have recently returned from the Manchester City Club Tour. Depending on the day of the tour (may change on match days) you can park right beside the City Store which is the meeting point for the start of the tour. Access for prams and wheelchairs is excellent throughout the day. At the start of the tour the guides introduced themselves and gave us the necessary talks on for fire alarm procedures etc. We were led by Lynn and John who walked us from the City Store to the main entrance of the stadium. It was a short walk but uncovered so be prepared for bad weather. Once at the main entrance in the Colin Bell Stand we were given a short history lesson about the club and it soon became apparent how much the fans and ex players were valued by the club and its new owners. We were then taken to the best seats in the house by the way of the Chairman’s Club. The Chairman’s club is Manchester City’s most prestigious of the match day experiences and we got shown were the owner and chairman and their guests do their business on match days. It was nice to see how the other half live. Once out into the stadium itself we got to sit in the best seats in the house. The seats were leather all had fantastic views and were even heated to make sure the guests were comfortable. Whilst here we were given some more history which took us back to when the stadium was used for the Commonwealth games and the work which was undertaken to get it suitable for usage by the club. 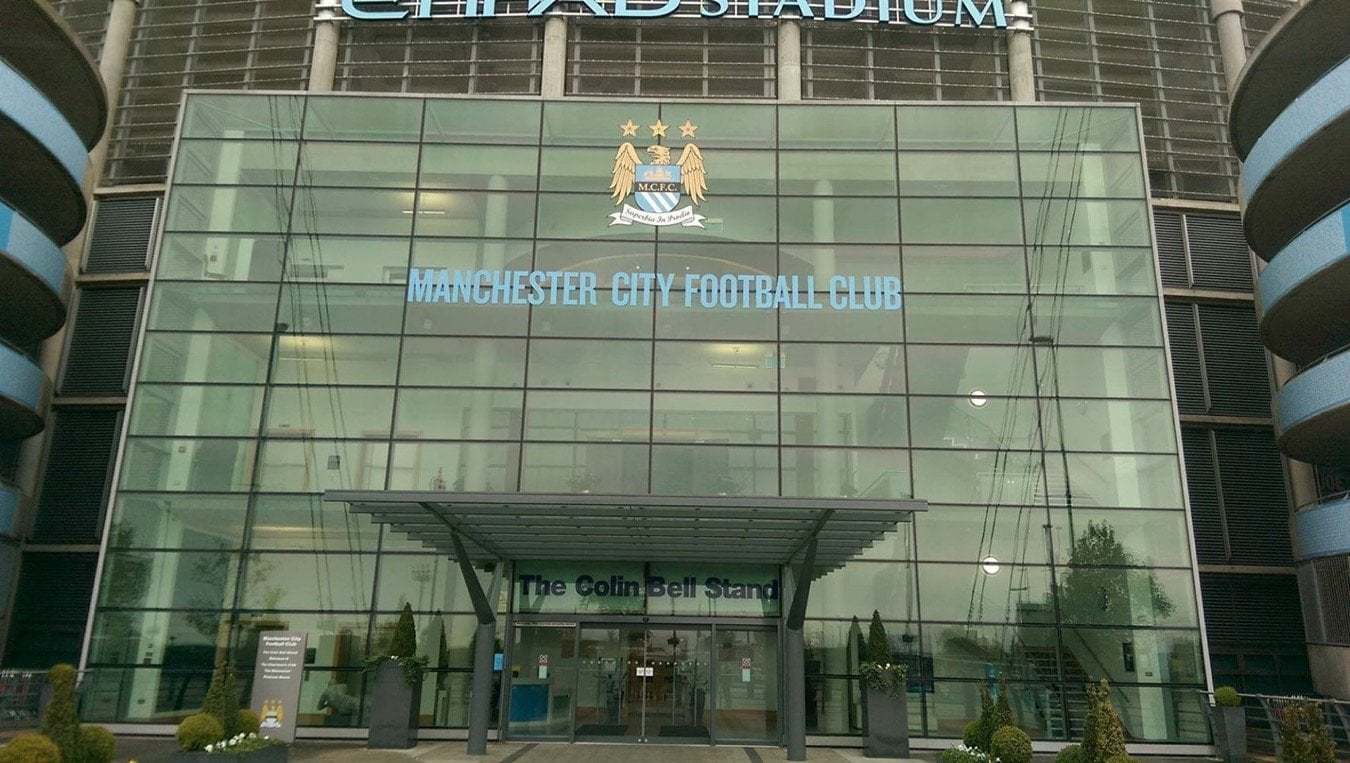 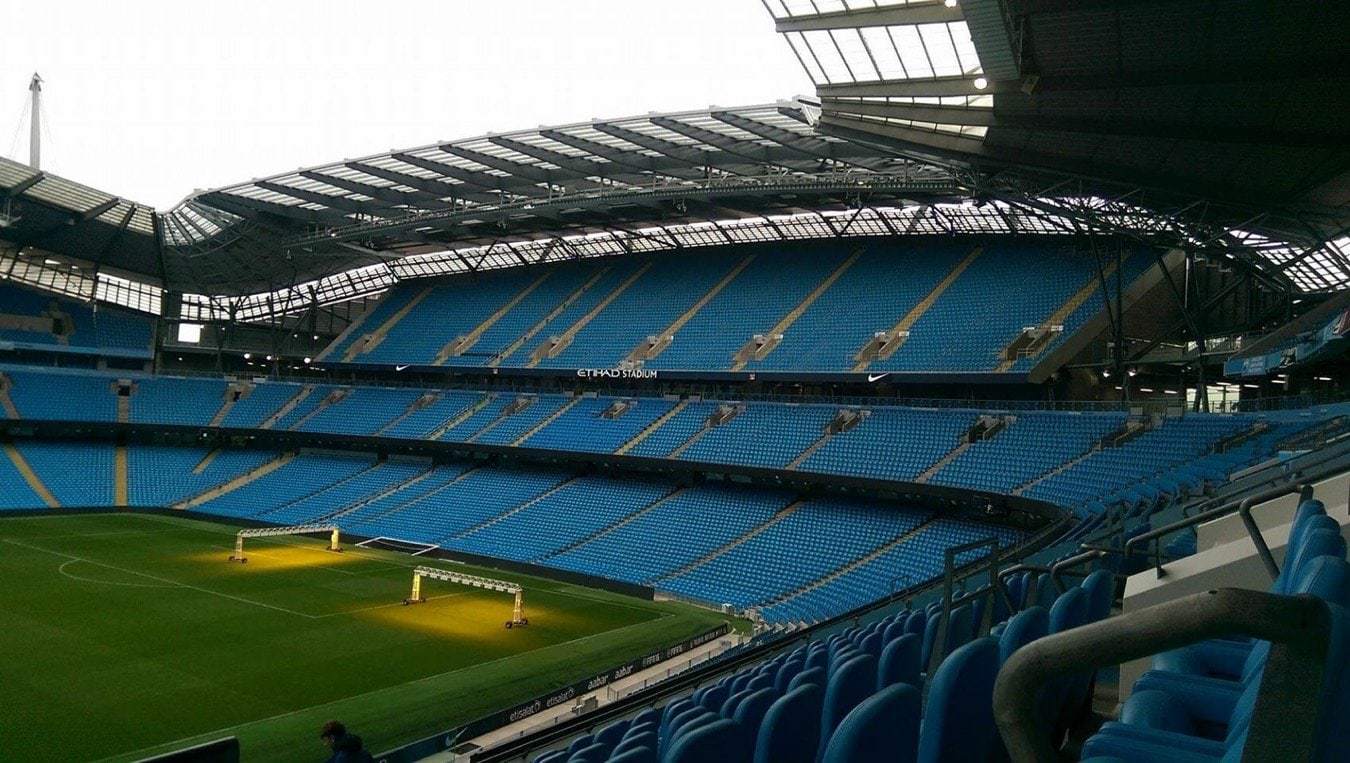 After this we were taken to the press room which is where all the press conferences are held. We were given some interesting information about what goes on here and people were given the chance to have photos taken and Freddie even took part in a mock press conference which was a really nice touch and he loved it. From here we were just a short walk from the warm up room which as the name suggests is where the players warm up before games. In this room there was a goal and all the kids got chance to take a shot at goal which they all seemed to enjoy. The next part of the tour was Freddie’s favorite and it was when we got taken into the changing rooms. We all got chance to sit in the actual seats the players get changed in and have our pictures taken with their shirts hung up ready for the next match. From here we went to my favorite part of the tour and that was the tunnel. We all got to stand in the tunnel whilst the sound of the crowd was played at the noise levels experienced by the players on derby day before walking out onto the pitch. It gave a really exhilarating experience of how daunting that must be when the stadium is full. 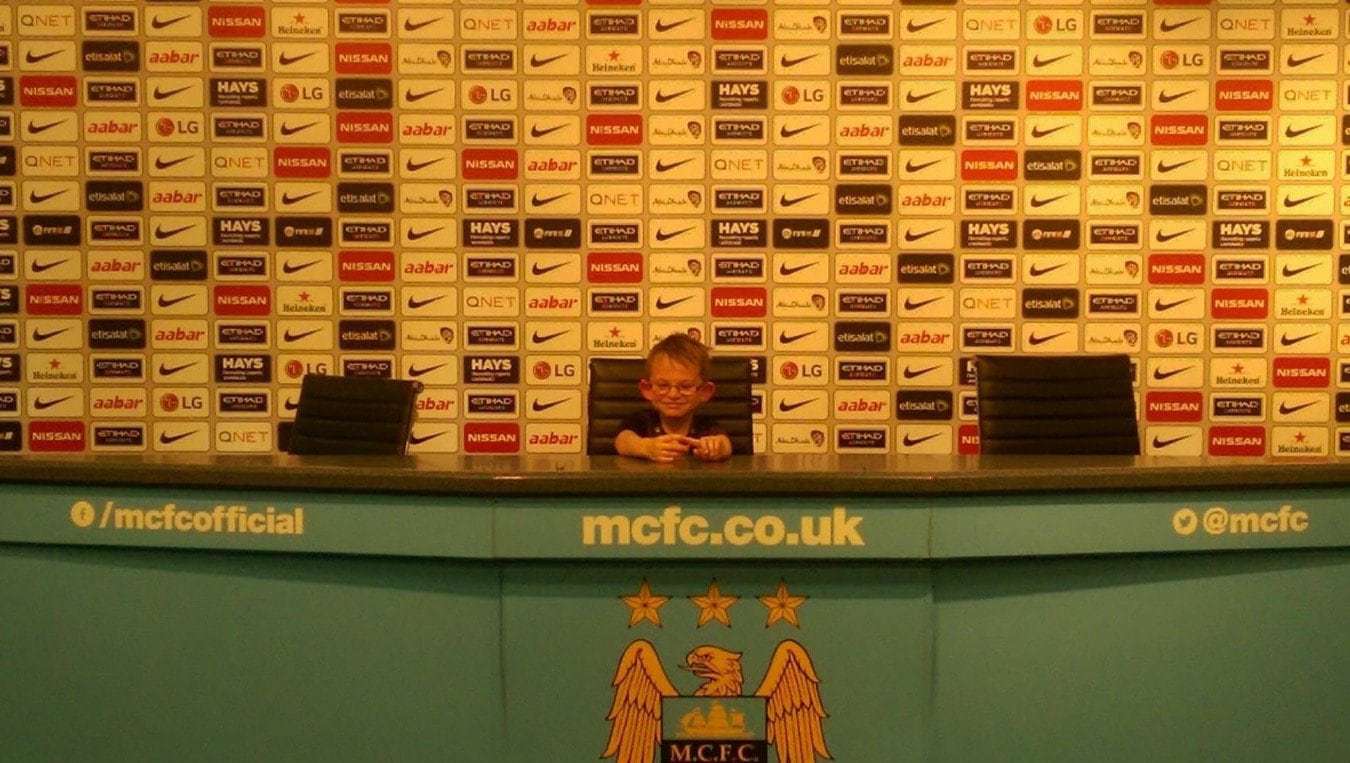 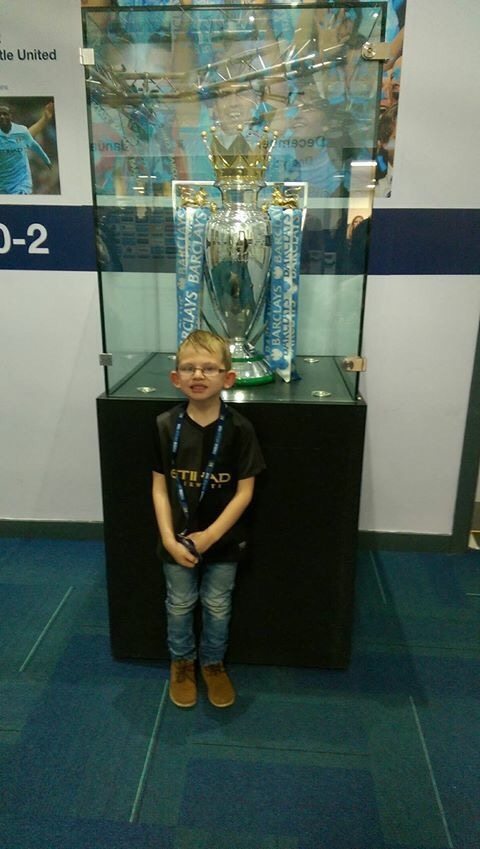 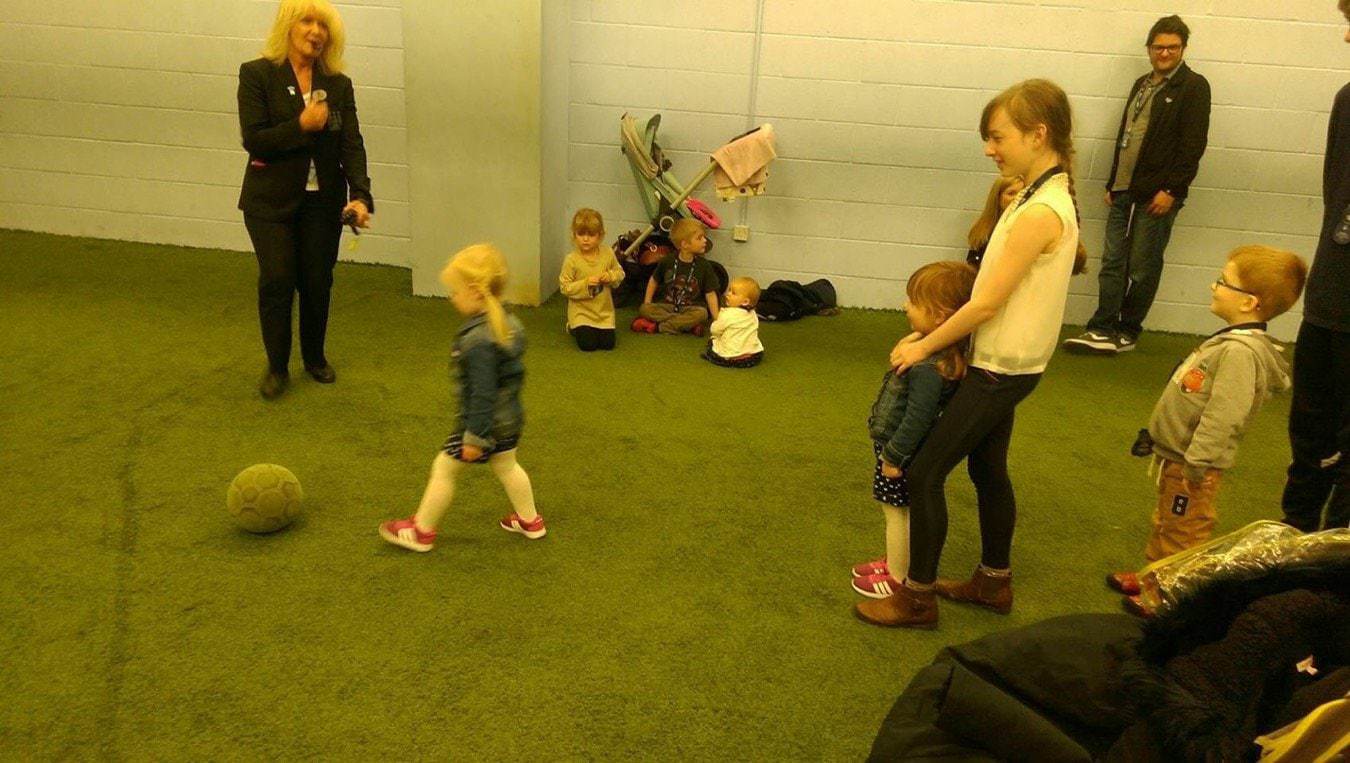 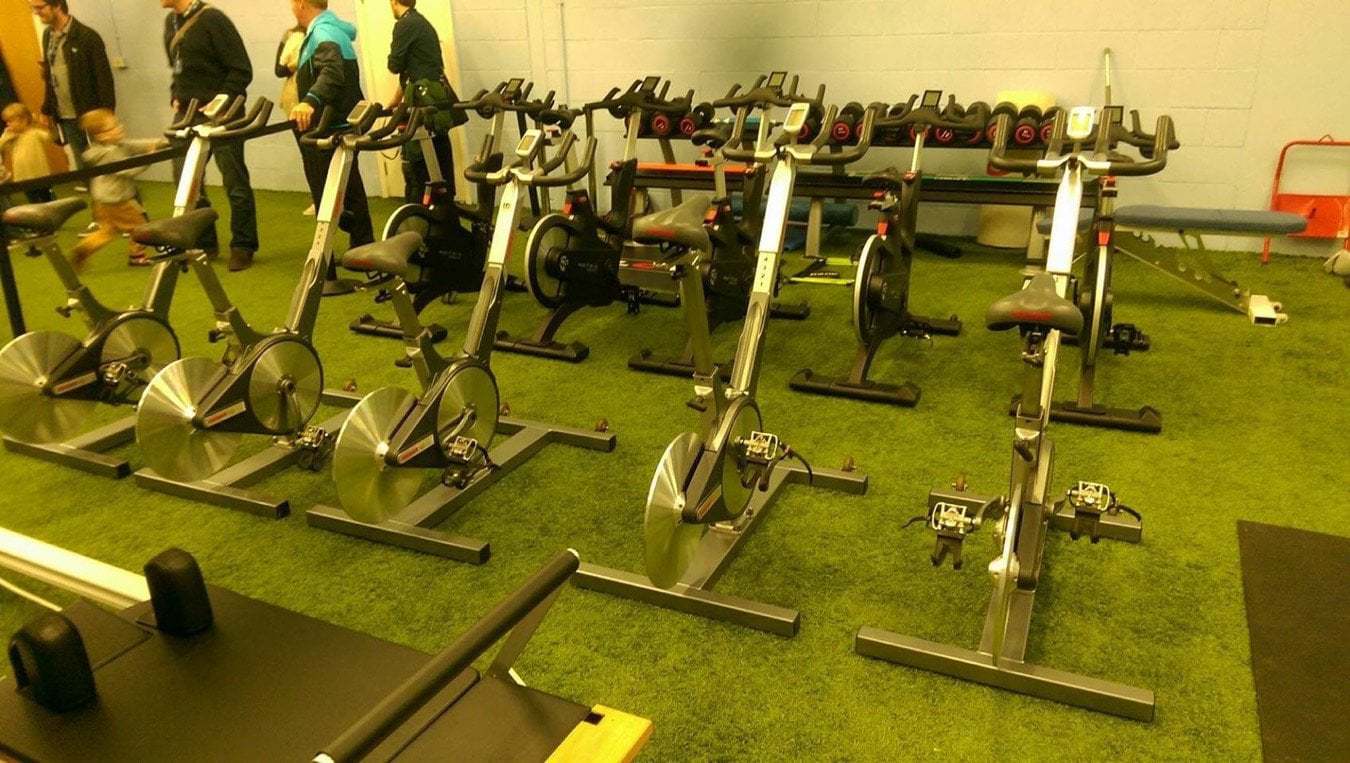 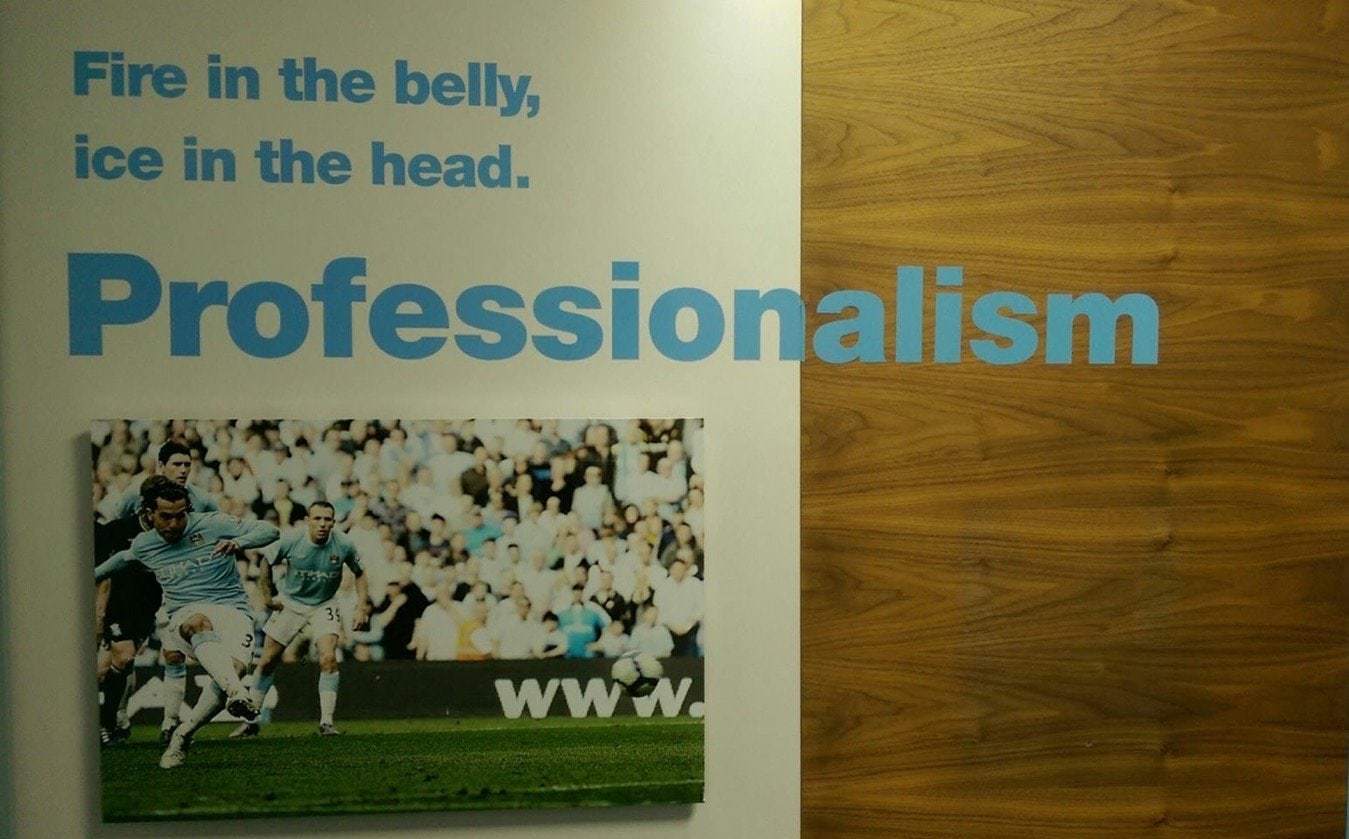 Whilst on the pitch we got to sit in the dugouts whilst given lots more interesting information about the football club. At the end of the tour the kids all got to meet the Man City mascots which topped off a fabulous few hours which we both thoroughly enjoyed. Coming up at half term the club are doing some special interactive activities on the tours including treasure hunts and there are opportunities to win match day tickets for those brave enough to wear Halloween costumes. The cost of these tours are £16 for adults and £10 with concessions. The tours run daily from 10.30am-15.30 and last approximately 90 minutes. You can book through the website or by calling 0161 444 1894.  The club have also stated doing kids birthday parties which includes the city tour plus kids pay food and a special cake. You can tailor this experience by including souvenir photos, an audience with the mascots, personalised shirts and an incredible opportunity to be picked up and taken to the party by the official Manchester City players coach. Further details on this can be discussed on the above number. 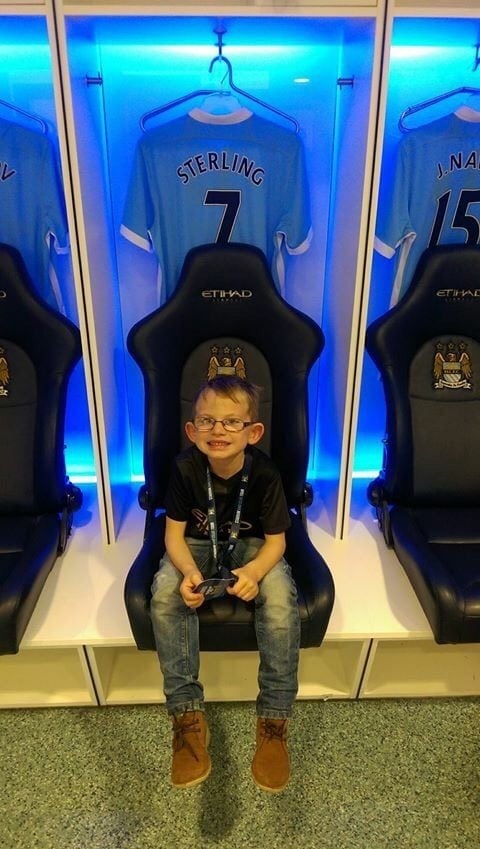 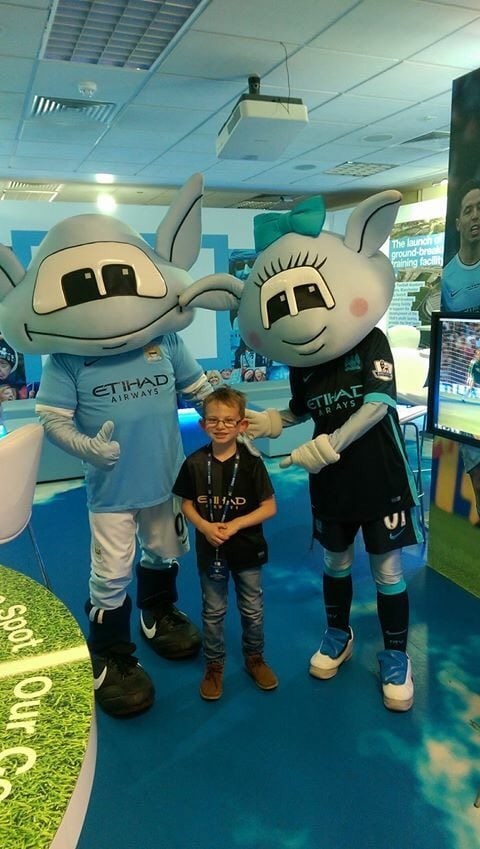 NB: Keith and Freddie visited the Club as guests of Manchester City on behalf of Mini Travellers, and whist they are Manchester City fans, all views all their (unbiased own!).