Is it fair to say that British Airways is now a Budget Airline?

There has been a lot of changes over at British Airway and having taken four flights with British Airways over a long weekend away in Tuscany, I feel like we experienced both the lows and the highs that the carrier can offer. (you can read the positive story here!)

I have of course read about some some of the changes to British Airways over the last few years, but having recently flown British Airways to Oman (admittedly in Business Class with air miles) and British Airways to Corsica and Corfu two years running I hadn’t paid a lot of attention as I had always had a fantastic experience on board.  So I was pretty excited to be flying BA from LHR to Pisa for a bloggers trip to Tuscany.

After booking the flights from LHR to Pisa it was only closer to the time that Sarah and I realised that we would have to travel the day before or get a train extremely early from up North to make the flight out of LHR at 11.40. After only a little investigation Sarah happily rang me and said she’d found flights for £35 return with our airmiles from Manchester to LHR. Perfect I thought. Two British Airways flights rather than trains and tubes and taxis. What could go wrong?

Well a lot it appears. Sadly it seemed impossible to link our flights before buying them as the second leg out to Pisa had already been purchased. I tried a few times to work out online how to do it but couldn’t work it out (and I’m fairly good at booking flights) and didn’t want to lose the flights as I could see there was only 2 left. The phone wasn’t being answered so I just booked them. Not to worry I thought they will sort it out at the airport and at least we will be able to check our bags all the way through – but this sadly wasn’t to be either.

On arrival at Manchester airport at just before 5am for a 6.30 internal flight I was met with a very large queue that didn’t seem to be moving quickly at all. I don’t know what if anything was wrong, no-one said, but it took until almost 5.50 to get to the front of the British Airways check-in queue.

On presenting our passports and boarding passes we asked for our bags to be checked through to Pisa as we had a connecting British Airways flight, only to be informed this could not be done as we hadn’t already linked the flights. I did try to explain that this wasn’t an option when we booked them but was met with a rather terse reply that it simply could not be done. It can I thought I’d done it before but the queue behind me would not have thanked me for a debate.

In fairness to the person checking us in there was a lot of cross people about, and time was of the essence.  Perhaps British Airways you need more than 4 staff checking people in, at this busy time of the morning.

Thank goodness we had paid extra for speedy security with our parking or we actually wouldn’t have made it to the flight on time.

As we had already checked in online the day before and chosen our seats together we didn’t check the boarding passes when they were given to us. So it was only when we were standing in the queue to board the plane that we realised that our chosen seats had been reallocated and we were in fact sitting 12 rows apart and no-one had bothered to mention it.

As I was standing in the queue to board I did actually say out loud –  we should have flown Ryanair. Who ever thought you’d say that. Ever! The thing is that if we’d been flying Ryanair I’d have not expected much and wouldn’t have been disappointed. In fact I’m now usually pleasantly surprised by Ryanair as my expectations start so slow. British Airways people don’t like it when their expectations aren’t met – you should know that you used to be so good at it.

To be fair all this frustration wasn’t helped by the fact that due to the delays at check in we hadn’t had time for coffee or some breakfast. Not to worry I thought at the time,  they will give me a coffee and a pastry at least on the flight: this is British Airways after all. But sadly not. The final nail in the coffin for my British Airways experience that morning was that in-flight food and drink is no longer provided to economy customers, just an M&S menu. So I sat and typed this part of this ‘rant’ in row 5, just behind business class, I could smell the coffee and the freshly warmed pastries, I was definitely wondering  whether I should have flown Ryanair!

Come on British Airways I thought you’re better than this! 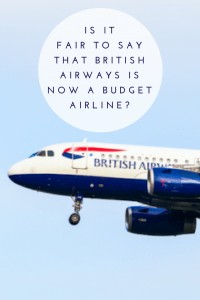 I certainly would have expected more. I can understand why you are upset. Flying is pretty stressful and it should be the airlines duty to make it less stressful for you. How frustrating that you didn't get treated as you would expect. Equally I love your other BA story though :)

Oh dear, that’s not a good experience. I was thinking of flying with BA to Malaga in the summer, when they start their new route. I’ll seriously have to check everything with a fine tooth comb before I book!!

Totally agree! After our experiences flying BA to Los Angeles we never ever book with them now.