This year we made the decision to not go abroad for our summer holiday. The biggest reason was that our youngest, who is 2, is a bit of a handful and requires a lot of attention. We thought that it made sense to avoid airports and flights and opted to holiday in the UK instead.

After discussing it over, we decided why not try up North…I know the age old saying ‘it’s grim up North’, but Hannah has happy memories of her childhood up there, being Northern herself! 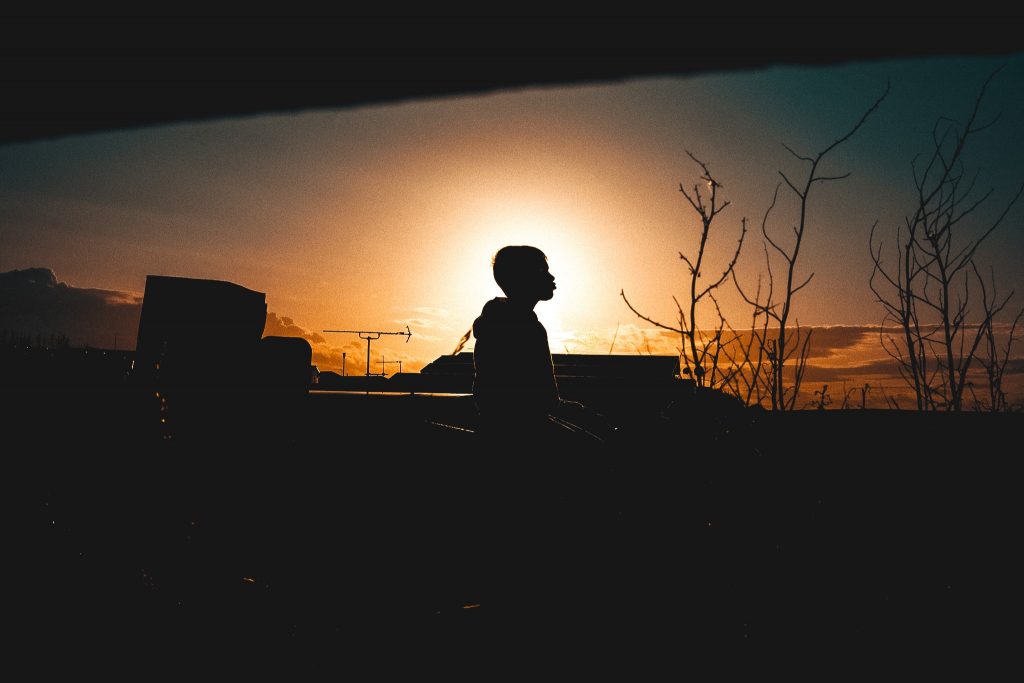 We were also looking for somewhere that would keep the kids entertained for as long as they were awake and we found the perfect place to stay as a family.

Situated along a stunning coastline that is steeped in history, Haven Thornwick Bay Holiday Village was as far North as we wanted to travel. It was close to places we wanted to visit (such as York and Scarborough) and provided a multitude of activities to keep the kids entertained. 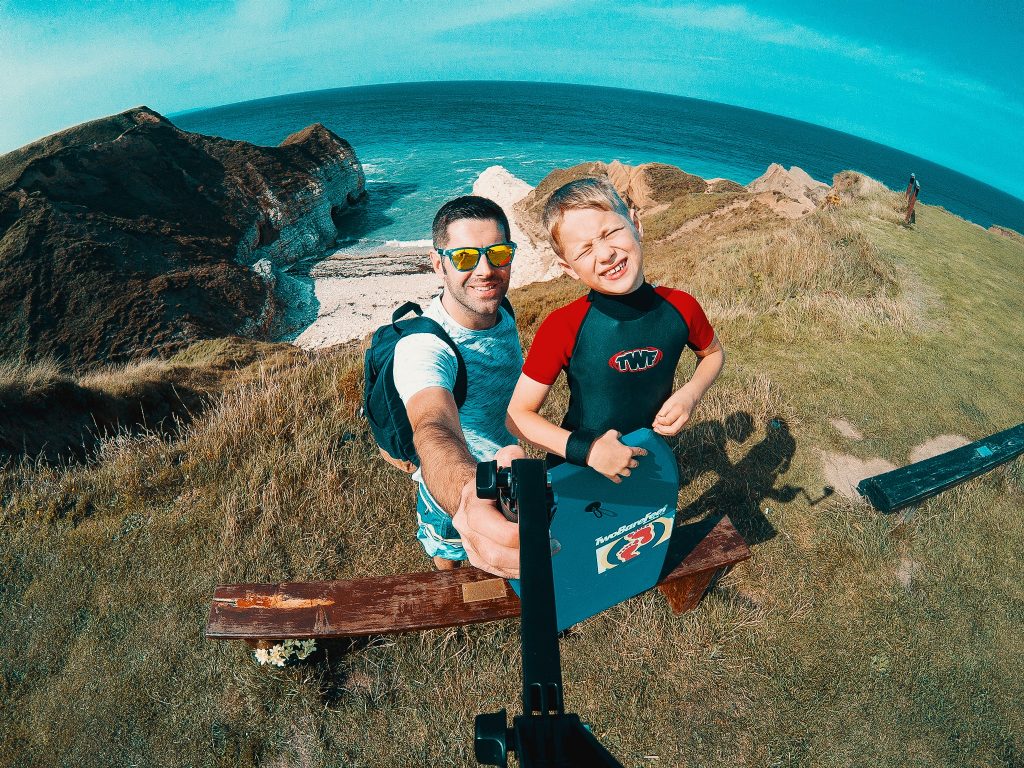 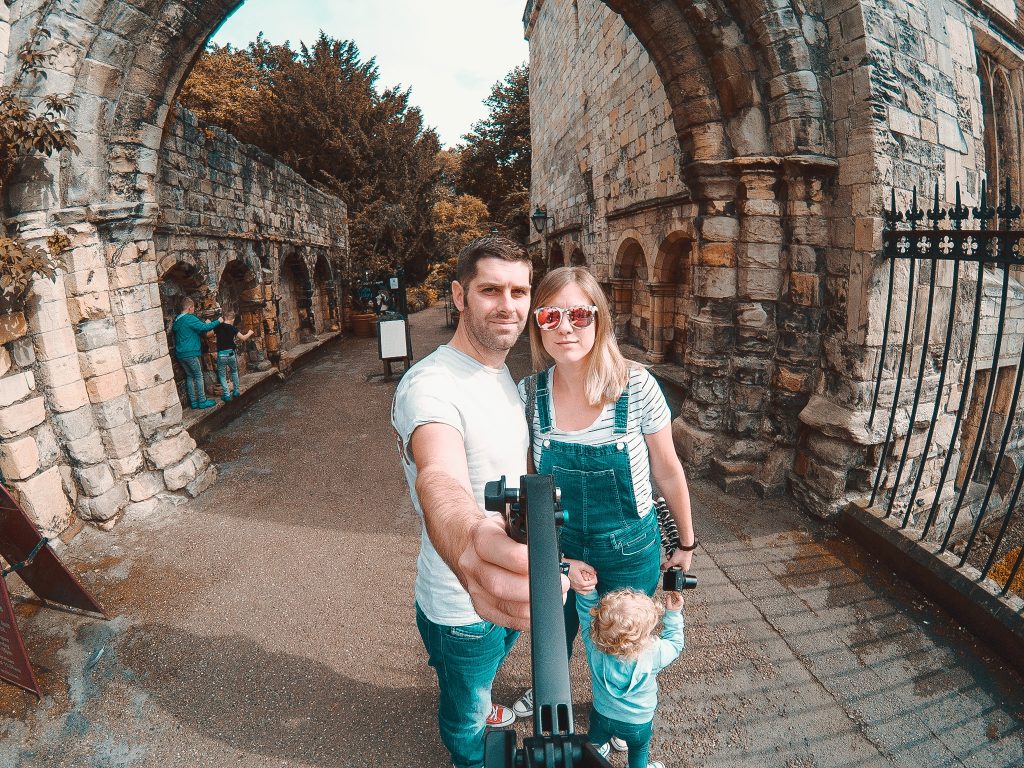 Thornwick Bay is the newest member of the Haven family and is advertised as being unlike any of their other locations.

We stayed in a Platinum 3 bedroom Caravan with decking which had its own drive with room for two cars. Our caravan had a lovely sized lounge, electric fire, central heating, a fully fitted kitchen including everything bar a washing machine/dishwasher and two toilets (one shower). 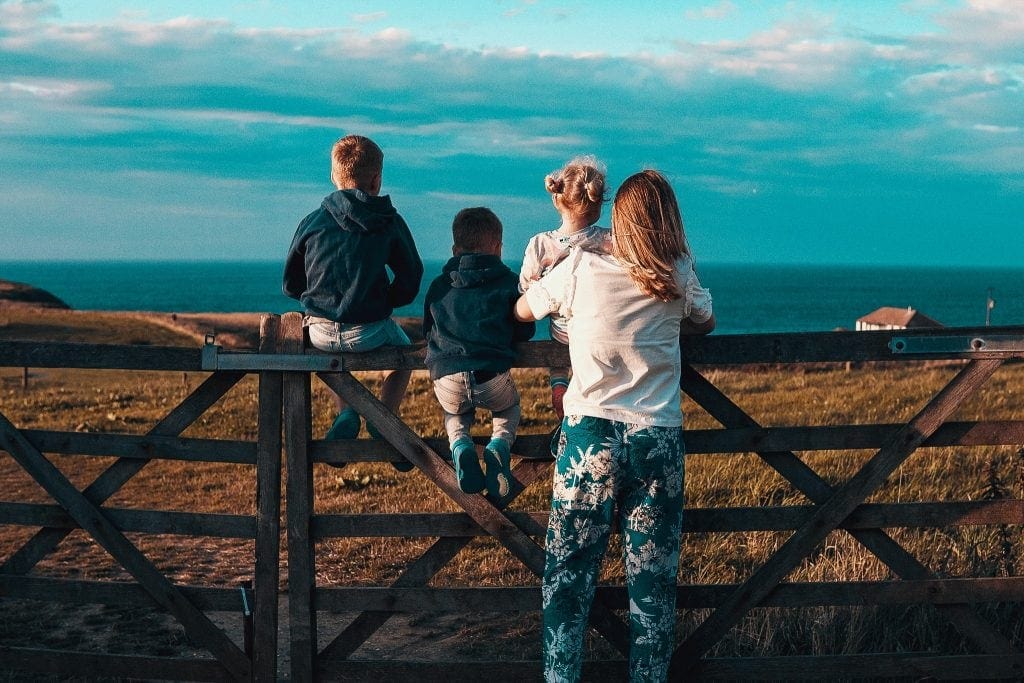 On-site it has most of the facilities you would need including a restaurant, fish and chip shop, launderette (which we didn’t find or use), a shop (with stocked items similar to what you find in a local small Co-Op type store) and plenty for the kids to do.

Before we got to Haven we had an activity bundle which consisted of 48 passes. Each activity required a different amount of passes i.e. Aqua Gliders required 1 pass whereas the Segways needed 5 passes but some of the Nature Rockz activities were free. 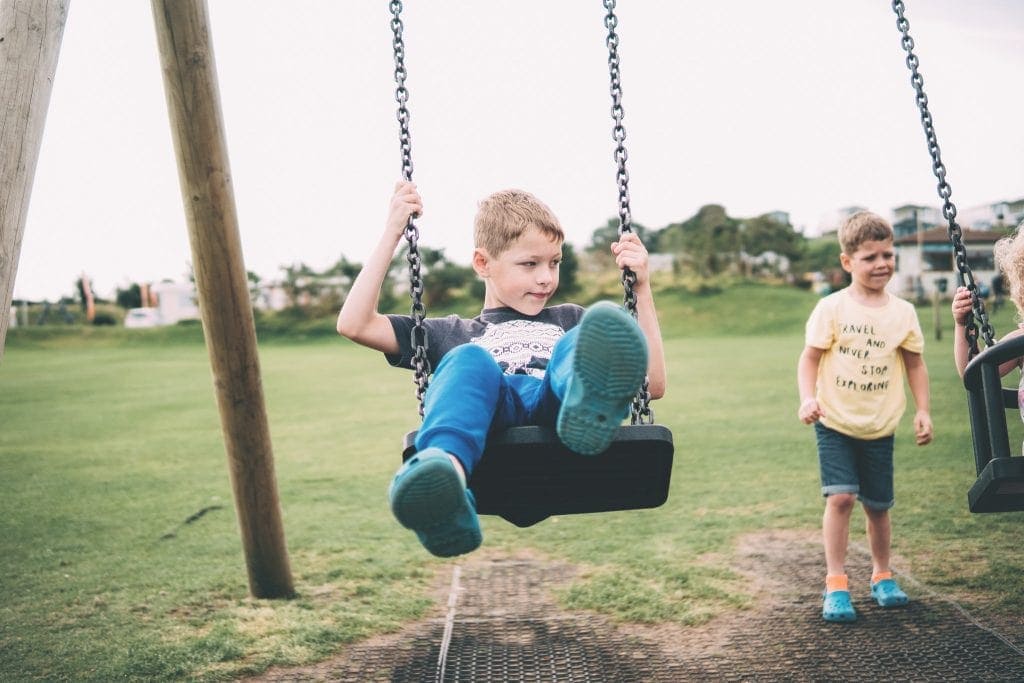 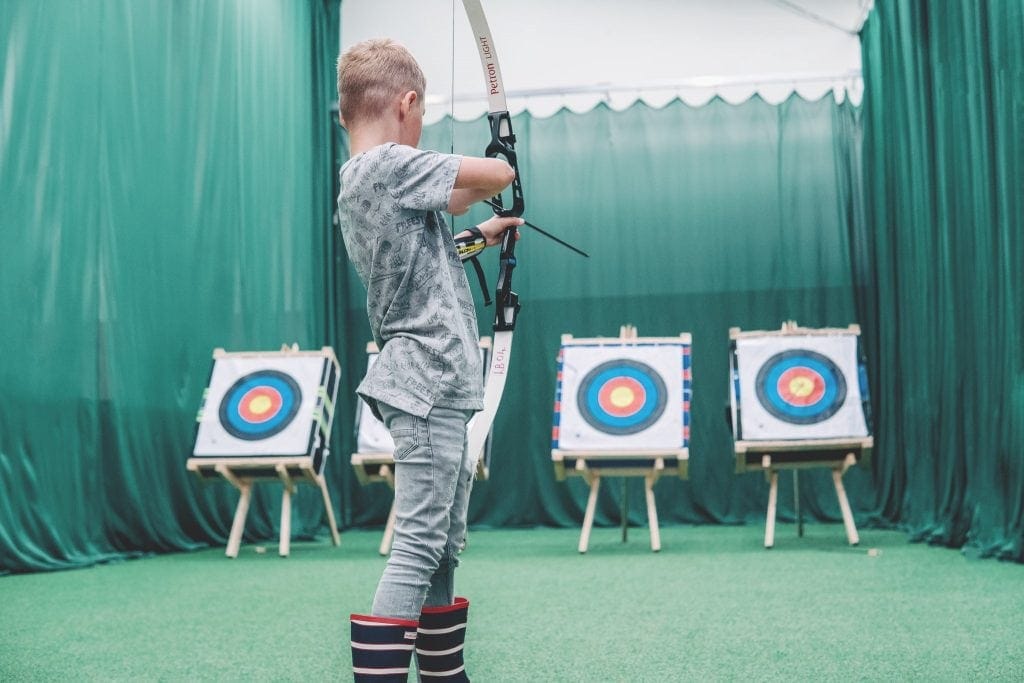 Unfortunately some of the bigger activities like Segways were aged 12 and over so we couldn’t try those out and neither Hannah or I fancied doing it on our own!

But here is a list of the activities we did whilst there:

Archery (6 and over – 45 mins) – Only my eldest could do this. The teacher was brilliant and anyone who needed a little more tuition (like my son) she was brilliant with and gave them extra time.

Football (5-9 year olds – 45 minutes) – Both my boys did the academy and would have liked to have had more sessions but we ran out of time.

Pool Party (5-7 and 8 and over – 30 mins) – Although this is split into 2 different age ranges its still the same inflatable in the same pool, but obviously it stops the older ones from distracting the younger less confident ones. Given it had the name party in it, we were expecting some sort of music to be playing, but the kids really enjoyed it.

Learn2swim (4 years+) – Tobias is still not a swimmer and lacks confidence and we hoped that this session would help build on that. It was very repetitive and lots of waiting for other children, but he enjoyed it all the same.

Learn2bike (2.5-6 years old – 30 mins) – Although this is aimed at 2.5 – 6 year olds, it’s definitely more suited to the younger ones as they started out on balance bikes. My 5 year old was one of the oldest there by a few months. 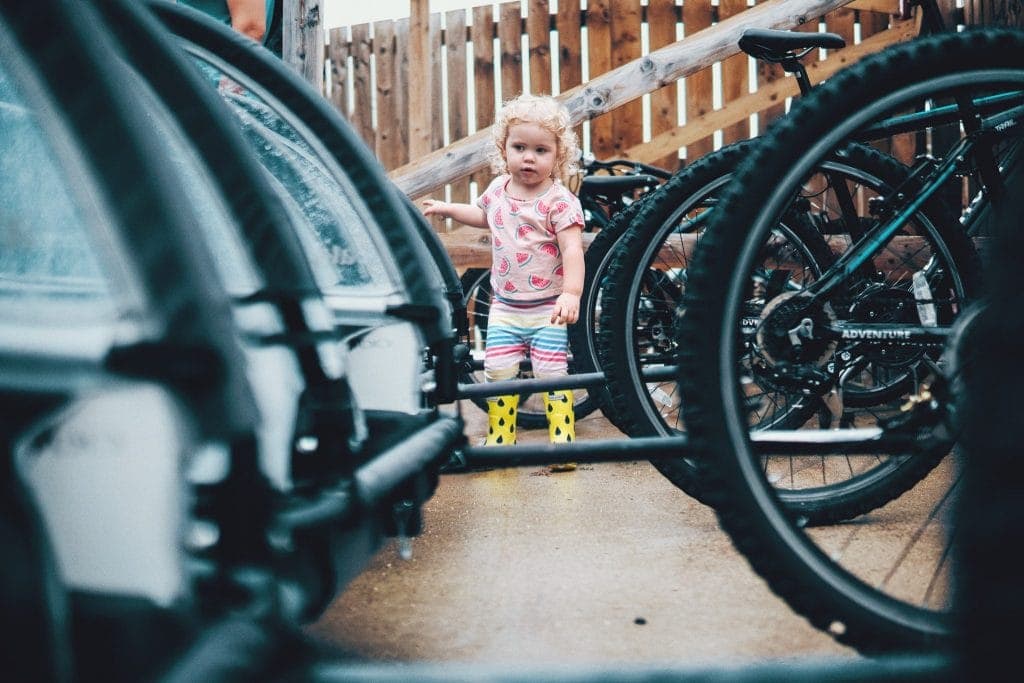 Nature Rockz ranger bug hunt (All ages – 60 mins) – This was a lot of fun and Elliot the ranger was absolutely brilliant. He was very passionate and gave each child lots of encouragement and one on one time. 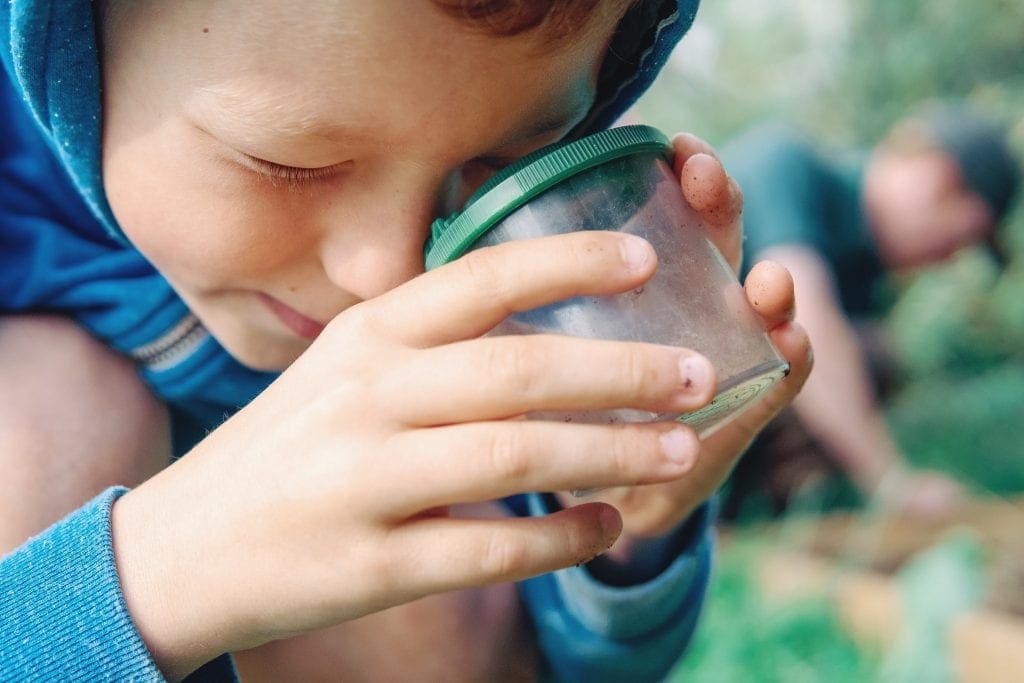 Pool Kayaking (7 and over – 45 mins) – Although this was in the pool it gave the kids the taste to take up kayaking after trying it out (which my eldest now wants to do). They were taught the basics and finished with a game of what can only be described as netball in kayaks which looked a lot of fun and the instructor was great with the kids – it was clear that he loved his job.

Water confidence (6 months – 4 years – 30 mins) – Only my 2 year old was eligible for this and it wasn’t really what we were expecting. It was in the baby part of the pool so the water was up to just below her waist and it consisted of her collecting toys that were bobbing about in the water.

We also spent a lot of time down at the beaches and coves. Depending on which part you went to, you had the choice of coves (which felt like you had your own private beach), sandy beaches, rock pools, caves, there was always somewhere new to explore. 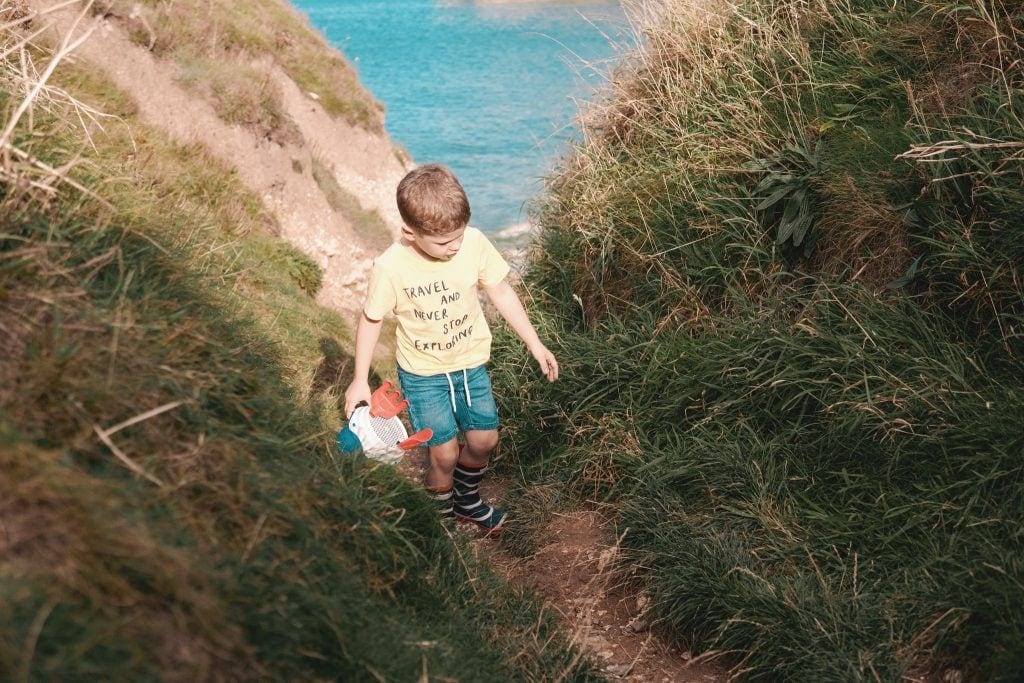 Given the time of year we went we had a mixture of warm sunny days and rain. On the warm sunny days you could be forgiven for thinking that you were somewhere in the Mediterranean when looking out to sea. 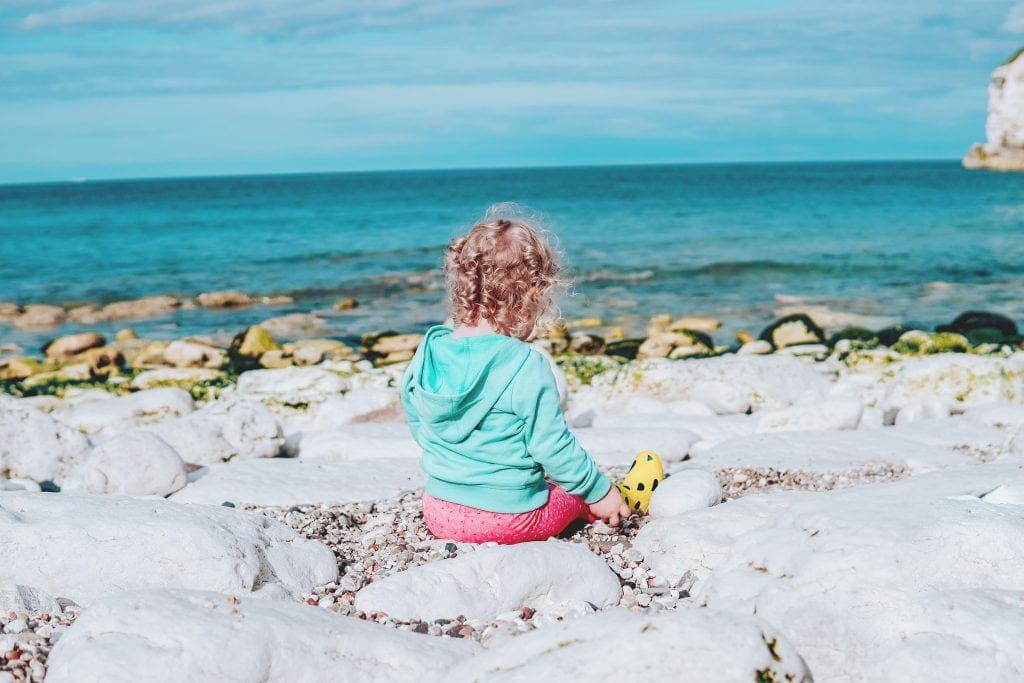 When it came to meal times we ate our breakfast and lunch in the caravan and chose to eat out most nights. This worked out quite cost effective as we had toast or cereal which we took with us for breakfast, got fresh bread for lunch from the on-site shop and on a couple of evenings we got dinner from the on-site shop (pizzas, ice-creams, beans, sausages, pasta).

On-site for evening meals you had the choice of either the Fish and Chip shop or the Lighthouse bar and restaurant.

The Fish and Chip shop features everything you would expect from your local chippy, but I felt it was quite over priced for what you got for your money.

The Lighthouse restaurant menu features a whole host of options for everyone. Curry, pizza, burgers, plus all of the kids favourites. It isn’t table service, so you have to choose your table, choose what you want and then go up to the counter to order.

Despite there being 3 servers taking orders at the till, the queue was always very long and when we got to the till we weren’t overly impressed with the service we received.

It might have been the end of our servers shift or something similar but we seemed to be an inconvenience trying to place our order.

We ordered 2 x kids pizzas, 1 x kids chicken strips and chips, 1 x adults Chicken Tikka Masala and 1 x Bacon Cheese Burger and chips. We also ordered 2 x Fruit Shoots and 2 x cokes and it came to £48.00 which I thought was quite expensive as this didn’t even include puddings. It was for this reason we chose to eat elsewhere most nights apart from when we ate in our accommodation.

I would highly however recommend the pizzas, they were made fresh on fresh dough and cooked in their very own pizza oven and the boys really enjoyed their pizzas which were of generous size.

The burger was served pink throughout, which if like me you prefer a brown burger, you aren’t given the choice. Although our meals were brought out by a waitress, no-one came back to see if the meals were ok, and with the queues to the tills being so long, it made it very difficult to complain. The other thing we found disappointing about the restaurant was that at 7.30pm as we were all eating, they turned the music up so loud that any conversations we were all having stopped as we couldn’t hear anything else.

I mention below in our top tips about finding hidden gems for places to eat. One of those places was a family friendly pub called Royal Oak Pub (http://www.royaloakhunmanby.co.uk) which was a 12 minute drive from Haven. It has soft play and outdoor play which my boys loved. Being from the South I am used to paying £60-£70 for a evening meal for all of us, here it came to £45 for mains, pudding and 2 lots of drinks for 5 of us. All delicious home cooked food and huge portions! 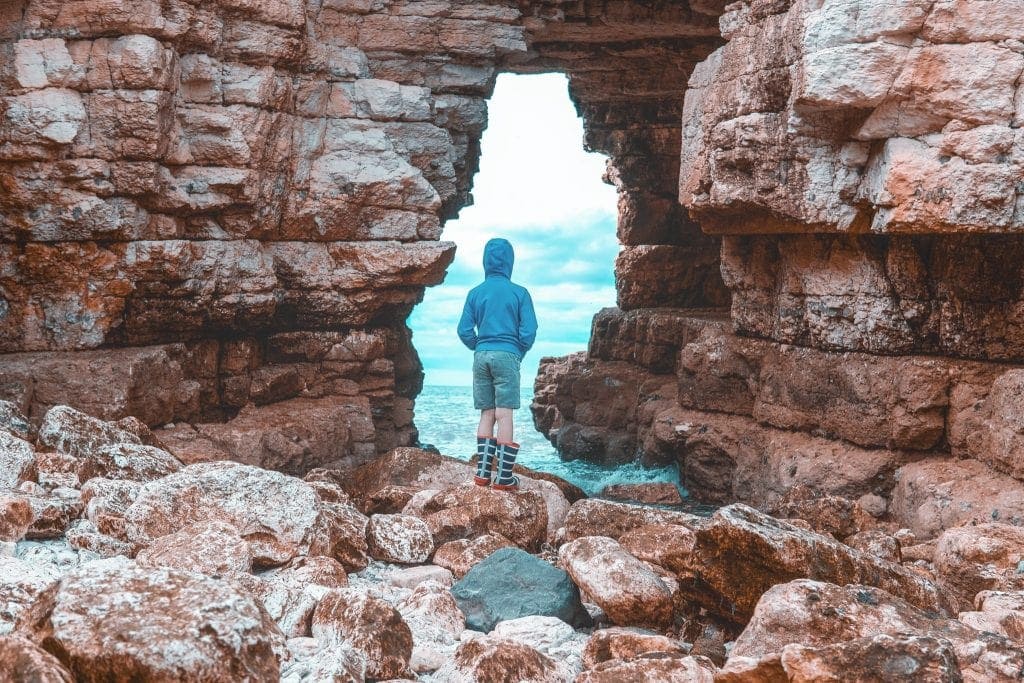 The other criticism about our whole experience staying at Haven was the smell of dog getting into our clothes. We don’t own pets so it’s something we instantly notice. The smell was very apparent on the sofa and carpeted area around it. We aren’t against pets staying in the caravans, but I think you should be offered the choice of whether to stay in a caravan that is pet friendly or not.

Our Top Tips for staying at Haven:

NB: Alex of What Alex Did and Hannah of What Hannah Did Next received a trip in order to review, but all views and opinions are their own

We've never tried a Haven holiday (or similar), though the long list of activities looks right up my girls' street.

I've not tried a Haven holiday yet, so this was a great read. Love the list of activities available for families but it sounds like there is room for improvement in some areas too.

We've looked at Haven holidays, so this review is useful. Sounds as though there's a lot to do there. Shame the restaurant wasn't all you hoped it would be, but it's great there are so many nice places to eat nearby.

It looks like a lovely place to visit and those views are just gorgeous, such lovely photos x

This looks a great place for a family holiday. You can't beat this type of holiday for freedom and fun :)