Planet Hollywood’s flagship store can be found in Disney Springs, Orlando. It has recently undergone a multi-million pound refurbishment and has been changed beyond recognition. The restaurant’s iconic globe has been transformed into a four-story stargazing observatory with new spaces including an outdoor terrace, a new menu and an exciting new feel. The restaurant is packed with movie memorabilia (you won’t know where to look next) and the main talking point is a 4,500 square foot video wall which features everything from movie trailers to karaoke, movie montages and more….. I would say that dining at Planet Hollywood in Orlando is like nothing you will have ever experienced before. We were recently invited down to see what they had to offer and were beyond impressed. 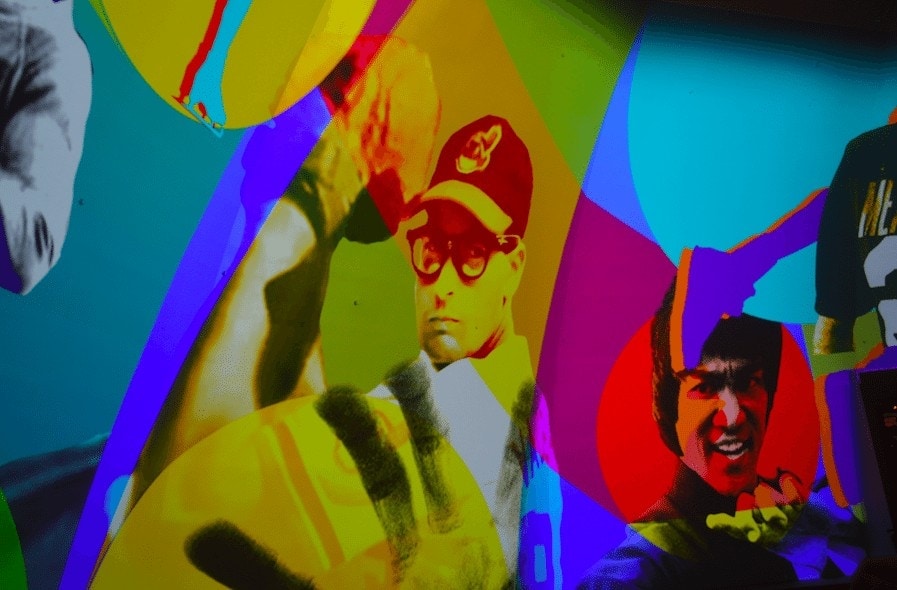 Our first impressions were that Planet Hollywood is certainly popular. We arrived for our 6pm reservation and the queue was out of the door. It was well managed though and we reached the front within 5 minutes. There’s plenty to look at whilst you’re queuing from Star Trek props and Superman costumes to the real Chewbacca! The reservations team are extremely slick and all communicate via headsets and before we knew it we were being whisked away to our table on the second floor.

As soon as I’m handed a menu, I normally dive straight in but this was so difficult to do at Planet Hollywood as there is just so much to look at and divert your attention. They played ALL of our favourite songs at Planet Hollywood and as Katy Perry appeared on the oversized screen in front of us we couldn’t help but all sing along to Roar! as the words were projected around us. The giant screen really is the focal point and it feels as if it’s actually the restaurant’s wallpaper it’s so big. It’s a bit of a surreal experience sitting in a restaurant and singing along with other diners but you soon lose your inhibitions and join in with the fun.

With our attentions diverted we could not decide what to order and called upon our friendly server for advice. He recommended the High Roller Platter which features a little bit of everything. It was perfect to share between a family and served on a stand that reminded me of a ferris wheel, another real talking point. But how was the food? I kind of expected it to play second fiddle to the atmosphere but this really isn’t the case. The chicken crunch and nachos were a real hit with the kids and I couldn’t get enough of the Texas Tostadas – Gyozo strips topped with BBQ chicken cheese, sour cream and BBQ sauce. OMG so addictive. The fried jumbo shrimp were nice and spicy and my husband loved the chicken wings. There’s a lot of food on the high roller but we finished the lot. 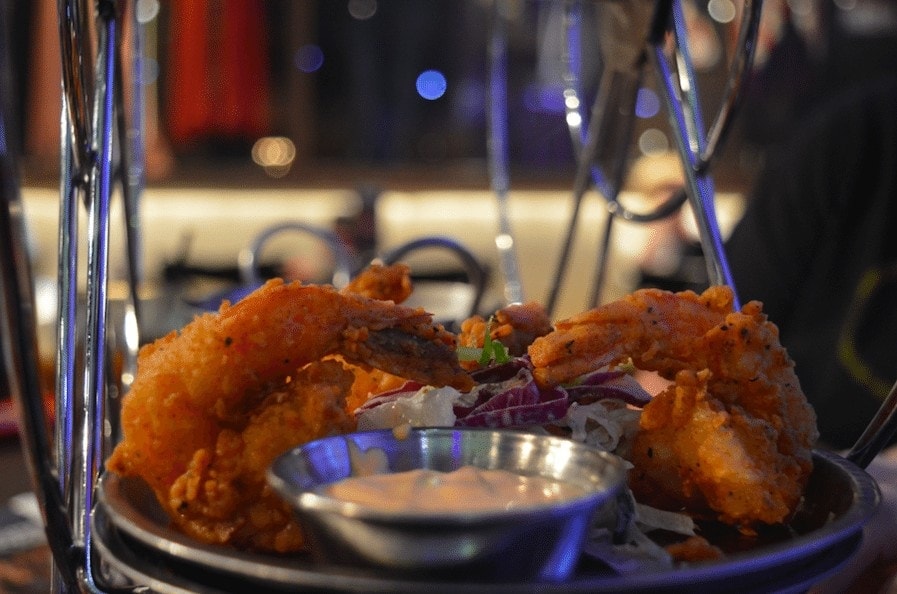 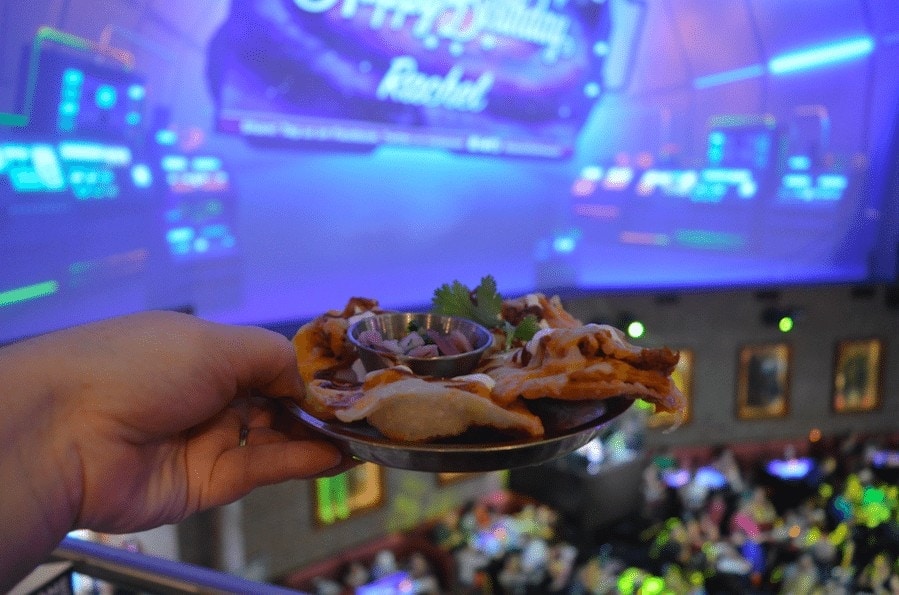 Between starters and mains we were entertained with sing-a-long Frozen, a James Bond montage, a few new movie trailers, a few clips from Grease and laughed as the cameras hit the crowd. We watched other diners enjoy the limelight and show of their dance moves on the big screen much to the delight of everyone in the restaurant who cheered along. The atmosphere is honestly so much fun.

Onto our mains and my husband went with the ‘Prime Time American Kobe’. At almost 20 USD I am pretty sure this is the most expensive burger he’s ever eaten. Packed with ground Kobe beef, smoked gouda cheese, donkey sauce and onion sauce, he states it’s a burger to try if you’re a burger fan and want to splash out on a treat. Served with triple fries the portion was huge – so much so that there was no room for dessert. 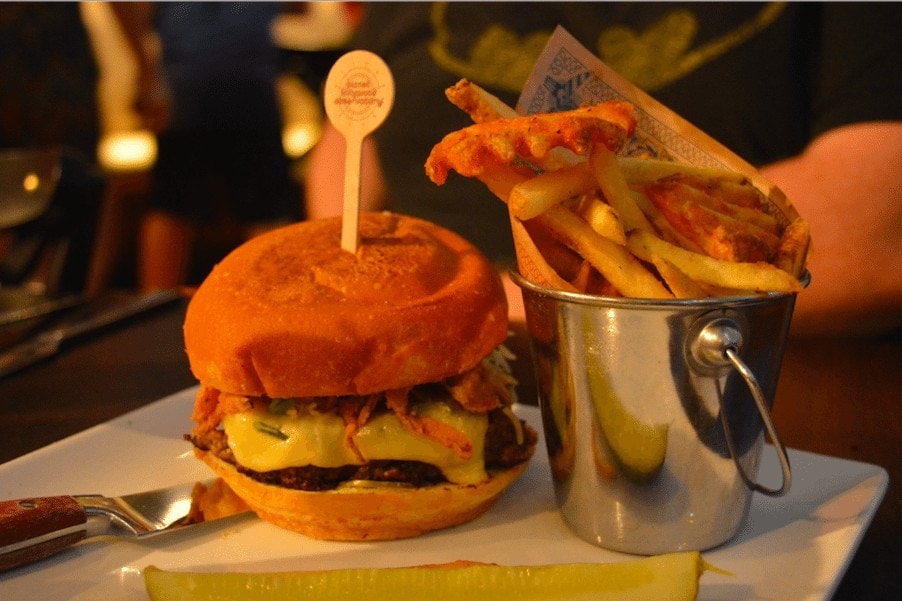 I ordered something that I just did not expect to find on a Planet Hollywood menu – slow roasted chicken. If you’re craving a roast dinner in Orlando, this one will definitely not disappoint. The chicken is slow cooked and beautifully tender. It’s served with lashings of pan gravy which is up there with the best gravy I’ve ever tasted. Garlic mash and perfectly cooked green beans accompany the dish and I really could not have asked for better. I’m only sad that it was such a big portion and I couldn’t eat it all! You definitely need to visit Planet Hollywood on an empty stomach.

Children’s meals are very reasonably priced at $9.99 for a main, drink and dessert. Kids are provided with an activity sheet too – alongside the big screen and the movie memorabilia that adorns the restaurant’s walls, there’s no chance of them getting bored. Planet Hollywood is a loud restaurant and definitely a place where you don’t have to worry about kids being kids and making a little noise.

Spaghetti and Meatballs are my eldest’s favourite and he was super happy to see them on the menu, the two youngest were happy with pizza. Due to our mammoth starter, after their main courses the kids were so full up that we decided to skip dessert despite it being included. Everyone really enjoyed their meal and we all agreed that our meal at Planet Hollywood was the best dining experience of our entire stay in Florida. 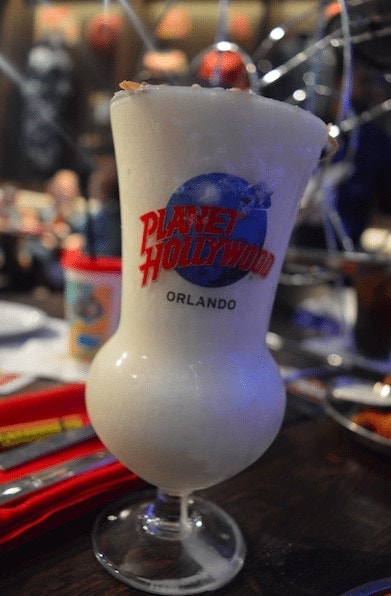 Kids drinks are served in cups that they can take away with you (which is similar to a lot of places in Orlando) and grown ups aren’t left out either. ‘Comet Glass’ cocktails are served with a souvenir glass for you to take home. For 16 USD I think this is a good price. A new glass is brought to your table all boxed up ready to take home so you don’t need to worry about washing your cocktail glass in the loos! haha! I went for the Cosmic Colada which tasted like a christmas version of my favourite drink – I loved it! I’ll try and recreate it at home in my new glass over the festive season I think.

As we left Planet Hollywood we couldn’t help pop into their store which is joined onto the restaurant and treated ourself to a couple of new Funko figures which we haven’t seen back in the UK. A perfect way to remember the most entertaining meal of our life.

Planet Hollywood is open daily from 11am – 12am. Reservations are highly recommended.