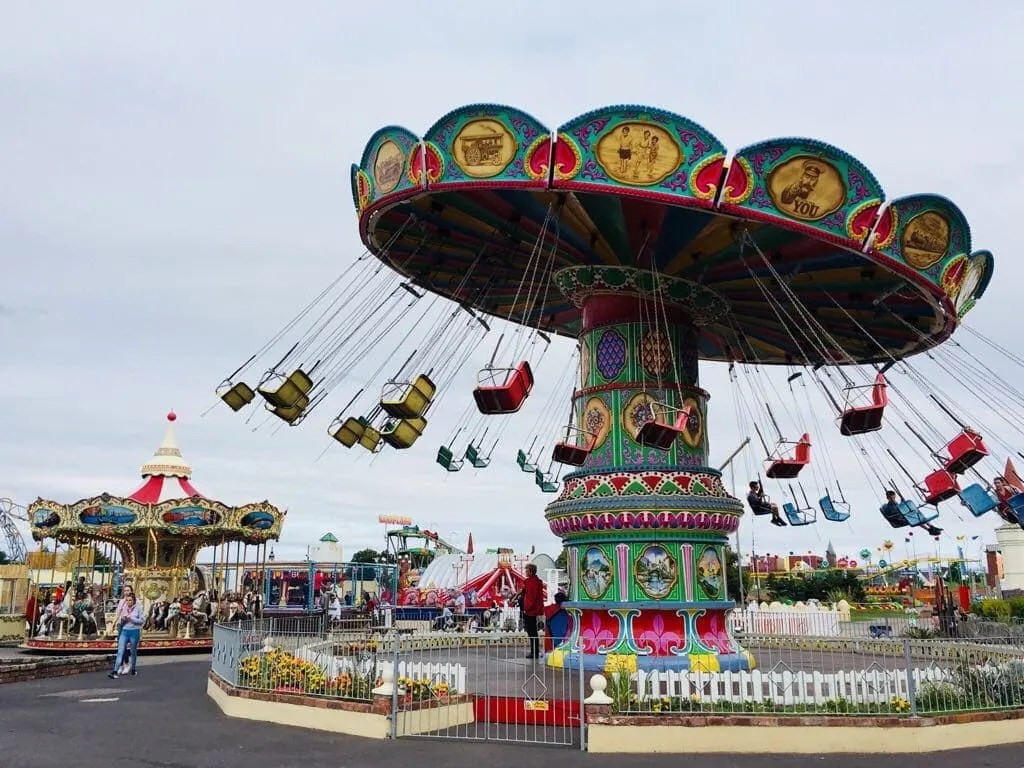 We are big fans of an English seaside resort, so were delighted to be invited to have a family holiday in Southport during the summer holidays, sampling some of the town’s numerous attractions.

NB: Jane and her family were hosted on their family holiday in Southport and invited to participate in the activities she describes, but all views are her own.

Our first stop on our family holiday in Southport was the The Atkinson (museum, art gallery and theatre), in the heart of the town centre.  The gallery is in a beautiful 19th century building and is open all day Monday to Saturday. The building also hosts a library, a café and a lovely shop.  I’ve learned by experience that it’s best to take a targeted approach to art galleries with children, and rather than trying to wander around the whole collection, to pick out a few highlights to focus on. There’s currently an excellent exhibition of Ancient Egypt at the Atkinson, and children and adults alike can’t fail to have their imaginations engaged trying to imagine what life was like 3,000 years ago. There was a very good little video shown on one wall of the gallery, showing the difference between life in ancient Egypt as a rich child and as a poor child.  There were an astonishing number of Egyptian artefacts, including an actual mummy, and lots of interesting information about aspects of Egyptian life such as rituals, toys, beauty and communication, written in a way that was interesting for adults and accessible for children.  We also enjoyed the exhibition dedicated to 10,000 years of the Sefton coast, which covered the coast’s history from prehistoric times to the present day, including the attempted blizting of Bootle, early aviation attempts and inventions (a Sefton-born man invented Meccanno apparently!!). 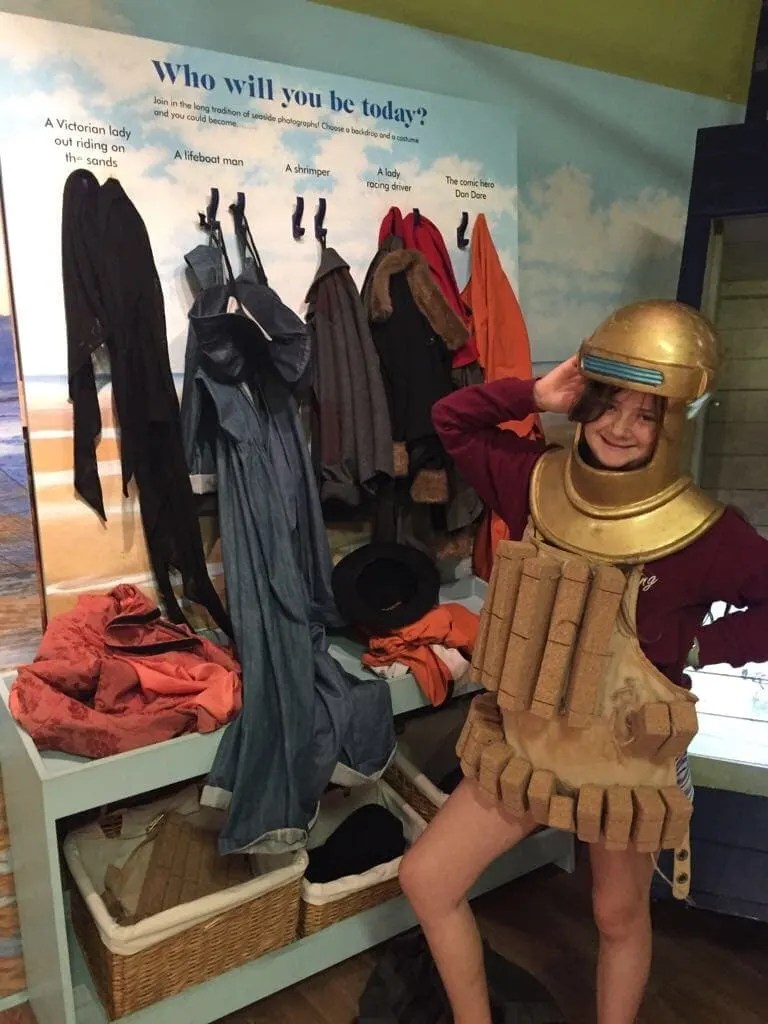 After a lot of dressing up as people from history, we had lunch at the gallery’s café, which was perfectly nice but very pricey (about £7 for a ham and cheese panini!), and then headed to Flavours ice cream parlour on Nevil Street for our pudding, where we chose from over 30 flavours of home-made ice cream.  Chrissy at Flavours told us how the ice cream is made on site, what the ingredients are (a lot of cream!) and how much ice cream they get through each day (bucketloads!).  I have to say, the ice cream was absolutely delicious – especially the Nutella (with big chunks of Nutella chocolate) and the mango and passionfruit.  I also loved the boozy cherry flavour (deliberately chosen so I didn’t have to share too much of it with the children) and the rum and raisin.  The portions were also huge, although we all managed to finish our two scoops, with the exception of Rosie who has never managed to finish an ice cream (making her very a very popular companion on holidays). 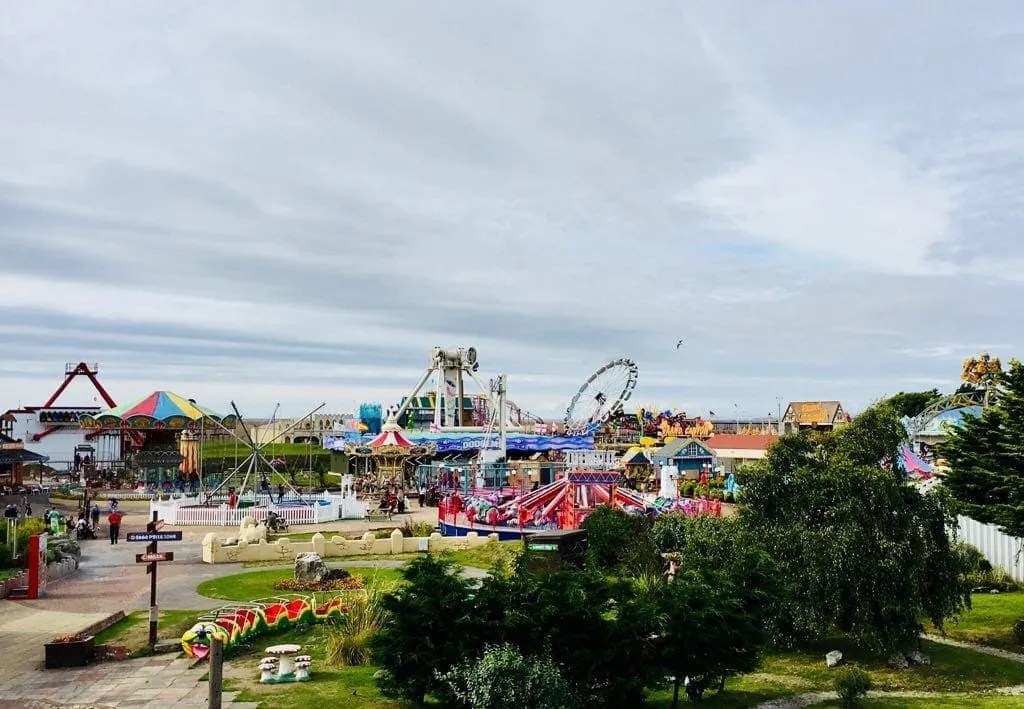 Our next stop during our family holiday in Southport was the Pleasureland theme park, only a ten minute walk from the centre of Southport through the lovely Kings Gardens (which is home to a fantastic children’s playground).  We all absolutely loved Pleasureland – it’s a really great mix of rides that are suitable for very small children, through to thrill-seeking teens and adults.  My children range between the cautious and the absolutely bonkers as far as rides are concerned, so it was perfect for us.  The incredibly fast waltzers were a favourite with everyone (except me, can’t go near the things these days), the dodgems were great fun and of course the log flume (although we were glad we’d saved that until last, as we got pretty wet!).

The ticketing system is slightly unusual in that you buy a number of tokens for £1 per token. The tokens are loaded onto a card which is then scanned at each ride.  Rides/attractions cost between 1 and 3 tokens (with most of the fast ones being 3).  There doesn’t seem to be an option to buy a day pass, which would certainly make it more economical if you wanted to spend a whole day there going on ride after ride – although I guess the token system is good for people who drop in and go on 1 or 2 rides or for families of very young children whose rides will cost fewer tokens.  If you buy the tokens online before you go, you can make savings compared with buying them on the day though.

It’s not a huge theme park when you compare it to somewhere like Blackpool Pleasure Beach, and you could walk from one end to the other in a couple of minutes.  They do pack the rides in though, and we spent a good two and half hours (and could have spent longer but it closed) going on all the rides and had a whale of a time.

When the park closed at 6pm, we decided to check into our hotel, the 4 star Ramada Plaza on the Waterfront complex up at the opposite end of Southport.  The hotel staff were very friendly and professional – and they had been very accommodating when we had left our bags earlier in the day and parked under the hotel in its private car park.  We were given a room on the 4th floor with an amazing view of the marine lake and 2 huge king-sized beds for the 4 of us.  The kids were very excited by the tea-making facilities, biscuits and giant TV screen and I had to tear them away so we wouldn’t be late for our booking at Roberto’s Italian restaurant at Ocean Plaza. 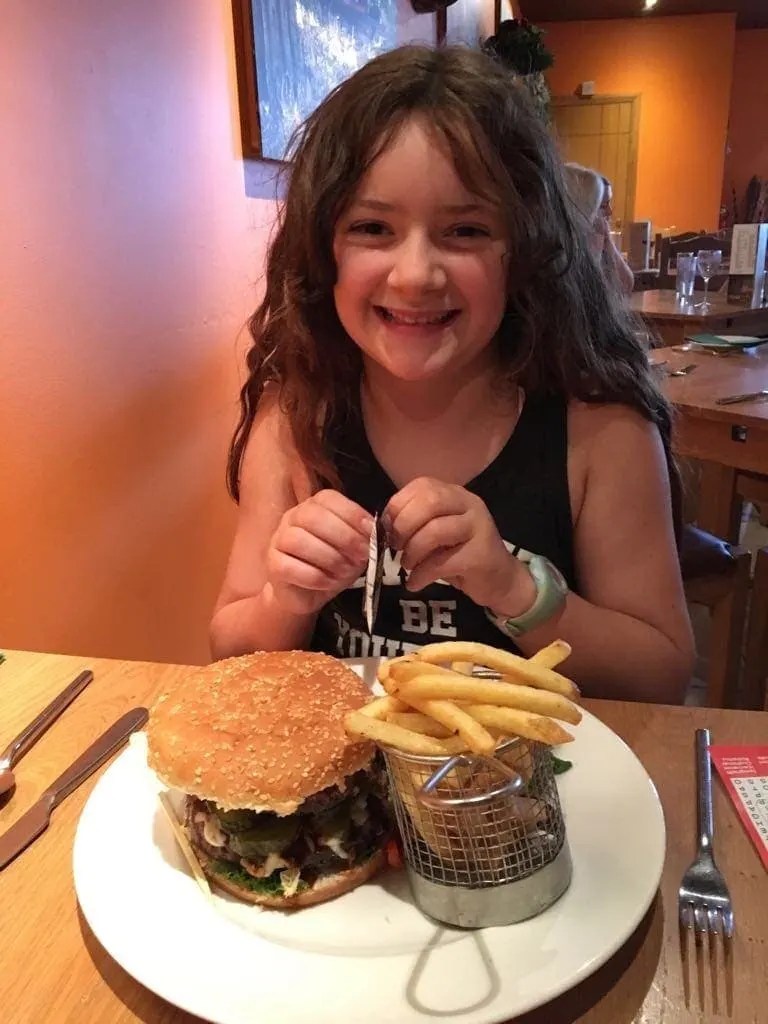 Ocean Plaza is a retail park which is also home to bowling, a cinema and laser quest.  The majority of the eateries there are chains, but Roberto’s is an independent restaurant that has apparently been in the same spot for 10 years.  Kids eat free at Roberto’s all day on Sunday, and daily between 5 and 7pm.  We were met by very friendly service and the restaurant, although large, managed to retain a nice intimate feel.  The food was good – Charlie ordered his usual of a Hawaiian pizza, which went into his top 3, Rosie had a delicious home-made lasagne (the child’s portion was very generous, so I ‘helped’) and Mimi had a giant burger (which, sadly, she managed to finish, although I did get a gherkin).  My crispy duck pizza was a little disappointing (the duck wasn’t crispy and the hoisin sauce made the base quite soggy).  The desserts were nice, and weren’t too big either which I quite like, as I’ll always finish what’s on my plate, even if I’m full half way through.

The Ramada was a very comfortable night’s sleep and the kids couldn’t wait to get to down to breakfast – definitely the best part of staying in a hotel.  Breakfast was a bit of chaotic affair – it wasn’t hugely busy when we went down at 9am, but tables hadn’t been cleared and we had to ask for things like milk, bread and crockery to be replenished when the staff hadn’t noticed themselves.  Our server seemed quite baffled when I asked for hot chocolates for the kids, and two of them arrived cold (not even lukewarm).  While the staff weren’t rude at all, they didn’t seem to have had any customer service training, and it all felt a bit Fawlty Towers.  The kids didn’t notice though, and they each had 4 courses and loved the experience.  Charlie set fire to the toast machine by trying to warm up a pain au chocolat in it, but they seemed to be used to this as they just advised us to let it burn and then it would drop out the bottom, which it did without burning the hotel down. 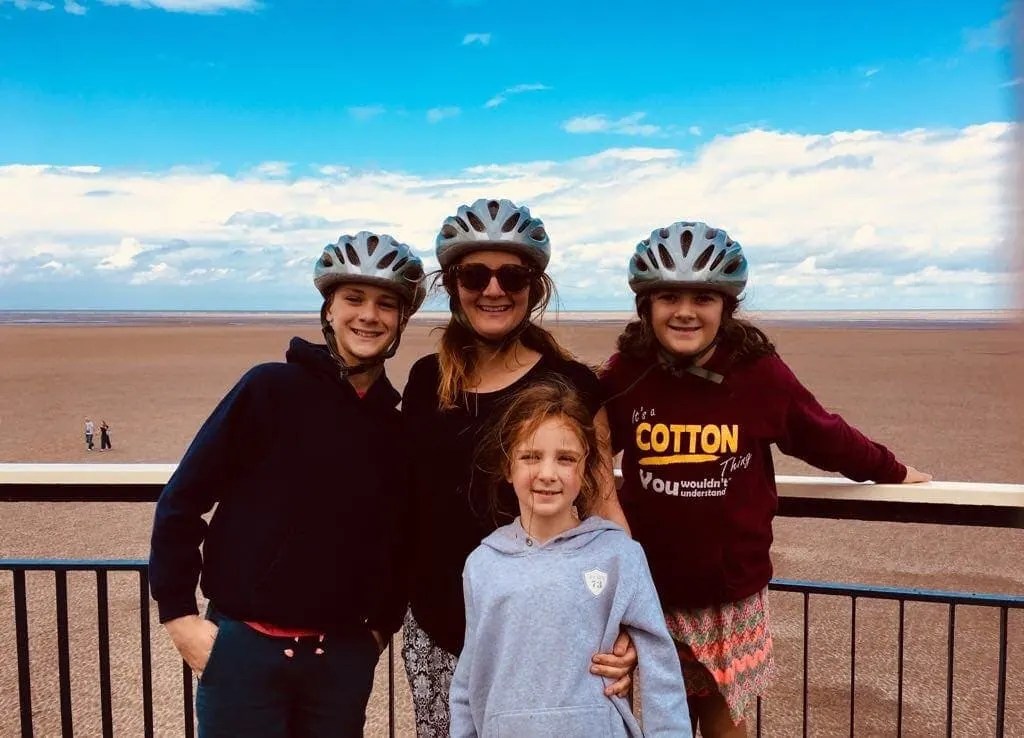 After breakfast, we went to hire bikes at the Eco Centre, next to Pleasureland.  It’s very good value to hire bikes there and the guy that runs it is very friendly, with plenty of local information and route maps.  There were only 2 bikes that would have been suitable for my 10 and 11 year olds, and only 2 that would fit my 8 year old, so it’s probably a good idea to call before you go to check that they can actually accommodate all of your party.  We cycled down the coastal path towards Formby – if we’d gone all the way, it would probably have taken about 50 minutes.  We decided not to go all the way, so headed back to Southport and cycled the other way along the promenade, with a good view of Blackpool Tower and the Big One, and then all the way up Southport Pier (much better than walking up it – it’s actually a really long way!).  There were other routes we could have done that were either off-road, or mainly off-road, so ideal for families.  I wouldn’t have taken my children on the roads, especially the coastal road up to Formby, if there weren’t separate cycle paths as it’s very busy and cars absolutely whizz up it. 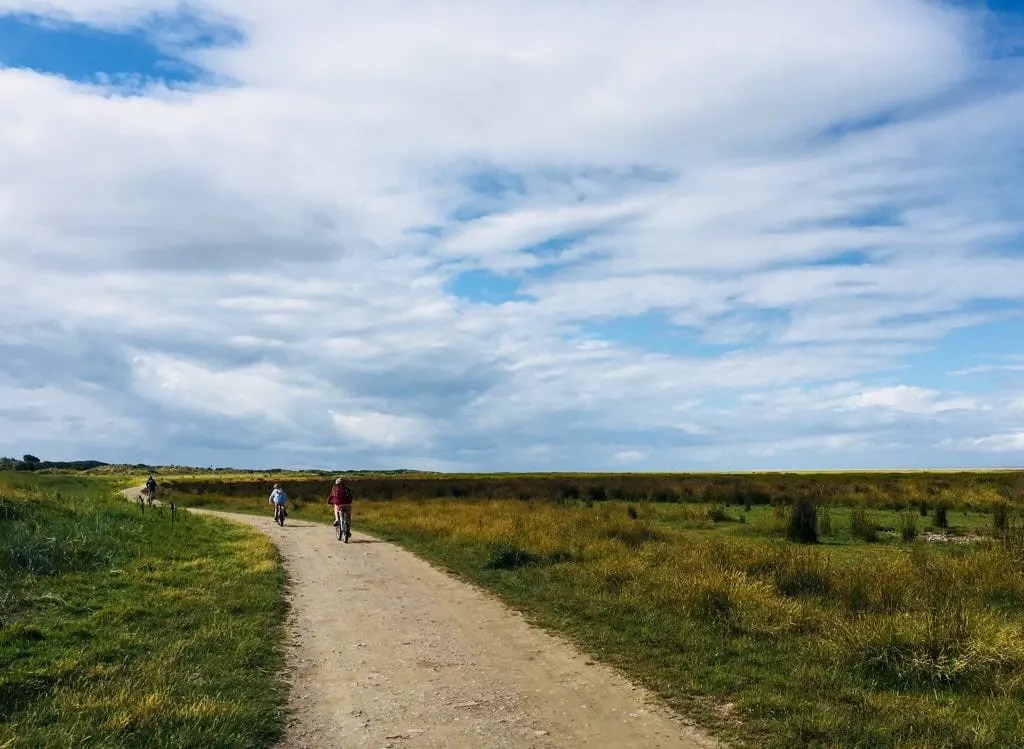 Our last stop of the trip was the Model Railway Village in Kings Gardens.  There is a miniature railway in the gardens that you can pay £3 to ride on, so I’d assumed the two were one and the same, but not so!  We were so glad we went to the Model Railway Village – it was definitely a highlight of our trip.  It’s a relatively small area – you could walk around it in 5 minutes if you wanted to – but we spent a good hour in there having a properly good look at the intricate details of the village and the trains.  There was also a quiz to do – questions like ‘What kind of animals are crossing the bridge near the church?’ – which is a great way of slowing you down and getting you to look closely at the village. 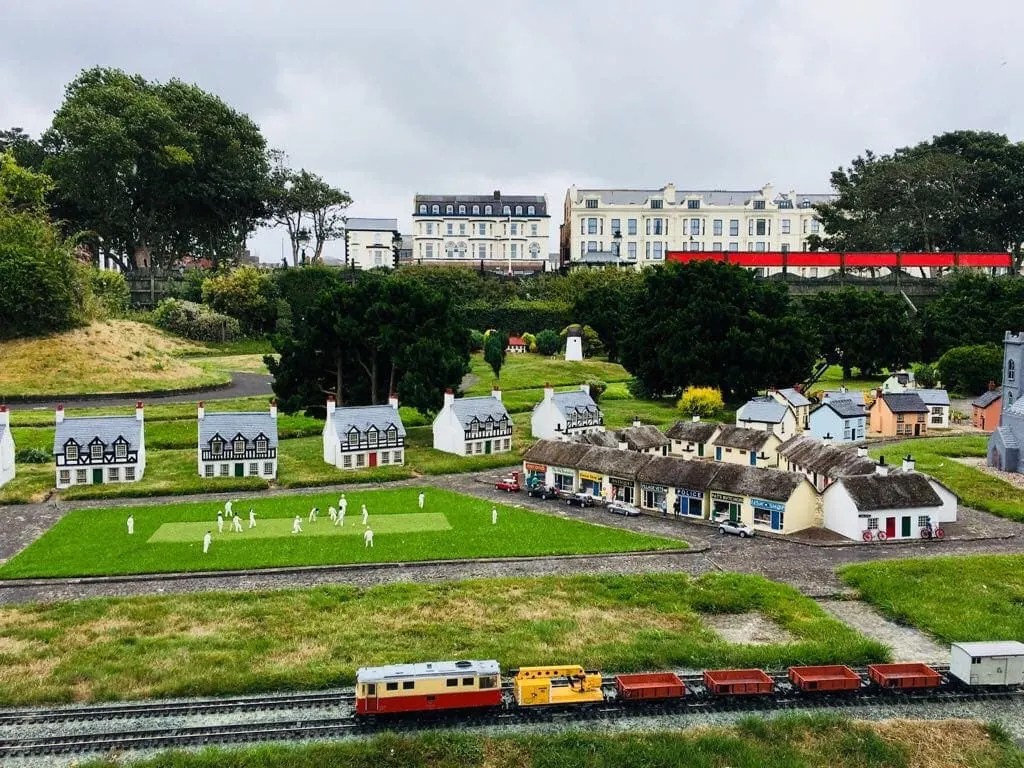 As well as miniature houses, there was a canal with painted long boats, a church with a wedding scene outside it, a village green with a game of cricket underway, various shops and businesses and of course the trains and stations.  We were delighted to see that the signal boxes went from green to red, and that the trains stopped on red!!  The owner, Raymond, spent a long time with Charlie and me explaining how the train system worked on 3 separate circuits, and how they knew to stop when the lights were on red and go on green.  His passion for the village was infectious and it’s the most animated I’ve seen my son (other than when playing Fortnite) for weeks!!  Raymond’s wife, who runs the village with him, offered to look after our bikes while we visited the village and even gave us a towel to dry off the seats after a rain shower!!  If we hadn’t been invited to visit the Model Railway Village, we’d have missed out on this magical little place, as you can’t see it at all from the gardens or the playground, hidden as it is behind a high hedge.  Raymond told us that it’s been the number 1 Southport visitor attraction for the last 5 years, and we could definitely see why.  Don’t miss this place if you go to Southport!! 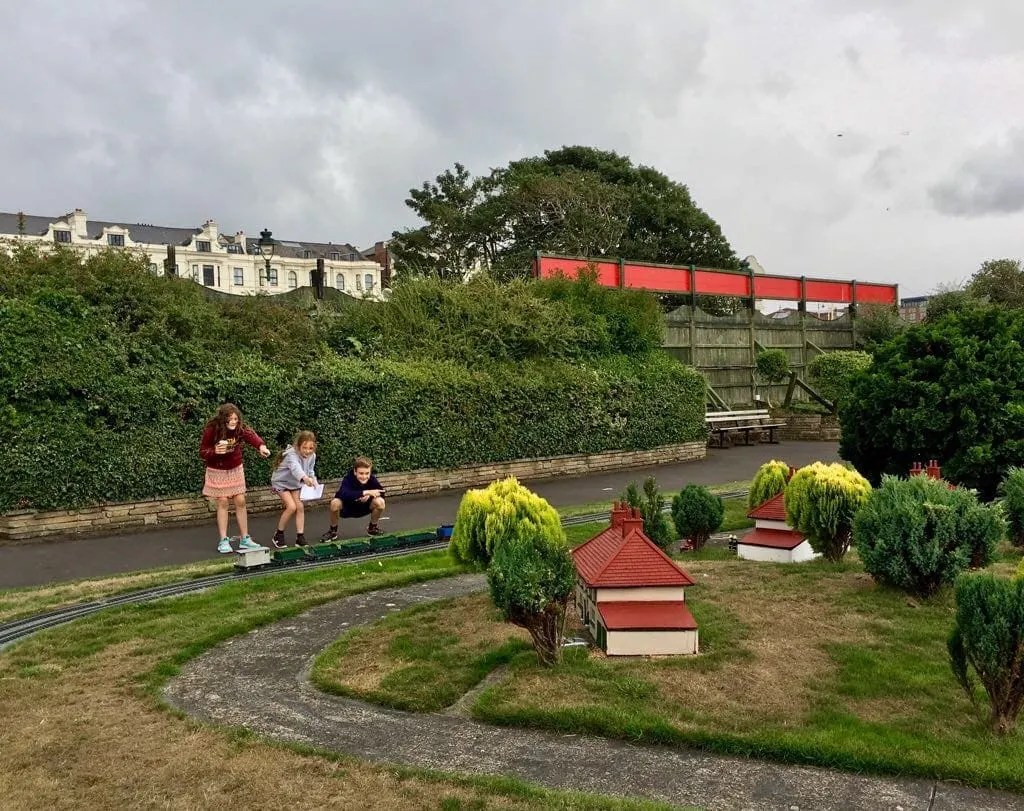 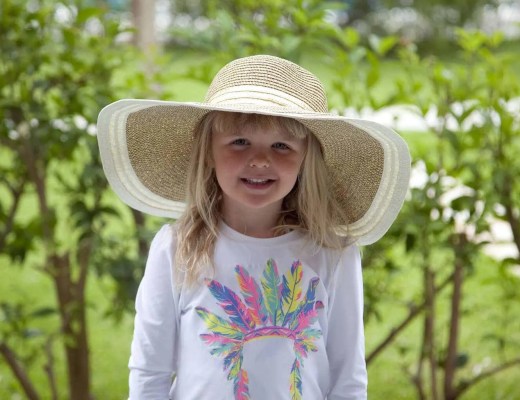 School Fines for Term-Time Holidays Decision – What Does it Mean? 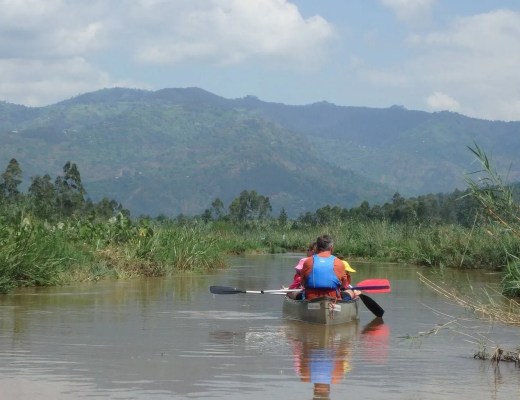 Canoeing in Rwanda on the Mukungwa River with Kids

Ideas for anyone self-isolating or home schooling their children!