That year my mother-in-law and I took a boat along the Thames to the show. We enjoyed a civilised day of lunching and strolling around the show gardens. I have wondered about revisiting every year since, but having young three daughters, I thought it would be something I would have to put on hold for a while. That was until a friend mentioned that she had taken her children recently and they really enjoyed it. So with the July-sun shining, my two year old and I cycled over to the Flower Show whilst her big sisters were at school. We were on a mission to see if a Flower Show really could be child friendly. 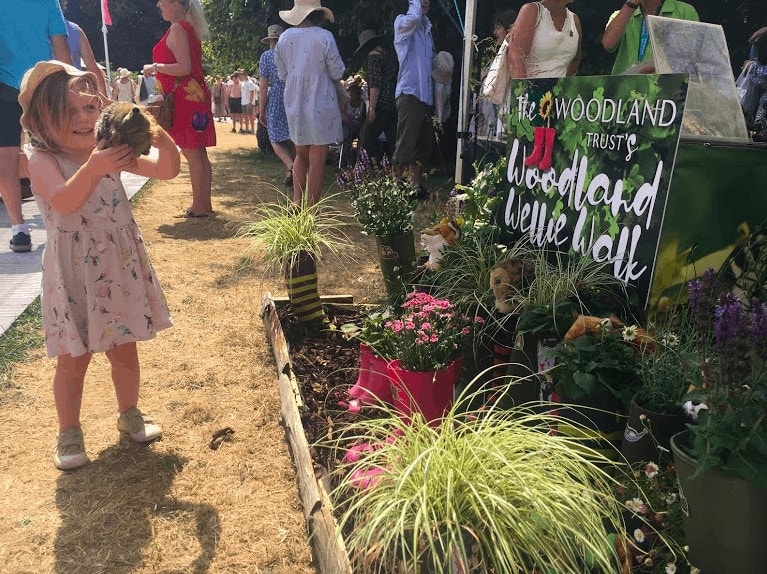 As suspected, we were notably younger than the majority of crowd, but felt very welcome. The Flower Show covers a huge area of Hampton Court Palace’s beautiful gardens, collecting around the Long Water pond in Home Park. It was quite a lot of walking for a two year old, but we found the staff helped us locate the bits of the show that would most interest both of us, including the evolution garden, scarecrow competition, bean planting and fossil digging.

We enjoyed a spot of window shopping, in particular the children’s garden toy company, where Nancy marvelled at the trampoline, and then tried out a hammock made from parachute material. We stumbled upon the Skinny Jeans Gardener, who helped my two year odd plant a bean in a paper cup then we walked through our first show garden. My daughter was keen to move through the gardens faster than most, but  on the other side we found a stand where she was very happy to spend ages digging through amber and peering through a magnifying glass to try and find fossilised insects. The archaeologist confirmed her findings and she was delighted to take home her fossilised mosquito to show her sisters. 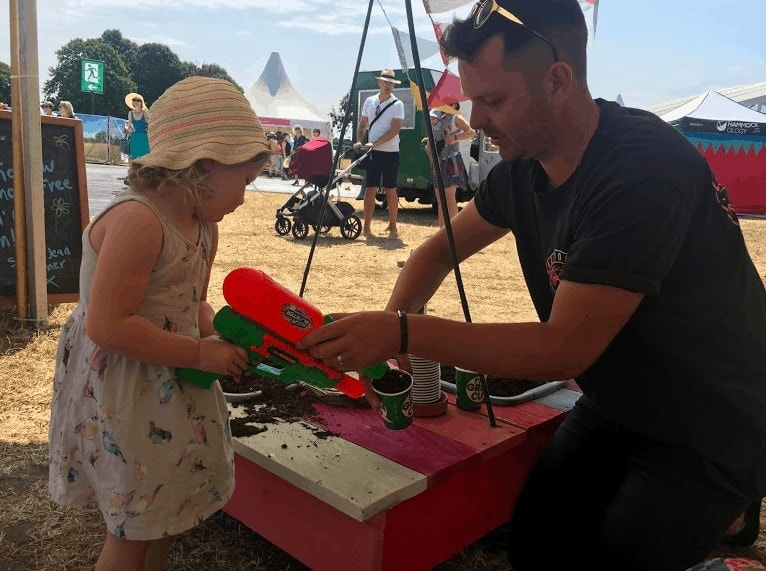 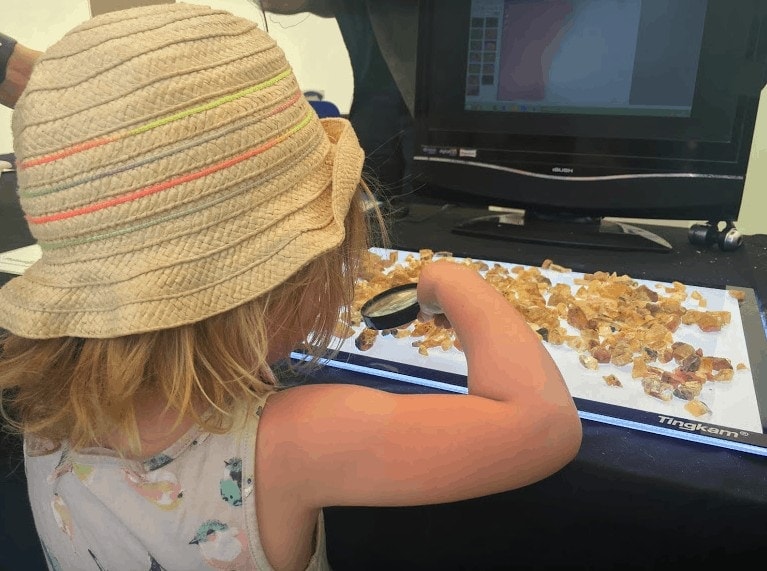 After a picnic lunch from one of the many food outlets, we enjoyed an ice cream whilst admiring the scarecrows designed and constructed by school children. Our particular favourite was a very intricate Peter Rabbit scarecrow. A small soft play area by a visiting nanny company provided some welcome shade. 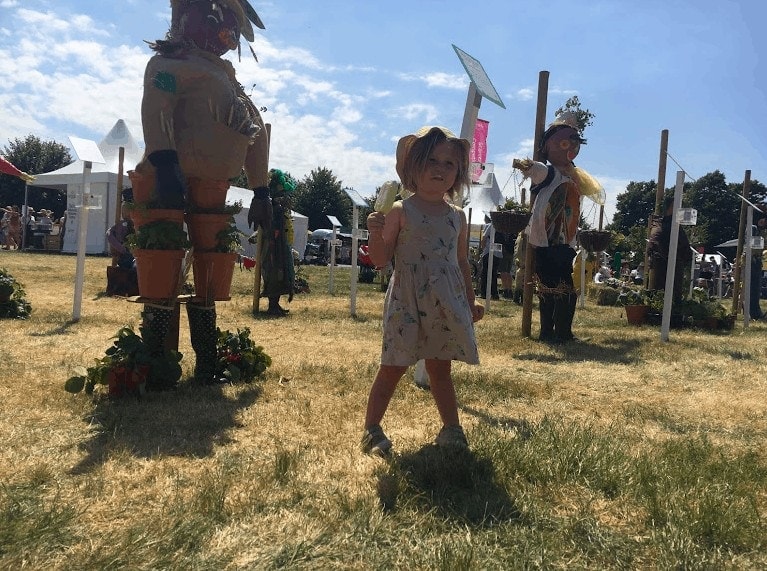 We continued our walk around the show gardens and my two year old decided which gardens she would give a gold medal to. Her favourite was a Mr Men themed garden, in support of children living with cancer. It was designed to stimulate children’s senses and it worked for my daughter  who spent a long time playing with the water and lights. Best of Both Worlds Garden impressed us both with its beautiful planting. A Very Modern Problem summed up our day perfectly, as we headed home to our own garden, full of large plastic toys. This garden illustrated the reality of most family gardens set against the perfectly manicured gardens found at the show, as a portrayal of the conflicting feelings of inspiration and inadequacy that social media can illicit. 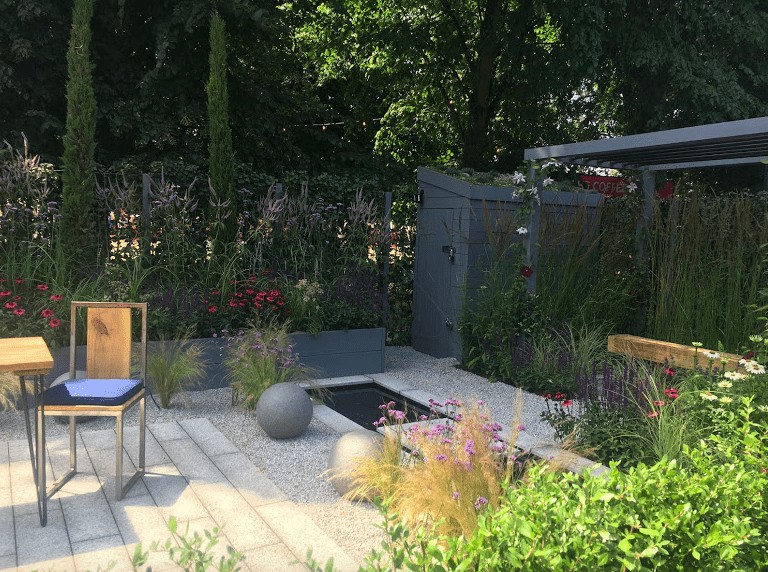 We both really enjoyed our day at Hampton Court Flower Show. My two year old was one of very few children there, but that would be expected during school term time. I wouldn’t go solely for your children. However, if you want to go, I highly recommend not waiting any longer and taking the children with you. There is plenty to keep children happy & entertained, and if all else fails, there is ice cream. 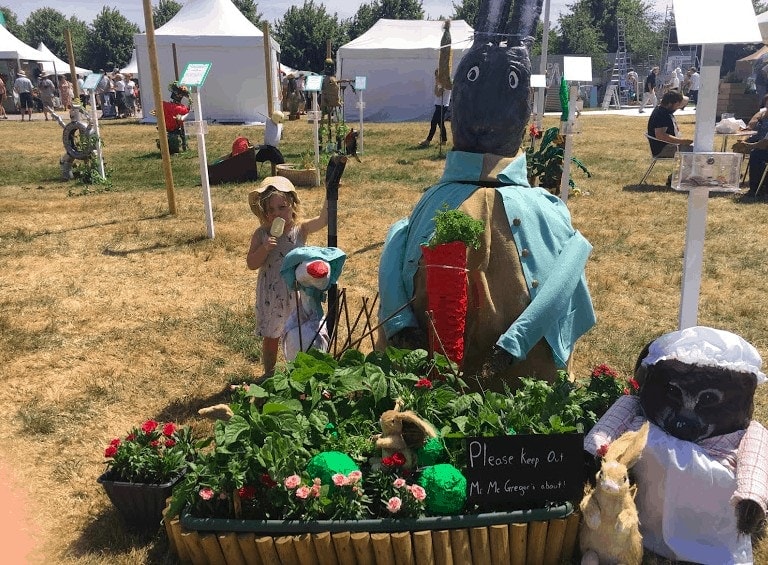 Lucy received a complimentary press pass to Hampton Court Palace Flower Show but all her opinions are her own.