With Berlin’s history being as it is many of the tour companies I contacted actually said that their tours of Berlin started at age 14. They had either tried them for kids younger than 14 and stopped running them or decided that the subject matter wasn’t really appropriate.

So I was thrilled when I came across Tours by Locals and they had family friendly tours of Berlin available.

You can use the search function on Tours by Locals to hone down by city, then by dates and then you can add your interests too.

I was delighted when I used this to find that there were a number of options available to me. Albeit the couple of tours designed specifically for children in Berlin which Tours by Locals do (including crayons and maps and balloons) were actually already booked.

I say this because Martin, apologies Martin, wouldn’t have been my first choice of guide for a family friendly tour of Berlin. That’s not because I didn’t think he would be any good, not at all, his reviews were exceptional, simply that children weren’t his focus.

Martin soon put my concerns at ease though as I discussed the contents of our private family friendly tour of Berlin with him and we adapted the tour to suit subject matter and interest to children i.e. we added famous chocolate shops and Checkpoint Charlie and we discussed timings and how to get around.

Our tour ended up being of State Opera, Checkpoint Charlie, Brandenburg Gate, and remnants of The Wall plus Gendarmenmarkt (Fassbender&Rausch, the famous chocolaterie is nearby) and Museum Island. I had already informed Martin that we had tickets to see The German Parliament–The Reichstag dome the next day so we did not need to include this.  Our private family friendly tour of Berlin was due to take 3 hours.

We arrived into Berlin from our previous 48 hours in Hamburg with kids, so we merely had time to drop our bags at the hotel, and grab a quick bite to eat before meeting Martin at the arranged meeting place at Gendarmenmarkt, in front of the Konzerthaus. The neo-classical Konzerthaus hall is Berlin’s most attractive venue for top-flight classical music. Right at the heart of the stunning Gendarmenmarkt square, you can enjoy an unforgettable classical concert experience, however that’s not what we were there to do. 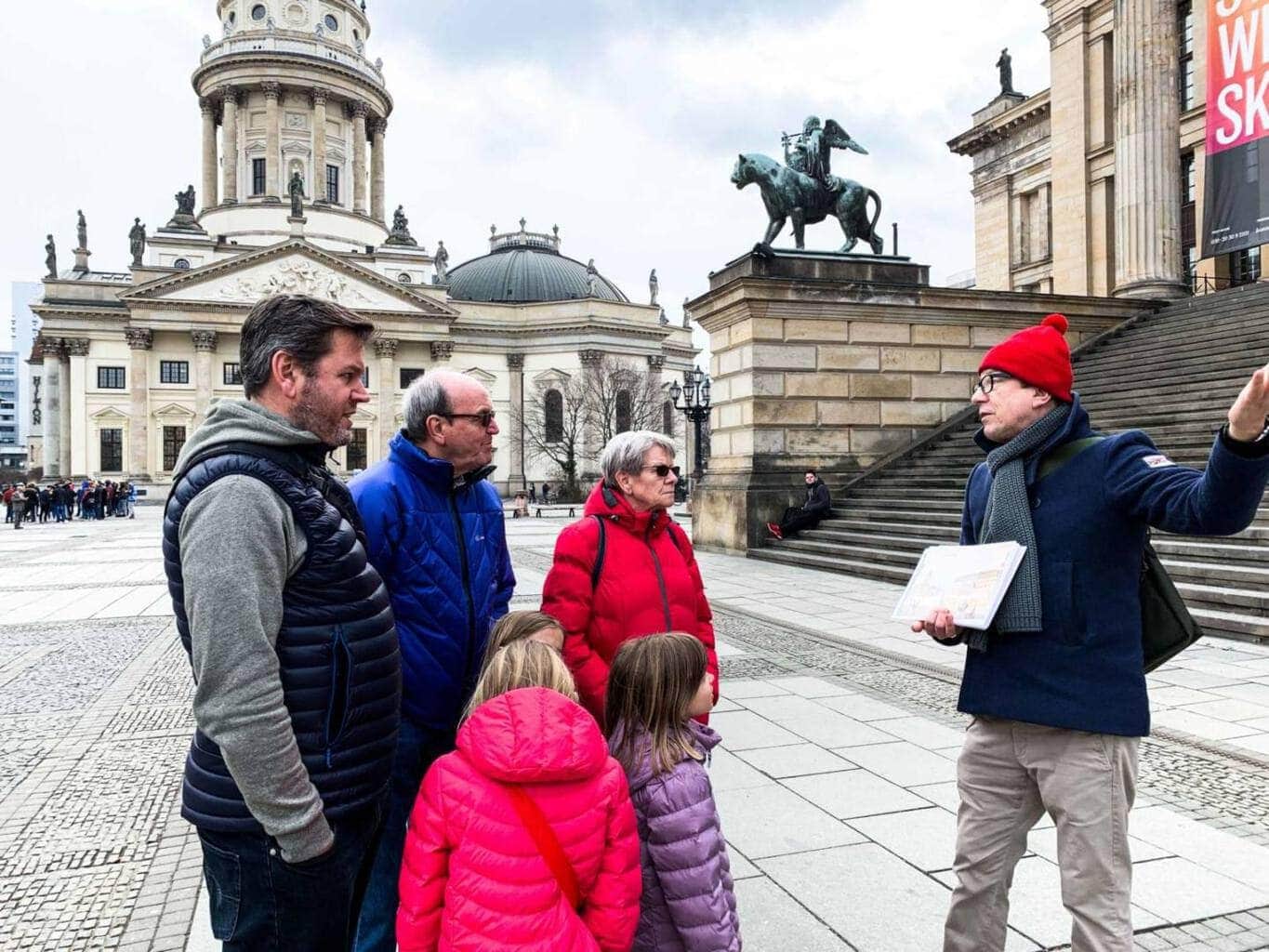 We were there to meet Martin, our Tours by Locals guide. Martin was easy to spot in his bright red bobble hat and immediately put all of us at ease, including the children.  Martin had with him so photos and prompts to explain to us some of his key stories and it was clear that he had a wealth of knowledge about his city.

After the initial ‘set the scenes’ part of the tour in Gendarmenmarkt  we made our way to the two chocolate shops. The kids favourite part. On reflection we could have perhaps done with these at the end of the tour, or even in the middle to give them a little boost half way round, or something to aim for at the end.

The two chocolate shops couldn’t have been more different, one old fashioned and seemingly more expensive, the other much more modern and colourful. Both enticing, both interesting to see. I preferred the old fashioned one with actual chocolate models of key Berlin monuments. 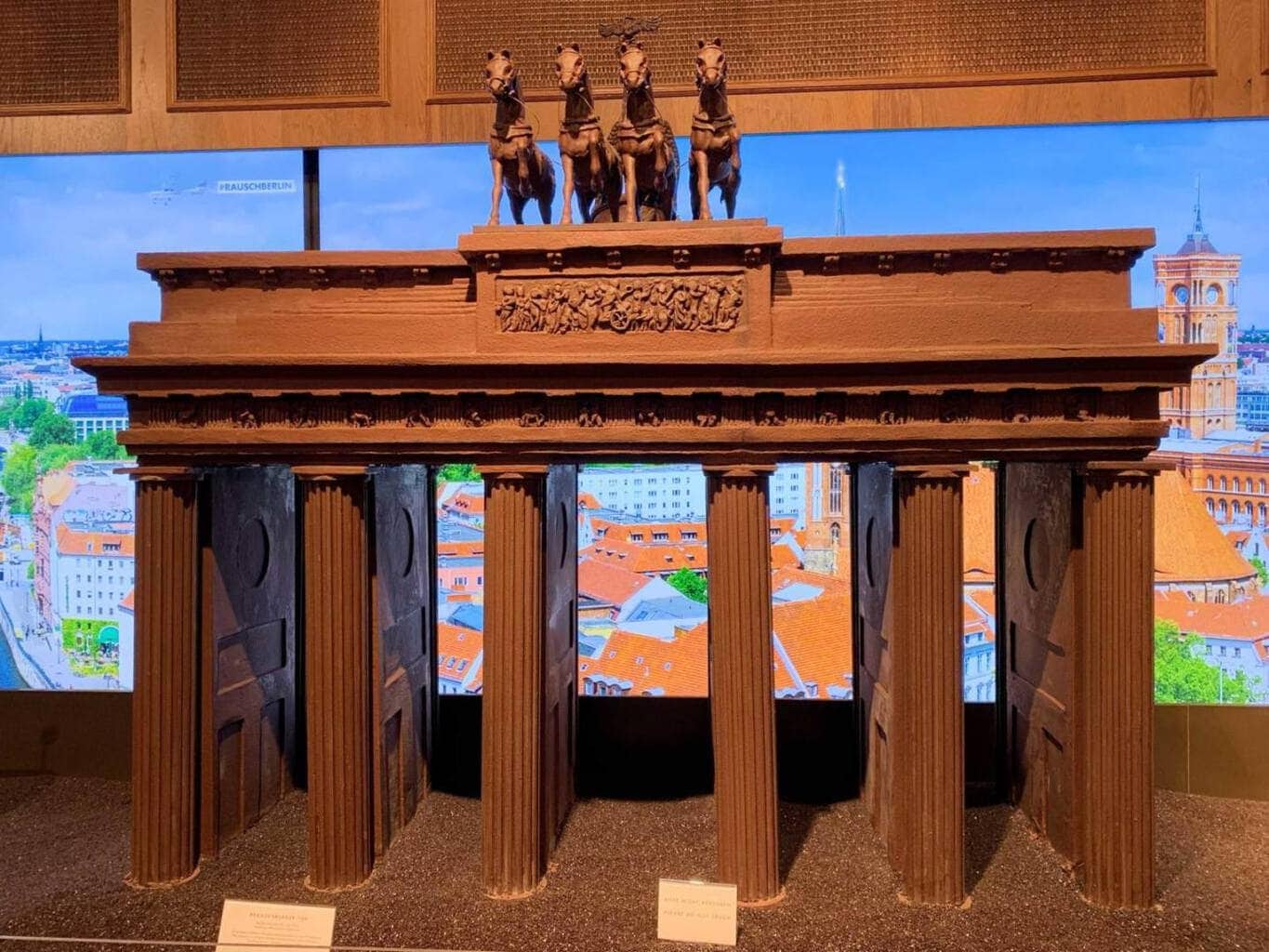 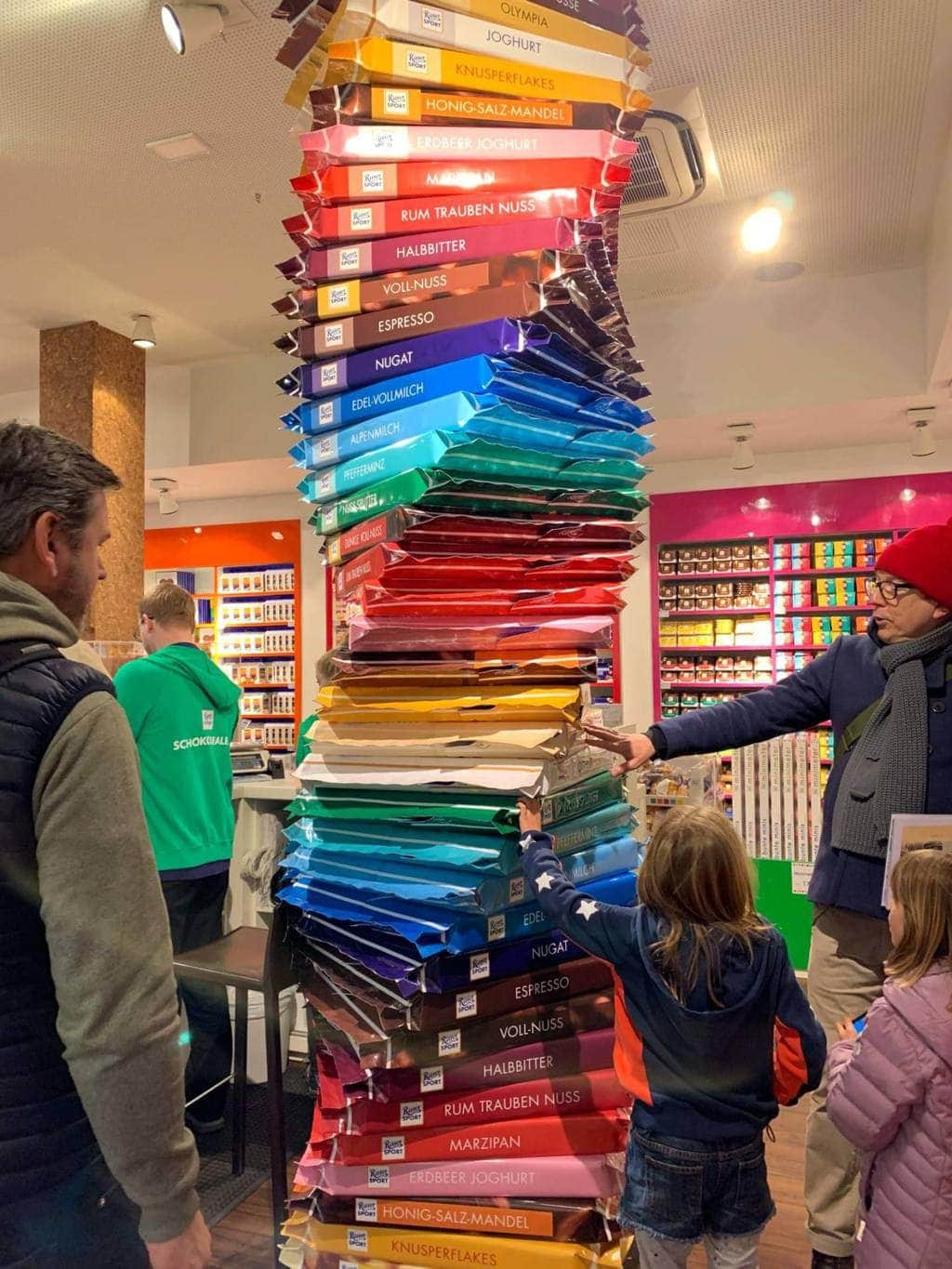 After visiting the chocolate shops we made our way to Museum Island.  Museum Island is so called because of the complex of internationally significant museums, all part of the Berlin State Museums, that occupy the island’s northern part.

The five museums on Museum Island are: 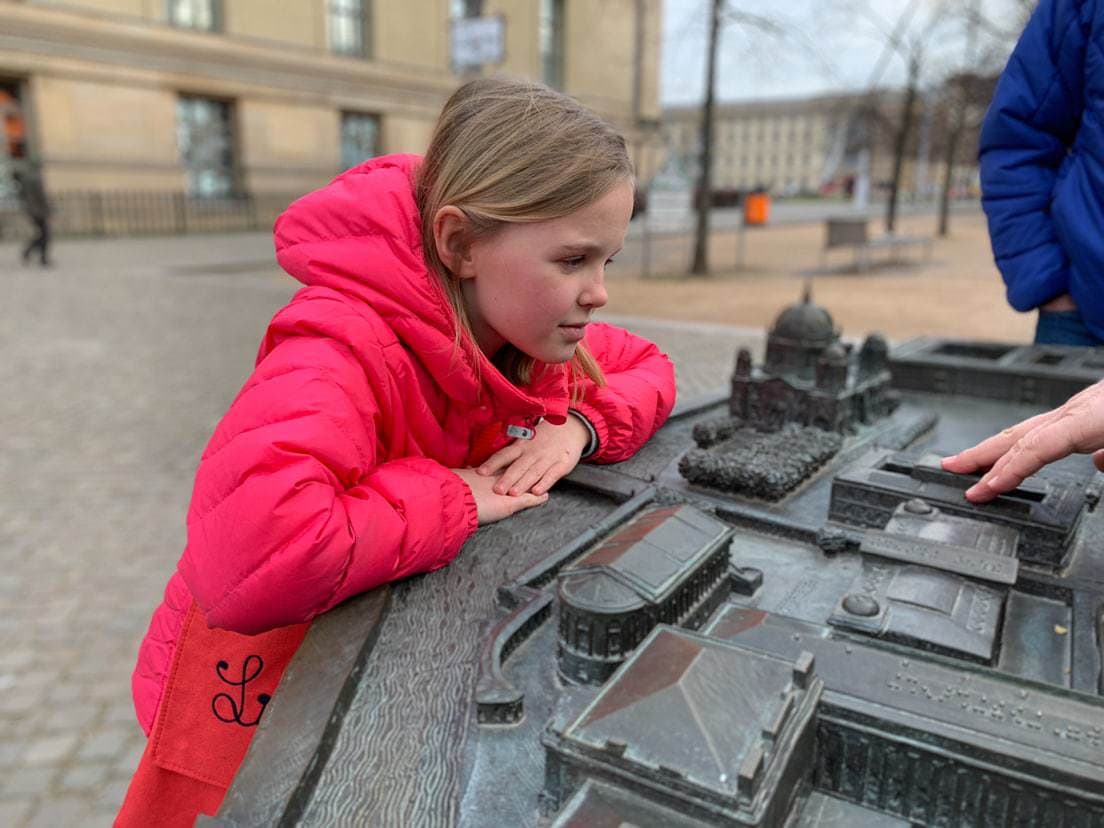 On our way to Museum Island we made a stop along at an unassuming building along the road. This is what I love about taking a family friendly tour in a city because you find these gems that you wouldn’t have found on your own.

The Pierre Boulez concert hall was designed upon the initiative of Daniel Barenboim, General Music Director of the Berlin State Opera, and in collaboration with the American architect Frank Gehry.  Barenboim’s orchestra of Israeli and Arab musicians plays in this intimate concert hall and whilst the orchestra began as an experiment, a musical bridge across pressing cultural and political divides it has been transformed into so much more. We only touched on the history wrapped up in these walls but without the tour it was a subject I’d have known nothing about. If you want to read more there are many articles on the subject but I enjoyed this piece in the Los Angeles Times. 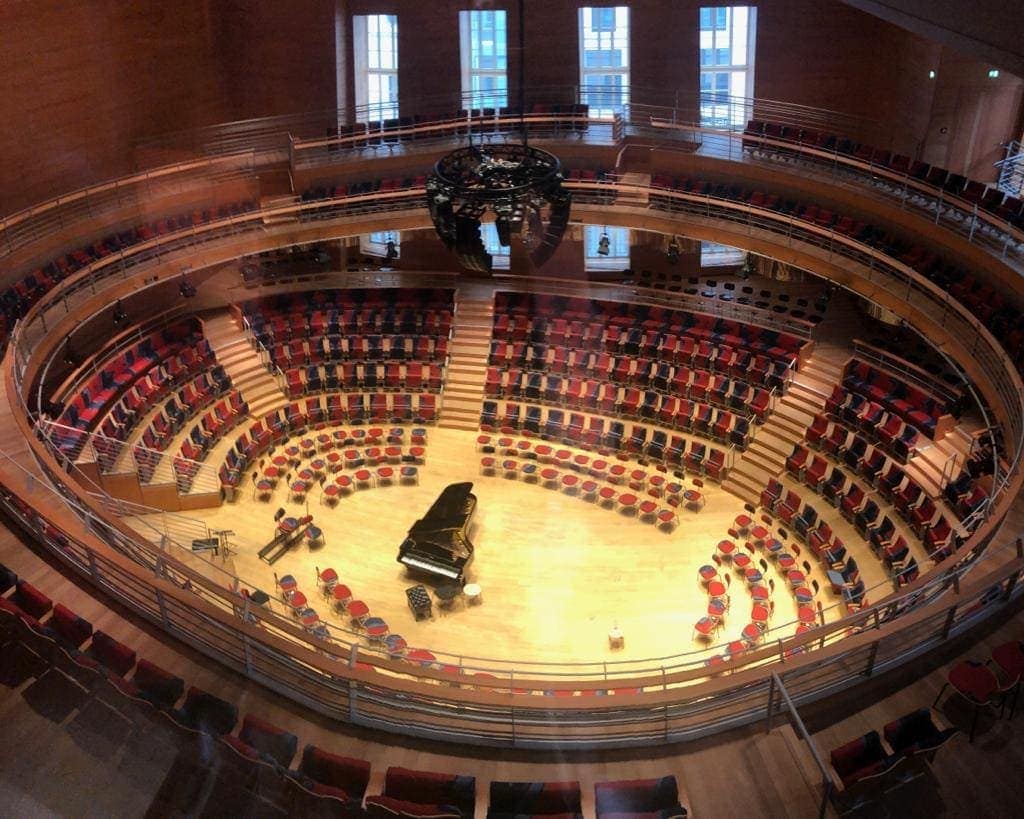 There were other stops along the way, churches that you now couldn’t access because of new buildings next door, people on top of buildings that the kids spotted and Martin explained to them. Many things that we wouldn’t have spotted or wouldn’t have been able to answer had the kids asked.

We spent a little bit of time at Museum Island when we got there. We didn’t have time to go in any of the museums but that wasn’t the purpose of the visit. We did learn that there is a lot of new development going on in that area too to bring all 5 museums together with a single entrance price, and a brand new metro station too. Germans love a good museum, and definitely a good art one at that.

From Museum Island we took the metro to Checkpoint Charlie

Martin was at pains to point out that Checkpoint Charlie wasn’t really his favourite place to bring people in Berlin and when we got there I understood why. It’s what could be referred to as a grocklepot if you know that term, or a tourist trap if you don’t. Things have been created there that never were there in order to satisfy the public who want to see something.   It’s been the setting for many a film but the name Checkpoint Charlie doesn’t come from a memorable soldier as I had always presumed but comes from the NATO phonetic alphabet (Alpha, Bravo, Charlie). After the border crossings at Helmstedt-Marienborn (Alpha) and Dreilinden-Drewitz (Bravo), Checkpoint Charlie was the third checkpoint opened by the Allies in and around Berlin.

We didn’t stay long at this point but long enough to hear more about the wall and where it was laid, about the stories behind Checkpoint Charlie and for a photo opportunity. 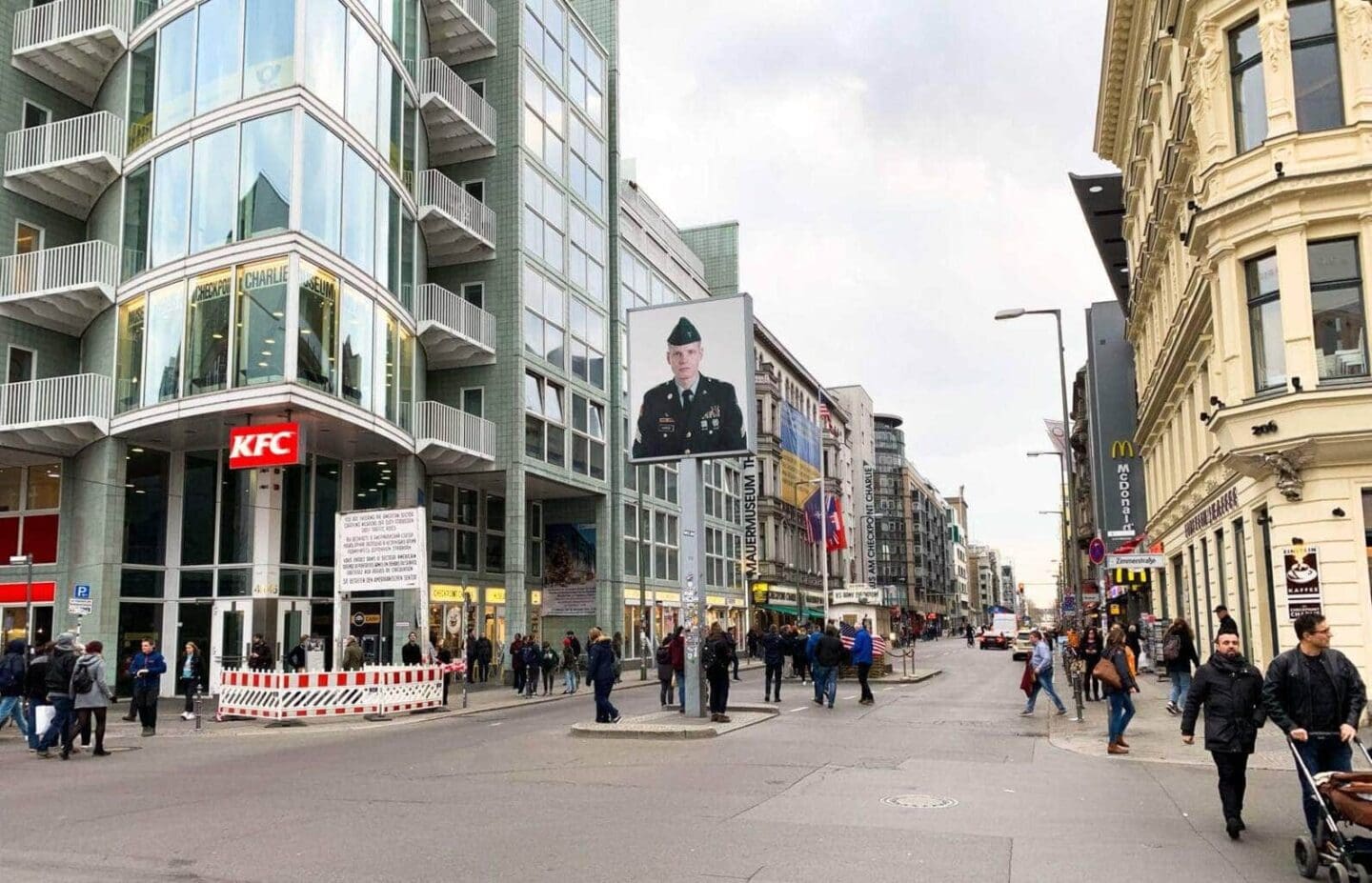 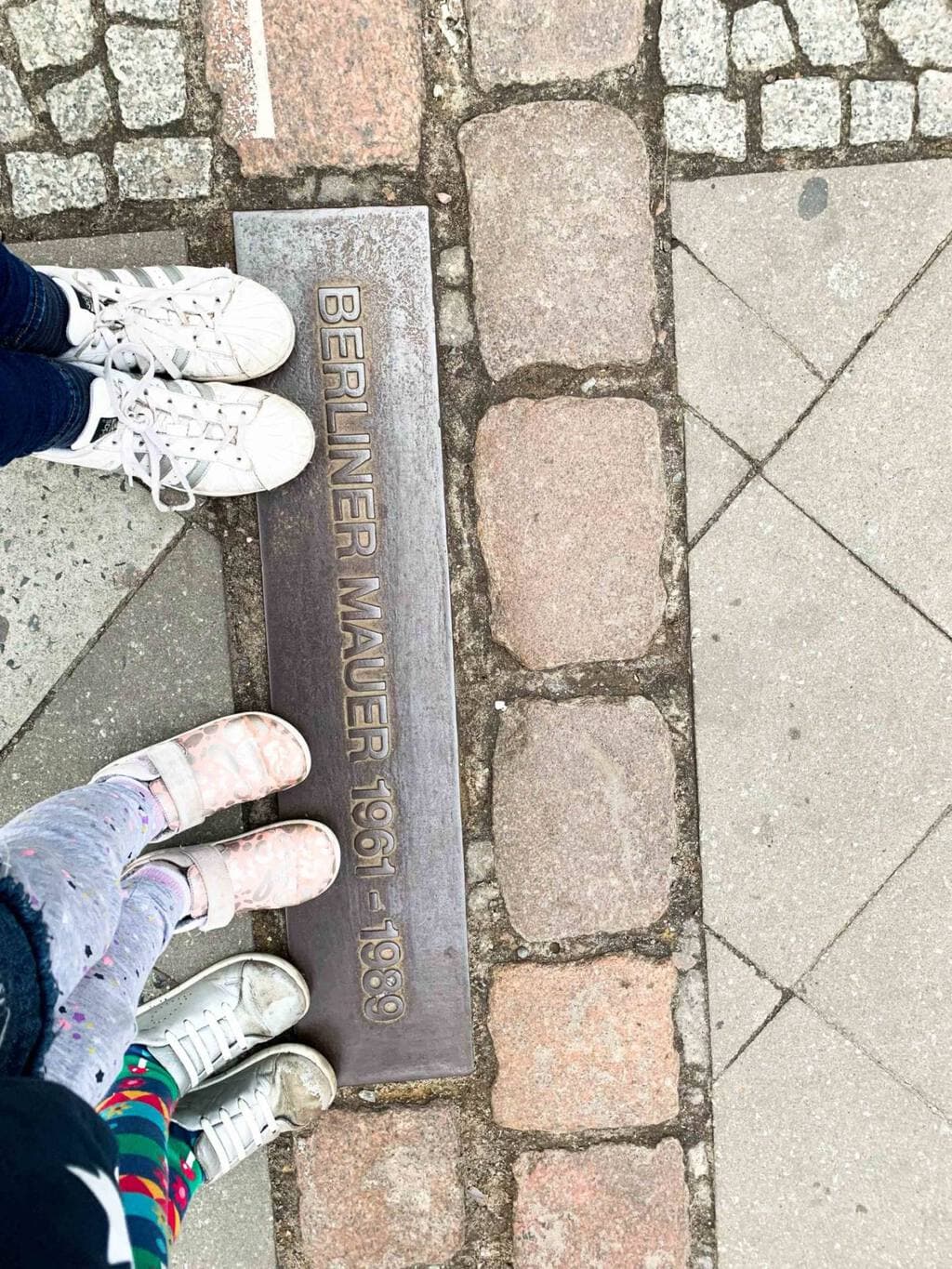 The Wall Museum East Side Gallery

Beyond Checkpoint Charlie is a museum dedicated to the Wall. Again we didn’t actually head into the museum as we didn’t have time but Martin talked to us about the conflicting views over time about whether parts of the wall should be preserved, celebrated, discussed, dedicated? It’s a complicated topic on which there is no right or wrong answer, save for that most seem to agree that the time should not be forgotten and that something at least should be done.

We had this discussion in front of some preserved wall just behind Checkpoint Charlie and with more time I’d have liked to head into the museum for more information. 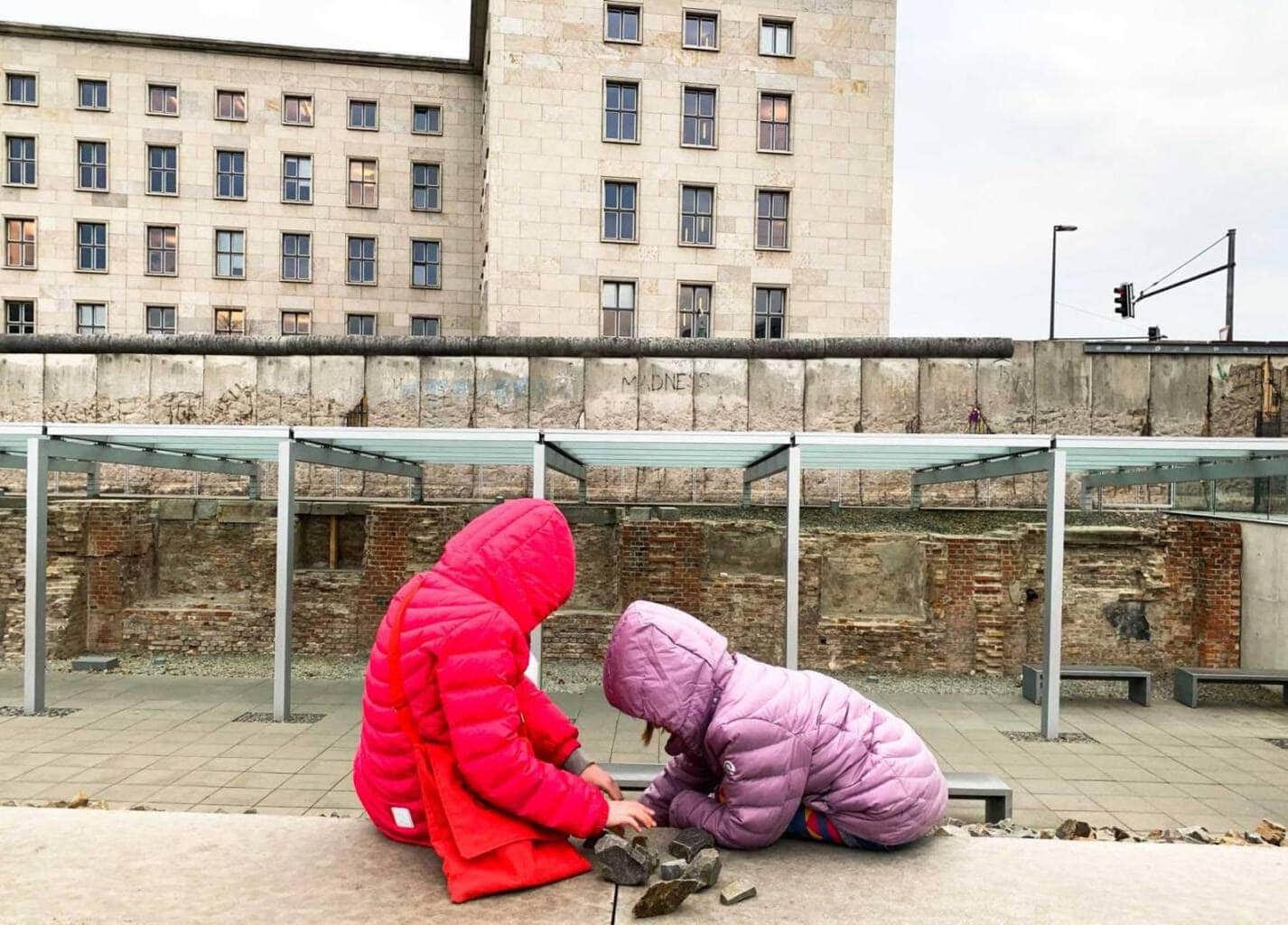 Finally we hopped on public transport again to end the tour at the Brandenburg Gate. We couldn’t have done this tour without seeing it as it really is such an iconic monument in Berlin. To come out of the metro and up to see this famous landmark was quite something. We even went back the next morning. The Brandenburg Gate came to symbolise Berlin’s Cold War division into East and West – and, since the fall of the Wall, a reunified Germany.  It was the perfect place to end the tour, 3 hours after we started!

[ad-hosted] We have pounded the streets here in #berlin to make the most of our 36 hours here. We had an appointment to see the #reichstagdome at 10.15 yesterday so were up and out before the crowds and saw the #brandenburggate with lots less people around. We are on our way back to the airport this morning and I think the #Grandparents will be going home for a rest. Thanks to @visit_berlin for arranging and @adinahotels for hosting us. fearlessfamtrav #visitGermany #wanderlustmomblogger#lovelysquares #takeyourkidseverywhere #halftermholidays #travelkids #familytravelblogger#lpkids #visit_berlin #igersberlin #berlin #diestadtberlin

So what did we think of our Family Friendly Tour of Berlin with Tours by Locals?

We really really enjoyed it. It was exhausting (we packed a lot in at my request) and it wasn’t the most family friendly one we’ve done, but I am really really pleased we did it and we learnt so much from Martin.  We saw far more of the main sights in Berlin than we would have done if we had done it alone and I found the nature of the things we discussed weren’t too harrowing for the kids.  Most of it was over and above their understanding but then the history of the city is. To be fair it was a lot for the adults to take in.

Martin himself was warm and kind and very accommodating and I would highly recommend him for tours of the Berlin.

Thanks again to Tours by Locals for organising this tour. 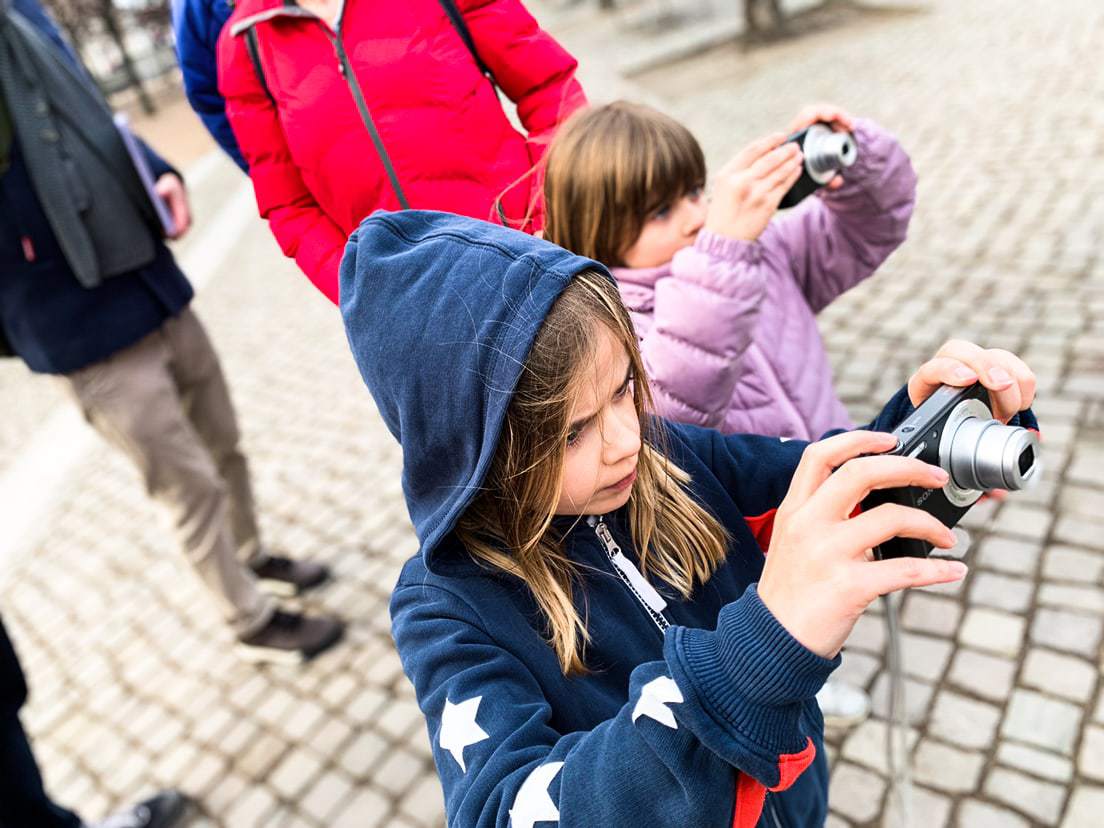 Tips for a Family Friendly Tour in Berlin (and anywhere else for that matter!) 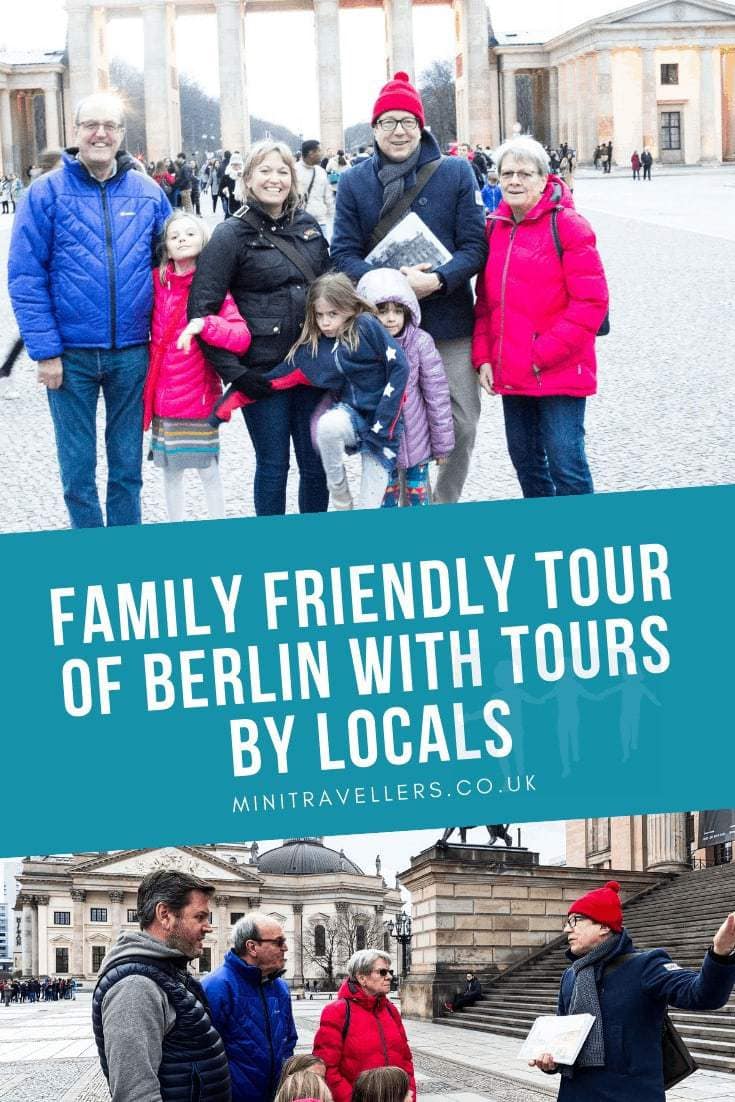