Like many little girls, my 6 year old embraces the gender stereotype of not only loving dancing, but wanting to be a dancer when she grows up (actually she wants to be a dancing vet and part time policewoman/teacher but we will talk about that another time!).

When her Dance Academy put on a performance last summer, one of the sections was a sequence from Cats, during that part my daughter was mesmerised – she has since then had a little bit of an obsession with dressing up as a Cat!
The West End production of Cats has recently been on tour, as one of the locations was Birmingham Hippodrome, we were close enough to be able to make a manageable trip. When booking, I avoided the online system (mainly because this wasn’t compatible with my iPad) and ended up speaking to one of their booking advisors. If you are visiting the Hippodrome with children I would thoroughly recommend this, the gentleman I ended up speaking to was extremely helpful in advising which seats would be best when visiting with a 6 year old and he did a really good job – we ended up very much in perfect position for viewing the show! 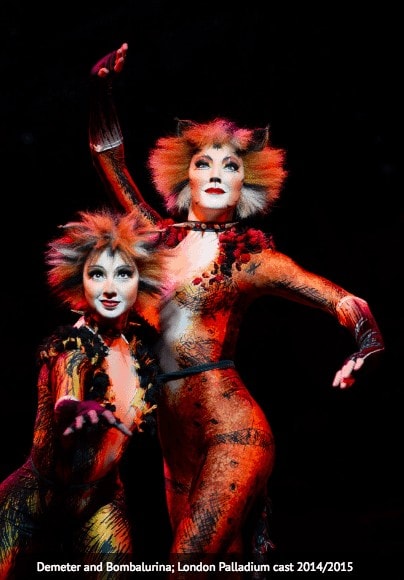 Cats is a bit of a strange musical, as the person sat next to me commented ‘It’s a bit of a funny one for children as there isn’t really a story as such!’ The musical is based on the text ‘Old Possums Book of Practical Cats’ by T. S. Elliot, a book of poems about several rather unusual felines and the musical tells the story of several of these special cats.
As you arrive, the set is an oversized junk yard and therefore a great way to entertain a wriggly child; we spotted packets of Doritos, tyres and the end of a bed to name but a few! The lighting and music is rather loud and mysterious and so a little daunting for a small child to initially cope with. I had listened to the music beforehand when researching whether or not to take my daughter and therefore was able to ‘coach’ her through the starting sequence rather than have her immediately whimper and say ‘I want to go home now’, yes, this has happened to us before!

The show is a spectacle of fast paced dancing, spectacular costumes, live music and song. The first half is a little slower for a youngster than the second (the second half contains more songs about individual cats and so is arguably easier for a child to follow) but I have to say, the bag of snacks I took with me, for the first time ever on a theatre trip, remained unopened…testament indeed to the show!
Although I would say this isn’t for children below the age of 5, there were certainly children younger than that in the theatre (although not near us so I can’t comment on how they found the experience). What I would say though is we had our first experience of ‘tutting’ from a lady sat in front of us who muttered about ‘this not being a place for a child’ and then proceeded to tell me my daughter was kicking her in the back (she was wriggling to get comfy in the seat, it’s not easy when your legs are straight as the chairs are too big for you!) so I thought I would add this as a word of warning for any parents who are considering a trip to the theatre…we ended up with a booster seat for the first half which elevated the problem somewhat!
So Cats was a success and ended with a great surprise which even I couldn’t figure out! We enjoyed it so much that the focus of several car journeys since has been ‘Which was your favourite cat?’ The winner? MaCavity! Why? Well, you will have to watch it to find that out won’t you!

Just as a point of interest, I have recently come across these children’s versions of the books…maybe worth a look if you are planning on seeing ‘Cats’ with any children!

NB: Rachel did not receive tickets to see Cats, she just enjoyed the show so wanted to share her experience with you.