On Boxing Day we did something we had never done before. We left the house (shock horror!) and we went out to the cinema to see Mary Poppins Returns and then out for tea to Bella Italia.

Having been responsible for feeding  about eight billion people since the kids finished school on the Friday before Christmas (Ok a slight exaggeration) it was a treat that I dressed up for the kids but it was actually for me!

I had deliberately not looked at the reviews before we went to see Mary Poppins Returns. I had decided we were going to go anyway so I wanted to make my own mind up about it. Since we’ve been I’ve realised that the reviews are fairly mixed for it. However I loved it. It was like getting a large warm cuddle. It was familiar but different and I really did love Emily Blunt.  I had seen her on Graham Norton over the Christmas period and immediately new she was going to make a super Mary Poppins, even when you would have thought there was no beating Julie Andrews.

The story starts properly when a small boy named Georgie Banks (Joel Dawson) runs through the park chasing his father’s old’ let’s go fly a kite’ kite that gets carried away by the wind. He grabs the string, and the string pulls him up into the air before he is brought back down to earth by Jack (Lin-Manuel Miranda), a lamplighter who happens to be passing. When the pair pull in the kite they also reel in Mary Poppins (Emily Blunt).  When Georgie runs home he shouts “I was flying a kite and it got caught on a nanny!”.  If you want to read a full review of Mary Poppins though there are many to be found online but I did like this write up of Mary Poppins returns  in The New Yorker!

After leaving the cinema and feeling all warm and cosy about the world we headed into Bella Italia. Now I know on Boxing Day you might not think an Italian meal is an essential but to be honest it was lovely to eat something I hadn’t cooked, and to also eat something that didn’t involve turkey or pork products as much as I love them.

The kids never changing from their standard Bella Italia Kids meal – full review can be found here, ordered garlic bread, without cheese, margerita for 2 and one spag bol followed by gelato. I had the gamberetti which I loved followed by a pizza. Bizzarely for someone who loves Pizza and who has been to Bella Italia around 6 times in the last couple of months I had never actually tried it and it was the perfect antidote to Christmas food. I didn’t think it looked that pretty to be honest but it tasted very good!  My husband had soup and a salad which both went down well and my mother in law just stuck to the bruchetta which she enjoyed.

I really am very impressed with the variety on the Bella Italia menu particularly when compared with Pizza Express.

If you are also a Pizza Express fan, why not give it a try next time you’re out and about!  You may just be surprised! 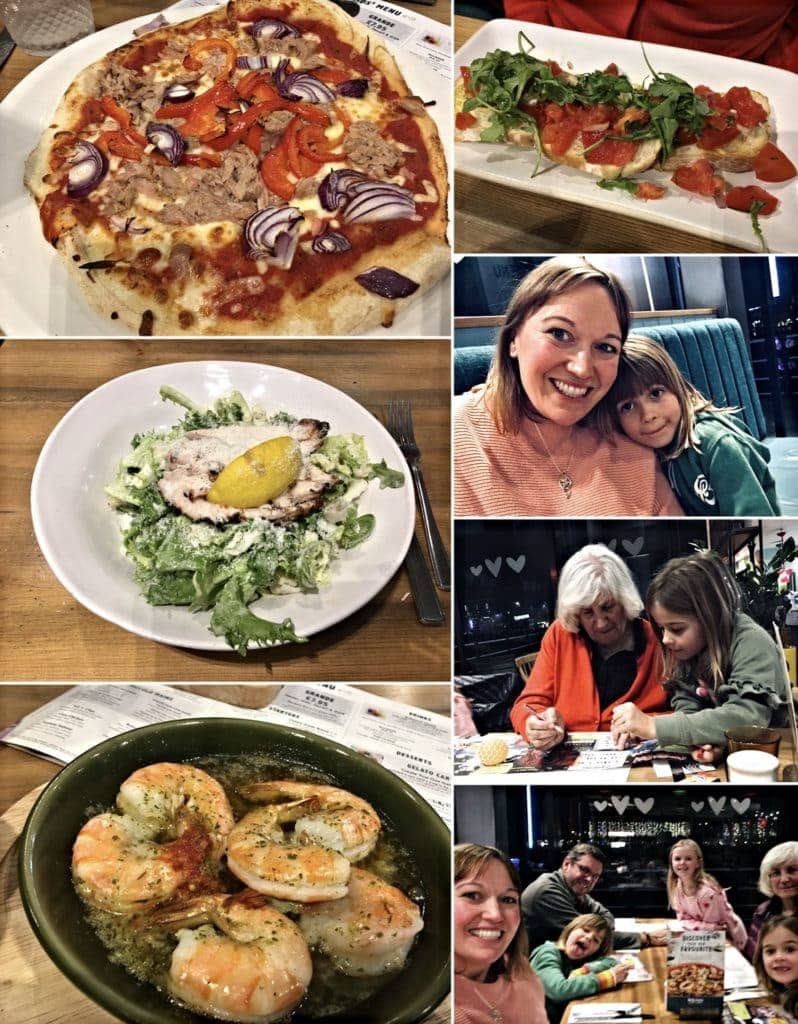 Boxing Day is the perfect day for cinema and tea out. I've booked somewhere this weekend and can't wait to eat something that isn't buffet!

I know it is buffet tastic at the moment isn't it!