As a child, most of my summer holidays were spent driving round France experiencing the culture, food and scenery. The favourite parts of my trip were always where we had access to a swimming pool where I could play with my sisters or newly made friends. The worst part of the holiday was always the time spent in the back of the car. I decided to try and emulate the best parts of my France experiences and craft the perfect holiday for me and my wife, 3 children (2yo, 9yo and 11yo) and 2 grandmothers.

The specification for my “perfect” holiday was: South of France, private pool, not too much driving.

Highlights for the kids: Swimming, visiting Italy and Wi-Fi.

Highlights for the adults: The views, relaxation and food.

I had my heart set on a villa near the Côte d’Azur with a swimming pool. We booked through Airbnb around a year in advance, which proved slightly problematic. The first few we tried to book replied to say that the advertised price was incorrect and that it would be 2 to 3 times more. Eventually we found one with an English owner near the town of Sospel, in the Mercantour National Park, about an hour’s drive from Nice.

The villa (you can find it here on Airbnb) exceeded our expectations. From the outside, it was traditional looking: a large terrace with a decent sized private pool, BBQ area, dining area and a choice of seating positions so you could find shade throughout the day. The views of the tree covered mountains was breathtaking and at the backdrop for the whole holiday. Inside had been completely refurbished with a huge contemporary living area, 4 bedrooms and 2 modern bathrooms. A long balcony ran the full length of the upstairs, with a covered lounging area for master bedroom. There was plenty of private parking for at least 4 cars.

The house was extremely well equipped for family life including: Wi-Fi (much to the relief of 11yo), dishwasher and washing machine. Previous occupants had built up a good reserve of essentials in the larder which saved having to spend a lot on condiments, herbs and spices. The owners clearly had had young children and there was an extensive collection of children’s toys and games.

Daily life included lounging by the pool; bread, ham and cheese for lunch; a glass of wine or two late afternoon (from about 11am); and evening meals of BBQs, Confit De Canard, or pasta. The older kids spent a bit too much time in their bedrooms hooked up to devices, but also spent hours playing in the pool and playing card games with the adults.

If you’re used to a few mosquitos and other bugs on your usual seaside holidays, be prepared that being inland and in a heavily wooded area means lots and lots of bugs. The adults suffered most from the mosquitos, probably from sitting out on an evening; we tried all manner of natural and industrial strength deterrents. During the day the children soon got used to the oversized grasshoppers, crickets and other wildlife abundant in the undergrowth. 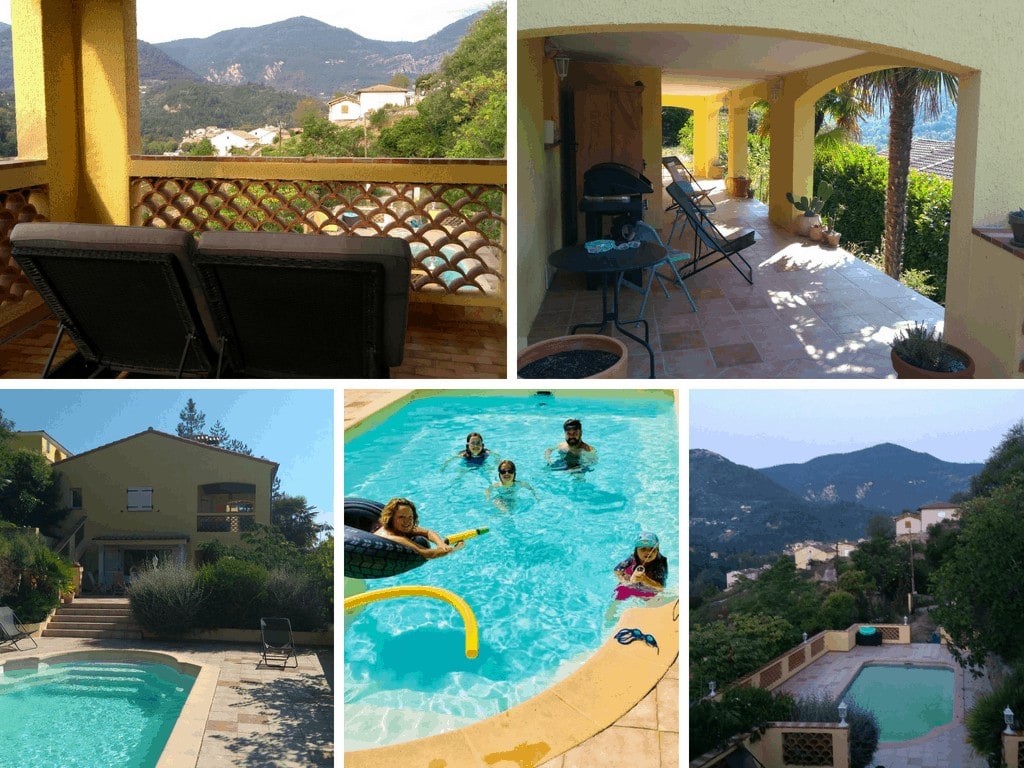 The Location and Activities on our DIY French Alps Summer Holiday

The Mercantour National Park is hundreds of square miles of protected forest, beautiful villages and winding roads. The town of Sospel, situated between densely wooded mountains, is well known for mountain biking. The house we stayed in was owned by ridesospel.com; it was geared up for mountain bikers, with a large garage workshop, and situated close to many routes of varying difficulty. There is a launch for paragliding about 20 minutes drive, with a designated landing area close to the town centre.

With 2 grandmothers and a 2 year old, we hadn’t planned it as an outdoor activity holiday. In August it was a bit too hot for long hikes; one morning we all set out to climb the hill behind us, the kids made it about ¼ of the way before having to turn back. Most days were spent relaxing around the house or having short drives out to nearby towns and villages. We had 2 runs out to Italy, which was only around 30 minutes away and enjoyed some amazing homemade pasta and seafood.

The local town is quite sparse for shops, but there are plenty of bars and restaurants, a few of which are situated overlooking the river which dominates the layout. We’d recommend La Cabraia for an excellent value lunch and Le Picoun for handmade pizzas and traditional main courses. There is an ancient bridge and an ornate cathedral to see, but the quaint streets are worth exploring.

Sospel is situated on the Maginot Line, a string of fortifications built during the 1930s to deter German invasion. These fortifications can be seen clearly on the top of mountains and in valleys and are open at specific times. We took the kids to see the nearby Gros Ouvrage de St Roch, a network of tunnels linking 4 fortified blockhouses. The kids really enjoyed exploring and discovering the well maintained operations rooms and living quarters.

The nearest supermarket was about 30 minutes away near Menton. As we were spending large amounts of time at the villa, it was important to get well stocked up with food and drink. Although food in France is not generally cheap, it was better value to stock up at the supermarket. That being said, there was a boulangerie, patisserie, charcuterie, boucherie, convenience store and pharmacy in Sospel for emergency provisions and high quality local produce. 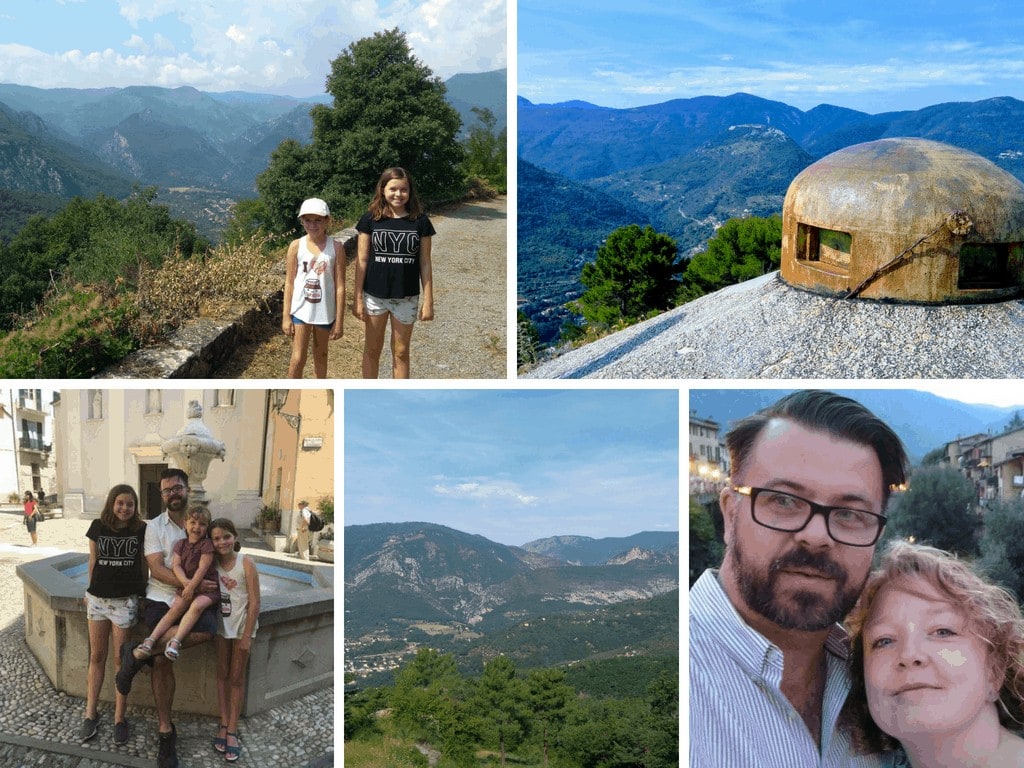 We originally found flights with Jet2 from our closest airport, Leeds/Bradford, but after shopping around we found flights with British Airways from Heathrow for less than half the price. We decided to book the cheaper flights and absorb the extra costs of petrol and car parking. The drive to and from the airport was unpleasant to say the least and next time we would definitely shop around to find more convenient flights.

This was probably the most stressful part of the whole holiday. We had not really done our homework on this and we’d paid for the full damage collision waiver when we booked online. When we picked up our cars we found that this insurance was not through the car hire company, but a third party, and that we would be charged any excesses and have to pay these back. After later research we discovered that we’d actually done the right thing; articles we read said never get the hugely inflated insurance from the car hire company. The stress was caused deliberately by the car hire salesmen trying to upsell us the insurance. After we had picked up the cars, we discovered a few minor scratches and became convinced we were going to get charged the excess, but when we dropped the cars off, little attention was paid to the bodywork.

Setting off in a hire car from Nice Airport is a baptism of fire for those getting used to a different vehicle and driving conditions. The traffic near the coast along the entire Côte d’Azur is very busy, but roads are generally quiet once you get away from the built up areas. As the terrain is very rugged, the side roads snake through the passes to reveal stunning views at every turn. The local drivers are impatient and will overtake in places you wouldn’t have thought possible; it’s best to pull over and let them pass to allow you to take your time and enjoy the view.

It was the beautiful home in an exceptional setting made the memories of this holiday. I would have loved to spent more time exploring the local area, perhaps doing some hiking, but the heat meant that relaxing around terrace whilst the children played in the pool was the preferred modus operandi. Having the luxury of a fully equipped home takes away a lot of the stress of looking after a toddler.

NB: Ben and family paid full price for their holiday and simply submitted a review because they loved their trip so much! 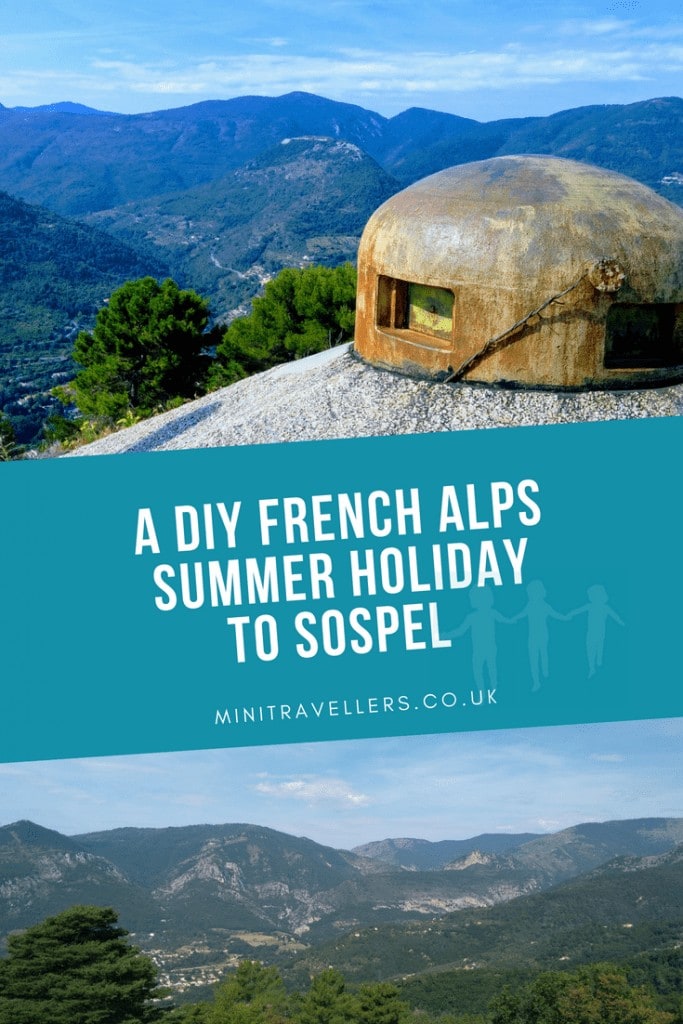