It’s probably easier to ask what isn’t going on in Liverpool this festive season than what is. Branded and using the hashtag #OneMagicalCity Liverpool is most definitely magical this season.

I have received more invitations than I could attend this year but on Saturday we tried to fit as many of them as we could into one full day. 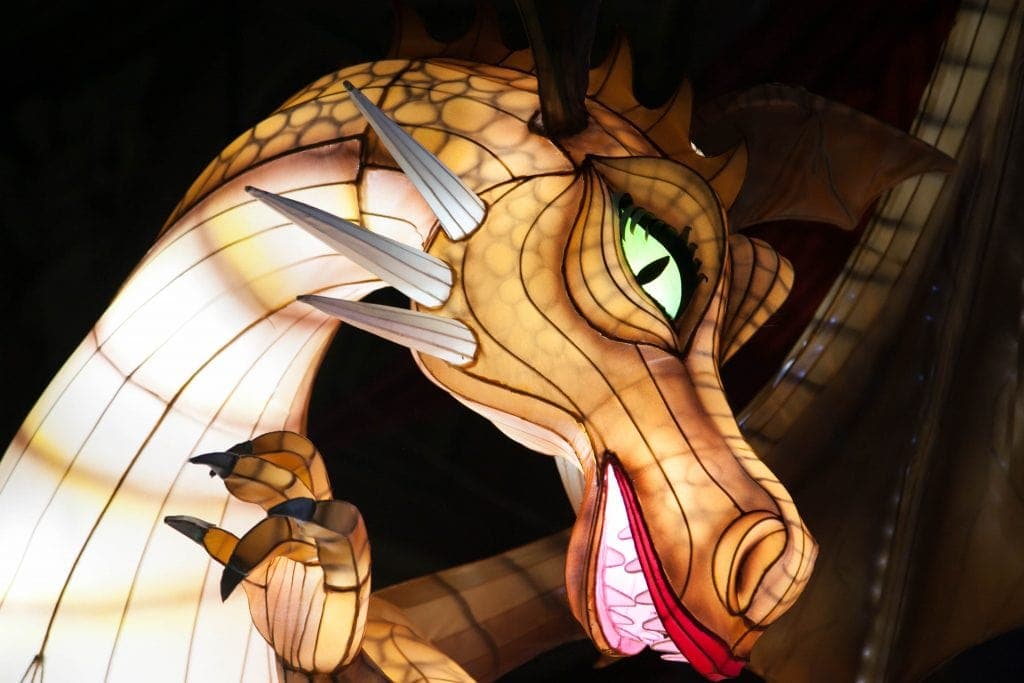 Starting with Dreamworks at St George’s Hall (where we had already been to Storytime with Santa at the end of November) we made our way through the Christmas Markets to the grand front entrance to St George’s Hall and made our way inside. Our tickets were for 12 but there was no issue with us arriving at 11.45. I do like a bit of pragmatism when it comes to timings. We could immediately see the enormous dragon hanging from the ceilings and the girls frantically started calling out characters they could see – Mum it’s Kong Fu Panda, Mum it’s the donkey from Shrek. Mum Mum Mum.

Dreamworks is described on their website as a walk through experience with”illuminating surprises awaiting you around every corner” You’re invited to “come along and meet Shrek, Alex, Po and friends at DreamWorks Lights this Christmas. It’s a Shrektacular event, encompassing over 100 figures of your favourite characters and 20 enlightening and Ogre-whelming scenes based on three major DreamWorks feature film productions – Shrek, Kung Fu Panda and Madagascar.” 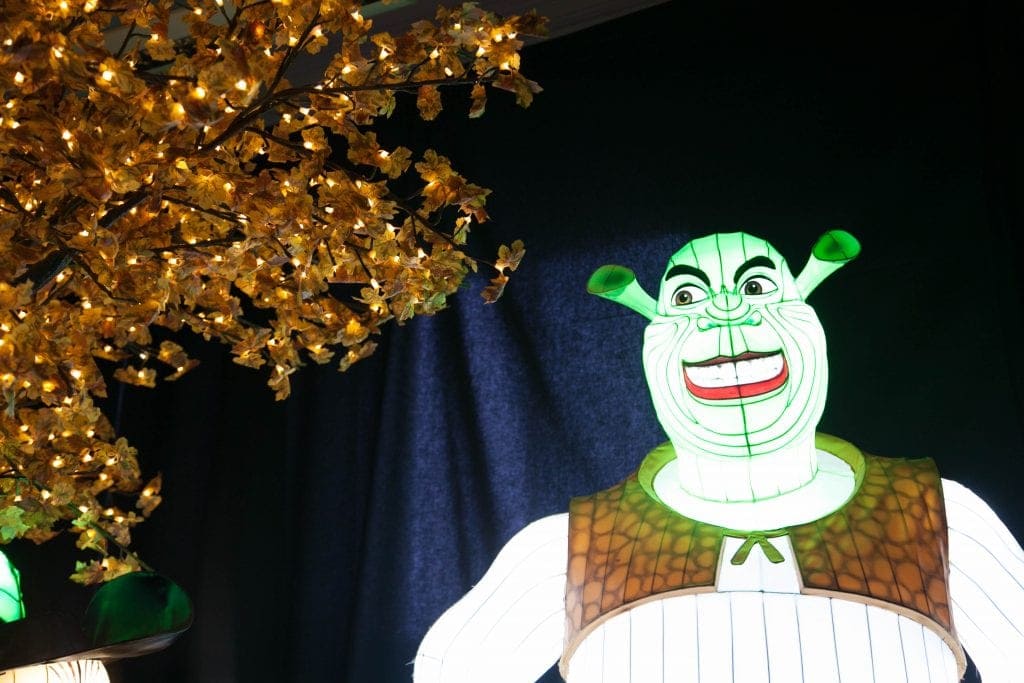 We made our way round slowly as a friend had said their experience was over quite quickly. This unfortunately is Dreamworks flaw. If you have children who can’t wait to see what’s next. You can easily be done within half an hour, even if you make them pause for countless photos and read a lot of the signs. The tickets for our family of 5 would have been (£44) and had that been what we had paid I really think I would have been disappointed that it was over so quickly.

The lanterns however were excellent and the work that must have gone into them (hence the price I assume) was clear for all the adults to see. The only problem is that children don’t think like that. They don’t spend longer looking because it must have taken an age to make!

The price is also on a par to Chester Zoo Lantern Parade, the Elf Adventure and the Ice Skating (below), so this may simply be the price for events of this type this year.

The kids however were happy,  they had enjoyed the trip and now it was time for lunch. We wandered from St George’s Hall down through the shopping centre to Liverpool One. We’d have liked to have visited The World Museum, which we love as it is free but unfortunately we didn’t have time. We can highly recommend Big Art at The Walker Art Gallery too! 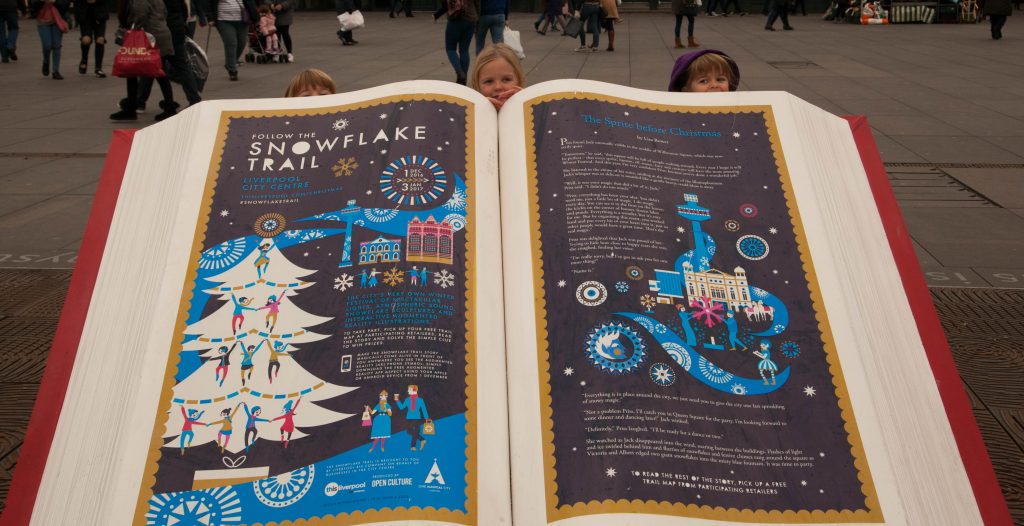 We did however find a few of the snowflakes from the Snowflake Trail and stopped long enough to take some photos, work out what they were showing us, oh and end up singing a song for Radio Liverpool’s Singalong Saveaway competition!

Liverpool really does know how to dress itself up for Christmas and the lights and decorations kept the kids entertained on the wander through town. Our lunch at Red True BBQ wasn’t booked until 1.30pm so we had some fun on the rides at Chavasse Park on the upper level of Liverpool One. You buy your tokens beforehand from the little kiosk and then use these to pay as you go. Mine loved the helter skelter and two of them loved the little rollercoaster, although one cried all the way round! 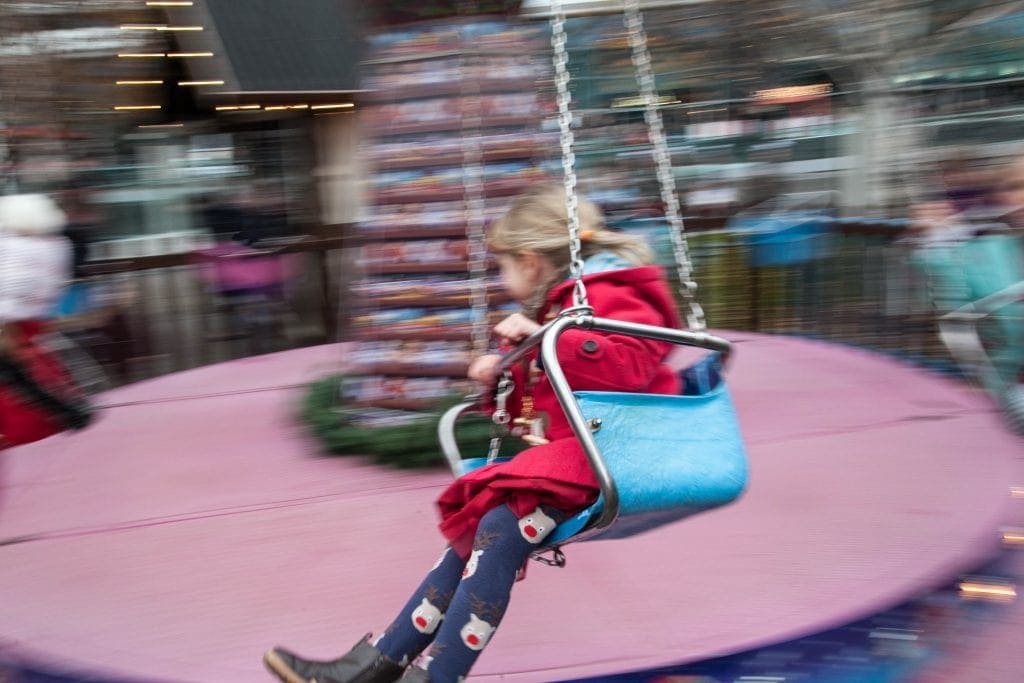 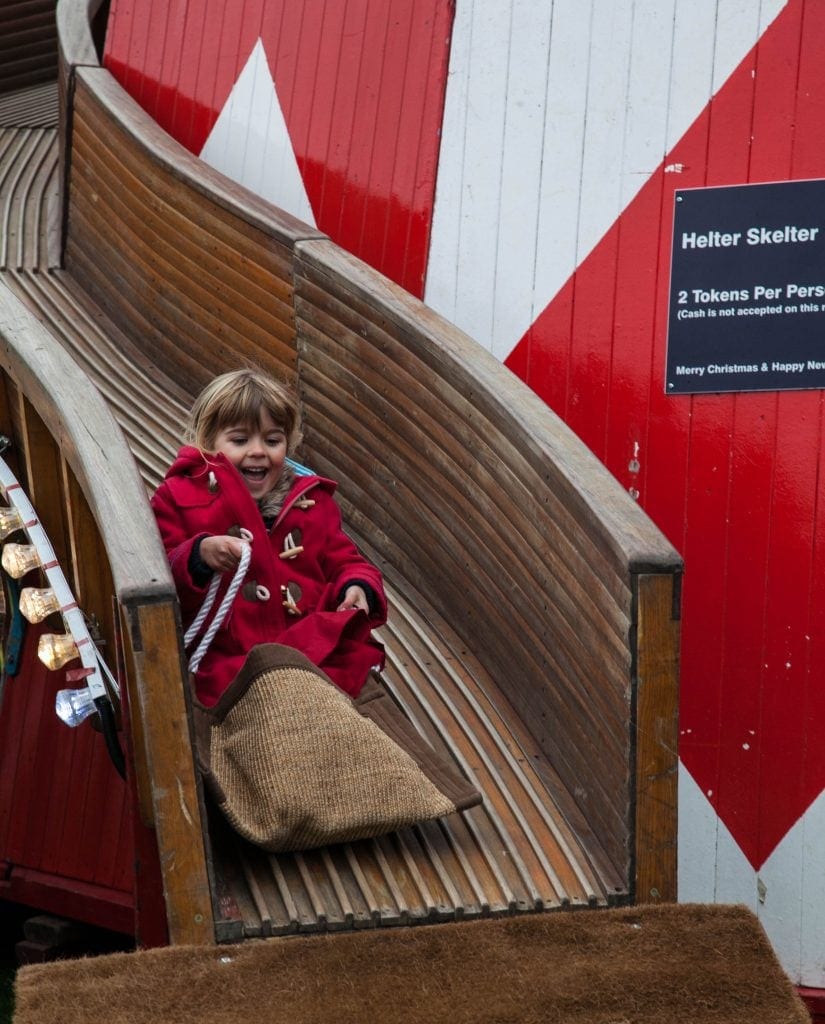 Red True BBQ is a little out of Liverpool One on Hanover Street but this is where a lot of the hidden gems of a Liverpool can be found. The chains are in Liverpool One and the independents or smaller chains just outside. On arrival it was suggested that we have the Christmas Feast to experience what Red True BBQ offer. This was effectively a platter of Christmas Dinner but in a smokey BBQ style. Technically for 4 adults so a challenge for 2 adults and 3 small people who often eat nothing. I was also vaguely concerned that they wouldn’t like anything due to the smokey. BBQ nature of the feast. I couldn’t have been more wrong. 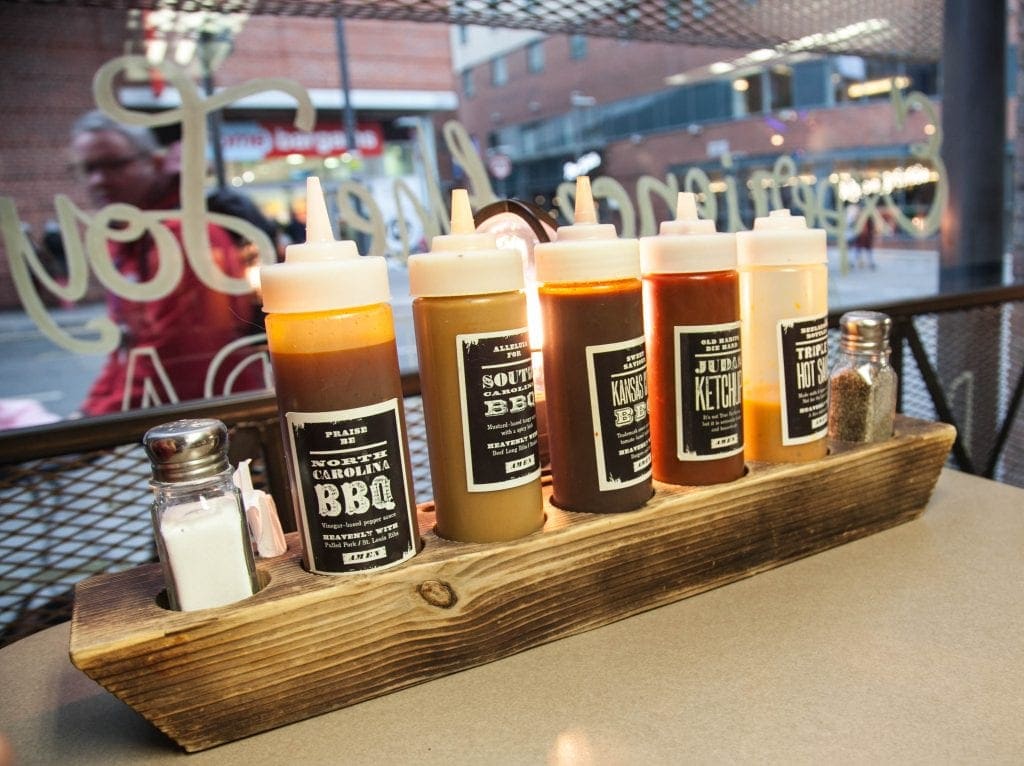 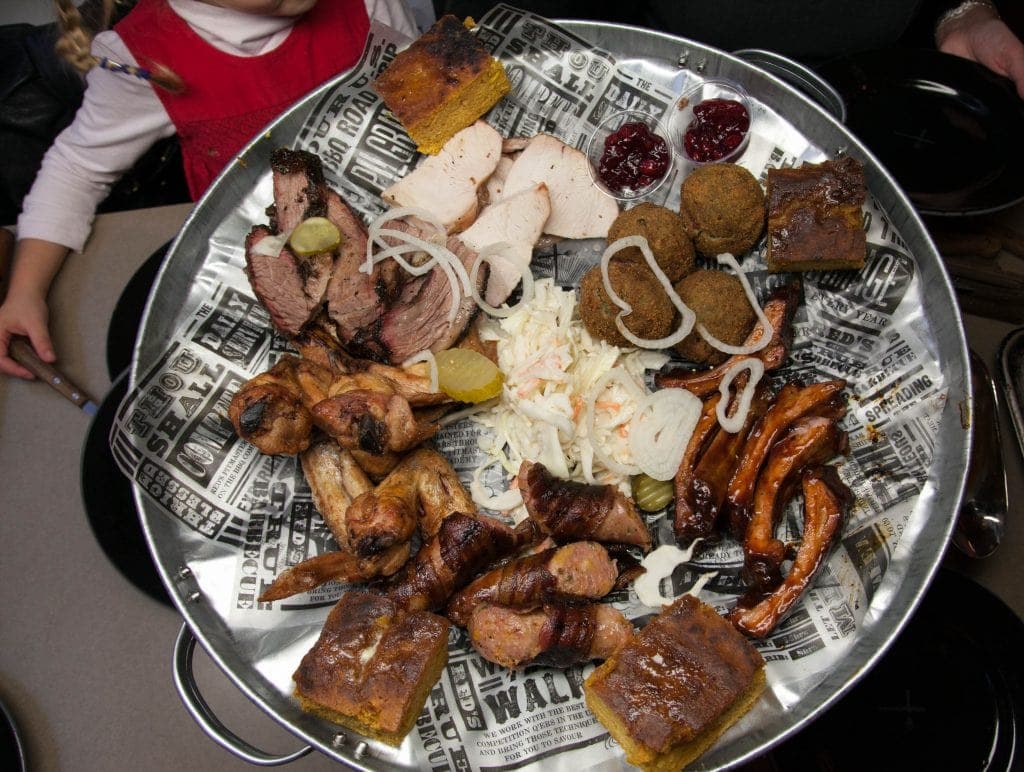 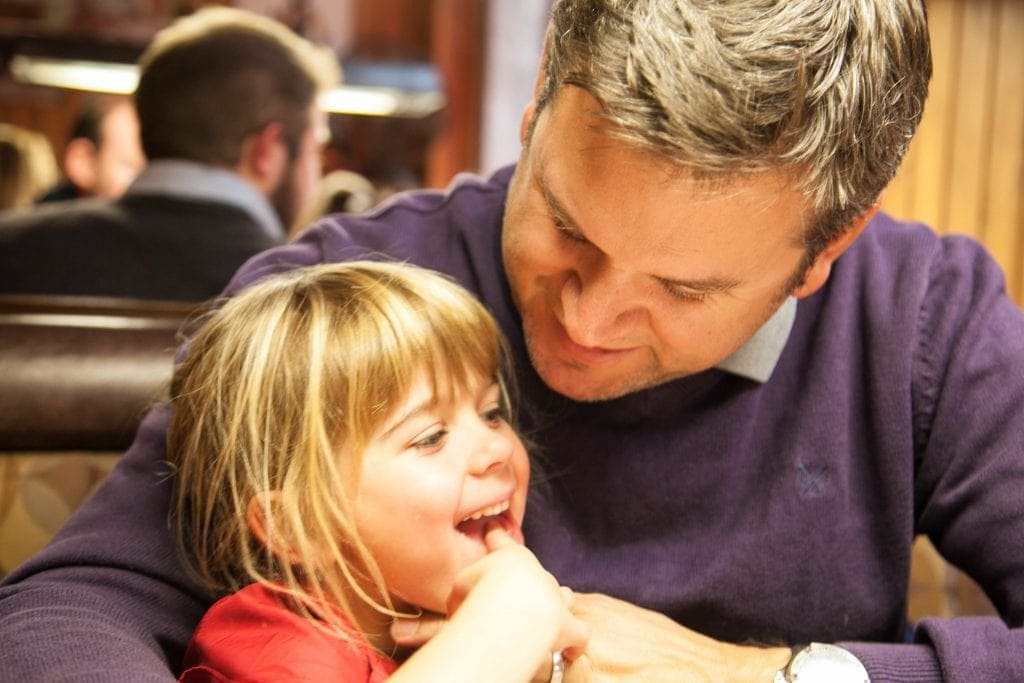 The feast was huge! A feast indeed. There was turkey, brisket, chicken wings, amazing ribs, sausages, jalapeño sausages (oh my word those were amazing) grits, smokey turkey gravy, chips, mash, cabbage, cauliflower cheese. I’m sure I’ve forgotten something but whatever it is you won’t go hungry! It was all served with a smile and the girls loved it! They loved the ribs (you can see the smears on their faces) and the mash was deemed the best mash ever. I always know the food has been a hit when there is chips left at the end of the meal but all the meat has gone!

A real success and we would definitely go back. 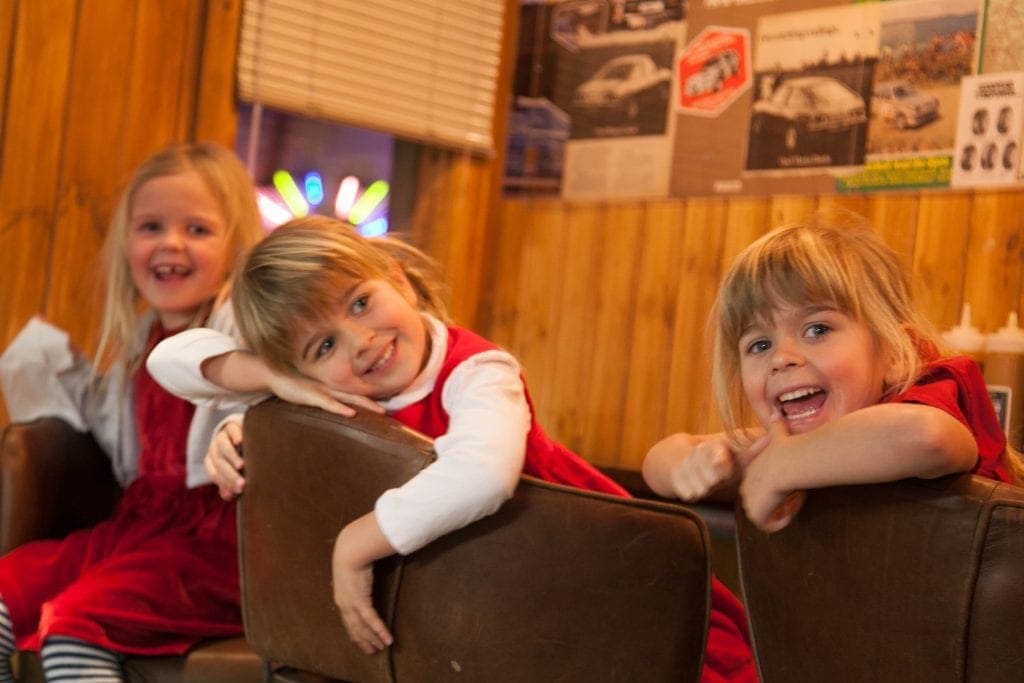 After lunch it was time to visit the Ice Festival down at Pierhead. We wandered down unfortunately at the same time as the rest of Liverpool and as we hadn’t booked a slot for the ice skating/ice slide found ourselves unable to get on the ice skating and with an hour and a half queue for the ice slide!

Top Tip: book a slot for ice skating or visit on a weekday evening!

In order to do the ice skating we promised the kids I went back to the Ice Festival on Tuesday evening after school. This turned out to be an excellent idea for the ice slide as at 4.30pm when we arrived it was completely empty. No queue at all. The girls absolutely loved it and would have gone on again and again and again. They loved each of their 3 turns as did I! It was a real blast! Ask them to spin you!

The ice skating however was maybe not the best idea!! Turns out there are somethings that it’s maybe best not to attempt on your own with three under 6. We even hired the penguins to assist the stability (£5 each) but our first circuit round took nearly 15 minutes and there was a LOT of falls and tears. I think the rest of the people on the ice thought we were crazy: in fairness to the staff on the ice they did their best to look out for them but I was really very glad it was quiet as it would have been impossible had we managed to get on on Saturday.

The ice rink is clearly set up for kids ages 3-12 as that’s a ticket price and they do have the right size shoes. I would however have liked a little more help from the staff. After 10 minutes of me trying to get the boots on three girls who clearly couldn’t get their own boots on, I asked a member of the staff for help, which in fairness to them they did, however they could see I was struggling and it would have been nice if they would have offered. We were then left to drag the large penguins onto the ice ourselves (with ice skates on) whilst they chatted. A kind couple stopped to help but some assistance from the team would have been really appreciated. 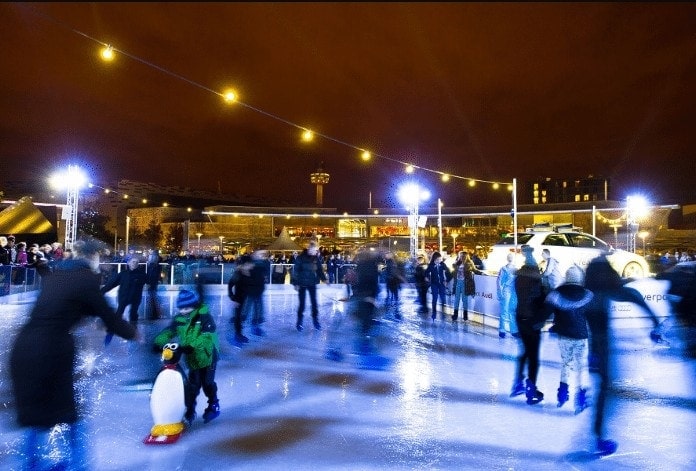 So after the first ten minutes of ice skating I did wonder what on earth I was doing. Was this fun?!? Why had I said I would do it. At the end of the 45 minutes it was a different story, we had actually all grasped it ( a little bit anyway) and the twins were literally beaming. They had absolutely loved it!  We had coped after all!

We finished the evening with a trip to the Ice Bar which is right next door to the Ice Rink and Ice Slide.  More for amusement really than anything else and to see how long the girls lasted! We looked quite ridiculous in the large foil wraps to keep you warm but the girls thought it was lots of fun. Yes that’s hubby who turned up just after the Ice Skating fun (fiasco!).

We had a good giggle in the Ice Bar @LivXmasIceFest #onemagicalcity #liverpool it was very very cold!!

So apologies for the length of this post but there really is a lot going on in Liverpool this Christmas!

NB: We received complimentary tickets to the activities above but all views and opinions are my own.

Our daughter, son in law & 21 month old granddaughter came to us for Christmas, so one day we took them to the funfair at Liverpool One. We were a bit disappointed as the only ride for those under 3 was the merry go round, even the little train that just goes round a track quite slowly was for over 3's only. Parents & grandparents of toddlers should be aware that there is only one suitable ride for them. However, our granddaughter did enjoy the merry go round and went on it twice.

SO much going on in Liverpool. Despite us being only 20 minutes away on the train, we very rarely go into the city. Though the Reds BBQ looks amazing, and I know we would love it in there. Great picture with your foil blankets on x

What a fabulous festive day! Bet you were all worn out and slept well that night.

I love the idea of the Christmas platter to share at Reds - a branch has just opened in Newcastle so I'll have to try and visit before they take it off the menu!

We always just pop to Manchester and I always tend to forget there's Liverpool too. It sounds so good and like you could spend a good few days there. The BBQ feast looks amazing!

It looks so great, I think we will need to stay over that way and see for ourselves x