During the summer holidays, I visited the Forbidden Corner in the Yorkshire Dales with a friend. Between us we have five children between the ages of 6 and 10. My friend and her children had been before and were really excited about taking us, as they claimed it was a fantastic day out.

They’d tried to describe the Forbidden Corner but said they didn’t want to tell us too much as it would spoil it, so other than the fact it was ‘amazing’, we might get wet and we may be a bit scared in some places, we really had no idea what was in store! Now we’ve been, I can fully understand why it’s such a difficult place to describe. I’ll try in this review to give you an idea without ruining any of the fun….

Apparently a chap built the Forbidden Corner as a private folly, which he then opened to the public. It’s set in woodland overlooking the stunning Yorkshire Dales, and there are amazing views from a number of places. 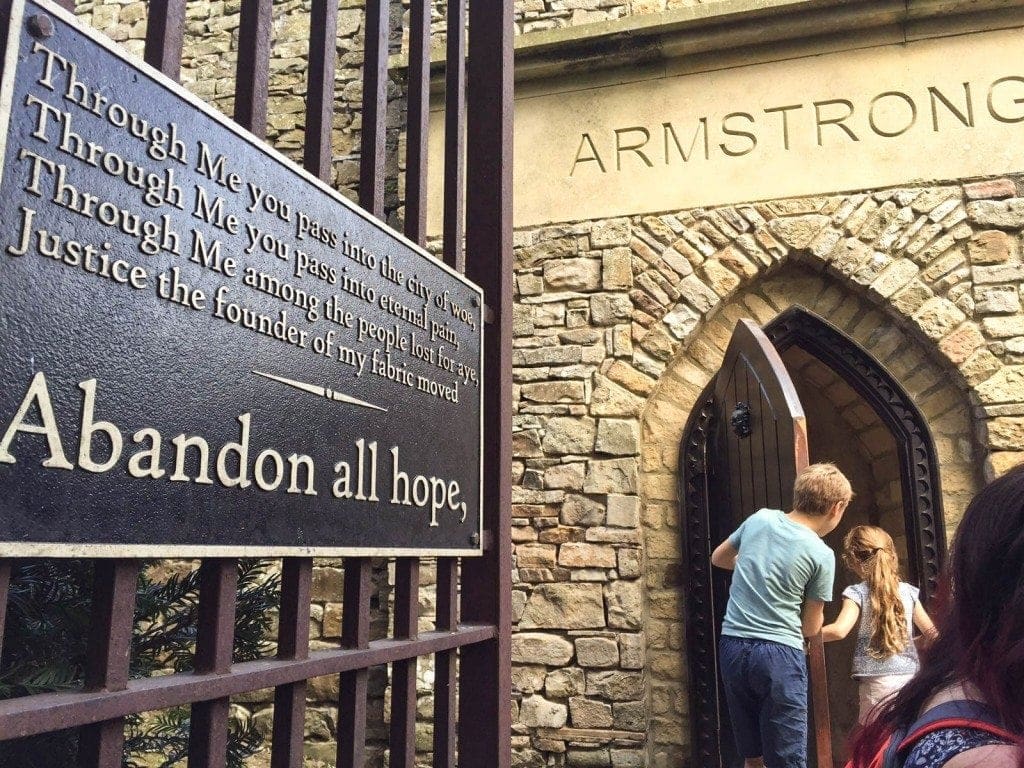 Once through the imposing stone entrance gate at the Forbidden Corner, we had to walk through a giant dragon’s mouth, with the first surprise being an extremely loud burp triggered by walking past a sensor. Then, we were into a wood and were met with a stone plaque telling us that there were three possible paths, with only one being the right one. We chose the first path, taking us on a forest path through a trick gate, with more surprises on the way ( involving dead ends and spurting water!), before ending up right back where we started.

We took another path, leading us to a tree maze with more dead ends and fun things to look at, and then back to the start! Finally, we took the right path leading to a door to the next part of the Forbidden Corner. We walked through beautiful flower gardens, with more opportunities to get wet, and with puzzles and riddles to work out. We’d been given a sheet at the start with circles for each letter of ‘Forbidden Corner’ and had fun looking for the brass letter plaques around the place so we could do brass rubbings of all the letters. 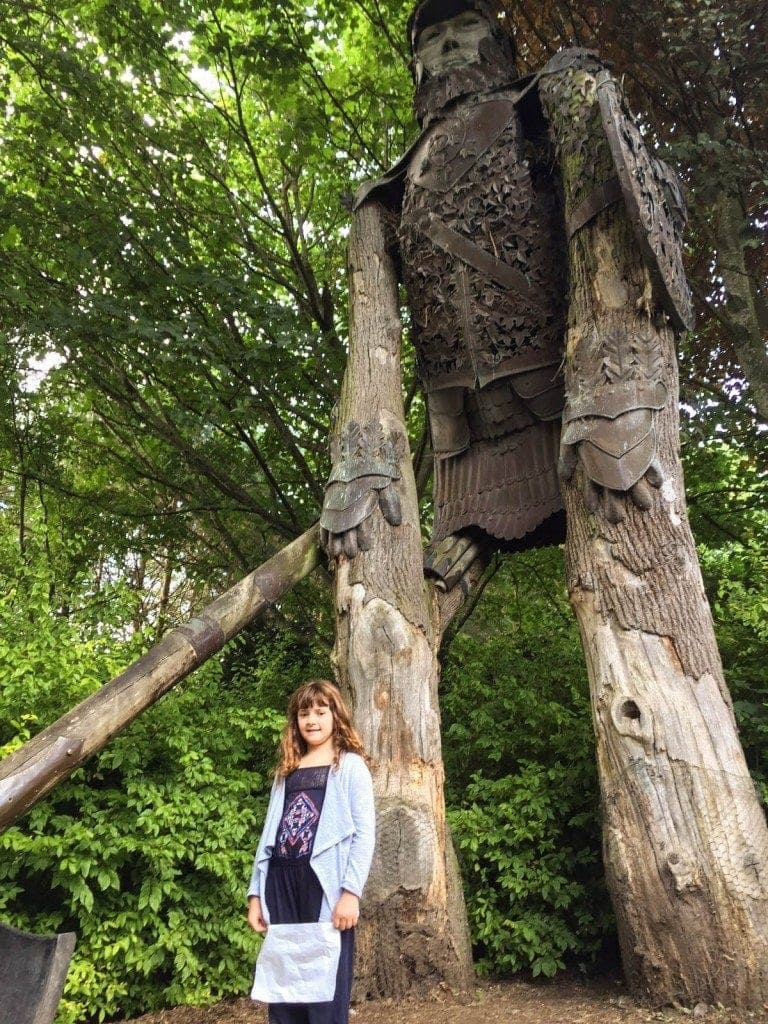 My friend Abbie’s children had been building up the ‘scary bit’ all morning and finally we found the Armstrong family mausoleum- a small building apparently housing the bodies of the Armstrong family, with a sign outside warning that you’ll need to abandon all hope to enter. My oldest daughter is very easily scared so refused point blank to go in, so Abbie took the other four in by herself while Mimi and I sat in the sunshine, hope still intact, and admired the view. We could hear quite a bit of screaming but when they came out five minutes later they were fortunately all smiles. I popped in to have a quick look and found it quite spooky – as you walk through, various sensors trigger the lighting up of skeletons in coffins, or coffin slowly opening.  There’s nothing particularly terrifying in there, it’s more the anticipation of what may be about to jump out.

Then it was on to what seemed to be the main section, where doors in brick walls led down to all sorts of surprises, including another chance to get soaked. Somehow the kids managed to work out the sensors and trigger them just as Abbie and I were leaping over some stepping stones, so we were nice and wet for the drive home! It seemed to make their day though, so it was worth it.

It’s quite a disorientating place, as you’ll go into a tunnel and come out of a different door with no idea how to get back where you’ve come from, so you feel like you may have missed parts.  For that reason, it’s definitely worth setting aside a full day to explore.

There’s a large cafe next to the gift shop and although we only got coffees, the food looked nice and reasonably priced. There is lots of seating and the outdoor courtyard is really pretty.

If you look on the website, it says advance booking via the website only. When I looked at ticket availability online, the website showed tickets available at 4pm only, yet when we phoned we were able to book to enter at 11am. Satnav takes you to a lovely little village in the midst of the Dales called Reeth, which is a good half hour from where the Forbidden Corner actually is, so it’s worth checking a map before you set off!

All in all, a really quirky, unusual and fun day out at the Forbidden Corner – highly recommended! 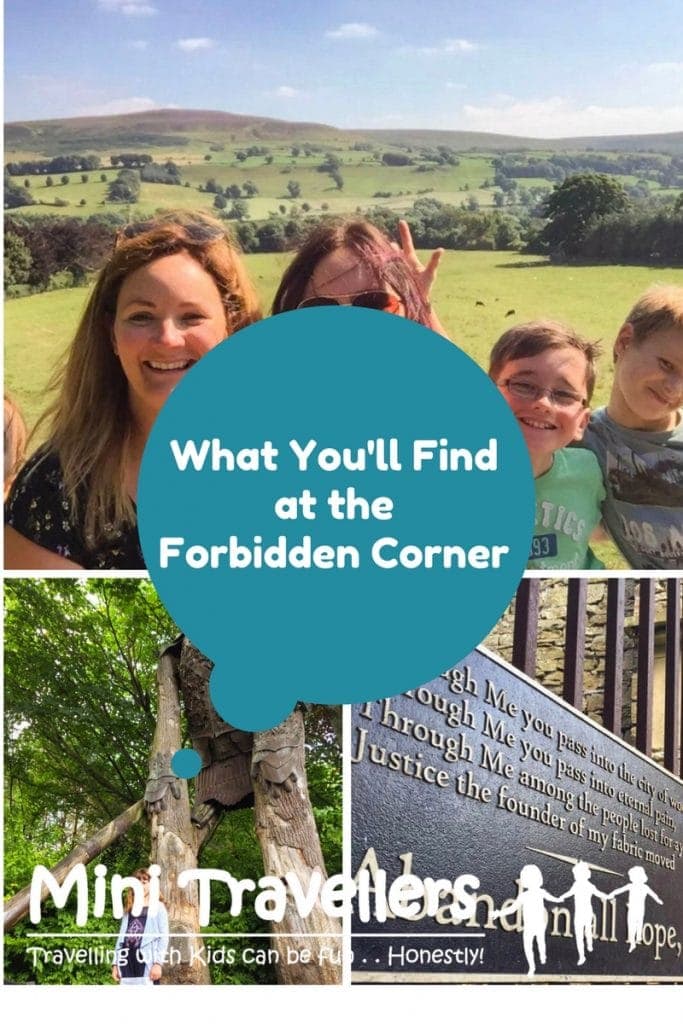