Visiting The Royal Yacht Britannia with children is something of a different visitor attraction.  Our 5 year old son wanted to see the Queen’s toilet (you don’t) and 8 year daughter most looked forward to seeing the Queen’s jewels (locked up in The Tower of London I expect!).  It represents a mixture of recent history and the mystery of the Royal family in a private setting.  So, was a visit to ‘the Queen’s boat’ going to be a disappointment or would it live up to its 5 star attraction rating?

“For over 44 years Britannia served the Royal Family, travelling over one million miles to become the most famous ship in the world. To Her Majesty The Queen, Britannia proved to be the perfect Royal residence for glittering state visits, official receptions, Royal honeymoons and relaxing family holidays. For Great Britain, she was a majestic symbol of the Commonwealth and a proud ambassador. For the Royal Family and dedicated crew of Royal Yachtsmen, she was home.” 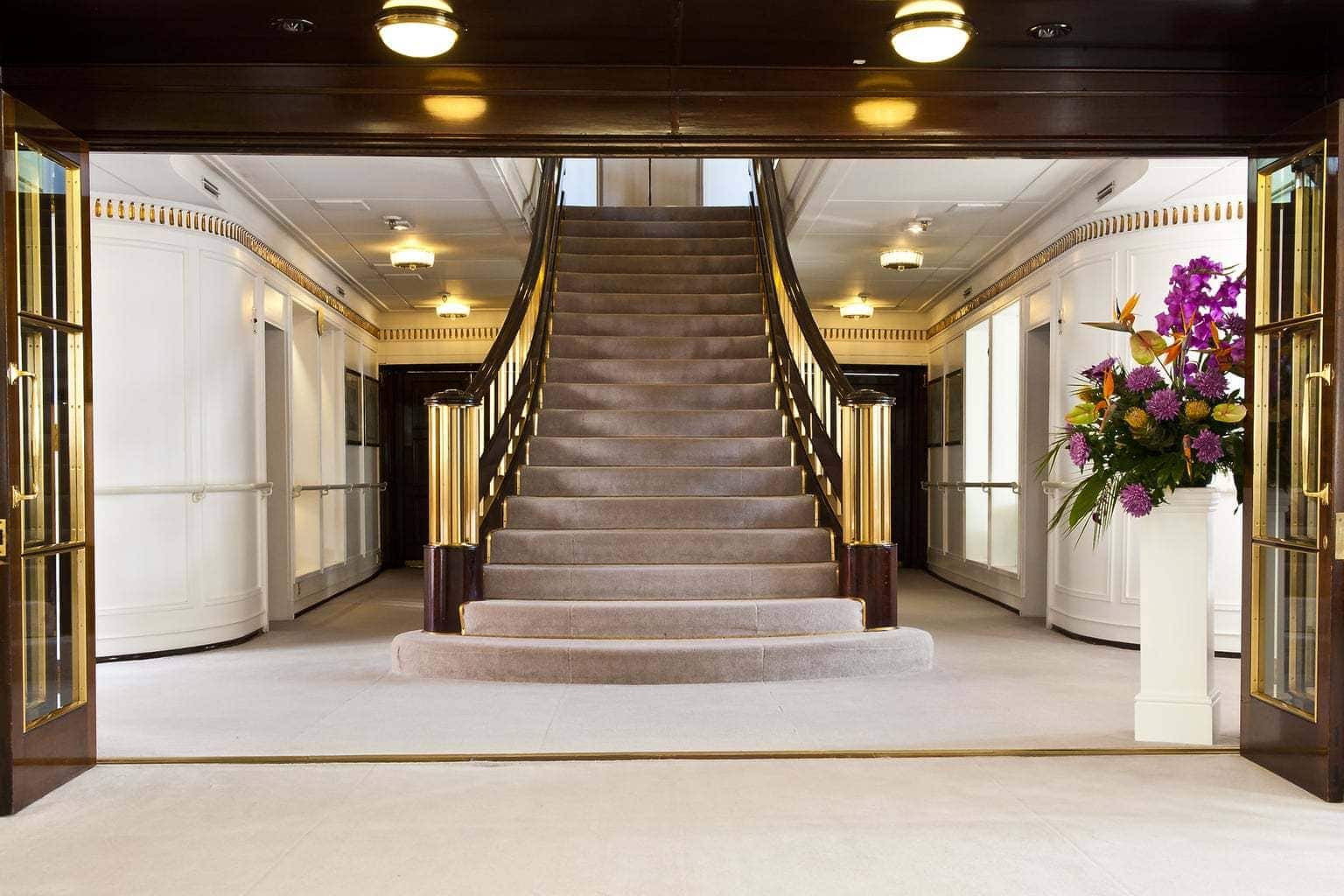 Britannia is berthed at Leith Docks, adjoining a shopping centre (The Ocean Terminal Shopping Centre).  It is easily reached by car (20 minutes from Edinburgh city centre, with free parking) or by bus (numerous public services and various tour bus companies operate from the city centre).  It’s an odd location in all honesty; clearly an area under development.  You enter Britannia via the visitor centre on the second floor of the shopping centre itself.  (We ended up having to purchase a new pair of walking boots for our daughter so surprisingly, the shopping centre location turned out to be a bit of a bonus and saved us from trawling Edinburgh for outdoor clothing shops!).

You purchase your ‘boarding pass’ from Britannia’s space within the centre.  Adult £16, Child (5-17, under 5’s free) £8.50; Family (2 adults, 3 children) £45 – pay once and you can visit free for a year!  You then move on to collect your audio tour.  These are in the shape of a large wand with a keypad, for want of a better description.  There are numbered plaques around Britannia, so you simply punch the relevant number into your handset.  The tour comes in numerous languages and, most importantly for us, there is a separate children’s audio tour.  You then progress to a tower containing a staircase and lifts, which sits alongside Britannia and offers access to each of the Britannia’s floors.  You do not use internal staircases which makes Britannia fully accessible for single pushchairs and wheelchairs.  There are also plenty of places to sit as you move around Britannia.

The tour starts in the wheelhouse on the top deck.  You’ll be distracted for a short time by all the interesting boats docked in the harbour!  As you tour the decks you will hear stories of Britannia’s past, the special role she has played in the history of the Empire and in the hearts of the Royal family.  Children (and adults) will enjoy seeing the Rolls Royce parked in the glass garage on deck, exploring the flags, and playing with the signal lamp (dot dot dot, dash dash dash, dot dot dot…..that’s the limit of my knowledge!).

Once inside Britannia, there is a rather unique feeling that you are in someone’s home.  In reality, you are; Britannia was a floating Royal residence from 1953 until 1997 when she was decommissioned.  The Queen and Prince Philp, we are told, either chose or purchased the furniture and soft furnishings themselves.  I suspect much of it in fact dates back to the 1950’s as it certainly felt in many rooms as though you were visiting elderly grandparents.  Grandparents with good taste and money to spend on quality, but certainly grandparents who did not see any point in replacing their 1950’s furniture when it is still in good working order and serving its purpose!

The first room you enter is the sun room.  Our son was very excited to see that the cabinet full of board games contained several that we had at home.  I was quite impressed with the well-stocked alcohol cabinet.  You then move on to see the Queen’s bedroom (very floral and simple), Prince Philip’s bedroom (the bed looked shorter than his 6ft and only twice his width, it was like a child’s bed!) and one of the guest rooms (containing the only double bed, bought on board for the honeymoon of Prince Charles and Princess Diana).  Clearly there are lots of rooms not on display to the public given that the tour tells us on average 5 tonnes of luggage was taken on a journey and the Queen’s bedroom doesn’t even contain a wardrobe!

If we ever do the tour again, I will be asking for the children’s audio tour.  It seemed to be full of funny antidotes and interesting facts.  Don’t get me wrong, the adult audio tour is informative, personal and very interesting.  However, the children were telling us fantastic stories from their guide.  They really enjoyed following the numbered plaques and undoubtedly had information and stories pitched at their level of understanding and interest.  As an example, in the grand banqueting room, the adult tour gave the history of some of the objects on display (all gifts given to the Queen during trips on Britannia).  The children’s tour told of a tribe who had presented a baby crocodile in a biscuit tin, which had to be kept in the bath of the Queen’s Secretary until it could be offloaded to a suitable location!

Following on from the formal banqueting room is the formal sitting room.  The Queen had wanted an open coal fire(!) but this had not been practical.  A baby grand is bolted in the corner of the room, you are told stories of its famous life, including being played by Noel Coward. 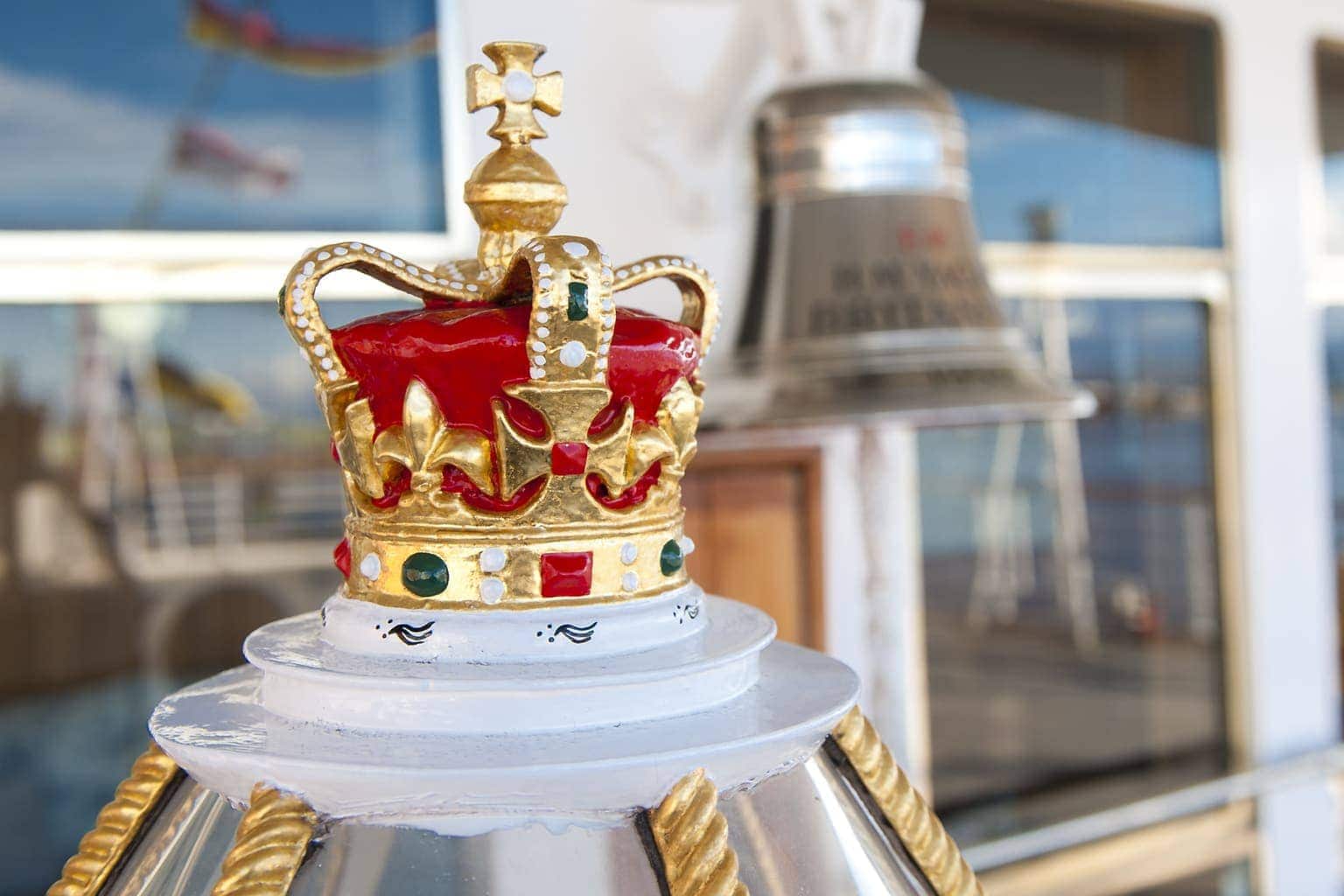 The tour then continues into the dining and sleeping quarters of the most senior crew (even the Captain, an Admiral no less, has the smallest of living quarters, the children could not believe that grownups could sleep in such small beds).  The more junior crew lived effectively in dormitories.  (I would mention the size of the beds, but I think that is turning into a theme of this review, you get the idea, all beds onboard are unfeasibly small!).  For them Britannia was home for months at a time.  The very limited wardrobe space is also a mystery to me as the audio tour advises that each member of the military band carried 26 different uniforms.  I need those TARDIS wardrobes!

The on board facilities included in the tour include the Post Office, the NAAFI (now selling fudge made on board and offering free samples; they didn’t mind my daughter trying several flavours, despite us saying we would not be buying any), the large laundry (a small charge was made for each item, which seems a bit unfair, how else were the crew suppose to clean their clothes without using the service of the laundry?), the kitchens (some still used today) and medical facilities.  The ‘sick bay’ includes a fully operational operating theatre, which the children were very taken with. 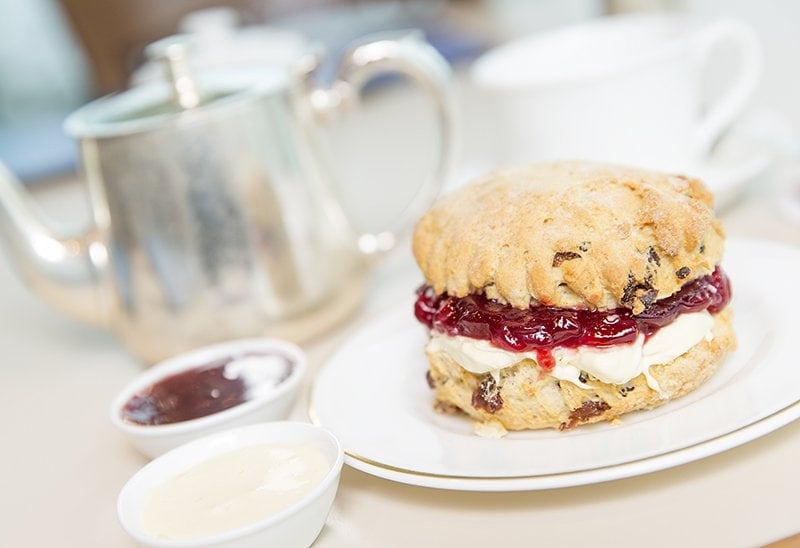 The final stop on the tour of Britannia, were the engine rooms.  My husband particularly enjoyed this, although you are only able to view them from above and behind a glass screen.  I know that he would really have liked to get up close.  I am sure it would be a health and safety nightmare though!

We could have lunched on board, in the Royal Deck Tea Room.  On a weekend break without the children, I had lunch here with my husband.  It was lovely (I might have misappropriated a napkin for my Mum!) but it was not something we thought would suit us on this visit with the children.  So instead we headed into the shopping centre and took advantage of the nice weather by purchasing an M&S picnic style lunch to enjoy by the water. The shopping centre does offer a selection of eateries to cater to most tastes.

I know that there is scepticism about just how much fun a tour of a boat can be.  We had it and I know friends who have felt the same.  However, I can say that us and all those who have done the tour anyway, have been really pleased that they did.  It really is a very enjoyable and informative couple of hours.  It is something quite different too.  Effectively a museum with a history so recent as to make it accessible and relevant.  If I ever decide to buy a boat, I think I’d like one a bit like Britannia……………!

Whilst we were kindly provided with tickets by Visit Scotland and The Royal Yacht Britannia Trust, all views are the writer’s own.

Prices are correct as of March 2018; please check website for up-to-date information www.royalyachtbritannia.co.uk

I like the sound of the children’s audio tour. A baby crocodile in a biscuit tin? It’s certainly a different present!