On the hottest evening of the year my two boys age 5 & 7 and I were invited along to the Liverpool Empire for the opening night of Thriller Live.

Before going to see Thriller Live I had read a few reviews about age suitability but apart from the odd comment about skimpy outfits I couldn’t see anything that would make it unsuitable for my two. As I looked around the auditorium I was surprised to see such a range of ages; I would say mine were the youngest, but I did see other children (although not many) and it went right up to people in their 70’s and 80’s – so truly across the generations.
To position our reason for going; we are attempting to give our boys a bit of a pop musical education and over dinner most Sundays we will pick an artist or band to introduce the boys to … Michael Jackson was obviously an early contender, and the boys quickly fell in love with his music – (they had the albums Bad and Thriller for their respective birthdays last year) so when I saw Thriller Live advertised I knew I had to take them. For me personally, I love some of his songs and have enormous appreciation of his talent, although I wouldn’t say I was a massive fan. The reason for me telling you this is that if you are an MJ purist you will possibly have a different opinion – I was here simply to enjoy the show!
And what a show it was! Not at all what I was expecting. I naively thought it would be a musical about his life but Thriller Live was more like a concert with snippets of facts thrown in. It was cleverly done with five lead vocalist each having their own specialty – which reinforces what an amazing talent Michael Jackson was! All of them were superb, and had the dance moves down to a tee. Britt Quintin and Shaguille Maerice took the ‘lead’ and both had a superb voice with a great ability to get the crowd going. Eddy Lima has to be noted for his performance in Billy Jean – that routine was perfect! It was also delight to see two of them being women, with particular credit to Adriana Louise, again showing the vocal range of Michael Jackson. I should also mention Rory Taylor who is from the Wirral had a tremendous response with the Liverpool crowd.
The dancers were the perfect backdrop or sometimes centre stage to the singing. Almost every song had a costume change and the stage was cleverly surrounded by screens which enabled them to change the mood instantly. Onto the dancing itself – I LOVED this. The routines were brilliant and much to my eldest son’s delight one of them even managed to squeeze in a few ‘floss’ dance moves! 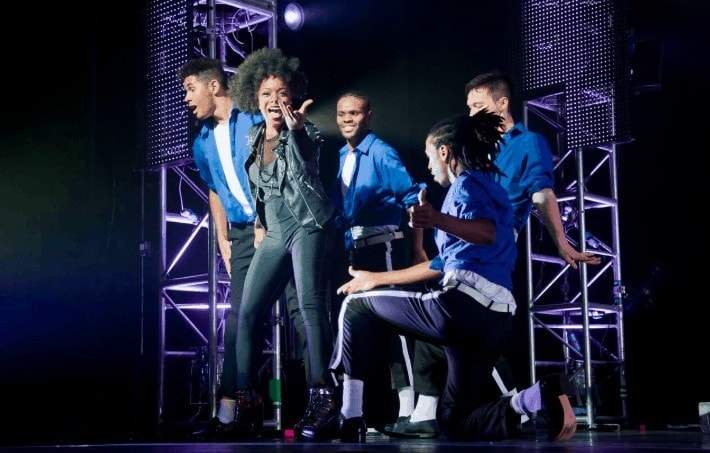 In total we must have enjoyed over 25 hits, with Thriller and Bad being left towards the end. At various points they had the crowd up in their feet, sometimes as an invitation from the state and some people just loved that particular track so much that they just had to get up to dance. Impressive for a boiling hot Tuesday! Our favourites were Rockin’ Robin, Billy Jean and naturally … Thriller! The final song was a mash up of Smooth Criminal and Thriller and had the crowd on their feet and singing back to the stage. It was just superb!
So, would we recommend Thriller Live? If you are a hard core Michael Jackson fan, you might manage to find fault but if, like us, you enjoy his music, have a passion for live music and love a good show this is definitely for you. And in terms of suitability for children, there was one song (Dirty Diana I think it was) in which I thought the dancing was mildly sexualised.  This went over my boys heads, although children a little older they might question it … but you could always take them for a refreshment to avoid it!
The great news is there are still tickets available for Thriller Live (at the time of writing this) including the Saturday matinee and evening performances. If the Tuesday night was anything to go by … Saturday day night will lift the roof off!
http://m.atgtickets.com/shows/thriller-live/liverpool-empire/
We were given tickets complementary but all views are my own.
Click here to cancel reply.