Theatre Review: The Big I Am at the Everyman, Liverpool

Last night I went to watch the The Big I Am at the Everyman Theatre in Liverpool.   Robert Farquhar’s take on Henrik Ibsen’s cumbersome 1867 epic of one man’s extraordinary life is an absolutely incredible production.

I’ve started to type this review a few times today but have stopped every time I started as I’m not quite sure how best to describe what I saw.

The Big I Am was not anything like I was expecting.  From the moment the show begins you can’t take your eyes off the stage. It is loud, it is brash, it takes some strange turns and the music is always a surprise (Ibsen and the Agadoo aren’t an obvious pairing) but it is without doubt an absolutely incredible production.

It starts in 1940s Liverpool rather than 19th-century rural Norway yet follows, fairly closely, the storyline of Ibsen’s 1867 epic.

Peer Gynt is a lad with big dreams.
He’s got his home town in his pocket.
He’s got the whole world at his feet.

Peer Gynt born as the bombs drop in 1940, he’s on a mission to live life his way and have a blast doing it. From the north of England to Vegas to Dubai , the time to make his name is right here, right now.

“I will be a big someone,” announces Nathan McMullen (Peer Gynt) in broad scouse, as he jumps up on his Ma’s kitchen table and start to spin a yarn which his poor old Ma falls for hook line and sinker.  Whilst Peer Gynt is in reality the villain of the piece you can’t help but like the loveable rogue whilst he is portrayed by McMullen.  You route for him right from the off, you even want him to disrupt the wedding of his ex beau which incidentally was itself was one of my favourite acts of the play.  The toilet scene with the sledgehammer; Mother and Father and the drunken groom had everyone roaring with laughter.

As someone who watched the play without any knowledge of the original beforehand I was initially taken aback by the scene change from ordinary, if not hilarious wedding, to a crazy off the wall pub filled with trolls.  In this scene though I did adore Richard Bremmer’s King piece.

When Liam Tobin takes over as Peer after the interval, we are moved from the 70’s to the 80’s and then 90’s and follow Gent on a journey through excesses that end in Vegas and some extreme TV evangelism.

For me Bremmer’s Gynt didn’t flow in the same way as the other two had. The lack of scouse accent perhaps meant the character didn’t seem ‘right’ to me, but looking at some of the other reviews I think I may be alone in this view.

It really is difficult to explain exactly what this play is, but the Big I Am is a real night of theatre and you won’t regret booking tickets. 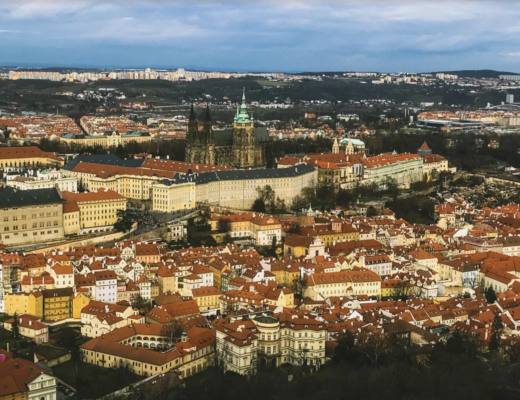 Family Holiday in Prague at Christmas

How to Carry 5 Bikes on a Car!