Get your festive dancing shoes on … a Mini Travellers favourite the Rock ‘n’ Roll Panto is back for Christmas 2018 (this is a no spoilers review!)

Late November our Christmas countdown began (much to the disgruntlement of my husband who would put our Christmas Tree up on Christmas Eve if it was down to him ;-)) with tickets to see The Rock ‘n’ Roll Panto of The Snow Queen at Liverpool’s Everyman Theatre.

For those of you not previously acquainted with a Rock ‘n’ Roll Panto, it is as much of a tradition round these parts as Christmas Jumpers and new PJ’s on Christmas Eve.  It is not your normal pantomime, but I have to be honest, I’m not really sure where to begin in describing it!  Firstly, the music is current (not all this year’s charts, but some are) so you’ll probably know all the songs, the talent on stage is incredible as every member of the cast also plays instruments so when they are not on stage they are up in the ‘orchestra pit’, and I would personally say that the content is aimed more at adults than children (although it is done very subtly so the kids won’t realise) and it is genuinely very funny.

As we sat down, our boys (age 6 and 8) tried to work out the stage, as one side is green and lush with palm trees as you panned to the right it gets colder and colder until it freezes with icicles – it is stunning.  It looked amazing and added to the excitement of trying to guess what might happen.  Whilst waiting for the show to begin, the time was easily passed with games in the programme – something most theatres do now for family events, which I think is a brilliant idea as it builds the anticipation and helps the younger ones begin to understand the story.  I would also like to add at this point, the costumes were spectacular!  The worked perfectly with the story and even my husband was laughing at the rocket costume (I don’t *think* I’ve given anything away there!).

I don’t want to ruin this years performance for anyone going to see it, so I’m just going to say the story isn’t quite your traditional Snow Queen, but does contain a Snow Queen (Viletta, the villain, played by Lucy Thatcher), a dame (Beau Peep Po played by Francis Tucker) and a hero Malakai played by Jamie Noar)/heroine (Laputa played by Nikita Johal).  The cast were simply superb.  Lucy Thatched was a brilliant villain who had an amazing voice and just the right amount of evilness. Francis Tucker and Adam Keast made a brilliant partnership on stage, which was very funny. 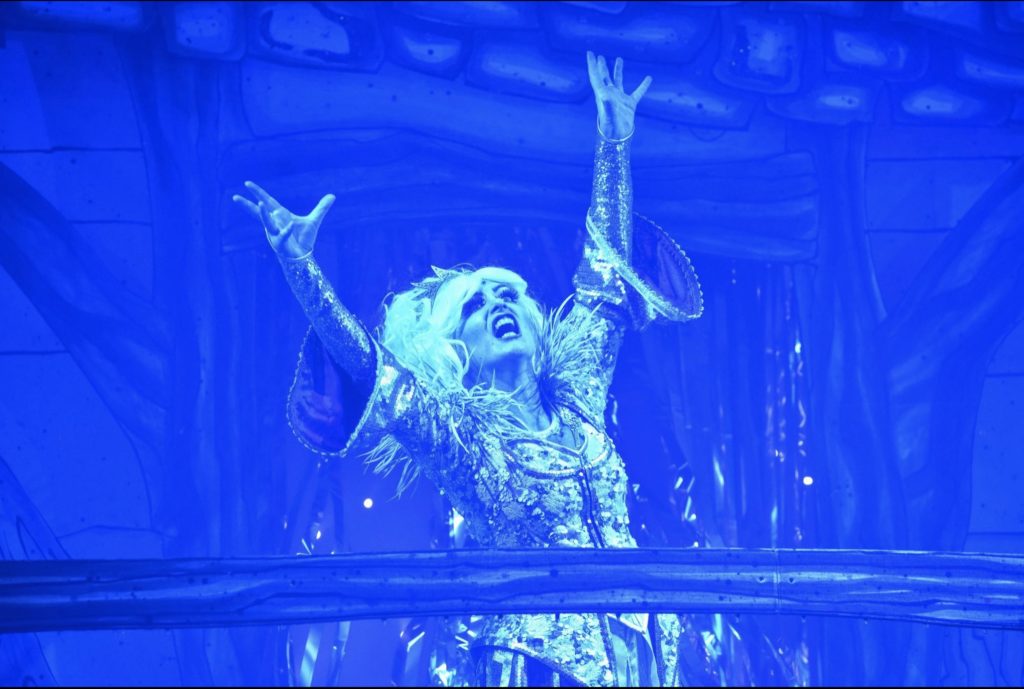 The stage at the Everyman juts out in the centre and as such has three sides to the stage meaning that you feel much closer to the action.  The seats on the sides are hotly fought over as someone from this area always gets ‘selected’ by the dame.  At our performance, the gentleman who was ‘selected’ was brilliant and really got in the spirit of it.  Unfortunately for him, his name was Dick … the Dame’s response was “this [joke] is just going to go on and on all night” and it did!  I think everyone on the stage had some banter with Dick and he took it all with much hilarity.

The thing that most blows you away with this show is the sheer talent of every member of the cast.  They never stop, either on stage or playing instruments, they work incredibly hard.  One person was playing the keyboard and then grabbed a trumpet with his left hand and started playing that at the same time!  Viletta did a flute solo on stage, in between playing the keyboard.  Lloyd Gorman who played Hench was also amazing to watch, particularly on the electric guitar.

One of the things I love about the Rock ‘n’ Roll Panto is the interaction with the audience.  For me, one of the funniest moments was when the Viletta started coming down the stairs in a dramatic way, and was heckled from a boy in the audience saying “that was a bit dramatic”, she retorted with “you think that was dramatic … you should see my next line”.  She then got the giggles and had to compose herself to deliver it – it was hysterical.

The other great thing is that they absolutely get you up on your feet, my eldest at the age of 8 initially thought he was too cool to do this, but even he joined in!  I could go on and on, but really it’s just easier if you go and see it yourself.  This amazing show is on until 19 January, click here for more information and tickets.

NB: we were given complementary tickets to see the show, and I only got the chance because Mrs Mini Travellers had already booked tickets for 23rd December as she loves it so much.  Views are all my own.