The Lovely Bones, one of the best-selling novels of the 21st century is brought to life on stage this week at The Everyman Theatre in Liverpool.

Adapted for the stage by Bryony Lavery from Alice Sebold’s amazing story that stopped most of us in our tracks when it was published (16 years ago) in 2002.  It opened at Royal & Derngate, Northampton on 1 September 2018 before transferring to the Everyman Liverpool, and going onto the Northern Stage, Newcastle, Birmingham Repertory Theatre and The New Wolsey Theatre, Ipswich.

The Lovely Bones captured my heart back in 2002. It became one of those books that stayed with me long after I put it down. It was a book that for me spoke of issues in a way I hadn’t heard them before, a real game changer in literature and accessibility to literature of that type. For me it was no surprise that The Lovely Bones went on to achieve critical acclaim and became an international best-seller.

But back to the play that I watched this week. We debated before we went in as to how they were going to represent the tale that we recalled of Susie trying desperately to help her family cope with their grief from he place in heaven. Would she be up high? Behind a screen? Simply projected onto a screen? We couldn’t quite work out how it was going to work. 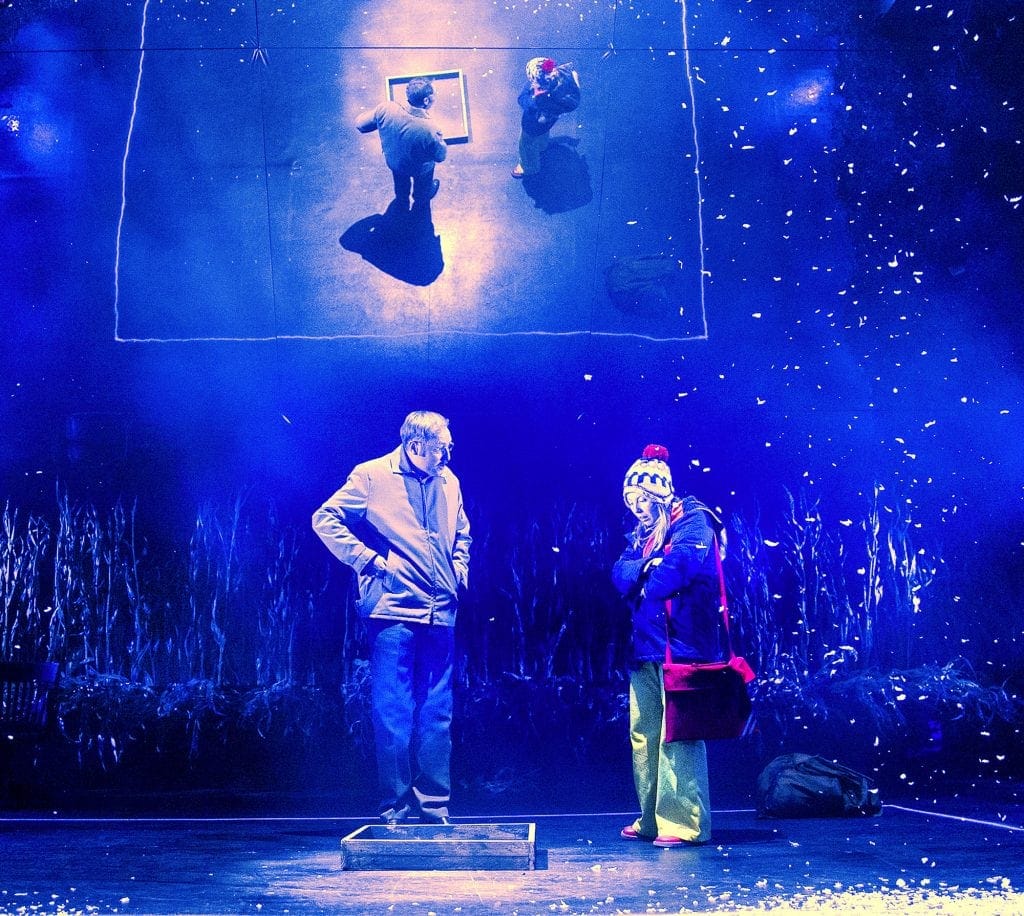 So when we arrived into the theatre to be met with a vast tilted mirror that took up a significant part of the stage we knew it was going to be a fascinating re-telling.

If you don’ t recall the story. The Lovely Bones tells the story of young Susie Salmon, who is just like any other girl. She wants to be beautiful, adores her charm bracelet and has a crush on a boy from school. There’s one big difference though – Susie is dead. Raped and murdered in the corn fields next to her house. Susie can only observe while her family cope with their grief in their different ways. Her father, Jack, is obsessed with identifying the killer. Her mother, Abigail, is desperate to create a different life for herself. And her sister, Lindsay, is discovering the opposite sex with experiences that Susie will never know. Susie is desperate to help them and there might be a way of reaching them.

Susie Salmon played by Charlotte Beaumont, was excellent. I mean really excellent. Her portrayal of her frustration at not being able to reach those she loved tugged at your heart. The play opened with a bang (literally) and continued at pace. There were scenes I wasn’t as keen on, like sadly the closing scene with the dogs (I didn’t quite feel that) but others that I loved. The dresses used to portray the other victims was wonderfully done. Susie’s actual rape and murder was chilling, and the breaking of the snow globe and the glass shards exceptional.

Granted it wasn’t an uplifting evening of theatre but it was thought provoking and incredibly emotional like the original book.

Advisory age is 11+ but for me it would be significantly older than that.  The themes explored and the complicated relationship messages it evokes are tough enough for this 40 year old woman.

If you can book tickets, please do.  You’ll not regret it.

NB: We received tickets in order to review but all views and opinions are my own.