There is no such thing as a Gruffalo…. well I can tell you there is, I saw him!

Having now become fans of children’s theatre we jumped at the chance of taking Hugh to see the Gruffalo Live. From a very young age we have read the book to him and he now enjoys ‘reading’ it with us so the pressure was on for this show to live up to our 3 year olds dream.

Feeling like we had cracked travelling to London with a child, we excitedly packed up and headed out early. Hugh jumped onto the train with his Gruffalo in hand and avidly told everyone who asked that he was ‘off to find the Gruffalo’. His confidence on the tube had hit a high as he stood swinging round the posts, a scene not far off from my post work drinks commute! Whilst Daddy ran to Bond St to do his last minute Christmas shopping for Mummy… Hugh and I arrived safely at the Vaudeville Theatre.

As the pavement was cluttered with excited children and coffee clasping parents, it was obvious that this one was going to be popular. Having learnt last time (watching The Tiger Who Came to Tea) that taking your seats too early can lead to bored toddlers, we grabbed our tickets and headed back out to grab a snack. Having refuelled we took our seats and settled in ready for the show. Disappointingly like with the Lyric Theatre they once again lacked booster seats. Luckily we had figured out last time that our backpack made for a great booster for Hugh. Another slightly annoying aspect was the fact the buggy park was upstairs – an slightly unusual decision you would think.

The lights went out and the ‘oooohhhhs’ from the audience revealed our excitement. The set was wonderfully decorated with scenery just like the book, a great start. Out came the 3 main characters, friendly faced actors and actresses who instantly appealed to the young audience. The story was told through verse and rhyme, with some narrative coming directly from the book. The costumes allowed the characters to look human but clearly defined who they were meant to be. Hugh was in awe… he sat with a permanent smile on his face! He joined in with the songs and ended their sentences as he does at home, what a truly wonderful thing to watch as a parent. What made it even more special was the references to Christmas, a way to acknowledge the festive season and the arrival of the big man himself was imminent. It felt like every show was a ‘one off’. 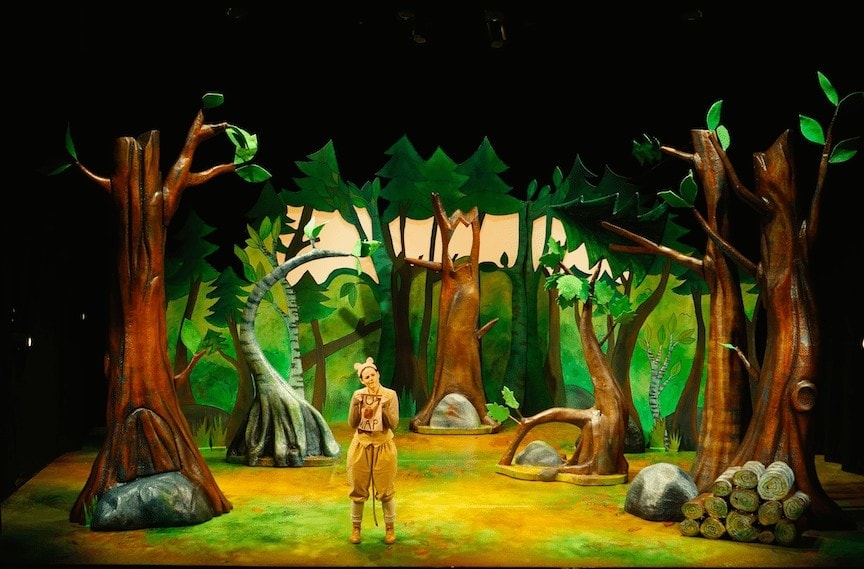 As the story progressed the anticipation increased… what would the Gruffalo look like? Well out he came, and guess what…. ‘He has terrible tusks, and terrible claws, and terrible teeth in his terrible jaws’… you got it! He was perfect, a non-scary, soft but effective Gruffalo. Hugh’s eyes lit up… there he was as ‘real’ as can be the character he has read about all those times. Without doubt his excitement came to a peak when the Gruffalo leapt into the audience and landed right in front of us, I thought Hugh was going to burst! As he frolicked amongst the audience and cuddled a few Daddies the children went wild, a real crowd pleaser. 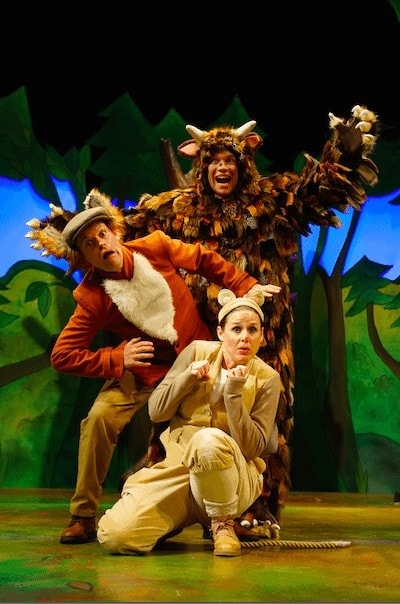 As it came to end I worried we would have the Gruffalo deflation… but this was recovered by a £4 Gruffalo flag to add to our collection. As we made our way home proudly brandishing our Gruffalo flag Hugh now told all and sundry that he had found the Gruffalo!

The Gruffalo is now on at The Lyric Theatre

NB: We received tickets to attend The Gruffalo but all views and opinions are our own.

This sounds like a perfect show for a little one. It's lovely watching their faces when they are enthralled by a show. Magical!!