This time round we were much better prepared with our new trailer tent and 5 lion costumes so we could get fully involved in the Tribal Tournament. We have three children: boys aged 5 and 3 and a girl who will be 2 next month. Our eldest remembered the festival clearly from the year before and he was particularly excited in the run up to going.

Ten tips for Just So Festival:

1. Pack loads of clothes for the kids

Pack more than you think you need. In weather like we had they are constantly too muddy or too wet, too hot or too cold. Thin layers and waterproofs worked best for us.

If you have a child in a pram then try to bring one with huge off-road wheels! The footpath up to the festival is quite rocky and there are a number of little hills on the site. There are also uneven footpaths with things that snag on the wheels in the wooded bits and some downright boggy patches about when it rains hard. Some people opt for festival carts which look lovely and can hold more than one child and your picnic etc.

This tip is not only for picnics but for sitting on to watch shows. We love the Rubbastuff ones as they are really light and easy to carry around!

Not only do fairy lights look pretty draped around your temporary home but our solar powered ones came on automatically after dark and lit up the trailer tent nicely so we could see where it was!

Each one of ours had a different colour little torch so we could identify them more easily in the dark. It also helped them to see where they were going and as a bonus we could hang the torches inside the paper lantern instead of lighting the candle, which we felt was much safer when being carried by a child.

As good as the food on offer inside the festival is, it is nevertheless quite pricey for a family to get a meal. We also found the break of going back to the trailer tent for food was good for our kids as it allowed them to have a proper rest.

Wellies are obvious. Flip flops are essential to wear in the shower as the floors of the cubicles soon became wet, muddy and full of bits of grass! Incidentally the showers were lovely and warm this year.

Get involved because it’s fun and a great way of striking up conversation with others. You don’t have to be an animal – be a pirate, or a fairy or simply put on your boho frock and wear flowers in your hair.

Highlight your programme with things you want to see and do (and when they are repeated incase you miss them first time round). And remember to bring it with you each time you go into the festival.

it’s a festival for them after all so everything is suitable for young ears and eyes. Soak it up and indulge them. And yes we did deal with tantrums from each of ours in turn, but it was worth it. 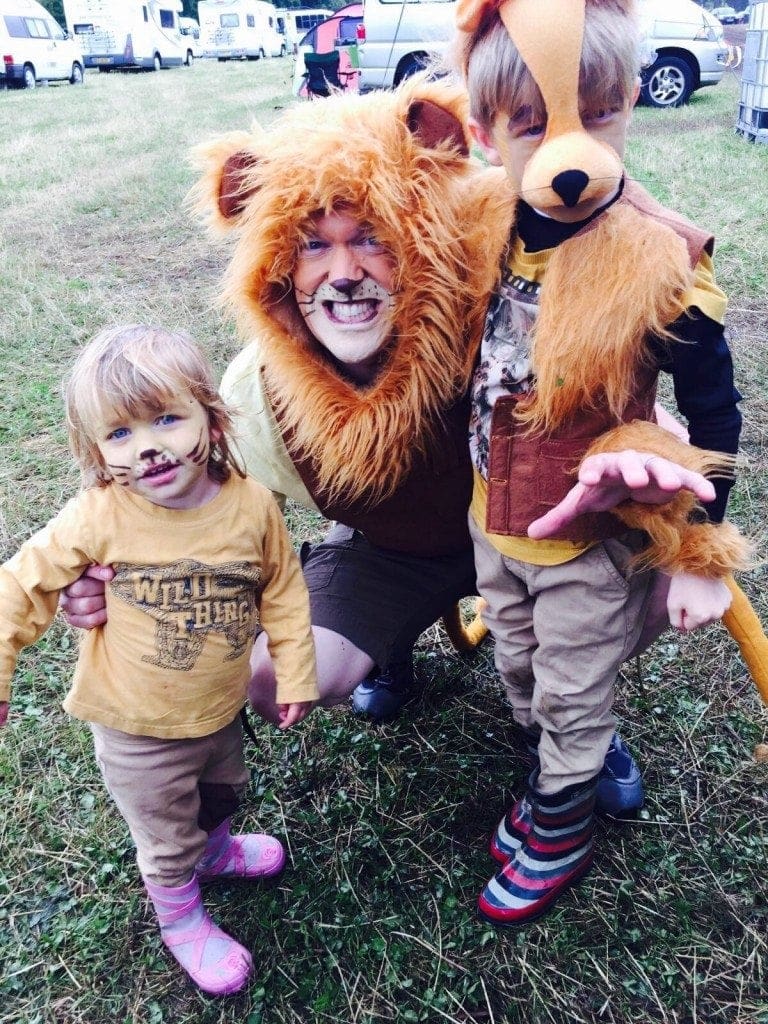 So what did we do at Just So Festival?

The opening day of the festival eventually arrived and we headed off, packed up the hilt, including the roof box, to Rode Hall bubbling with anticipation. The gates opened at 12pm and being as punctual as ever we arrived at 1pm. This was actually really good as we didn’t have to queue at all and still got a great pitch on the campervan field (also for trailer tents and caravans and all manner of funky converted transit vans and minibuses!)

We spent the next couple of hours setting up and refuelling and unable to contain the children’s excitement any longer we made our way to the magical suitcase archway that signifies the entrance to the festival. Again the fairy dust sprinkled down on us all (and a little bit of rain!) and whisked us off to the magical world of Just So Festival. The kids skipped, hopped and danced about while we took in the sights and sounds of this spectacle of art, energy and creativity. 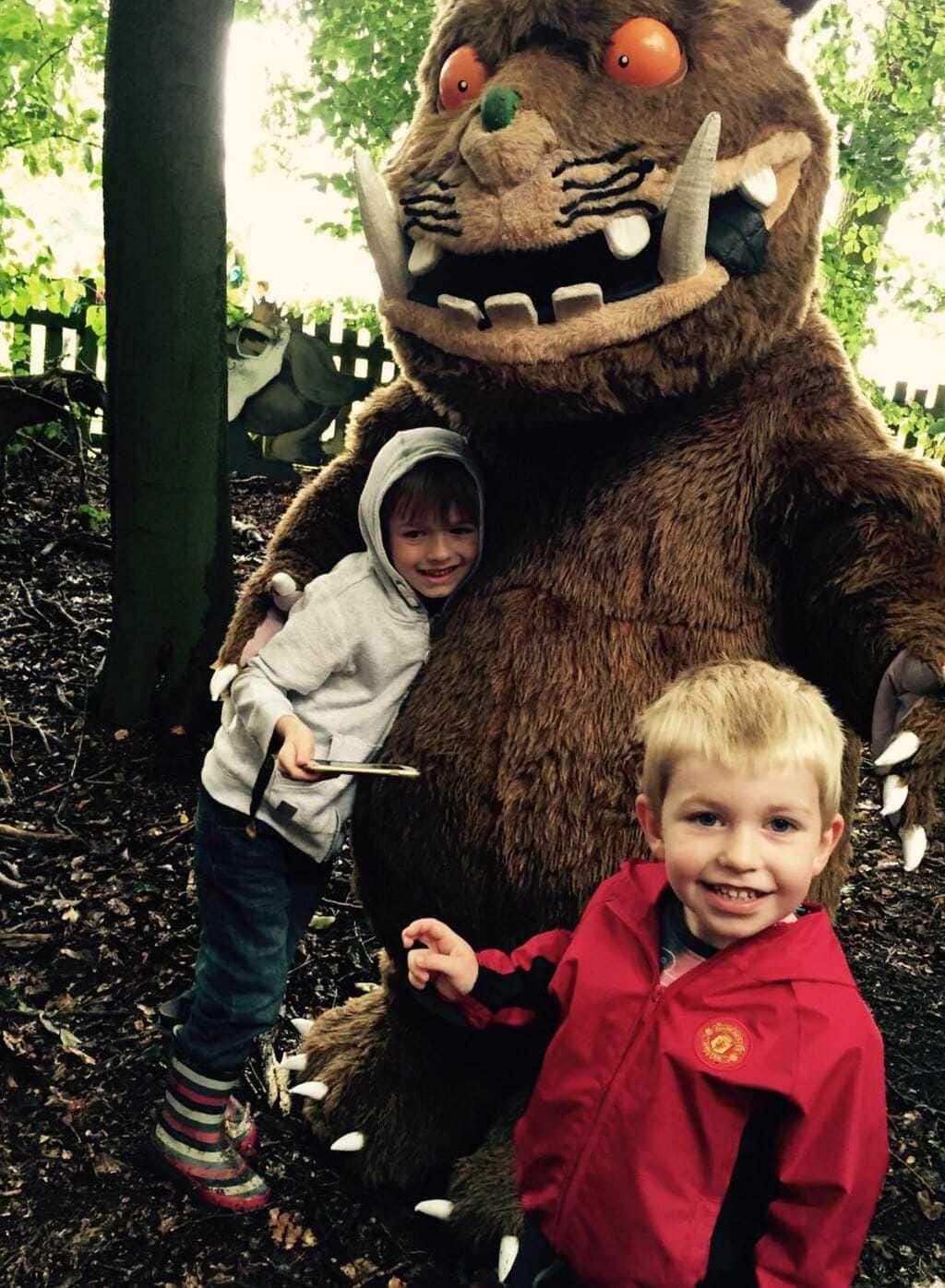 The first area we visited was the the Spellbound Forest – our favourite place from last year. The kids watched in awe of the performers around the campfire, they learned about how bees make honey, toasted marshmallows on an open fire, made music on pots and pans and even met the gruffalo! Unfortunately the weather all weekend was not favourable but it didn’t dampen the spirits of the staff, performers or the visitors; everyone was positive, friendly and determined to have a great time. 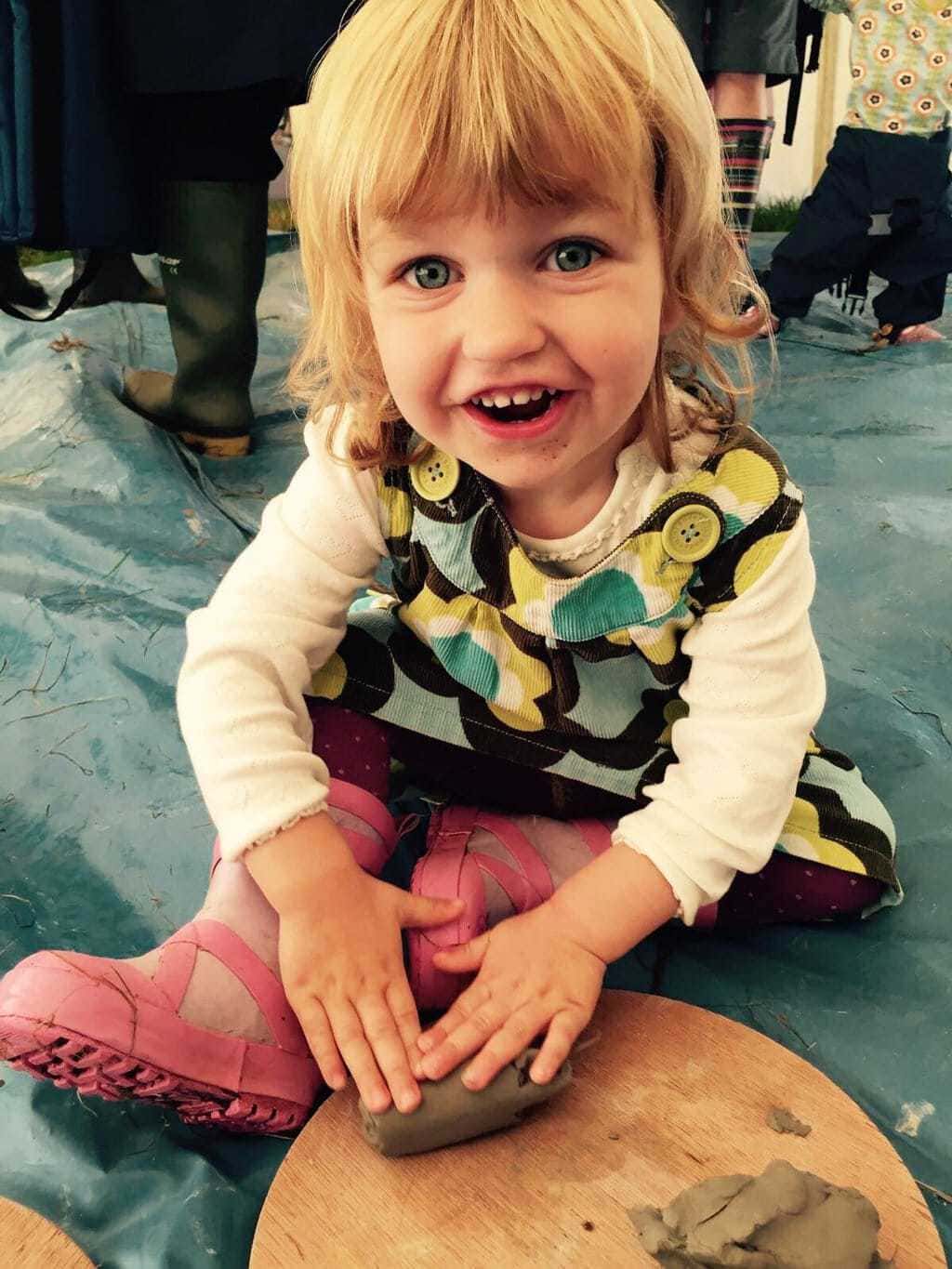 Next we explored the Peekaboo area, designed specifically for babies, and our little girl particularly loved playing with clay in the Clay Babies tent. We also visited the Weleda tent and were delighted to be given some samples of products to try. Weleda make a fab range of products for all ages but after trying a few of them out our firm favourites are the Skin Food moisturising balm for mum, the Calendula Shampoo and Body Wash for babies and the Calendula Nappy Cream.

After a couple of hours we went back to the trailer tent for dinner and to change into our lion costumes. On entering the festival again we were swooped upon by a group of ladies who cooed over our outfits and insisted on giving us a handful of golden stones. We were a little baffled at first but then it clicked that this is what we needed to collect and hand in order to gain more points on the scoreboard for the lion tribe. You could chose to belong to the fish, frogs, stags, owls or foxes if you preferred. You don’t even have to make up your mind before hand unless you want to make or buy a costume. We saw some families that represented two or three different tribes and shared out their pebbles evenly between them. We also learned very quickly that if you ask staff members for golden pebbles you got more, although you had to be prepared to complete a challenge such as singing a song, acting like your animal or telling a joke. Collecting this treasure was one of our boys favourite things to do all weekend. 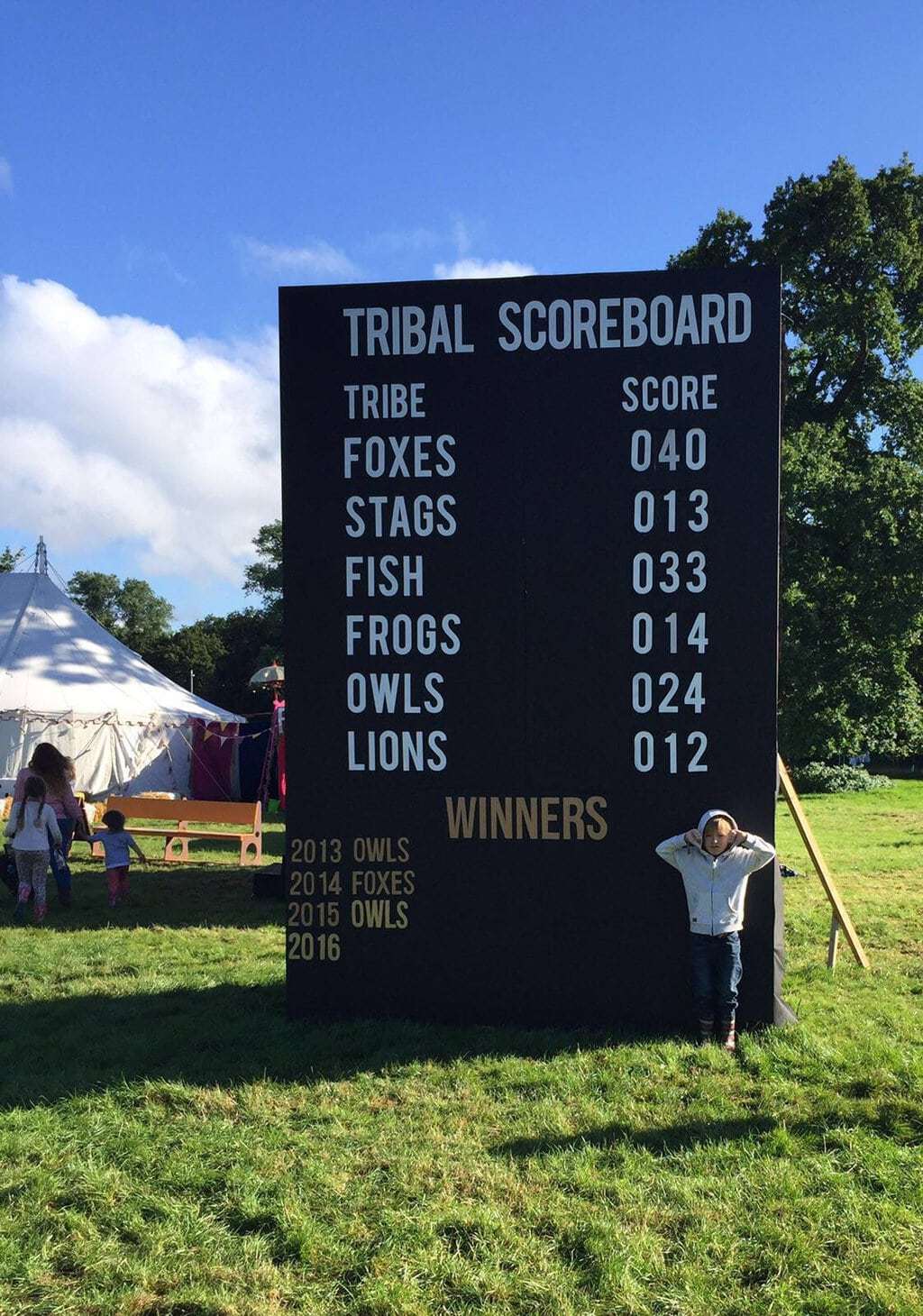 We stayed until around 9pm mainly watching the bands in the Footlights area and eating delicious hot chips from the fish and chip van. There is a good selection of food outlets on site so you don’t need to bring food, but again if you want to take a picnic that’s perfectly fine too. 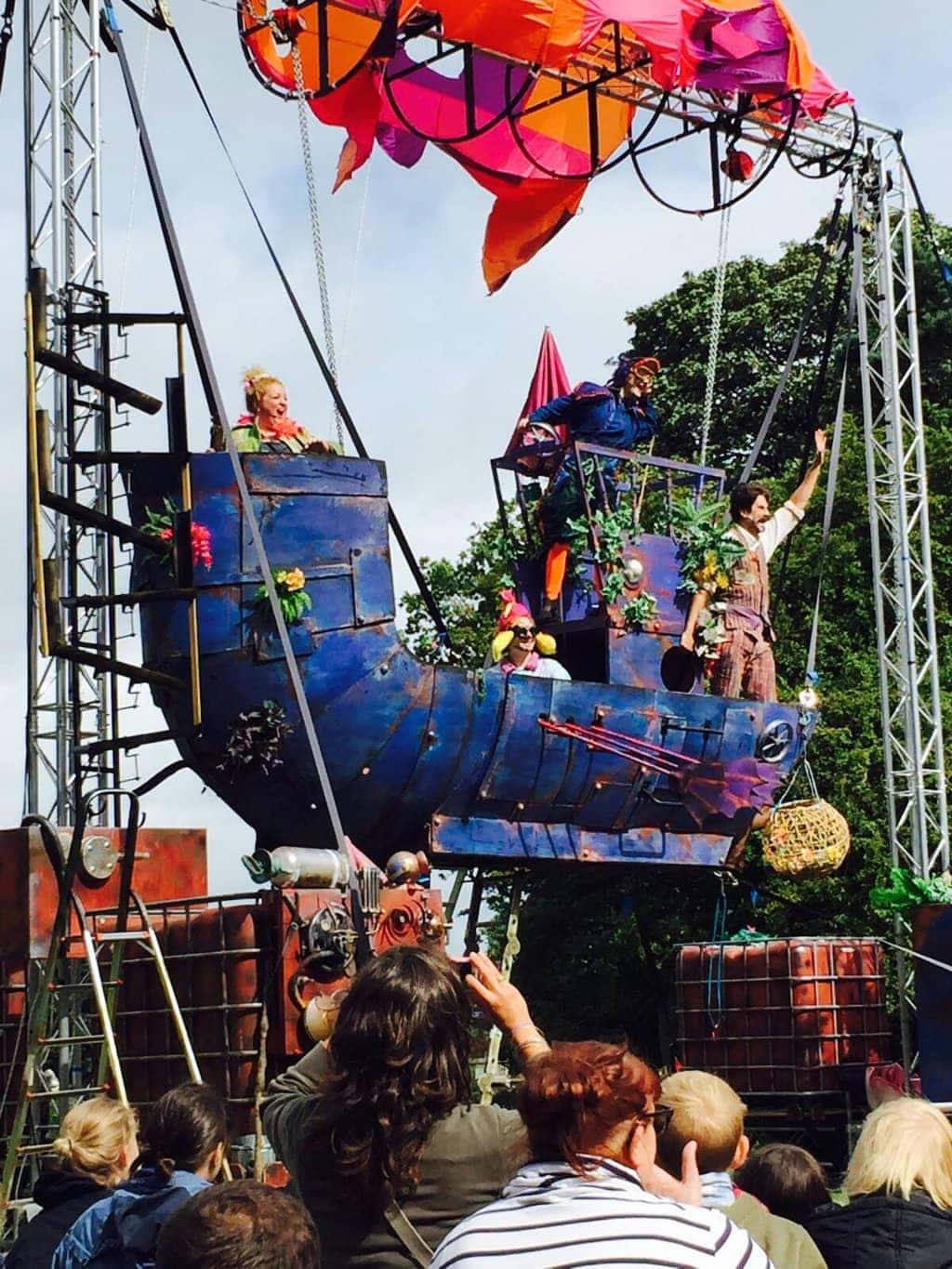 On day 2 we tried our hand at circus skills and watched the brilliant Les Enfants Terribles perform their show entitled “The Fantastical Flying Exploratory Laboratory,” which had our kids hooked the whole way through. There are so many different shows, performers and storytellers on throughout the weekend, often performing a number of times so you have more than one opportunity to see them. After that we headed down to The High Seas area and made a paper lantern in preparation for the lantern parade later on. This was the most difficult part of the day for us as the task was too hard to complete for our youngsters and the tents were crowded as it was so popular. We decided I should finish the lantern on my own without distraction while hubby grabbed a pint of cold beer at the bar and supervised the kids playing in the sand pit – everyone was happy! 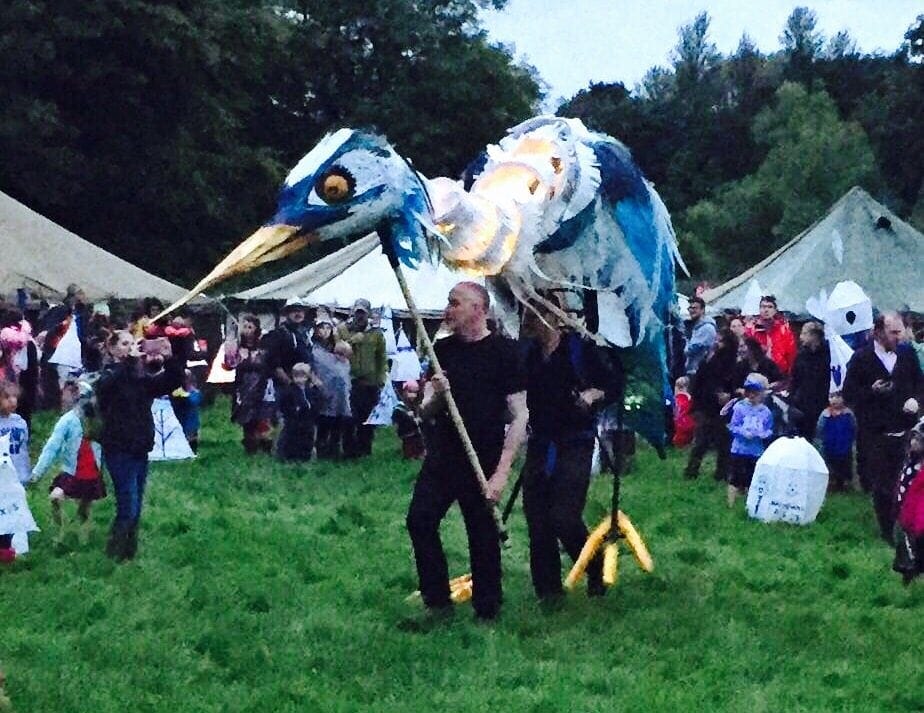 The lantern parade ended up being our highlight of the weekend as we joined the procession of a thousand, probably many more, people winding their way through the trees from the High Seas area back up to the Village Green area. This was not a long walk and it was absolutely beautiful to watch the long line of handmade lanterns bob along in the dark.

Sadly we had to leave on the Sunday as hubby was due back at work and we couldn’t take part in the Tribal Games or the huge pillow fight which are very popular with visitors but by then we had done all the other activities we wanted to do (many more than I can list on here) and created so many more special memories as a family. All that was left for us to do was to find out who was the winning tribe? Luckily the folks at Just So are good at updating their Twitter and Facebook and we found out later that day that the Fish had swum their way to victory. Never mind Lions, there’s always next year! 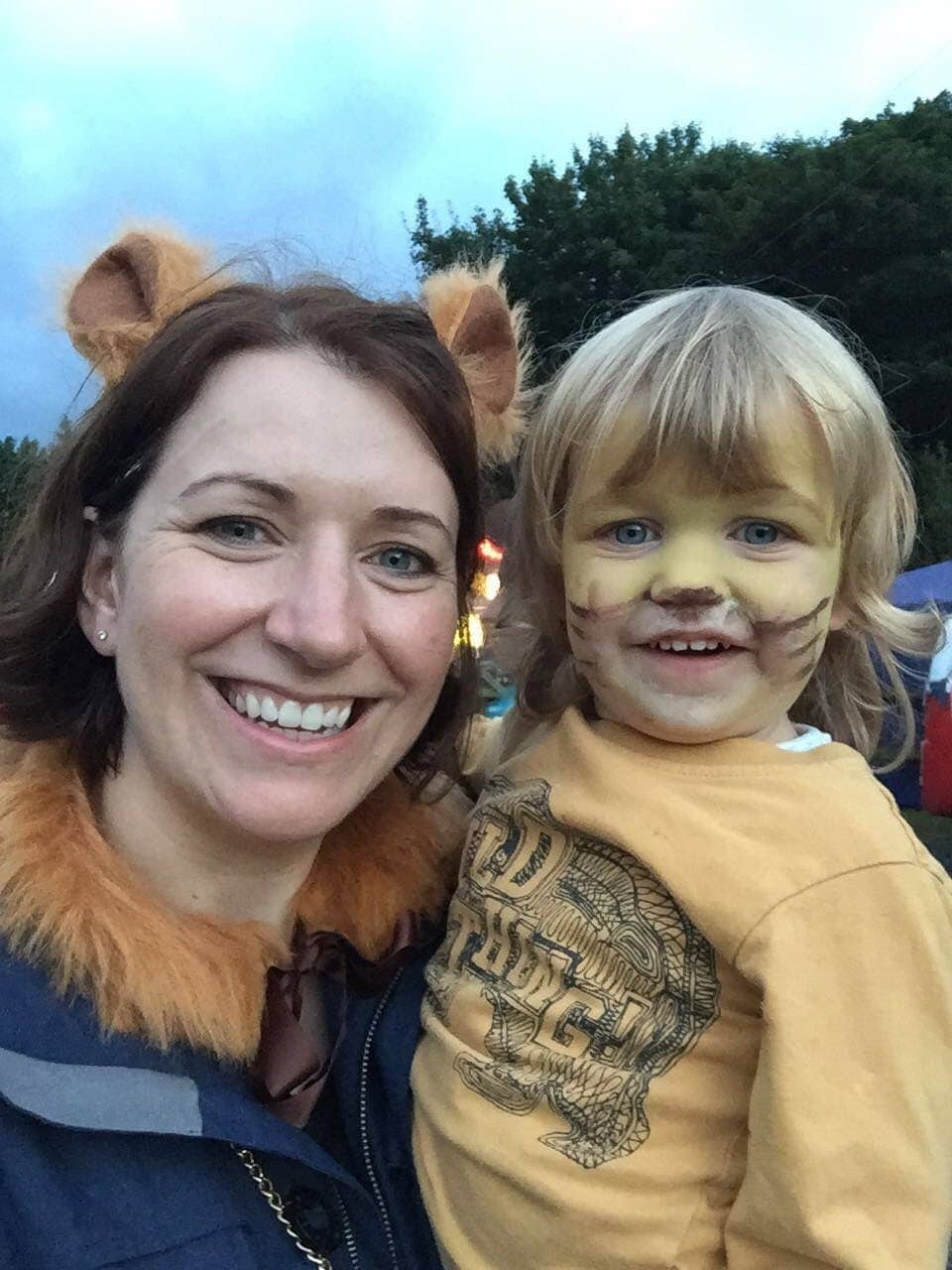 WHY NOT PIN THIS Ten Top Tips for Just So Festival 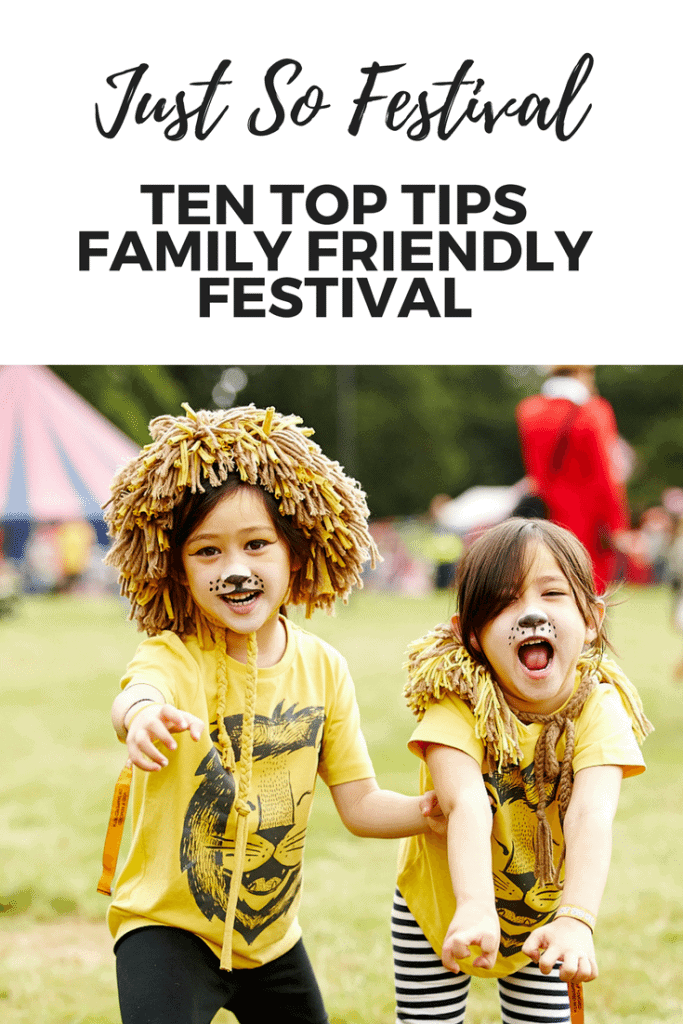 Nb: Emma and her family received complimentary entry into Just So Festival but all views and opinions are her own.

Sounds like a fab festival and a great one for newbie families to start the festival circuit. Our top tip is to take those mini cereal packets - the kids just love pouring milk into their own little pack and no washing up!!

Fab tips - I adore the lion costumes! We didn't take any food this year which was a bit of a rookie error - I didn't find the food too expensive though so I would recommend taking your own brekkie and lunch and then eating at the festival in the evening.

The pillow fight was EPIC! It sucks when work gets in the way x

This sounds such a great thing to do, and something ALL the family can get involved in. Loved the costumes.