There was a teacher training day today, so the kids were off pre-school and we decided to make the most of it by heading over to Speke Hall with our next door neighbours. They are National Trust members so it was a ‘free’ day out for them, and we have been thinking about re-joining for a while.  Even if I hadn’t decided to, it would have only been £10 for me to do the house and the gardens and free for all the Under 5’s.

I had been to Speke Hall once before, and had spent a long time in the house on the guided tour. It’s really good and I had really enjoyed it so I was a bit worried about going and not being able to visit the house and listen to the tour (that sort of thing not being great with 5 mini travellers in toe). I needn’t have worried, there was absolutely loads for the kids to do and we had a really lovely day. 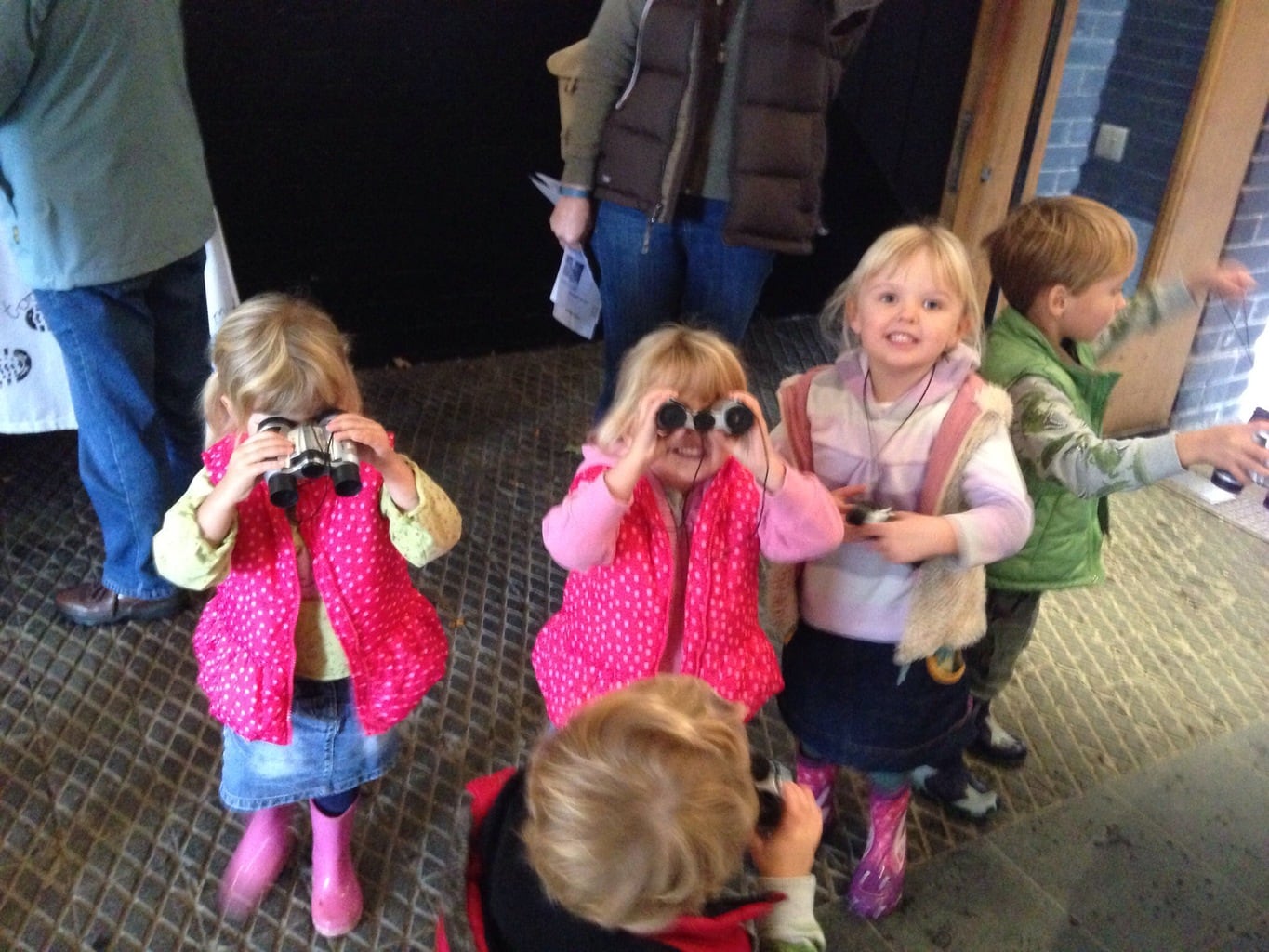 We arrived and the ladies on reception were lovely to the kids, they gave them a set of binoculars each and encouraged them when they asked them if they could see the Prince and Princesses bedrooms.  We persuaded the mini travellers to go for a walk first and we set off on the Autumn Colours Walk. We chose it as it was only 40 minutes, and the birthday boy in our party wanted to try that one. Is there a better reason! The map and directions weren’t great but we did end up having a really lovely walk so it didn’t matter at all. 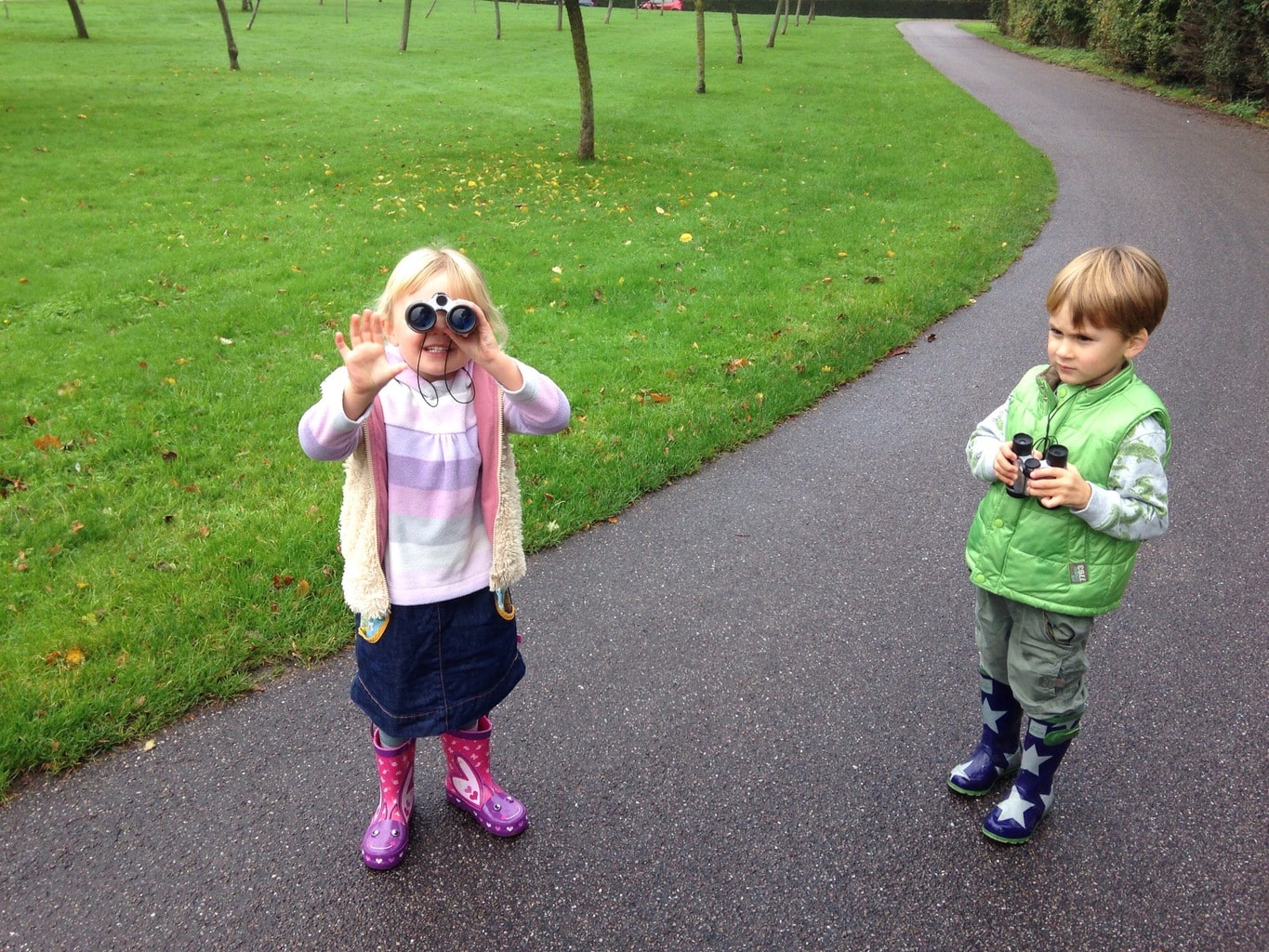 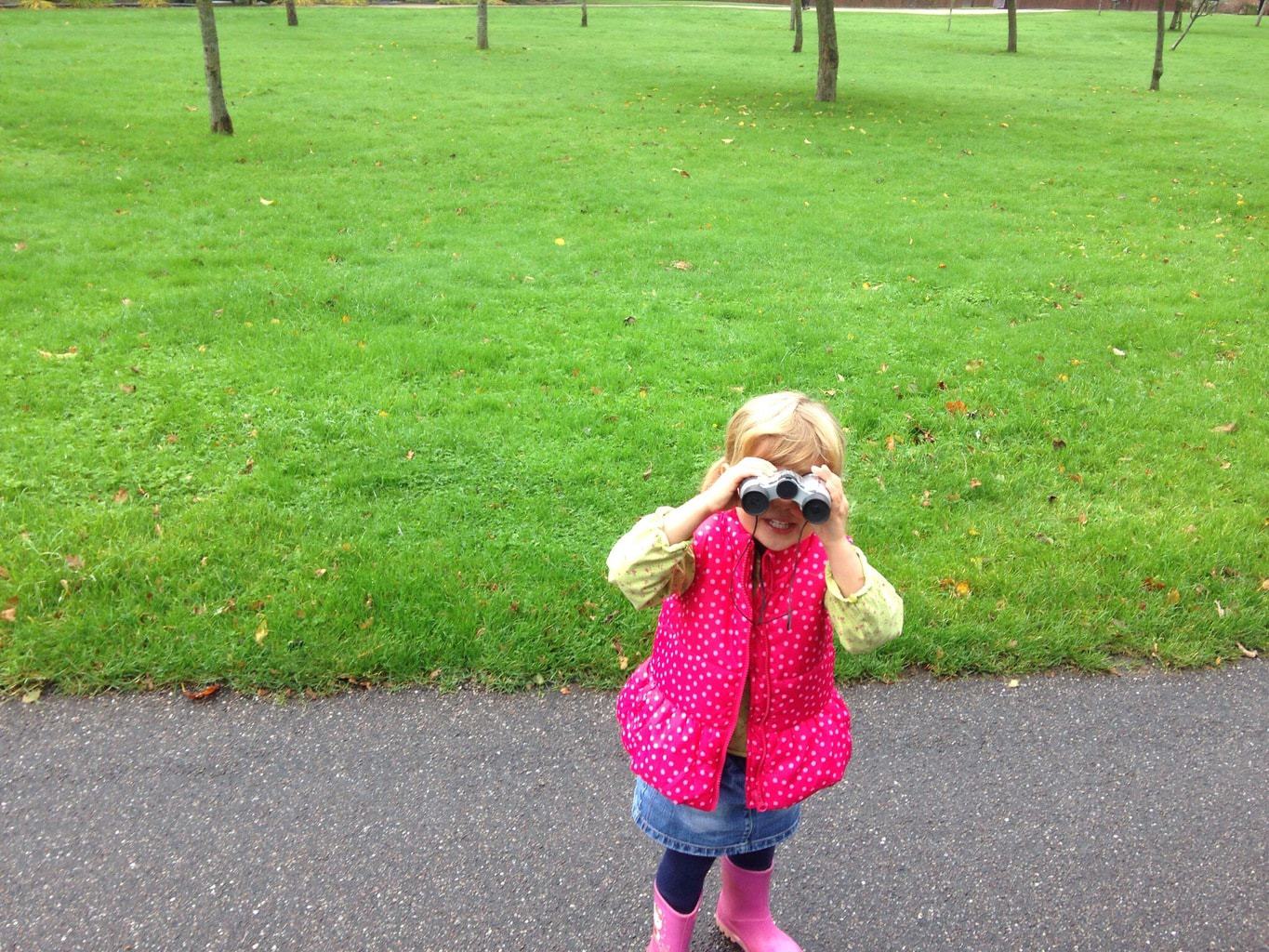 The walk led us through the formal gardens and into the woods behind the hall.  There were so many Autumn leaves and we spent ages jumping around in them and kicking them about. We tried to see who could find the best golden leaf, but that all went by the way side when we found the little houses dens and zip wire (hidden*) in the woods. 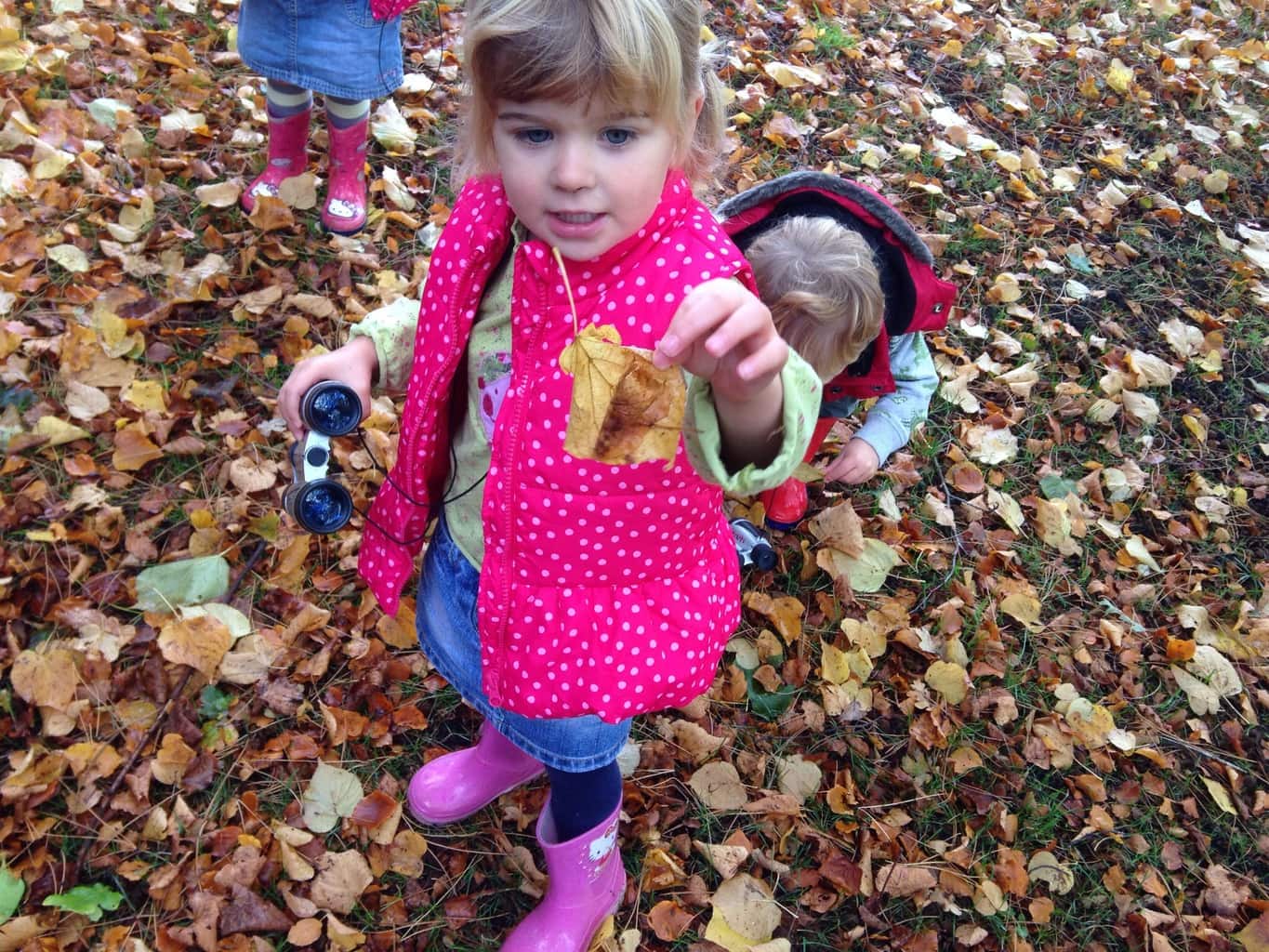 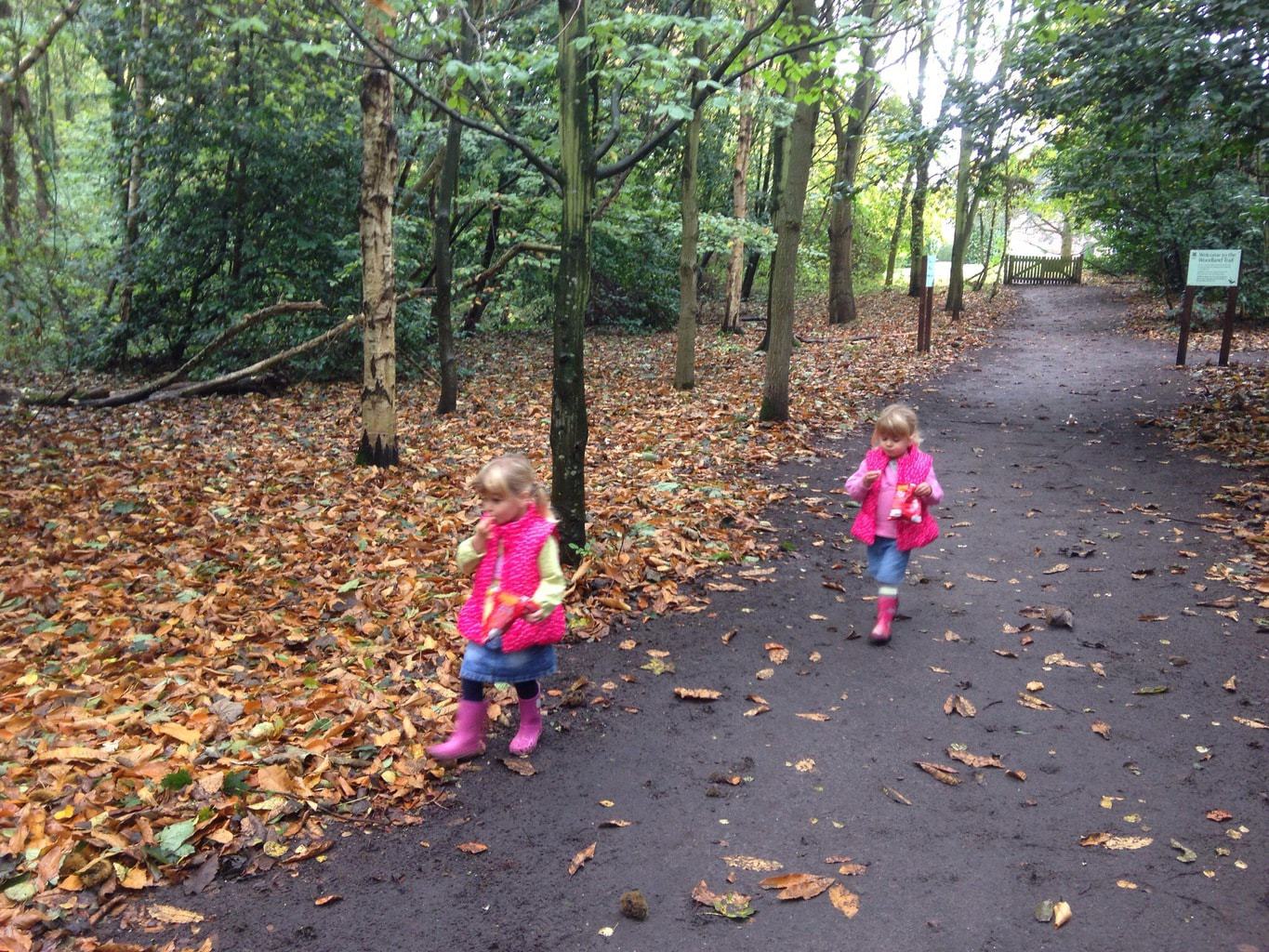 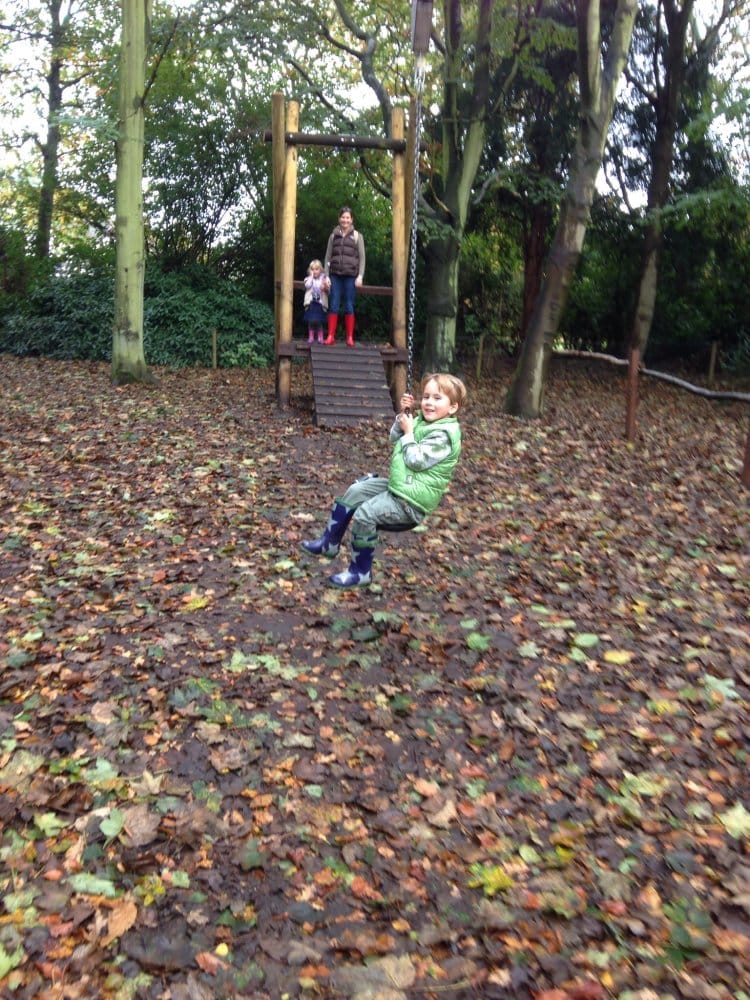 We had been at Speke Hall an hour and a half already by that point, and as it doesn’t open until 11 we were glad we had taken a picnic for the kids as they ate it as we were wandering around. We did however notice that the cafe did a kids lunch for £3.55 which seemed like quite a good price.

After the walk in the woods we followed the walk back past the house, through the sandstone tunnel to the playground. 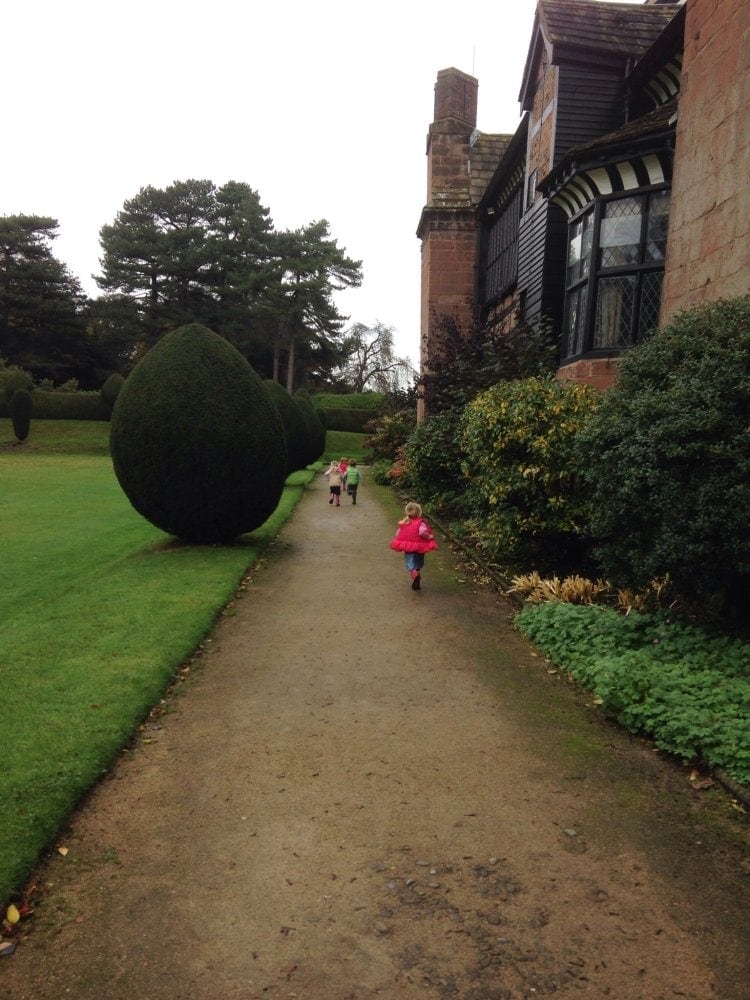 The kids played happily for a time whilst we ate our lunch. We hadn’t taken lunch for ourselves in case we needed to eat inside the cafe due to the weather. Instead we sat outside watching the kids play on the slides and roundabout with the bigger kids.  Lunch was quite expensive I thought, £4 for soup is pretty pricey, but it all tasted nice so not too many complaints.

After lunch we decided to go round the house. We decided not to do a formal tour as we thought the kids would get round much quicker, and also didn’t want to disturb the other guests.  Again the volunteers in the house were really kind to our 5 children and engaged them in conversations about what they wanted to see, and who might have slept in all the bedrooms.

There was a couple of activities going on in the house, and the older children were completing a tick list of things they had found. We didn’t complete that, but we made some poppies and they loved dressing up in the old dairy. This was probably the highlight of the kids trip round the house! 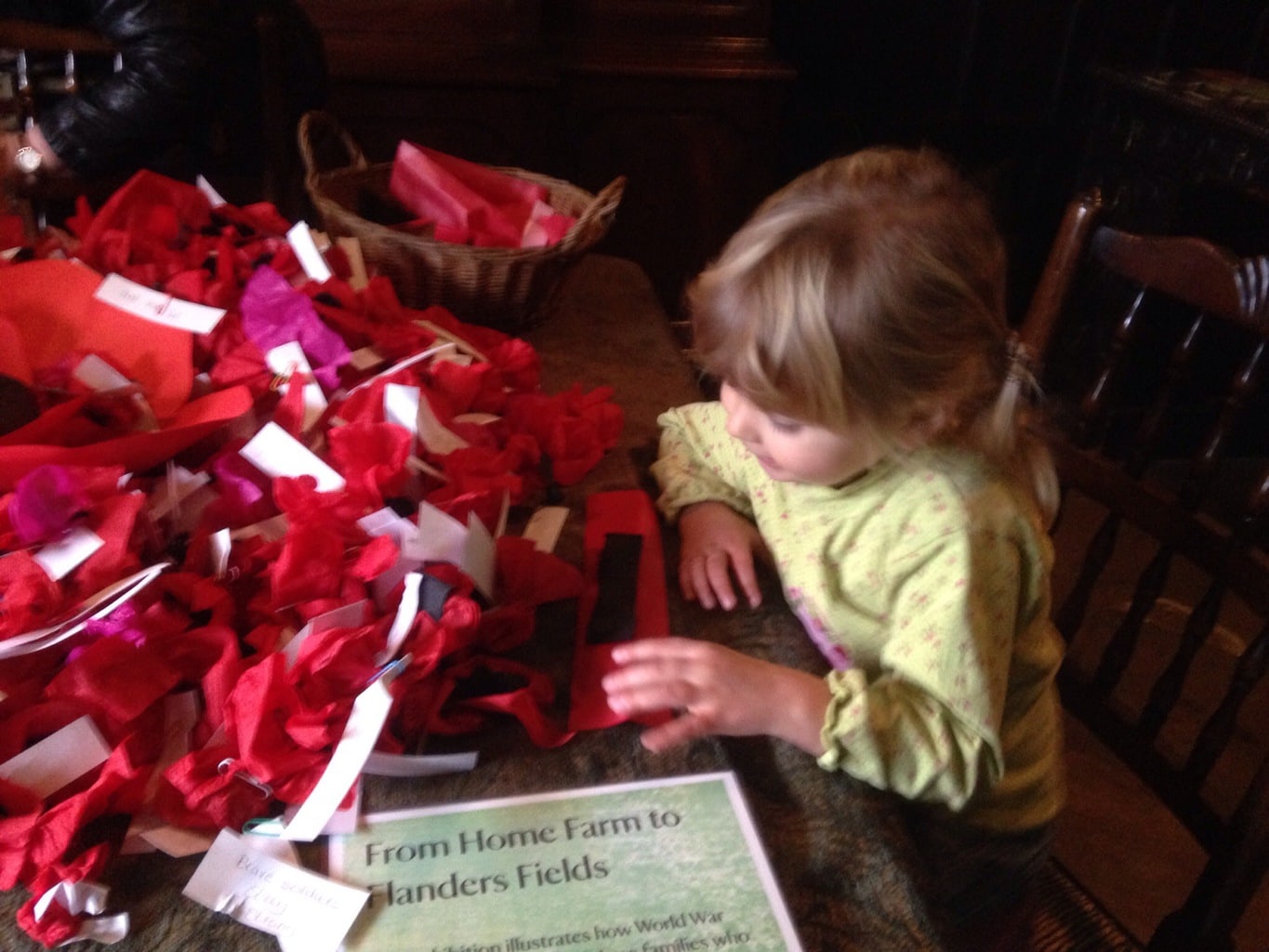 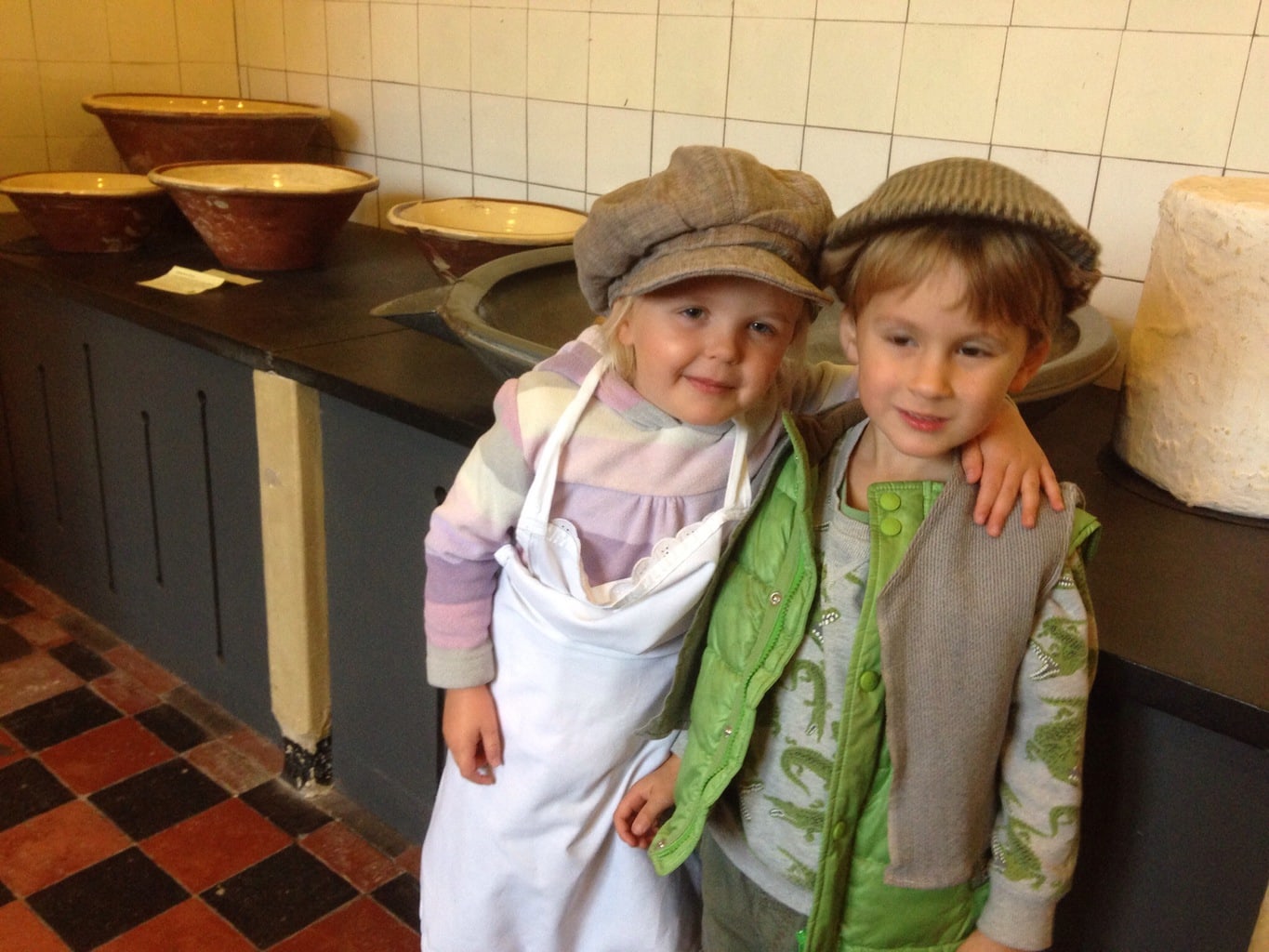 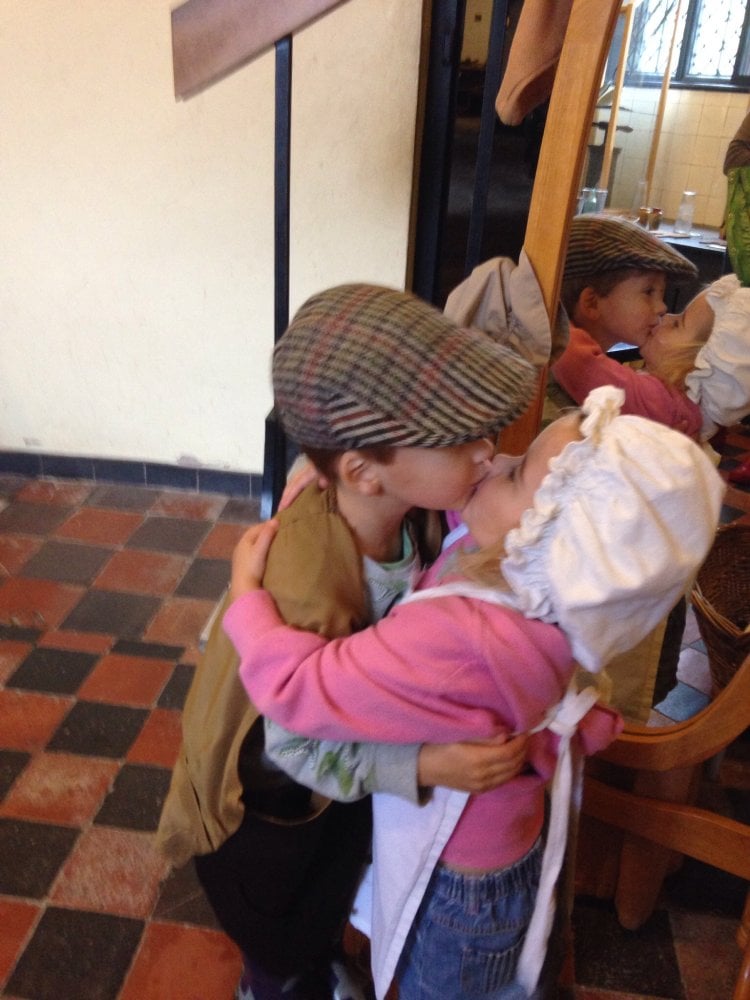 What impressed me was how much they all took in. They loved seeing all the different rooms and working out who would have lived there and what people would have done.  They made up little games and let their imaginations run riot. It was lovely to see.

It was about 2pm when we left the house and the youngest of our party was well in need of a sleep, but the other 4 had seen the maze on the way in and wanted to explore.  It wasn’t very high, or very big, so we thought ‘hey what could go wrong’.  How wrong we were.  It was pretty cute with lots of bridges, gates and low trees, but it was in fact quite complicated and we did get lost. Thankfully the bridges allowed you to get up high and actually find a ‘lost’ toddler, but we did end up having to pass them over the trees to get out, and I squeezed through a gap! 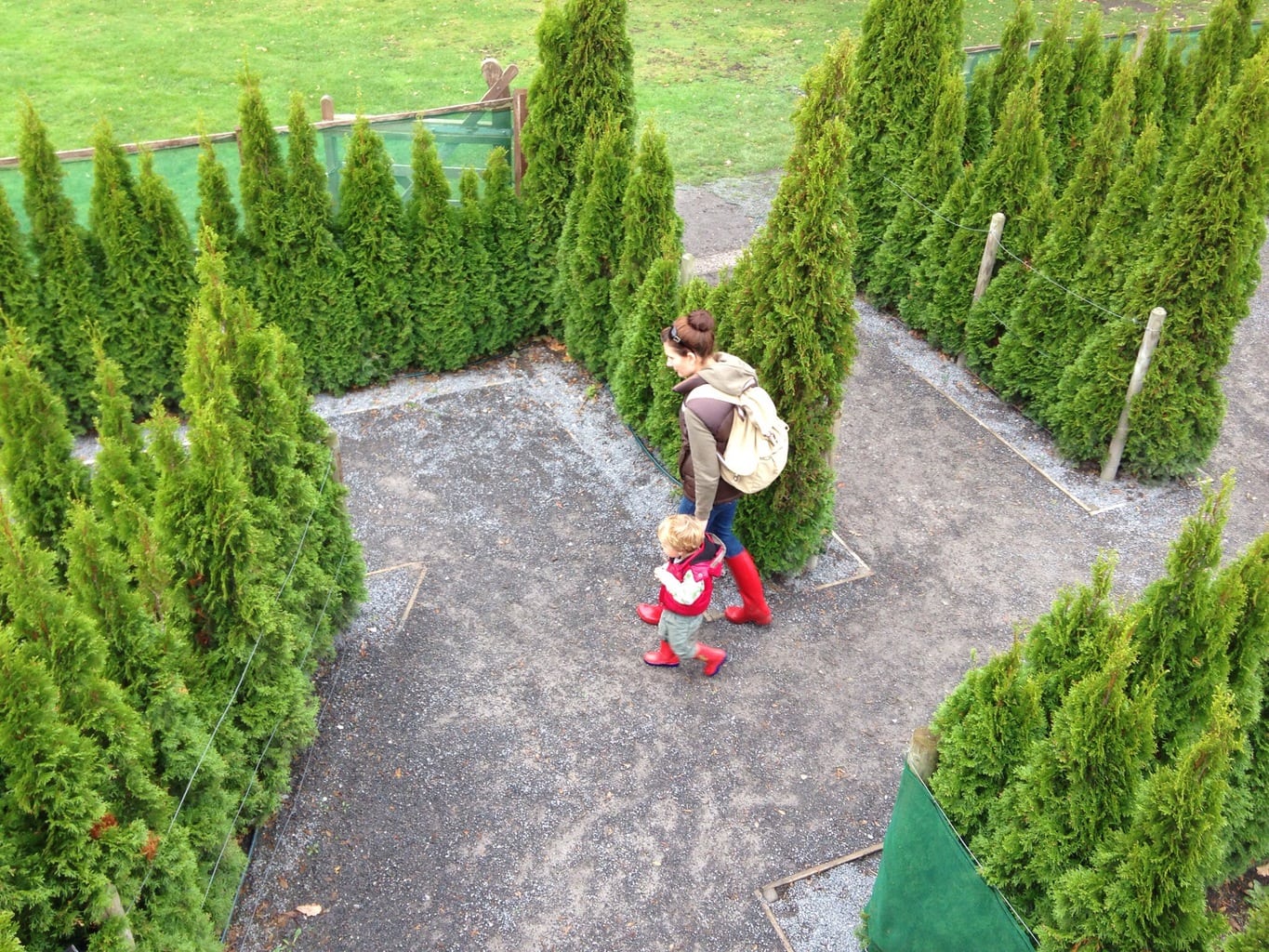 I had already considered buying a National Trust membership for the year but this visit compelled me to do so. They are going to get so much out of visiting all the properties around the North West this year and we may even head to Dunham Massey tomorrow!

Why not take a look at our video!

Looks like you all had a great day out! I especially love the dressing up pictures, so cute. Shame this is so far away from us because it looks like it'd be right up our street.

Looks awesome there, love that the kids can dress up too! Thanks for sharing with our #happydayslinky. :)

What a lovely day out!! We have nothing like this near us, no national trust places at all which is crazy! Thank you for joining in with #HappyDaysLinky, can't wait to see where you go next week x

It's great when places like this really go all out to make it fun for kids. My daughter would love to be given a set of binoculars and to do the dressing up!

Chirk Castle today was even better!