Son of a Preacher Man The Musical has arrived at the Liverpool Empire at the end of a national tour. We went to see it on Tuesday 3 July 2018,  which was the opening night of a 5 night run in Liverpool, which ends the national tour.

The Liverpool Empire is an old, traditional theatre right in the centre of Liverpool and next to the main train station, Lime Street.  The Empire is a well maintained and comfortable theatre, with plush velvet seats.  It has a rich programme of events all year, ranging from the annual Pantomime to touring productions of plays and shows, with a smattering of ballet and opera.

When we got off the train from the Wirral, we were amazed at how quiet everywhere was – it was like a ghost town.  Then we realised!  England were due to kick off against Columbia in the World Cup a few minutes later at 7pm!!

After collecting our tickets from the Box Office we headed to the Circle Bar for drinks, before finding our seats which were in the rear stalls.  The seats were comfortable and we had a good view of the stage.   Shows at the Empire tend to sell out, but on this occasion the theatre was probably less than two thirds full, possibly a testament to the football.  We chatted to a lady whose husband had bought the tickets as a treat for their Wedding Anniversary, and had then not come along as he wanted to watch the match!

And so to the show itself: Son of a Preacher Man The Musical

Based on a book by Warner Brown, ‘Son of a Preacher Man’ is a Musical based around songs from the 60’s, particularly those of Dusty Springfield.  It is set around a record shop in Soho (now a café) where the owner, known as The Preacher Man, dispensed advice to lonely teenagers in the 60’s.  In the present day, his son is persuaded to do the same to three random strangers who turn up at the café.

The Choreography and Musical Direction is by Craig Revel Horwood, of Strictly Come Dancing Fame, and a favourite of ours – especially my mum, who met him last year on a cruise.  The cast that we saw in Liverpool featured well known names such as Michelle Gayle (ex-Eastenders) and Alice Barlow (Hollyoaks & Benidorm), along with newcomers and stalwarts of the stage. 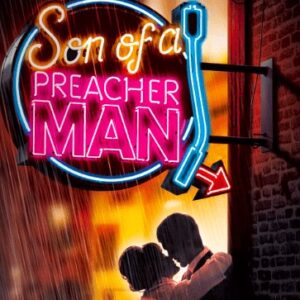 The music was fabulous and entranced the audience, featuring some of the greatest hits of Dusty Springfield, including “The Look Of Love”, “I Only Want To Be With You”, “Spooky” and of course, the classic “Son Of A Preacher Man” – all given a modern twist, and accompanied by on-stage musicians.  The cast all had good singing voices, there were no weak links!

We were a little disappointed in two respects though.  Firstly, we were expecting, and looking forward to, much more dancing, given the involvement of Craig Revel Horwood.  There was actually very little ‘proper’ dancing and a considerable amount of strutting,  Secondly, we thought that the storyline was weak and a touch contrived.  It seemed to be merely a vehicle to get from one song to another, rather than being an interesting story that was enhanced by the songs.

Overall, I would recommend this to fans of Dusty Springfield and the 60’s but perhaps don’t expect too much.

NB: We received tickets to see Son of a Preacher Man The Musical – Review but all views and opinions are our own.