A visit to Stratford upon Avon with the kids is not the standard suggestion for a day out with the kids in the Summer Holidays I grant you but my recent trip to Shakespeare’s Birthplace, Shakespeare’s New Place and Anne Hathaway’s Cottage with kids was genuinely a real success and I’ll tell you why below!

NB: We were guests of Visit Heritage during our trip to Shakespeare’s Birthplace, Shakespeare’s New Place and Anne Hathaway’s Cottage, and stayed at the fabulous Cotswold House Hotel for 2 nights as their guests.

The History of Shakespeare’s Birthplace

William Shakespeare was born in the house on Henley Street, in 1564. It is the house where he grew up and played and where he spent the first five years of married life with his new wife, Anne Hathaway.

Shakespeare’s Birthplace is a striking timber building on the main street in Stratford upon Avon and it seems strange to come across it as you walk past the local Greggs and Lakeland Plastics.

Shakespeare’s Birthplace was a large home for the time demonstrating how relatively wealthy Shakespeare’s family must have been and how he had the time and perhaps the life experience to write the stories he did. 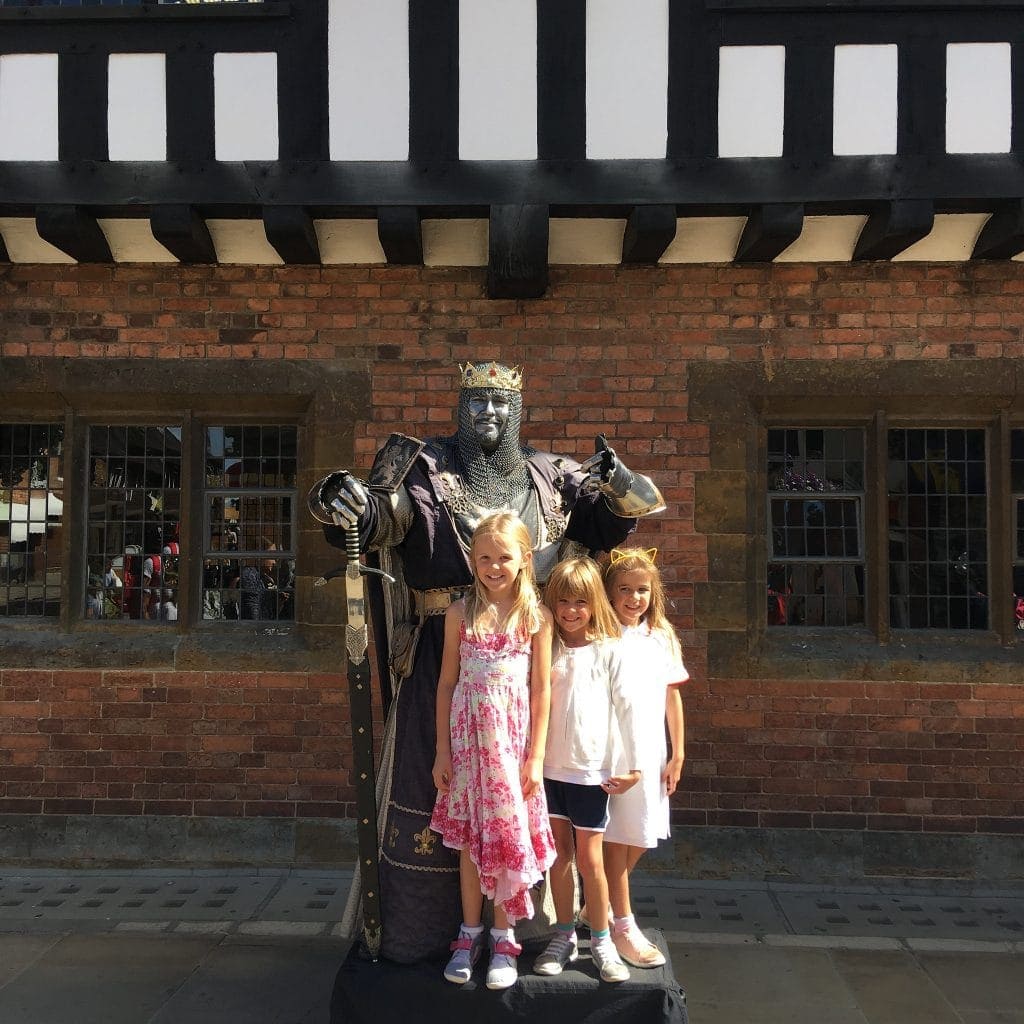 So what tickets should you buy when visiting Shakespeare’s Birthplace?

We visited Shakespeare’s Birthplace, Shakespeare’s New Place and Anne Hathaway’s Cottage during our day in Stratford upon Avon and that took from 10-4 with only a brief picnic stop for lunch.  So I’d really recommend buying the ticket for admission into all the attractions (online beforehand) as it really does work out as good value for money.

As we entered the reception the kids were all given an activity booklet to complete on the way round. Now I don’t know about your kids but mine love a good activity book to complete, so armed with a new pencil each we set off.

The first thing we saw in Shakespeare’s Birthplace was a short film with snippets of all sorts of quotes, bits from films and actors performing on stage. The kids were transfixed and it allowed me to look at a lot of the folios of Shakespeare’s plays and enjoy the different styles displayed.

The wall of brass plaques with all of Shakespeare’s plays on came next and I was fascinated at how many there actually way. The kids also really enjoyed pointing out all the ones they had heard on, helped by the Year 6 Leaver’s Play which had been a round up of some of Shakespeare’s most well know stories. 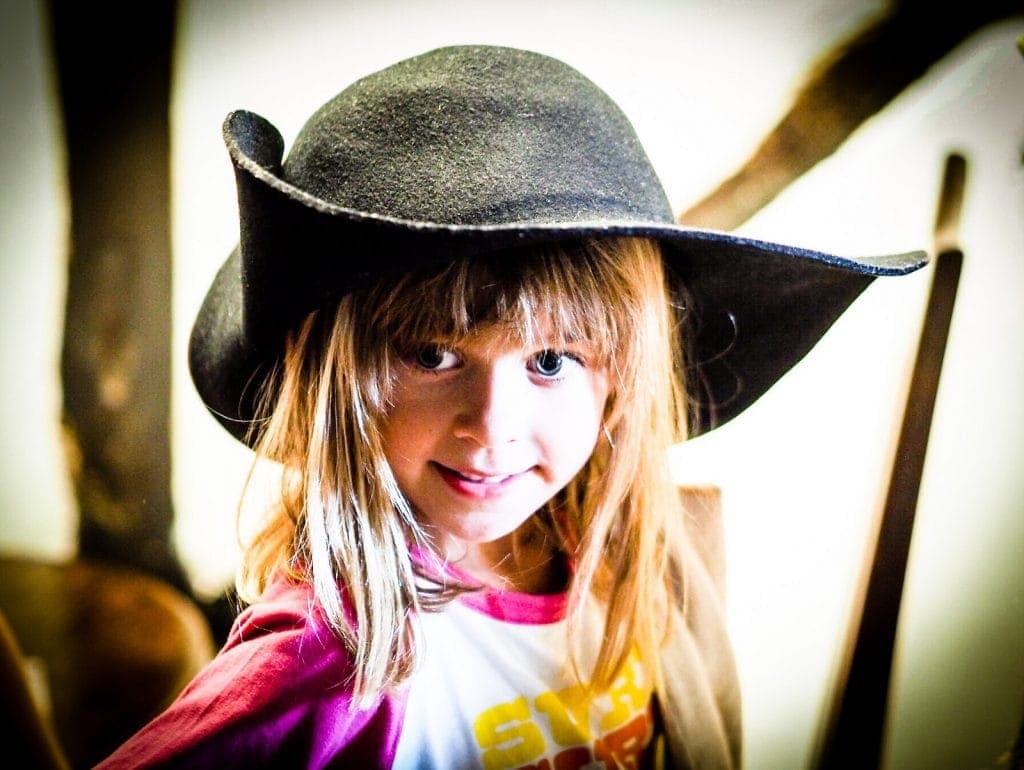 The main house is really well preserved and with the added enthusiasm from the activity book (where the kids had to ask the guides certain questions and find things) we made our way round.

The guides in various rooms were lovely and kind and took the time to explain things in simple terms to the girls. We learnt about why you say “Good Night Sleep Tight” and why people are called “Chairman of the Board” you’ll have to go yourselves to find out why – but the kids loved the examples.

The bedrooms caused a lot of discussion between the girls and the guides. We saw where Shakespeare would have slept with his brothers and learnt about how many children would have shared a bed. The takes about boys sleeping in nightdresses until they were 8 to keep the fairies from stealing them (they didn’t take girls apparently) caused much amusement.

However it was Shakespeare’s dads workshop that caused perhaps the most hilarity. Shakespeare’s dad made gloves as his trade and he would use a wide range of materials. The kids couldn’t get over the fact that they used “wee and poo” to clean the gloves and baulked at the smells when given the chance to smell the boxes. 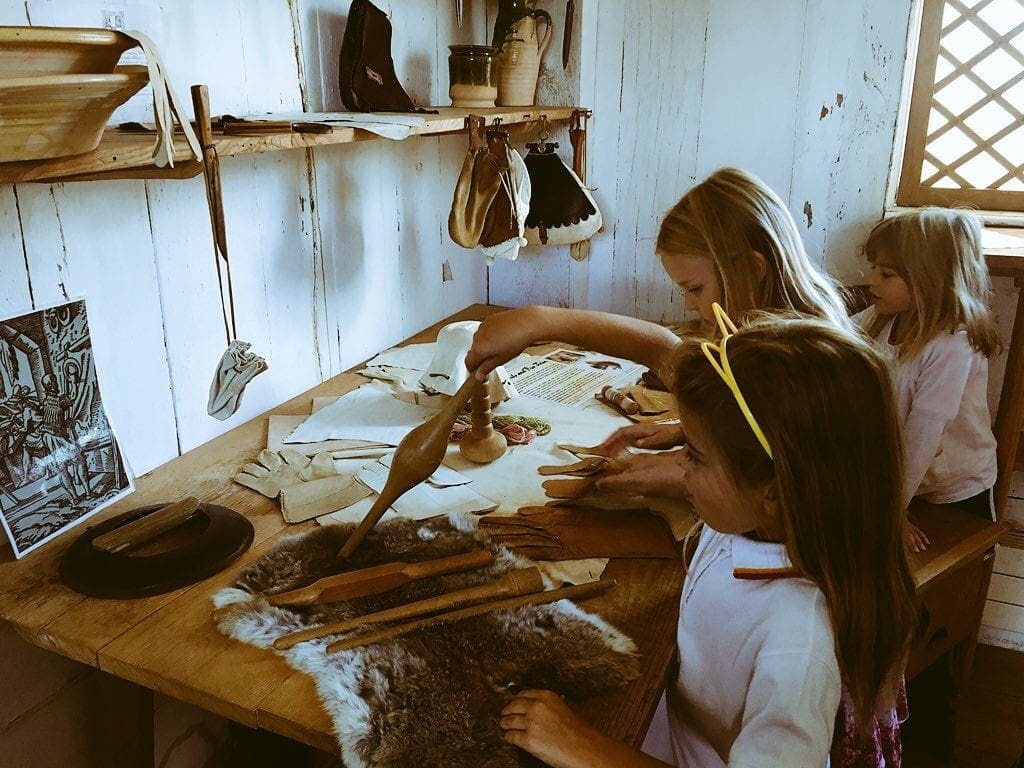 After we left the house we spent a good 40 minutes watching these two fabulous actresses perform any of Shakespeare’s plays you asked them to.  I asked for Winters Tale and Merchant of Venice (my A-Level texts) and the girls asked for Romeo & Juliet – all three were performed beautifully and the girls sat there happily engaged. Even though the language will have been above their heads they seemed to instinctively know what was going on. 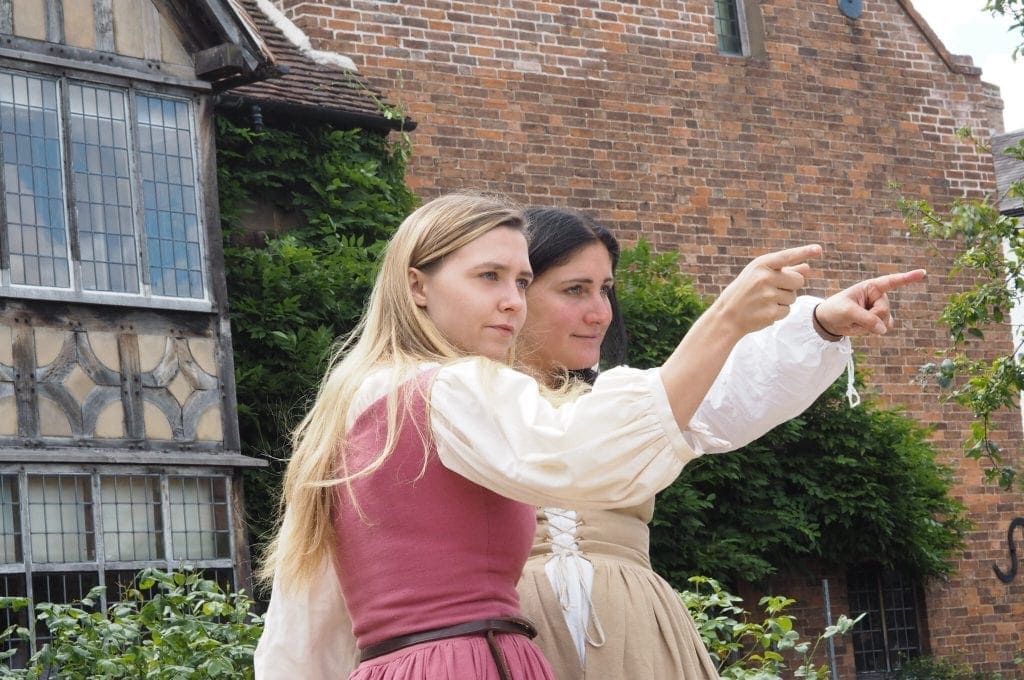 Shakespeare’s Birthplace had been a real success and the activity booklet was completed so it was onto Shakespeare’s New Place.

Tip: You don’t need to pack a picnic, plenty of places to buy one in town

Shakespeare’s New Place is only a 5-10 minute walk from Shakespeare’s Birthplace at the end of the high street in Stratford-Upon-Avon.  We meandered down through the town watching all the street performers as we went.

Shakespeare’s New Place was Shakespeare’s family home from 1597 until he died in the house in 1616. The original house was demolished in 1759, and a registered garden has now been created in its place to commemorate the importance of the site and allow visitors to make their own personal connection with Shakespeare.

It was a beautiful day and we spent an hour wandering around the garden and completing the chidren’s activity book we had been given on arrival. Simple things like finding the names and dates of plays on the flags below 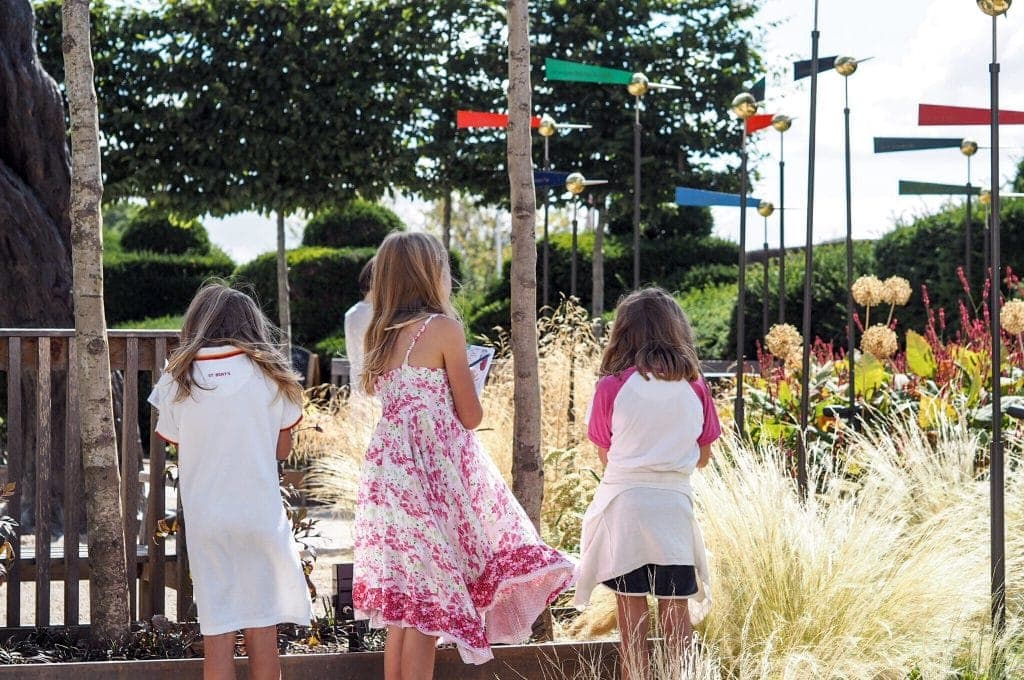 and matching up the statues in the garden with the plays and the descriptions in the activity book: 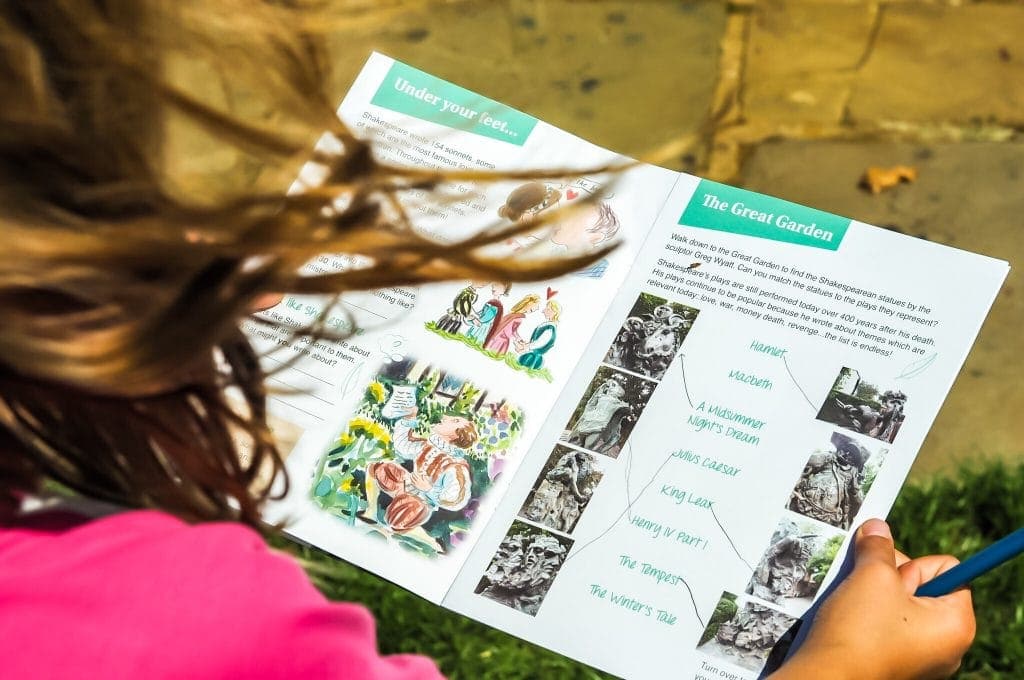 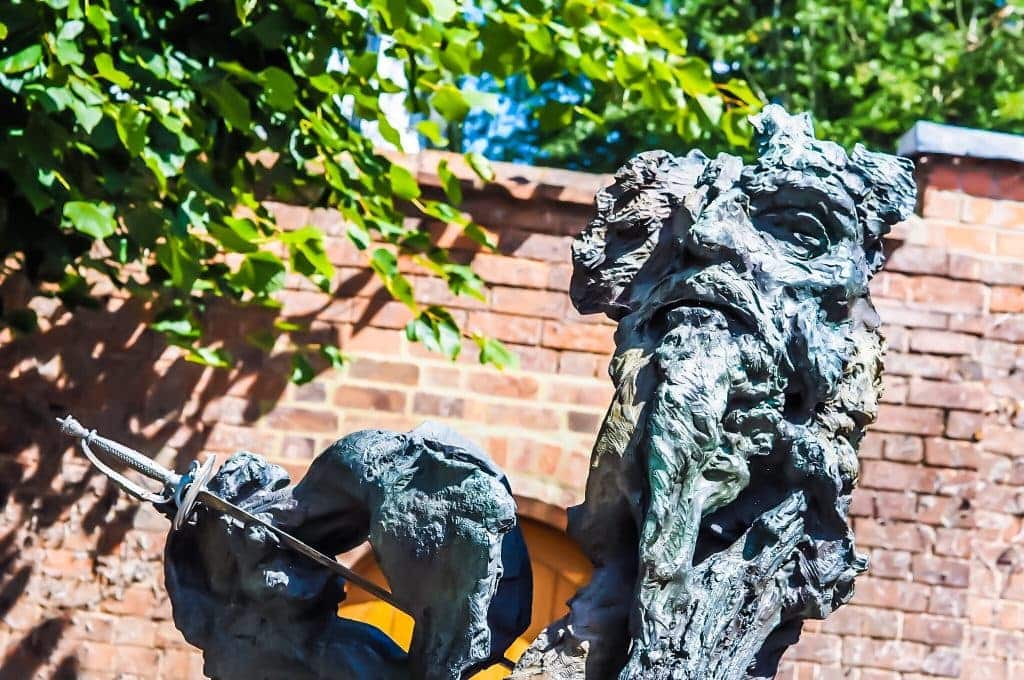 Shakespeare’s New Place was a nice interlude but it was the next place Anne Hathaway’s Cottage that I think the girls really loved and where we finished the day. 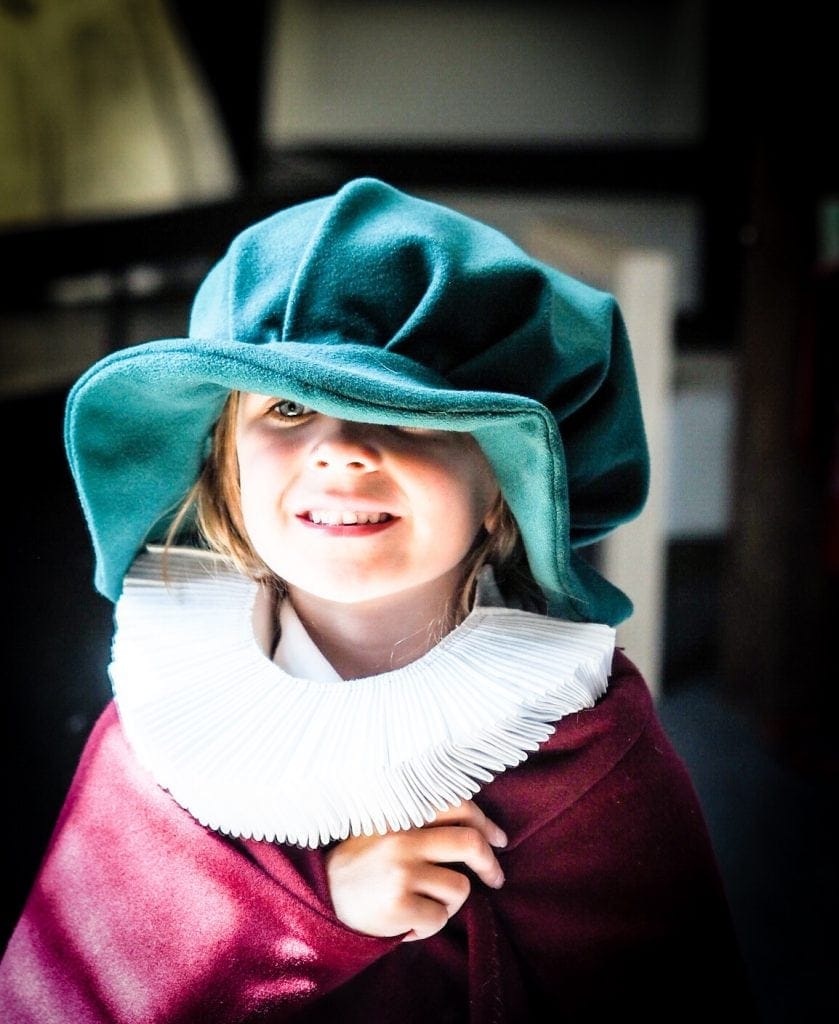 Anne Hathaway’s cottage is a beautiful 500 year old cottage where Shakespeare courted his bride-to-be. The tour around the house (every 15 minutes) takes around 15 minutes and shows you different rooms through the ages from some of the 13 generations of the family who lived there.

The house tour was interesting but it was the outside areas that really kept the kids attention.  There is another activity booklet to complete and a family activity marquee but the day we visited there was also a fascinating experiment taking place in the garden, an experiment to crowd-script an artistic installation of Romeo and Juliet.

Threads of the Unsaid at Anne Hathaway’s Cottage

Everyone was asked to write on a yellow slip of paper what Rome & Juliet meant to them, or their favourite scene or what immediately came to mind when Romeo & Juliet was mentioned and then pin it to the branches. This has created a scarlet web of woo and woe, which will “grow and unfurl into a tunnel of scarlet red threads woven around the orchards of Anne Hathaway’s Cottage.” 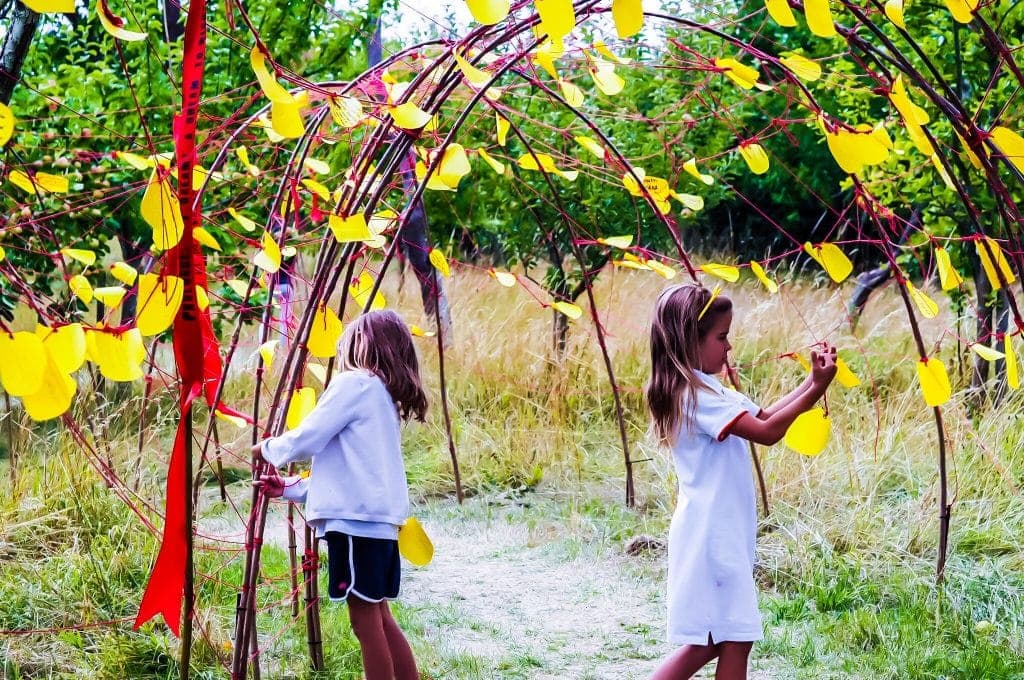 The second an extraordinary mobile ‘Recollecta Salon’ which extracts and collate the many ways people recall and relate to Romeo & Juliet via their spoken word. It was lovely to listen to the girls trying to answer the questions posed to them about love and the meaning of Romeo & Juliet and I’ll be fascinated to hear the end product. 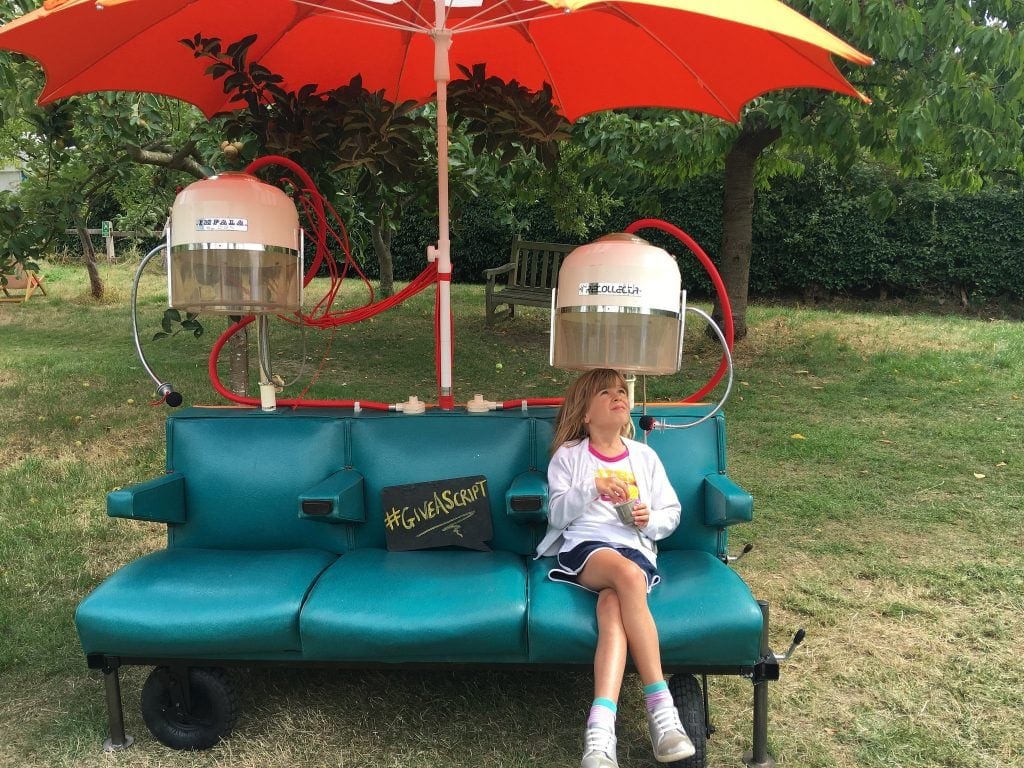 Threads of the Unsaid won’t be there forever that’s true (it’s finishing on 1st September) but the rest of the gardens are lovely to wander around with sculpture gardens, willow gardens and cottage gardens that all keep the children entertained especially with the usual activity booklet to complete.

Stratford-Upon-Avon is a short drive from junction 15 of the M40, close to the M42 and M6 motorway networks. Stratford-Upon-Avon can be reached by road from London in under 2 hours and Liverpool from 2 hours 30. Direct rail services run from London Marylebone to Stratford-upon-Avon train station, which is a  ten minute walk from the town centre. There are a lot of car parks dotted about the town and we paid £7 for most of the day. With kids Anne Hathaway’s Cottage is a short 5 minute drive, and Mary Arden’s Farm is close by too. Definitely one for another day!

What a fabulous experience to give your girls!!