Round the World in 80 Days at The Lowry is a fun-filled round the world trip without leaving Salford!

The mysterious and fabulously wealthy Phileas Fogg wagers his life’s fortune that he can circumnavigate the globe in just 80 days. Fogg and his valet, the brilliantly named Passepartout, travel from Victorian London to the exotic subcontinent and the Wild West in a race against the clock.  Unbeknown to them, Fogg is suspected of having carried out a robbery at the Bank of England and is being pursued by a somewhat incompetent chief inspector, whose aim is to catch up with him and arrest him.

A fantastically talented cast of just eight actors play over 125 characters from across the globe, in an imaginative and hilariously funny escapade which involves six trains, five boats, four fights, three dances, two circus acts, a sleigh ride and an elephant!  The set design is remarkably simple but very effective – involving just a staircase made of suitcases with a giant world map as a backdrop.  The suitcases are used ingeniously in a variety of ways – from storing props to being used as a customs desk, or to create ships and train carriages.  The cast manage to create great pace with their movement – we loved the way the characters would sway from side to side (moving the furniture with them!) when on a boat, or jigged up and down brilliantly mimicking the movement of passengers on a train.  They moved in and out of different accents with apparently no effort, and the costume changes were impressive. 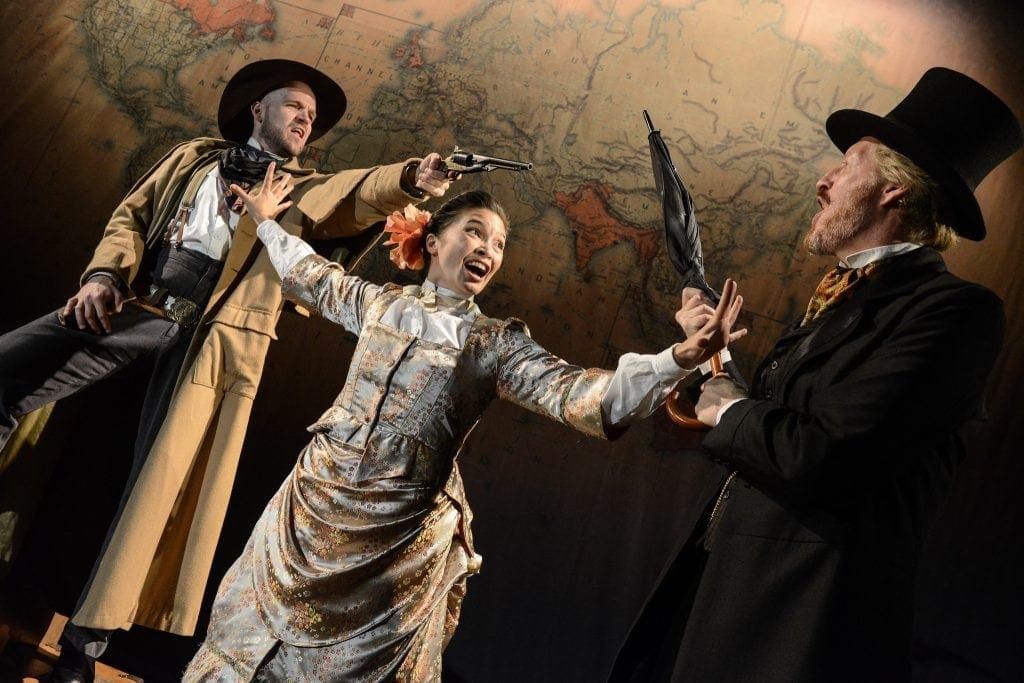 The fight scenes were a highlight – staged in a Matrix-like way, with the actors being feet apart yet still in perfect sync.  Fogg is wonderful, but the star of the show is Michael Hugo as Passepartout (or Passionfruit or Parsnipsoup as he is also referred to in the show, along with many other silly variations).  He gives an energetic, funny and warm performance, and the way he is able to improvise with the audience is astonishing.  He managed to compose a witty and clever song about a BT engineer called Martin from the audience in about 10 seconds flat, without being in any way rude or too personal.

There was a marked contrast between the two halves of the show, with the first half being much slower, and the second a much more frantic, almost slapstick affair.   It worked, though, as it mirrored the increasing sense of urgency as time slipped away from Fogg.

My 11 year old son and I loved every minute, and I can’t recommend it highly enough.  If you see one performance this festive season, I’d make it this one!

NB: Jane and her son received tickets in order to review but all views and opinions are her own.