When you and your family are invited to “the biggest display of lighting and special effects York has ever seen” there is a high level of expectation!  So we arrived for ‘Christmas at York Museum Gardens’ hoping those expectations would be met (or our 5 and 8 year old were going to be having a serious moan about being dragged out into the below freezing temperatures!

For the first time ever, the historic York Museum Gardens will be transformed into a magical after-dark experience filled with colour, music and the biggest display of lighting and special effects York has ever seen.

The Museum Gardens, right in the centre of York and close to the magnificent York Minster, is a firm favourite of many locals.  We’ve spent a lot of time here over the years, so we were very much looking forward to seeing how the gardens had been transformed. 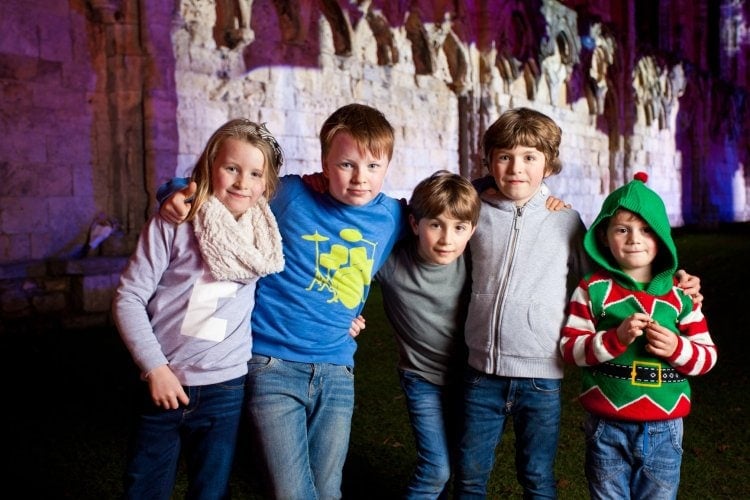 I will admit that we arrived somewhat dubious as there had been a lot of reviews on local Facebook groups that were at best lacklustre and at worst seriously critical.  There were comments about the walk through the attraction only lasting half an hour (the web-site suggests allowing 60-90 minutes) which would make the admission prices seem extortionate:

You are advised to pre-book tickets.  Those tickets give you a set entry time.  We went for 5pm on the basis that we could prolong our visit by enjoying our dinner from one of the trade stalls, but still walk around early enough to avoid a late bedtime.  I can only imagine how it would have been without this staggered entry system.  The first part of the route, a ’12 days of Christmas’ trail, was completely rammed.  A lot of people seemed to be simply walking through and ignoring the displays to escape the crowds.  The second part of the route, and indeed the main attraction, took you from the York Gallery gardens through into the Museum Gardens themselves.  The first area of displays were large musical LED lit Christmas tree structures that changed colour and were perfect for running around and having fun.  Lots of children were clearly enjoying the space and light and we spent a good 10 minutes here.  The next substantial display we reached was a Christmas story, along with a lovely selection of classical music, being projected onto the huge and beautiful ruins of St Mary’s Abbey.  My 8-year-old was particularly fascinated by the scenes as the characters appeared to come in and out of the real window and door openings.  I only managed to get her to move on as she was becoming so cold standing still; I think watching the show twice was enough for our 5-year-old though.

We then stopped outside the snowflake lit Yorkshire Museum and all shared a cinnamon apple waffle (£5), before moving onto the crowds playing the musical tree stumps.  This would have been a lovely part of the attraction, if there were a lot less people clambering to have a go (but it was ever thus at any event targeted at children!).  A short stroll and we found ourselves joining a mostly stationary queue.  We soon realised it was a queue to see Santa sitting in his cabin.  I had heard stories of people queuing for half an hour to have a short and sweet conversation with Santa and a photo, before moving on.  We decided that this was not something that would enhance our visit, indeed everyone was likely to get very cold waiting.  This is not a Santa experience and to be honest it seemed a bit of an odd and unnecessary addition when there are so many wonderful Santa experiences locally. 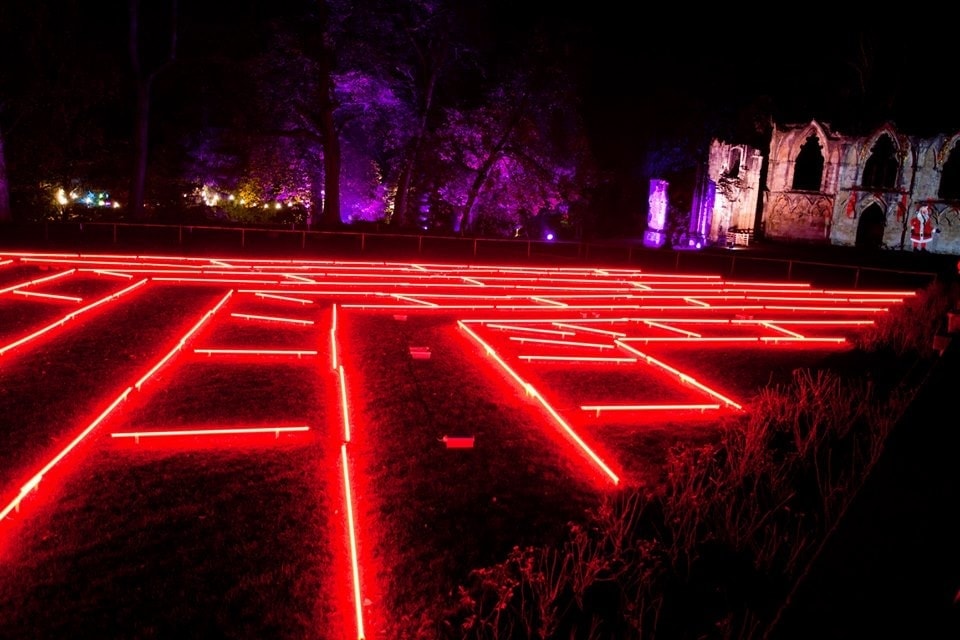 The 20m twinkle light tunnel was the perfect place for a festive selfie, moving on to the disco ball tree, with appropriate tunes and what I assume was a little dance floor (it was being used as one anyway!).  You then enjoy a lawn of large LED letters spelling out festive words, and onto a path not usually open to visitors.  This takes you alongside the Library and a lawn of fire lanterns, and onto an under croft serving a small selection of food and drink, along with selling giant marshmallows for toasting over a large fire pit (£1.50).  This is the end of the tour.  By this stage you have walked through the Museum Gardens and enjoyed magical lighting of trees and Abbey ruins, along with various other small illuminations not detailed in this review.

The attraction was well lit and utilised existing paths or temporary hard covering so was pushchair and wheelchair friendly (not to mention our joy that it was not a slippery, muddy mess!).  There were plenty of staff on hand.  It was a nice surprise to find that 2 sets of temporary toilets had been installed as the park does not usually have such facilities.  The music and lighting create a festive and joyful atmosphere; it was beautifully executed, and all the attractions were clearly new.  Contrary to the moaning minnies on-line, I did not hear anyone being negative at the event itself.  Indeed, there was a lot of festive cheer going around! 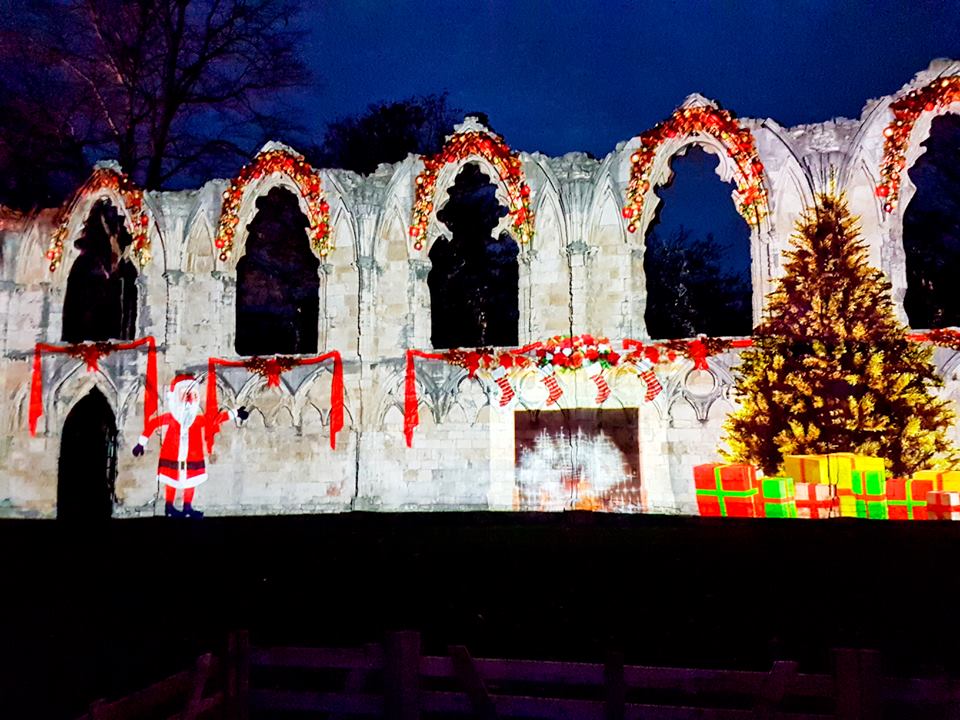 There are 3 different areas to get food.  I advise that you use the one right after the entrance.  There is far more choice here (and it’s unlikely you’ll find yourself bothered enough to walk back to the start when you’ve completed the route).  The food itself is varied and of a high standard (we enjoyed Yorkshire pudding pies with rosemary roast potatoes and the apple waffle mentioned above).  However, despite this attraction quite clearly being targeted at families, there were no appropriate offerings on food or drink.  So, a sausage bap (£4.50), hot chocolate (£3) and half of a shared waffle (£2.50) would be your cheapest meal option for your child.  There is a small merry go round, probably best for the under 4’s as it’s a slow ride (£4), a small hook a duck type stand (£3), a big marshmallow on a stick (£1.50) and the option of neon face painting (£4).  On top of the not insubstantial entry fee these additional costs left us feeling a little ripped off.  It is true of course that you need do no more than simply enjoy the attraction, but, on a dark, cold night you’ll at least want a hot drink.  Would it be too much to ask that there was a half size drink for children? A free marshmallow? Or indeed that the small merry-go-round was reasonably proceed?  I wonder if the prices of the additional attractions will be revisited, as there was minimal take up, unsurprisingly. 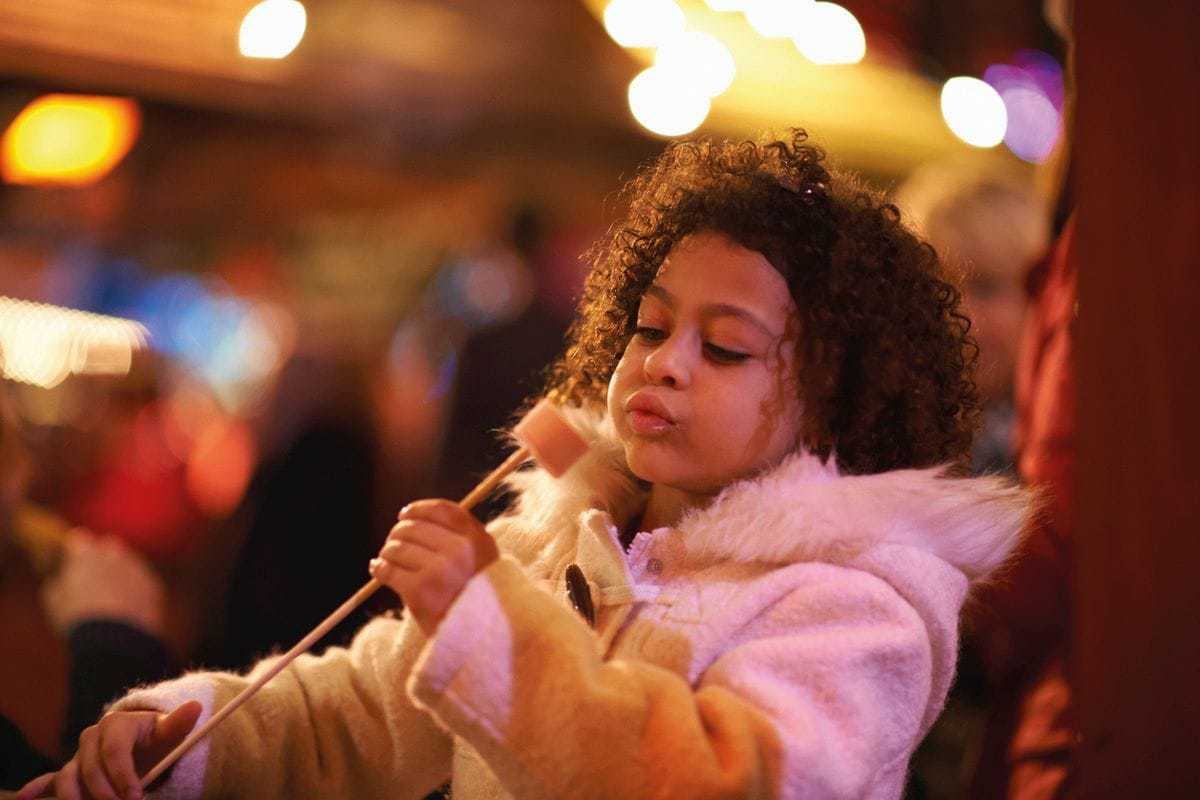 We were at the attraction for about an hour and a half (including probably 20 minutes for dinner).  We all had a lovely time and left feeling happy and festive.  The event organisers have created a beautiful event, appealing to all age groups but with a special affinity to children.  I have happily recommended the attraction to friends, along with a health warning on the costs involved!

NB: Kelly and her family were granted free entry in order to review – all views and opinions are her own.