During our time in Porto we were kindly given tickets for the Hop on Hop Off bus in Porto by Porto & Douro Experiences.  The tickets lasted for 48 hours and included an hour long river boat tour too.

I love a hop on hop off bus tour. It’s a great thing to do at the beginning of a trip so that you get a feel for the layout of the city and find out something about the history, however I do find that they vary a lot in terms of how interesting they are.  I’m afraid to say that the Porto Blue Bus wasn’t one of the exceptional ones.  The commentary was sadly a little underwhelming and at times quite frustrating, the kids in the end just turned them off and looked out of the window – as did I. 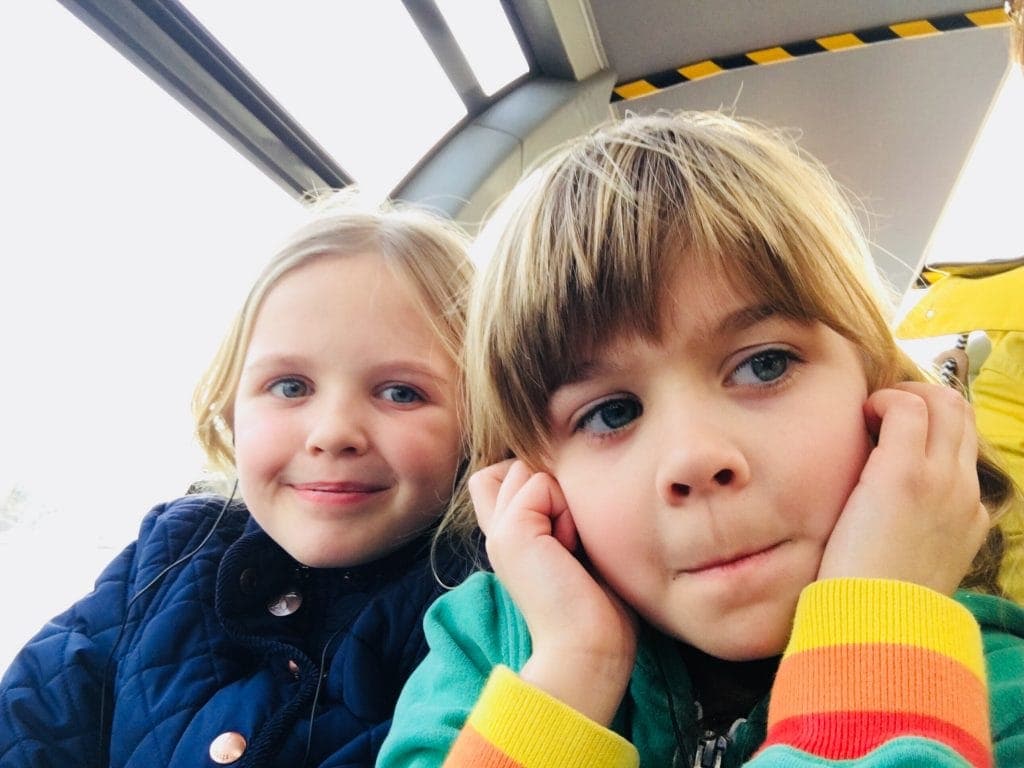 There must have been more to say about Porto, in fact we know there was as we had had a wonderful tour earlier in the week with Portoalites, but the bus tour seemed to play more (annoying) music than information about the city.  It also at times failed to keep up with where we were, and pointed out building we must have passed already, or pointed out ‘a building on the right’ when there was in fact around 40!

The bus staff were however very helpful and kind. Waiting briefly for us when we weren’t all in the right place at the right time, and helping us out with locations that we wanted to get off at.  The seats were comfortable and all the places the free headphones plugged in worked well. Handy stickers like they had on the boat to tell you which language was which number would be useful but that’s a small point.

The kids loved the fact that there was an open and covered bit on the bus to protect you better from the wind, or rain or sun.

We were really lucky with the buses in general. They ideally come every half an hour and for 3 out of the 4 times we used the bus we didn’t wait more than 5 minutes. Once we waited 45 minutes but then it was rush hour and the buses had just got stuck in some traffic. Some signs at bus stops or an app you can use to track the times of the buses would really help the whole process be a bit smoother but then perhaps you don’t really pay enough for your tickets for that technology. 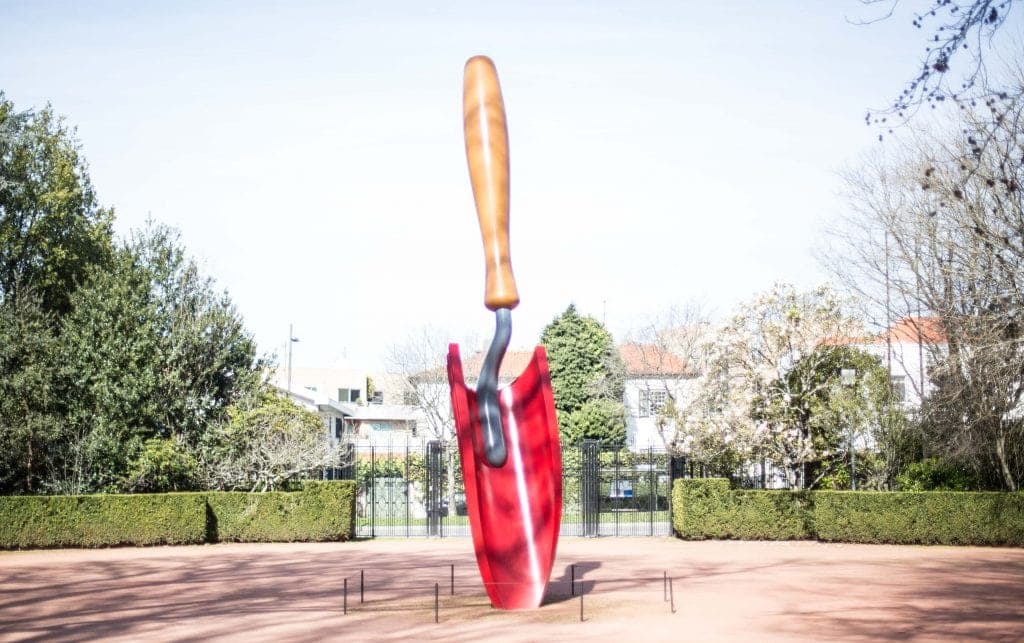 The locations the hop on hop off bus visits is however great and they do cover all the attractions in Porto you are likely to want to visit, we found the bus particularly useful to visit the Serralves Contemporary Art Museum which isn’t on the metro line and would have involved a metro and then a local bus, or a fairly long walk. Thankfully the Hop on Hop off bus in Porto drops you right outside.We really enjoyed the outside space at this Museum and will be writing a review shortly so will link it when we do!

You can see all the locations the Blue Bus Hop on Hop Off Bus Tour stops at here:

So what about the River Tour which is combined with the Hop on Hop off Bus in Porto?

For us the River Tour wasn’t even as interesting as the Bus Tour, so didn’t score very highly with adults or children.  If booked alone the river cruise is called the 6 Bridge Tour and in reality that’s what it was. A trip up and down the river for an hour with a talk about the bridges. There was so much more that the river tour could have been and so much more that they could have talked about. For me I think it may be one to book if its a lovely sunny day and you simply want to soak up the rays but if it’s a little bit cooler and you think it is going to give you more information about Porto then this isn’t the trip for you.

So it it worth booking the 48 hour Hop on Hop off Bus in Porto with River Tour?

For 48 hours an adult ticket was E18 Euros each (which included the boat tour) and E9 Euros for Kids, which for our group of 6 would have amounted to E81 Euros.  On balance I don’t think this bus tour and river tour would have been good value to us. We did like seeing the sights and usefully hopped on and hopped off the bus at the Museum and then at the beach near the Sea Life Centre but realistically we could have booked an Uber to take us to the Museum and just used the metro or tram for the beach.  If the information on board the bus and the river boat isn’t interesting and engaging then the value they provide sadly just doesn’t stack up when you weigh up the cost.

Not one for us to recommend when travelling in Porto with Kids. 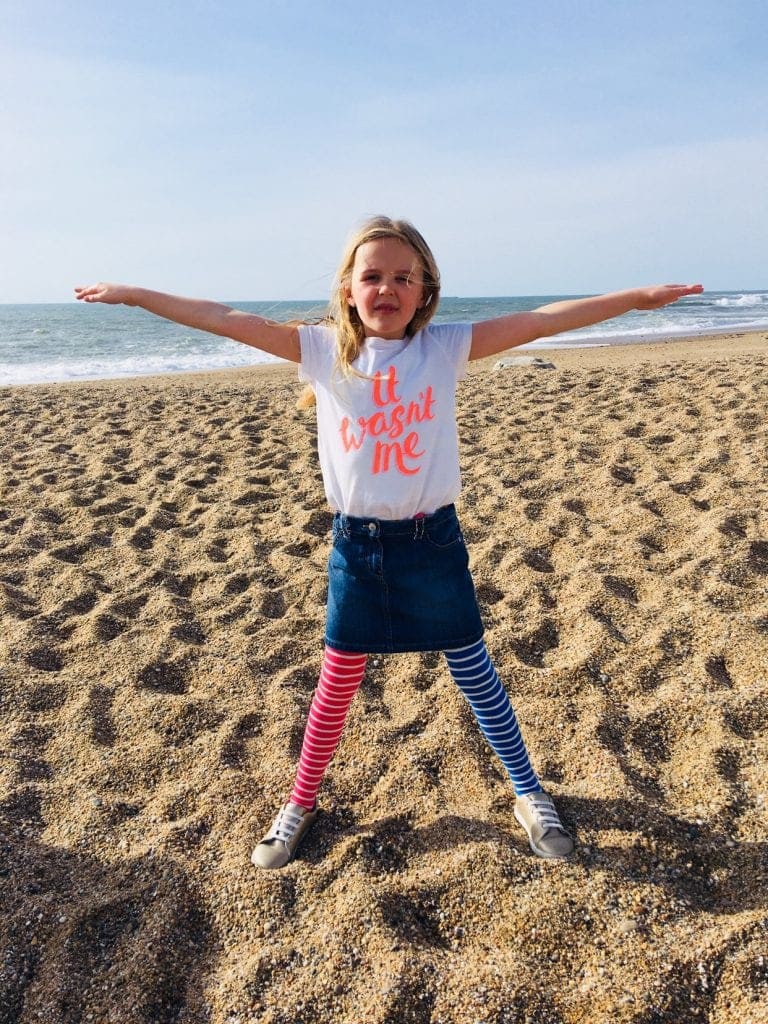 It is such a shame the information wasn't great, but it sounds like there are still plus points to it. I would probably still use it as the kids do love an open top bus

Ah it's always a shame when things aren't quite as good as you expect them to be. Useful to know though - we tend to prefer exploring on foot in a new city anyway. Porto sounds fab and it seems like you found plenty of other interesting things to keep you all entertained while you were there.

When these are done well and are informative and engaging for kids, then they can be really worth it can't they? Porto sounds amazing though! (:

Oh what a shame it didn't live up to expectations. We did a bus tour in Lisbon which was pretty dire to be honest, the head sets didn't work, the information wasn't very interesting. It's so disappointing. The tour with Portoalites sounded great though

Handy review Karen. It sounds like a tour guide is the way to go in Porto