We usually head to Llandudno in the summer months for a walk along the prom or the pier, followed by an ice cream soda, in Fortes, to remind me of the years prior to the A55 when Llandudno was the shopping mecca of North Wales and I used to get dragged there twice a year by my mother to do a whole seasons shopping in one trip.

Somehow, in January, the walk along the prom or the pier didn’t feel so enticing with a nearly two year old and two bickering nearly teenagers. So, what to do on a windy weekend in January in Llandudno to entertain all of them?

Strangely, the older ones seem to enjoy nothing more than doing something they should have grown out of, particularly if they can claim they are doing it solely for the benefit of their 22 month old sister.

At first, we were a little concerned that Peppa Pig live on stage might be a bit much for the little one and that if we told her that she was going to see Peppa Pig, who she adores, she might be disappointed if the puppets on stage weren’t quite as expected but having checked that the show would last just over an hour, we decided that it would be worth a go.

The seats had booked up amazingly quickly but, on booking a good few weeks early, we were pleased to see there were seats left along the back row (easy escape in the event of it being necessary and no one behind us in the event of standing up or wriggling!) Even better, as Miss bright as a button is still under 2 years, we didn’t have to pay for her.

When we arrived, the theatre was packed but fortunately not too packed for a quick visit to the disabled toilet (the queue to the ladies was a little lengthy and we headed to the disabled loo in the pretence of looking for changing facilities – we found none but it served it’s real purpose), followed by the chance to buy a small pot of Pringles to keep little one going (being a “good” mum, it was only as we headed in for the 4pm showing that I realised that dinner time in nursery is 4.30pm!)

…and in we went. Seats at the back, easy escape, perfect. Only a little bit of confusion when we all took our seats and little one announced “where mine??”, she soon realised she could sit on Daddy, then big brother, then middle brother, then mummy, then back again and was happy.

We had made a conscious effort not to tell little one what was really going on so as to avoid any loud announcements of “that not Peppa Pig daddy!” which seemed to pay off when the curtain came up and initially Daisy and Peppa’s better known friends played little one’s favourite game of hide and seek and tried to find Peppa and George. She was mesmerised. 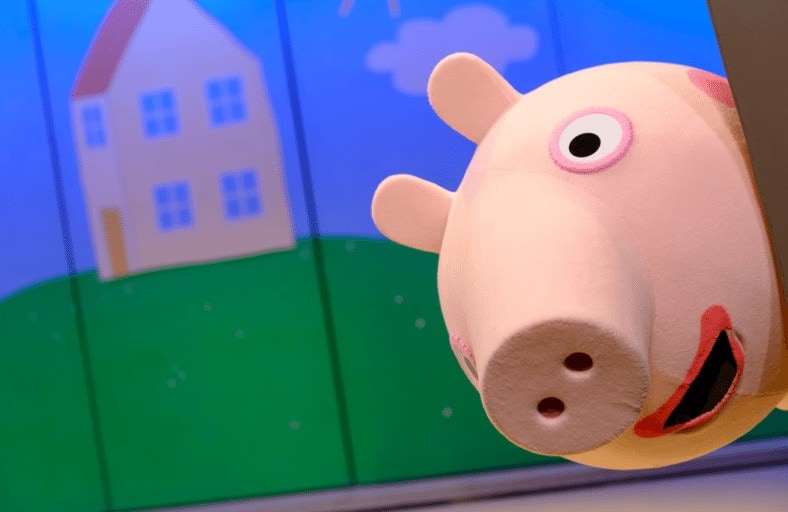 Then suddenly, on came Peppa followed by little one’s loud shout, to ensure that Daddy and anyone else heard: “That Peppa Pig, Daddy!”. So, clearly, there was no doubt, despite the clearly visible puppeteers behind Peppa who didn’t seem to have been noticed at all.

Peppa in the garden playing hide and seek, jumping in muddy puddles, Peppa in the bath, Peppa in bed, Peppa in the car, Peppa at the beach and amazing animals in the rock pools. She seemed to enjoy every minute and I think the nearly teenagers did too; although all too clever 10 year old was a little put out by the fact that the puppeteers were a little obvious. The special effects were also entertaining for nearly teenagers at the back who could see the technician squirting his water pistol over the audience to create the water spray from the muddy puddles. It’s just a shame that they didn’t have bubble machines at the back for when Daisy blew bubbles over the audience at the front.

Overall, a very enjoyable production and the only real disappointment was finding that the Emperor Chinese buffet, where we headed after the show, was closed for two weeks. Fortunately, we managed to avoid teenage disappointment with the slightly more expensive but just as good Chinese buffet at the Semaphore in Llysfaen which is always an enjoyable experience.

Guest Post by Rachel.  Rachel and her family paid full price for their tickets and received no compensation for this post.