When we were invited to visit the National Forest Adventure Farm the first thing I did was check out the website. Living only 45 mins away we had somehow missed out on it’s existence, however, when I questioned other parents their response was ‘Oh yes, it’s great!’. How had we missed out on this treasure? It was time to make a visit…

We arrived at opening time (10am) and parked up, heading straight for the cafe! With a teething 15 month old I had been up since 5am and was in desperate need of coffee! The cafe was part of the same building as the soft play and our two wasted no time at all in going off in separate directions (one to the big and the other to the toddler area) while we gratefully sipped coffee (from a ‘proper’ coffee machine!) and I tucked into some much needed cake (delighted to see there was gluten free carrot cake!). At this point we felt the day had peaked already! The slides were the best I have seen in any soft play – three huge slides; one of which a terrifying drop slide which I have to admit I was delighted when my 6 year old was happy to give it a go! Much as it would have been very easy to stay here, we dragged the children away with the promise of dinosaurs! 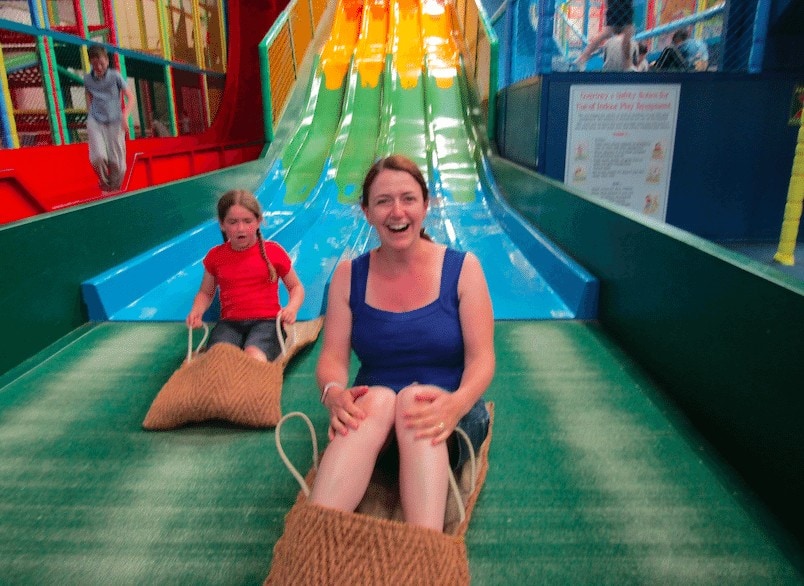 This Summer, the National Forest Adventure Farm has taken on a couple of ‘live’ dinosaurs! As we entered the main area, we were immediately greeted by the dinosaurs and their ‘keeper’, this young lady was fantastic with my children and really took on the character of the dinosaur keeper – she kept re-appearing throughout the day and really was an excellent member of staff! After making friends with the dinosaurs we waved goodbye and promised to come and watch the ‘Dinosaur Training’ later on in the day. 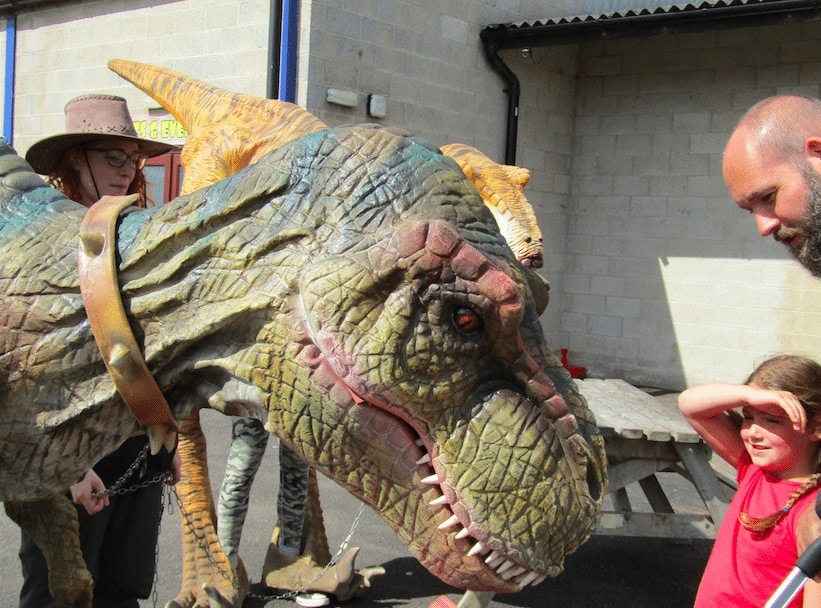 Our next stop was panning for Fossils…yet again, we were greeted by a pleasant and enthusiastic member of staff who coached my daughter through the process and encouraged her to pick out all of her fossil finds…we then had a go at identifying what we had discovered while the toddler had a go at a little fossil hunting of his own in the sand pit! 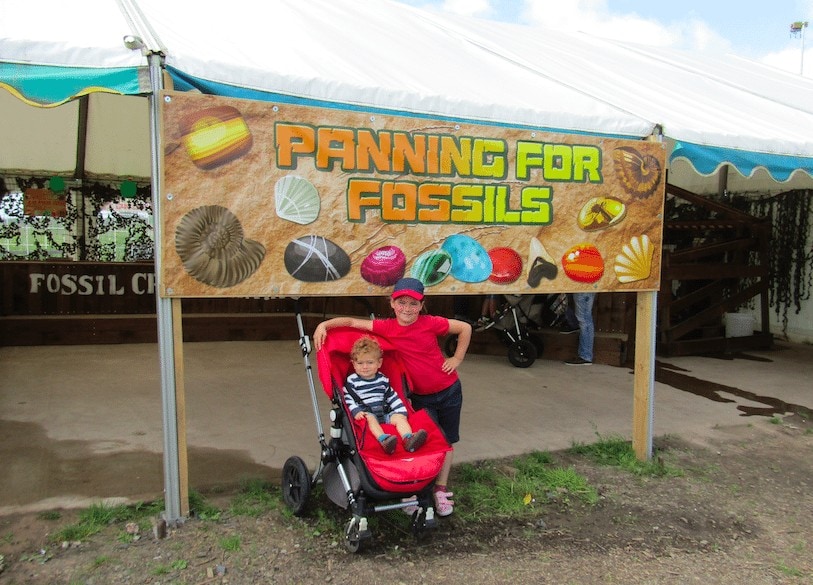 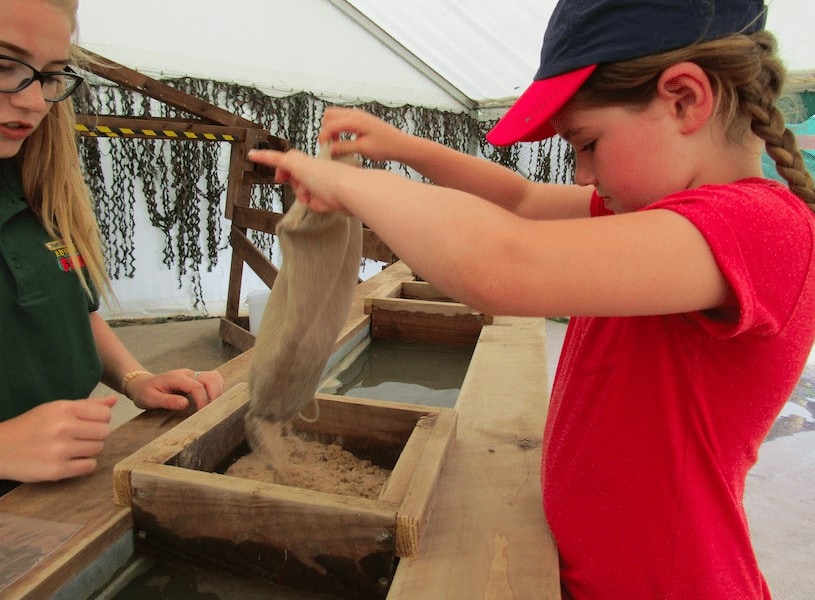 At this stage, we could put off the maize maze no longer…there are two options for the maze; a ‘Dino-Babies Mini Maze’ where you hunt for 6 different dinosaur stamps and a much larger maze were you hunt for 10 bones over the huge 10 Acre site. With a push chair in tow we decided to opt for the mini-maze which our two were more than happy with. We spoke to a couple of other families about the larger maize and it seemed like an excellent challenge for the older children but on hearing it was taking around a hour to complete, we decided to use the time exploring the rest of the farm. 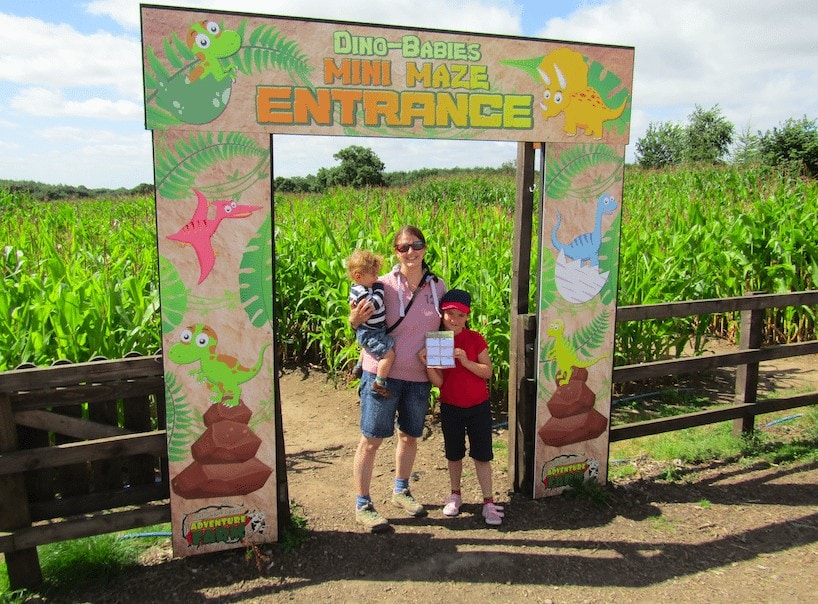 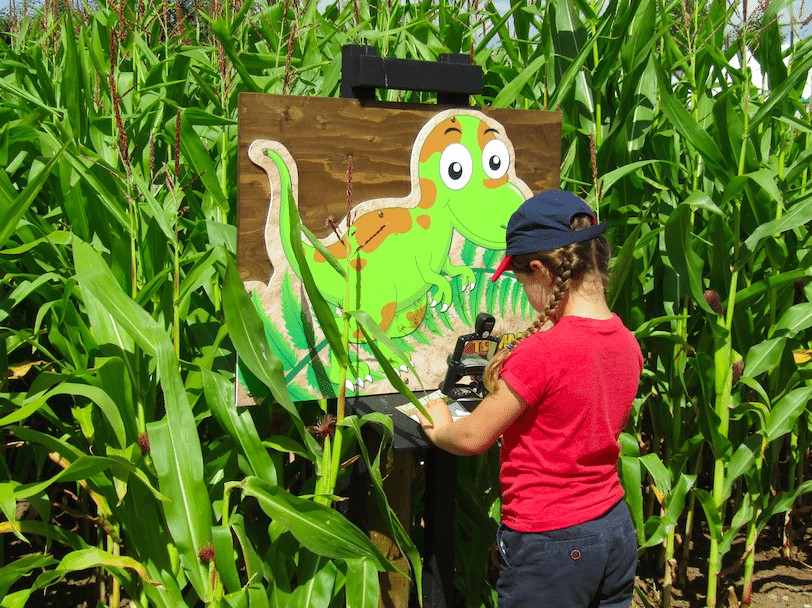 For the first time ever, we noted the timings of all the activities and actually felt quite organised! We ate our lunch on the hill while watching the Dinosaur ‘training’ (again, huge credit to the young lady leading the session who kept the children totally captivated with the dinosaurs!) then quickly moved over to the ‘hands on’ session where we were able to hold guinea pigs and rabbits. 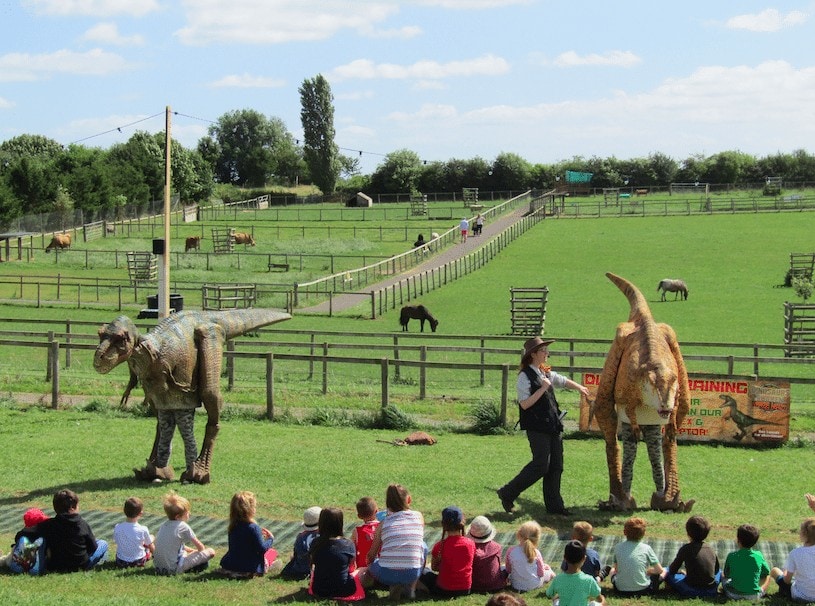 At this stage, we had a little time before the Sheep Racing and so took the time to explore the extensive park. Daddy and Daughter took part in some serious pedal go-cart racing while I explored the fantastic Jurassic themed sand pit with my little one. Again, this was fantastically presented and we all spent some time discovering the hidden fossils and digging away! 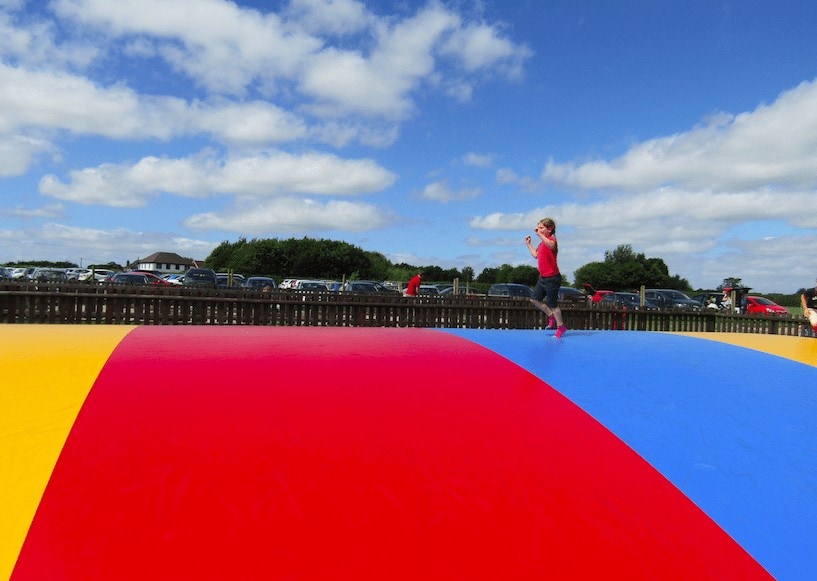 Next stop were the huge air filled pillows (which caused much hysteria with my two when Daddy joined in!) and the obstacle course before quickly making our way to the Sheep Racing. 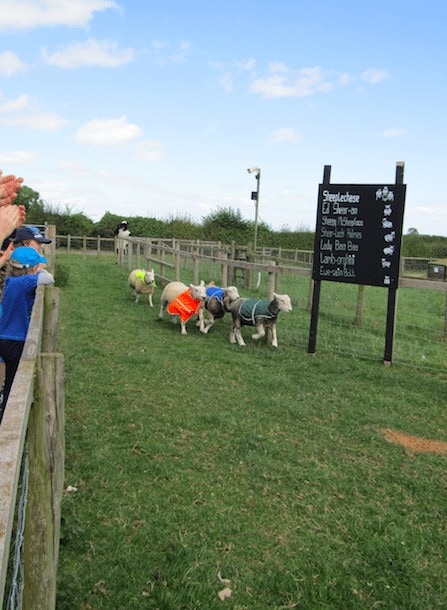 We chose our Sheep (some excellent sheep related puns in the names!) and watched the Sheep race for their afternoon feed before taking some time to explore the rest of the animals on show.

Little one was ready for a nap at this stage so we took some time wandering round the beautifully maintained kitchen garden before a quick go in the tractor pulled barrel carts and then while the toddler slept decided to head out of the heat to the soft play again. 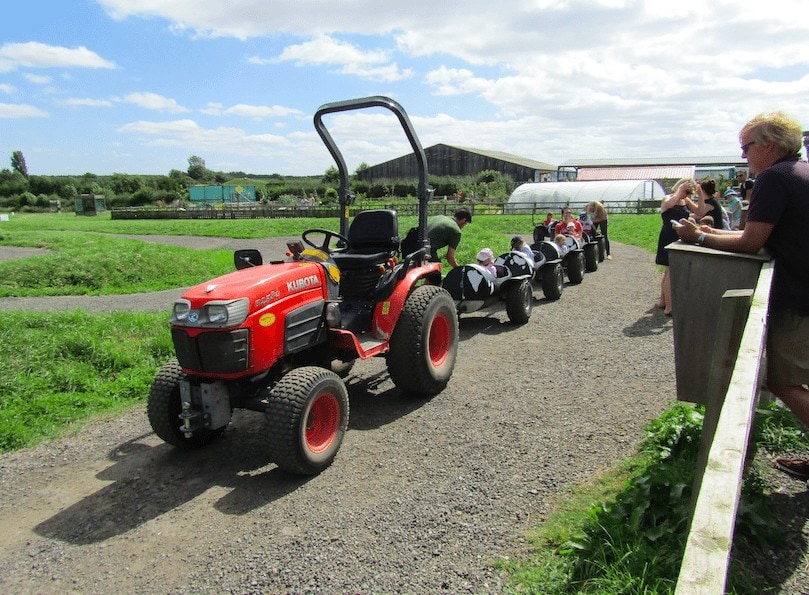 Our final stop was egg collecting. Again, a fantastic member of staff worked with the children to talk about the different chickens they had and all about the eggs, taking time to make sure everyone had a go. The staff really were the highlight of the day! This particular gentleman also helped us our by taking our rucksack safely to reception when he realised we had left it behind – that could have ended very differently! 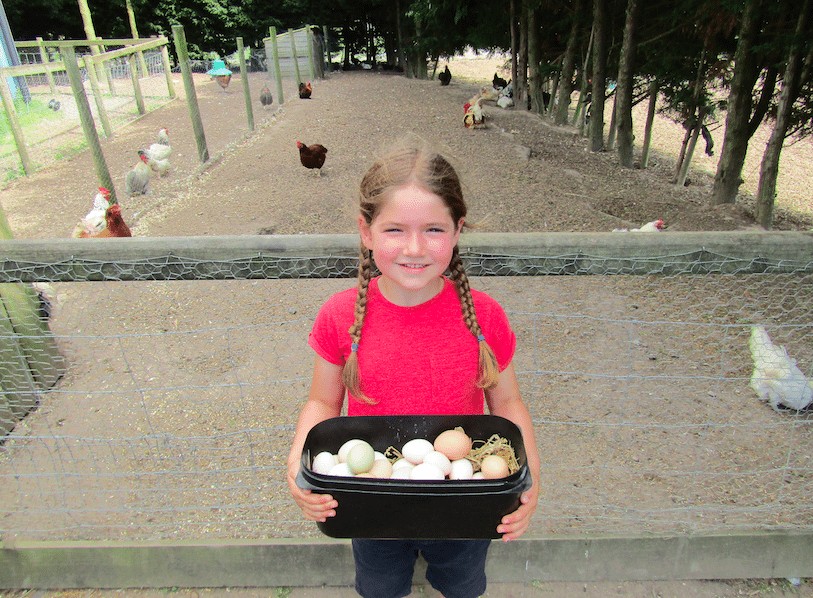 Overall I feel we have stumbled across a bit of a treasure! An easy journey from Shropshire down the M6 Toll, the National Forest Adventure Farm is certainly somewhere we will be visiting again very soon!

Fancy Visiting – Why not PIN this post for another time! 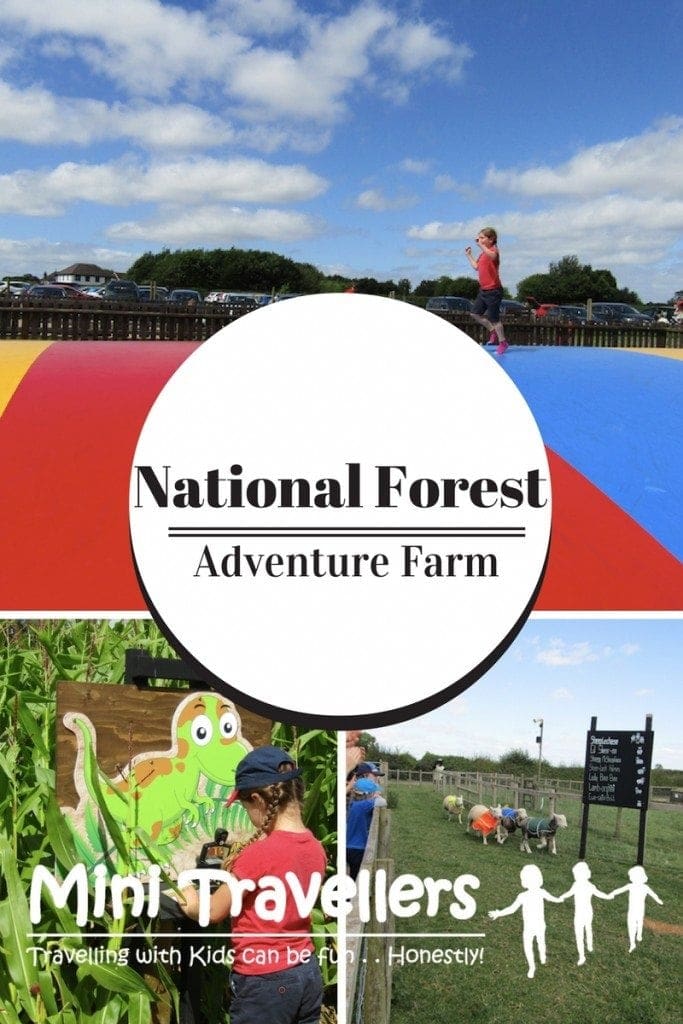 We love it at the national forest adventure farm. There is always something different going on each and every half term. They put so much effort into changing things up and it really shows! Sounds like you all had an amazing day!