This August Bank Holiday my wife, I and our three children were invited to attend the 25th Anniversary England’s Medieval Festival at Herstmonceux Castle near to Hastings in East Sussex.

We were delighted as it seemed just the sort of event our family would love: rustic camping and outdoor medieval-themed activities, and all set in the grounds of an amazing castle. We therefore decided to make the long journey from the North West and spend the full weekend enjoying the festival. Due to the distance travelled we decided to take up the option to camp for the maximum time we could – from Friday through to Tuesday – giving us 4 days to explore all that was on offer.

We set off very early on Friday morning and were fortunate to get a good run with the traffic . As we neared the venue there were numerous AA travel signs directing you towards the Castle and into the camping grounds. We arrived at the site just after the gates opened and were directed to the family camping section where we found a good place to set up camp. The campsite is in a large field on a hillside so arriving early meant we managed to secure a flatter spot close to one of the sets of portaloos and a fresh water tap. Perfect! Unlike other festivals we have attended you can park your car next to your tent/caravan/trailer tent while you set up and move it when you’re done, which makes the setting up process a whole lot easier. 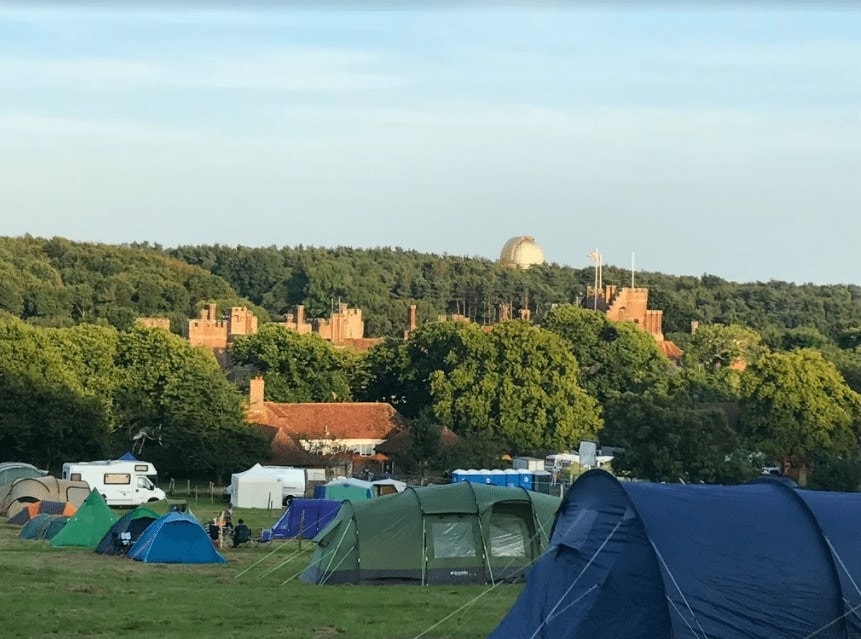 All unpacked we set off across the field towards the castle in lovely sunshine to check out what was going on. The festival was still being set up so we ambled around familiarising ourselves with the different areas marked on our map. Some of the market street stalls were open as were some of the food and drinks venues. The other attractions didn’t start until the Saturday morning which meant there wasn’t actually any rush to get set up and you didn’t feel like you were missing out on anything. In the evening the outdoor cinema was showing Brave so we took our camping chairs and warm coats down and spent a lovely couple of hours relaxing and watching the film before getting an early night to recover from our long journey.

We woke on Saturday morning to another gloriously sunny day (apparently it’s always like this down south!) and, as most of the events didn’t start until 10 am, we were able to take our time over breakfast and enjoy the surroundings before heading off to the festival. As we walked into the grounds of the castle a very large group of people in full armour and carrying weapons greeted our eyes. They were gathering for the Siege of the Castle. The children (and us) stared in awe! It was like we’d stepped back in time! Full of curiosity, we wandered along the now fully open market street with stalls selling clothing, jewellery, books, beautiful handmade fairies and all manner of medieval-inspired goods and made our way towards the front of the Castle where a large crowd had gathered to watch the reenactment. The loud beat of drums filled the air and anticipation rose as a procession of soldiers filed past and gathered in front of the castle. For the next hour we watched part 1 of the Siege totally enthralled. I had expected to see a few people with swords and shields crashing about. However, this was much bigger and better than expected and very realistic with gunfire, swords, shields, spears, battle axes, archers, and a Trebuchet. As the battle raged on the scene was expertly described over a tannoy system so everybody knew what was happening. The crowd cheered and booed to show their support for their side in the battle. After the siege ended we were delighted to hear the story would continue later that day.
We decided to pop back to the tent and have lunch. If you aren’t camping there are plenty of different places to eat and lots of outdoor space for having a picnic. After lunch we headed to the kids entertainment area and watched a fabulous show by Fool’s Puppet Theatre. After the morning session we made sure we arrived early to secure a good spot to watch part 2 of the Siege from. The afternoon show was as spectacular and loud as the morning and there was even more crowd participation, which was great fun. Afterwards we took the children to meet some of the participants who were camped around the edge of the festival ground. Everyone we met were more than happy to talk to us, show us their armour and their weapons and all the different things they had in their camp. Many people were using traditional methods of cooking and camping out as they would have done during a crusade in the medieval times. 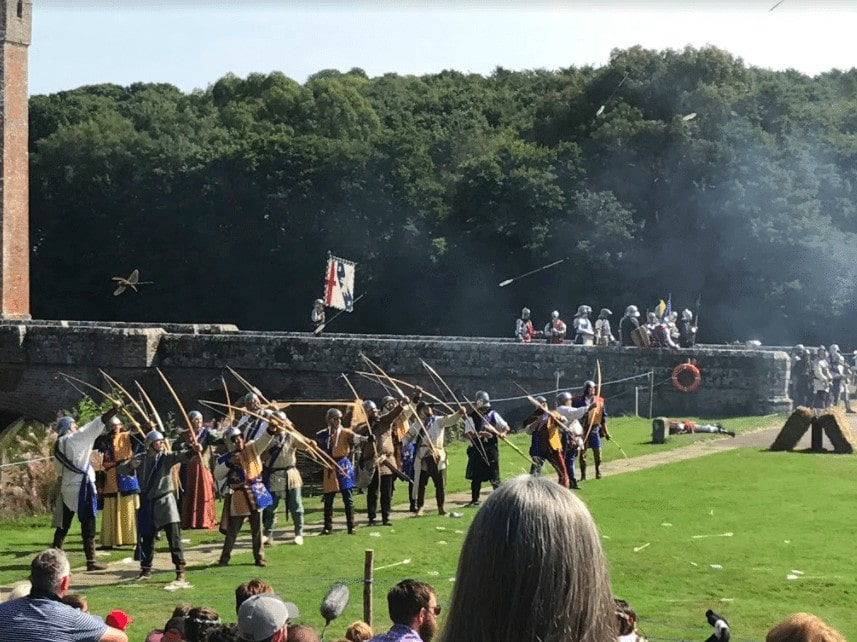 The afternoon entertainment comes to a close for day visitors at around 6.00pm. There is a break of around an hour and a half, perfect for nipping back for dinner, before the night entertainment starts for those who are camping. The evening began with a procession of actors, entertainers and campers from the camping field to the front of the castle. There the drummers and fire eaters continued to wow us all and afterwards there was a brilliant fire jousting display. Worn out, we carried the kids back up to the tent and put them to bed, after toasting marshmallows over the camp fire of course! We found that most people on campsite had either bought or rented a fire pit and we were invited to join our neighbours for a drink whilst we sat around their fire pit. The back drop of the castle against the starry night sky and the hillside dotted with campfires was beautiful.

We awoke the next day ready and raring to go! We knew that the reenactment would be the same show as the previous day so we were keen to experience some of the other activities and entertainment on offer. We watched the morning siege again (the kids insisted!) and then headed around the lake towards the main show ground and the jousting arena. Now as per the Castle Sieges the jousting wasn’t just people playing about! Men and women on horseback charged around the arena showing great skill to complete challenges that would have been faced by knights. They showed the crowds the deadly assortment of weapons used in battle by slicing, smashing and destroying a large number of watermelons perched on a dummy body (better than real heads but still quite shocking!). The show ended with the bravest knights in a jousting match. They hit each other hard with closing speeds of nearly 60 mph! Fabulous entertainment and the crowd loved it. 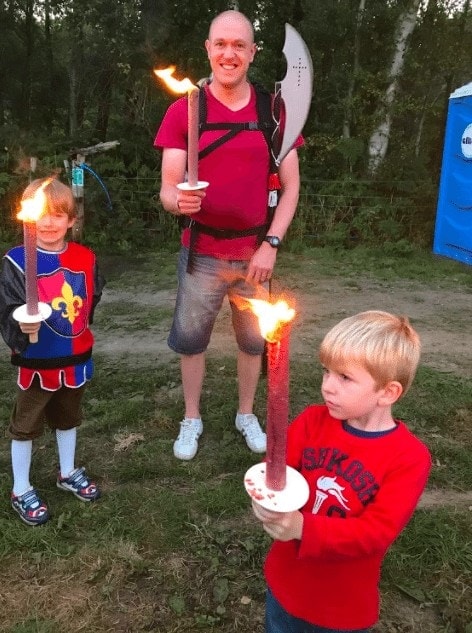 There is so much to do at England’s Medieval Festival, it’s probably easier to list some of our favourite bits from the rest of Sunday:
Listening to Perkelt, a brilliant folk band where the singer also plays the recorder at amazing speed. It made me regret not picking up the recorder since primary school!
The Mud Theatre which was very messy and very funny and enjoyable for all ages.
Having a go at axe throwing, spear throwing, archery, cross bows and, for the kids, riding on the country’s only mechanical jousting horse. These activities cost extra and are around £3 a turn, but they are great fun.
The living history village (a different area to the one we visited on the Saturday). The village is set up to show how people lived, cooked and entertained themselves in the medieval times. Within the village there were archery lessons, drumming lessons, make your own chain mail, basket weaving, amongst many other things. Everyone there was knowledgeable, passionate and above all welcoming and willing to spend time talking with visitors and allowing you to get hands on with things.
Another brilliant day ended with an even more spectacular torch lit procession from the campsite to the castle front where an even better fire show took place. We have never seen men riding horses that skipped over a skipping rope that was on fire! Later on, back at camp and with the children sound asleep, we were then treated to a fantastic firework display which we watched from our spot up on the hillside. 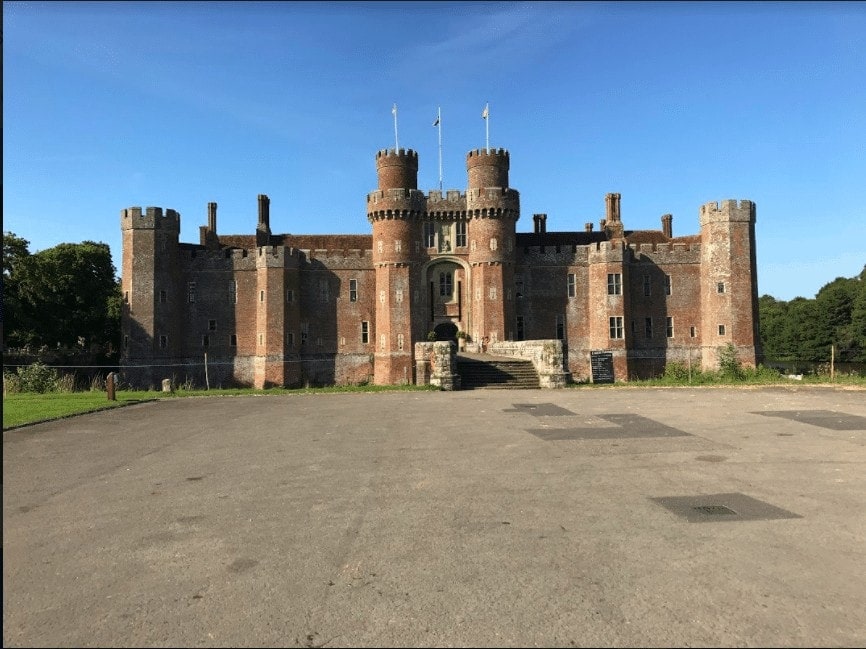 On the Monday we took the opportunity to make a quick trip to Hastings for old times sake in the morning but headed back to the festival for the afternoon. We enjoyed a slower pace to the day watching another puppet show, the magician, and the hilarious Devil Stick Peat, the jester! We revisited the market stalls for the children to buy souvenirs before finishing the day at the outdoor cinema for another kid’s film. All children settled in bed we sat around the campfire chatting to the new friends made and enjoyed a last look out over the festival grounds. We reflected on how nice it had been that children had spent all their free time when we were not in the festival, playing knights and princesses with their new friends and they had not asked for the iPad or TV for the whole weekend, in fact they seemed to have forgotten all about them! We were also amazed with how much we had all learned. Our eldest who is 6 is now totally hooked on learning about medieval history. 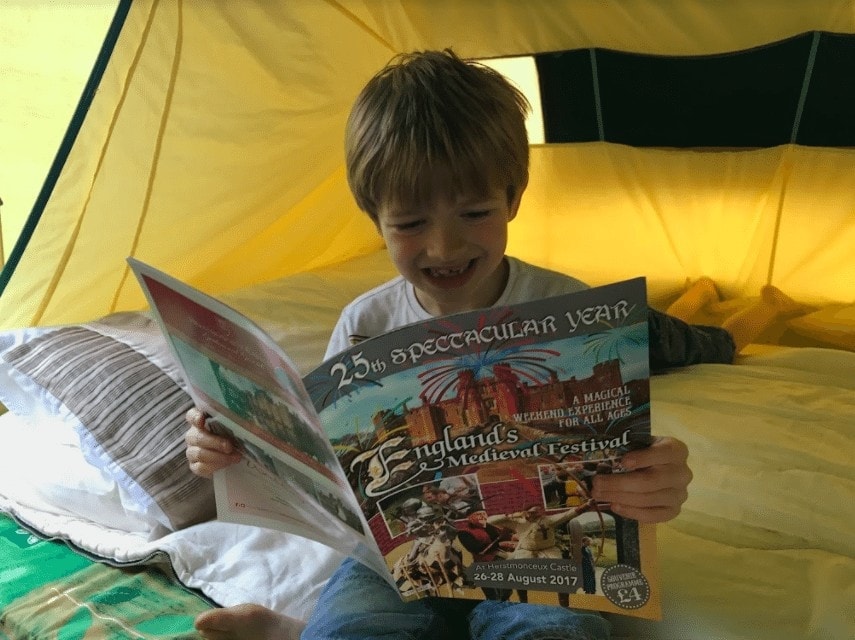 If you are looking for a unique, exciting, family-orientated festival then I don’t think you can beat England’s Medieval Festival. We’ll be back next year to meet up with our new friends and to see all the things we didn’t get round to seeing this time. We’ll make sure that we have our Medieval costumes and our newly bought fire pit too! 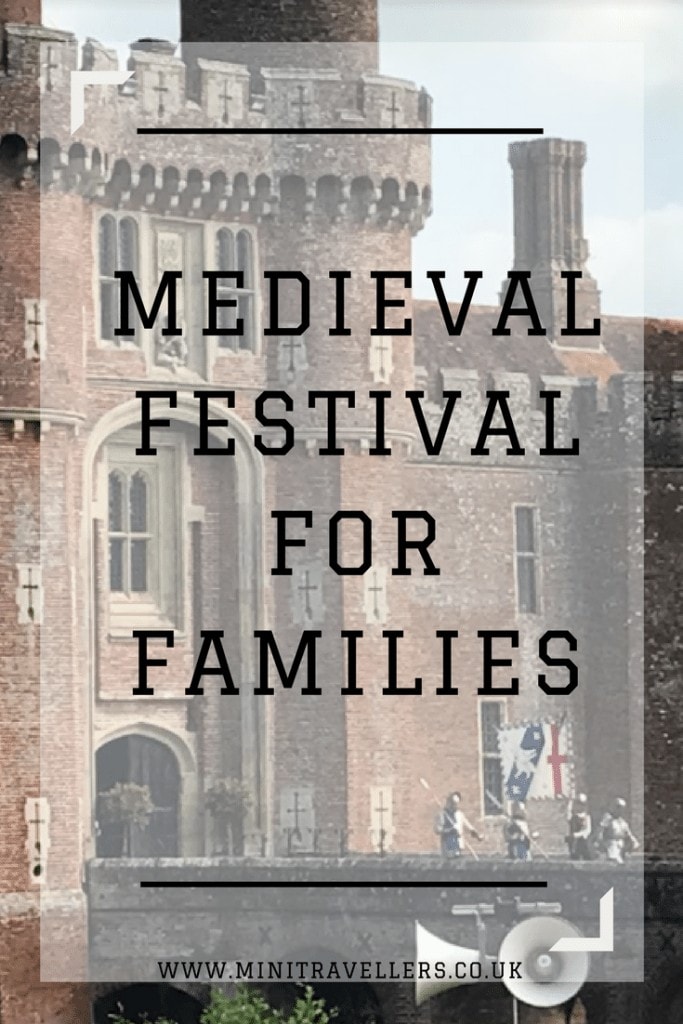 Wow! This sounds a really exciting event to visit. There's nothing better than being outside all day and having fun.