I took our three girls aged 4, 3 and 3 on a family day out to Legoland Discovery Centre on a Saturday morning in October.  When we got there at 10.30 the queue was mercifully short although the guy on queue duty did tell me that during half term the waiting time was a much as two hours.   “The horror!”

The main reason for the excessive queues appears to be the controlled way that they let people in 30 or so at a time.  What takes the time is that each group has to queue for a photograph to be taken (there are lots of photographs) before joining the queue for the lifts to go up to join the queue for the first “ride”.    We shuffled through the process and as we reached the front of queue three, child one of course decided they were desperate for a wee.  So breaking rank we headed off to find a toilet.  From the looks on the staff faces you would have though no one had every had the audacity to do this before! “What the toilet . . . .now . . . but your in the queue . . . . errr . . . . I think they are over there.”  This level of shock and incomprehension was nothing compared to the looks of sheer incredulity when we tried to walk back through the one way system to rejoin queue three.

The ride itself was OK but more suited to older children than my three (a theme that was to continue).  Shooting guns at video screens is a little beyond them but they loved sitting in the car and waving the toy guns around.  Oh and of course posing for the obligatory group photo.  After the ride we walked through a  display of lego buildings and headed to the main event. 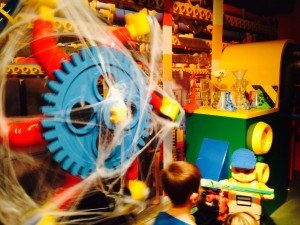 ….some 40 minutes after our arrival.  As the team were getting a little hungry the first port of call was the cafe.  I have to say this was very limited.  Other than paninis and some plain ham and cheese sandwiches that was pretty much it.  Everything served was in a packet of some kind.  There was some fresh fruit and at least the food wasn’t particularly expensive.

After lunch we dived in to the play areas which it has to be said were pretty small given the size of the space available. 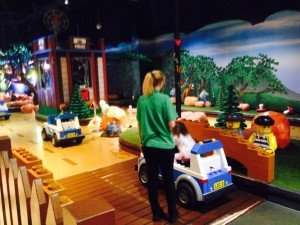 I would say at least a third of the whole are was taken up by a lego car race track where 6 battery powered cars could be driven by kids over a certain height.  We queued for a short while and child one was just tall enough to make it through and careered around the track for what must have been no more than five minutes.   Oh and of course there was a photograph!

After that it was off to find some actual lego!  As it was Halloween a bulk order of pumpkin coloured lego had been ordered and everyone dived in.  Again it was all a little beyond the girls and they got a little frustrated but there were certainly plenty of people around constructing all sorts of wonderful things (and a few dads getting a bit carried away!). 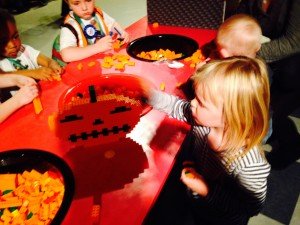 The build a lego car and hurl it down a track to its doom was a big fave though.  The girls loved it.  Whether it was the actual game or the more entertaining game of getting daddy to pick up the pieces and build the cars again I am not sure.  But they had a lot of fun.  For all you competative parents out there if you want a tip to win the races don’t bother putting the rubber tyres on the wheels.  Leave them off and its a win every time!!!

There is another lego building area directed more at girls but the area was more limited.  The big hit of the day was the “4D cinema”.  The regular views mean that you can pick your time and the team had a lot of fun with the water spraying from the screen and smoke coming out of the ceiling.  The pointy 3D was also fun.

After about two and a half hours we headed off to the exit.  Be warned its not the exit.  There was an underwhelming star wars lego exhibition that led to the place where you buy your photos, key rings etc etc.  At £9.00 each not cheap.

We killed two and a half hours on a rainy Saturday morning but what Lego Land has to offer is a little less than advertised in m opinion.  May be it’s more suited to kids who are a year or two older but I will leave you with a poem by Roger McGough that sums it all up rater well!

I join the queue
We move up nicely.

I ask the lady in front
What are we queuing for.
‘To join another queue,’
She explains.

‘How pointless,’ I say,
‘I’m leaving.’ She points
To another long queue.
‘Then you must get in line.’

I join the queue.
We move up nicely.

We travelled quite a way and too were massively underwhelmed. I was expecting a lot more for the price. We used vouchers in the 6 weeks hols and it was extortionate and had to go in that massive queue. I was expecting a bit more than what was all really just in 1 room that was packed. Next time we will just go to the real legoland!

Oh dear, it does sound a little disappointing and busy. Maybe as you say, slightly older kids would get more from it? Thanks for linking #LetKidsbeKids

Sounds like a big disappointment and that they're missing a treat. I'll have to remember never to go there when I'm in Manchester!

It's a shame it was quite underwhelming. I don't like how they insist on lots of photos just so they can try and make more money off you buying them! #letkidsbekids

I know it cost a fortune - shame!

Oh dear that doesn't sound like the best day out - hope you did at least get the reduced price by booking online. Glad the Lego car track went down well though and I do like how you used the poem to sum up your experience. My two are still too little for proper Lego so this wouldn't be a good day out for us for a few years yet.