Here’s our thoughts on Knowsley Safari Park close to Liverpool

I’ve wanted to bring the girls here for ages, but as we are members at Chester Zoo we always end up there if animals are what we want to do that day!

So when we were asked if we fancied a day trip to Knowsley Safari Park with a Go Pro to play with I jumped at the chance.

We looked at the website the night before and realised the park opened at 9 with the safari lanes opening by 10. As we had to be somewhere else by 5 we decided to get there as close to 9 as possible. Thankfully we actually didn’t get there until 9.40 as there really isn’t anything open at 9 apart from the little park which the girls did play on.

At 10 we got back in the car and drove over to the safari lane. This was for me the highlight of the day and in fairness to Knowsley what the day is all about. It wasn’t too busy and it was easy to drive round at your own pace. As we had picked up our new car last week we had checked out the map before arriving and had been reassured that there was a ‘car friendly’ option to avoid the baboons.

The beauty of a safari park over the zoo is the lack of bars. It’s fabulous to see the animals pottering around in wide open spaces. We drove through the deers and the camels and then came to the lions. This was what I had been waiting for. 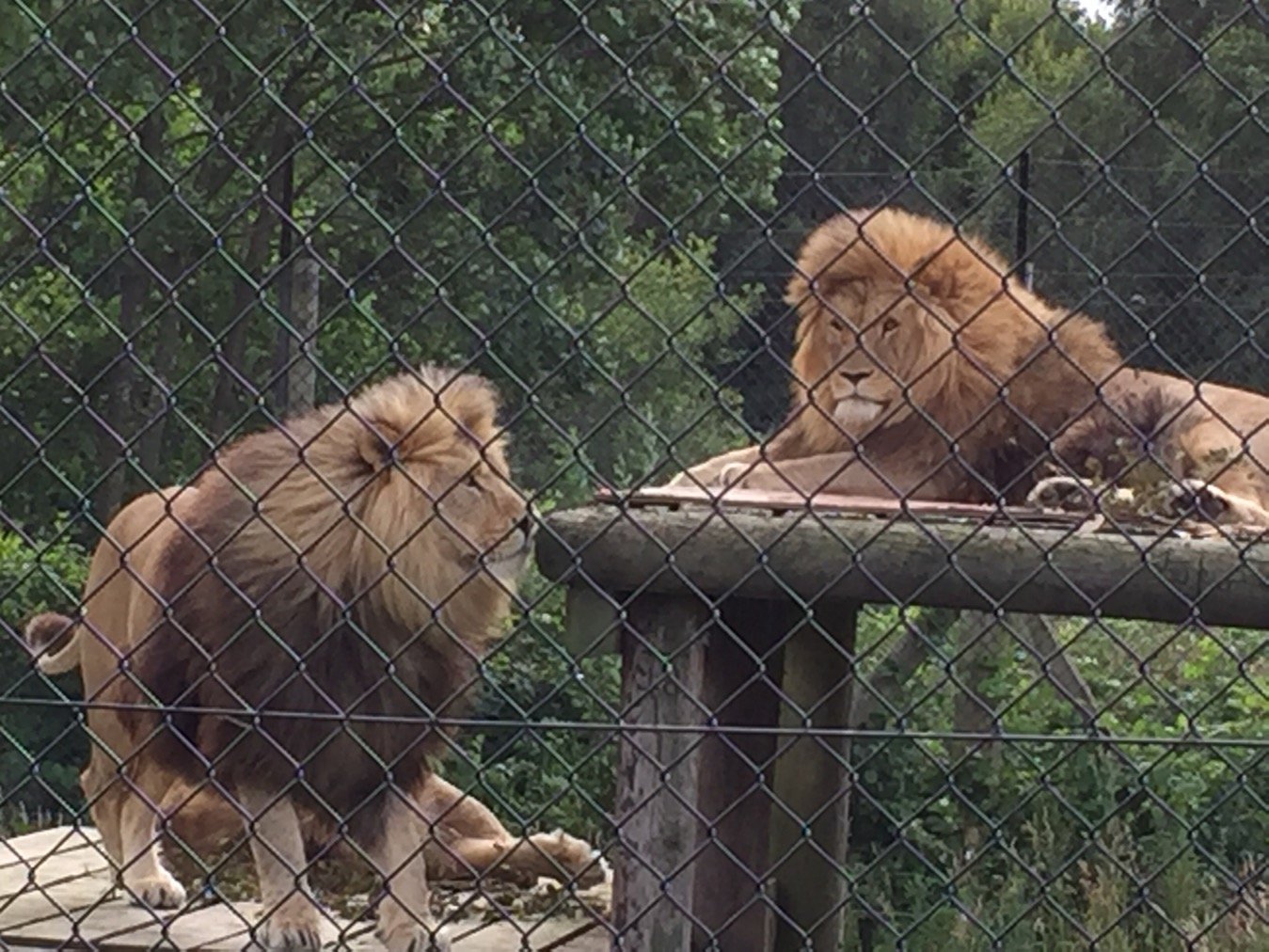 Initially I was a little disappointed that there was 3 huge lions soaking up the sun, but they were behind bars. This was however only the first part of the lion enclosure. We then drove into the double gated lion enclosure with large signs asking for the windows to remain closed and Knowsley staff making sure you did. In here we got so close to lots of lionesses and one rather large Lion.  Obviously the other 3 Lions needed to stay out of his way. 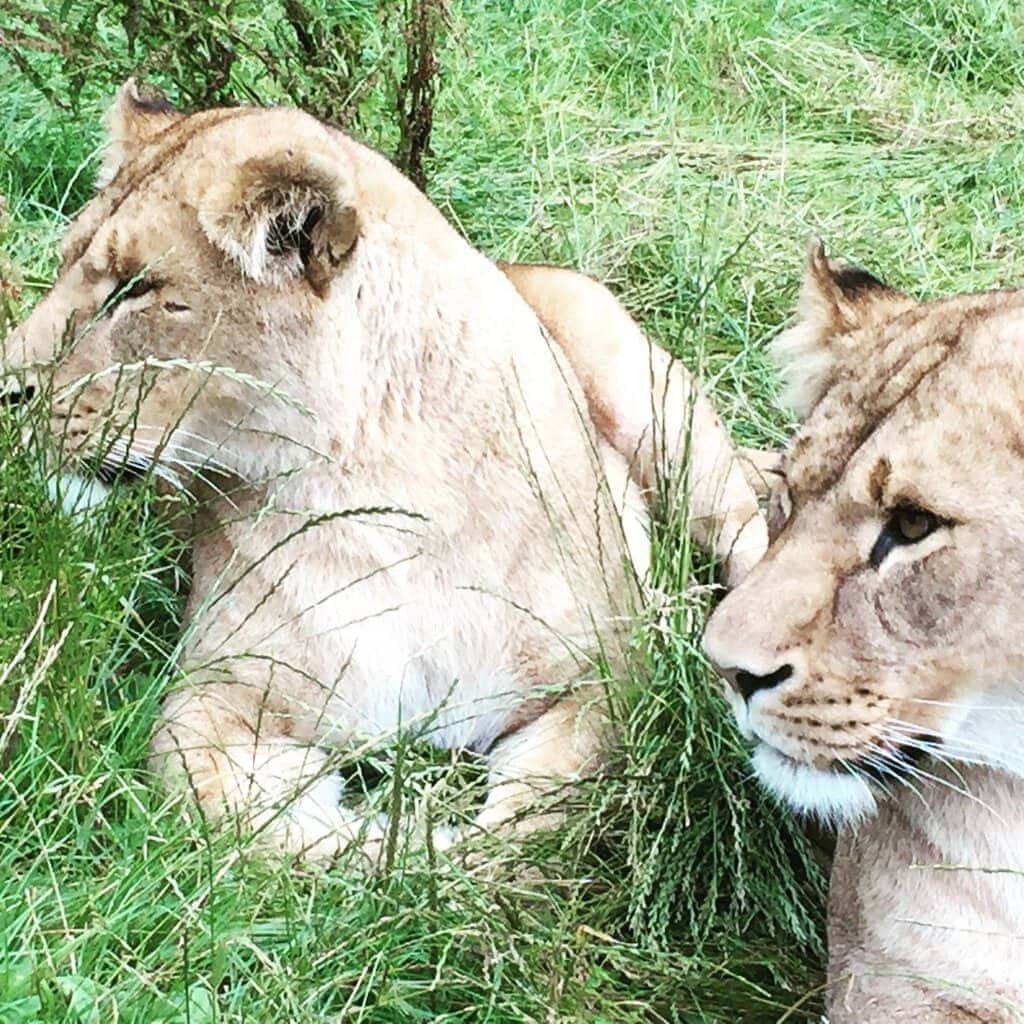 We stayed in this part as long as we could. I think I would have stayed longer but the girls were getting impatient. It’s tricky to keep them content in a small space.

More deer and antelope of various varieties followed and it was fantastic to see three rhinos chasing some deer and some zebras. We nearly had an ostrich pop his head through the window too! 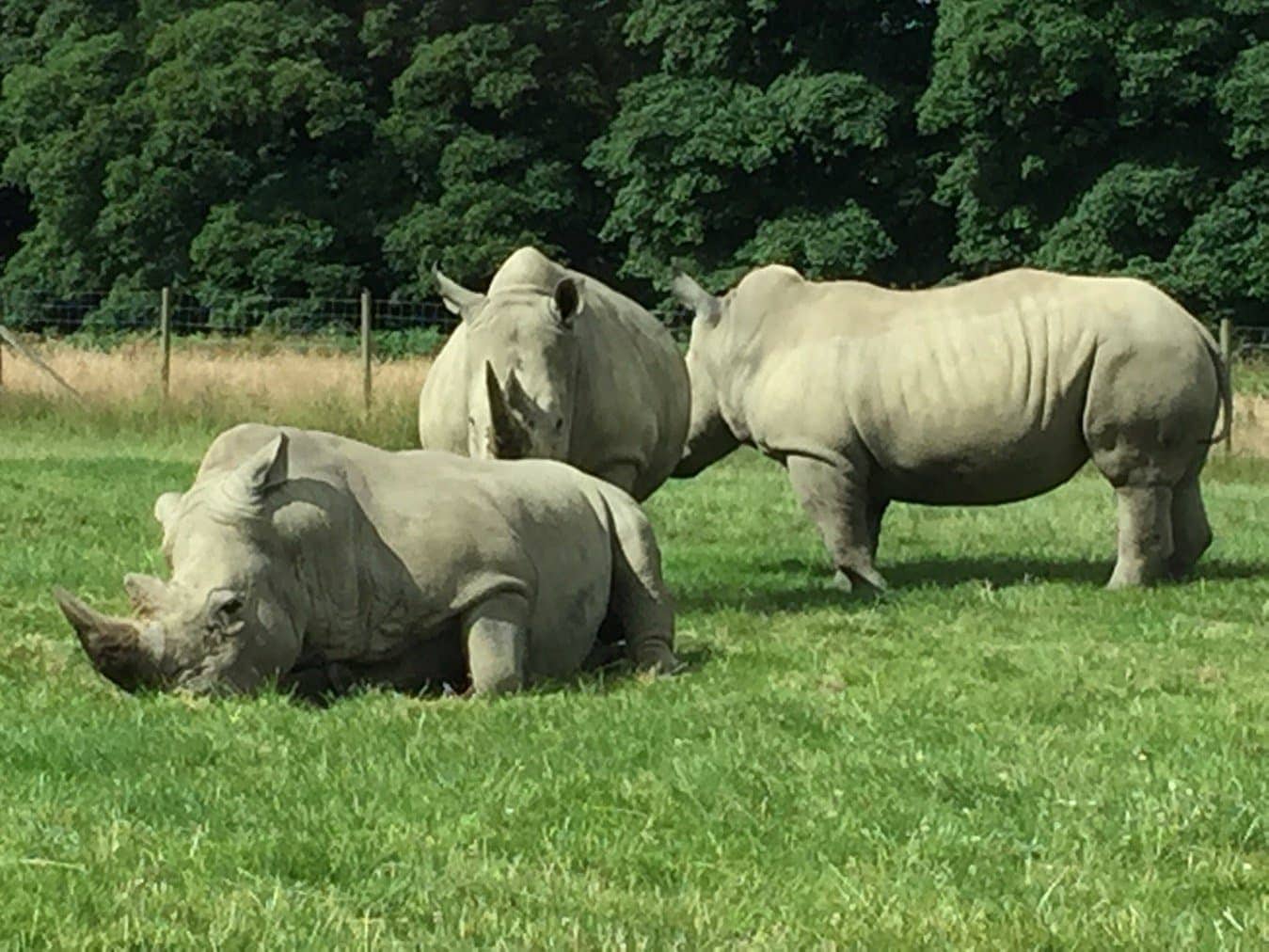 When we finished the safari drive we made our way back over to the main park area. It had probably take around 40/45 minutes in total so it was getting close to 11 by this time. My recommendation would be to visit Knowsley in the afternoon as it’s definitely set up for afternoon visitors. The first show started at 12.30 and there was limited things to keep them entertained between 11 and 12.30.

The giraffe encounter was disappointingly shut which was a shame as we had been wandering towards it telling the girls how exciting it would be to get up so close to them. We did like seeing the elephants though and they had a really good sized area to stomp round in.

The sea lion show was another highlight for me though. Half an hour is about the right time for my three to sit through a show. The sea lions clapped, balanced balls, pretended to be seals and sharks and jumped high to knock a large ball. The oldest sea lion was celebrating his 21st birthday and the youngest was just 2, it was really very cute. 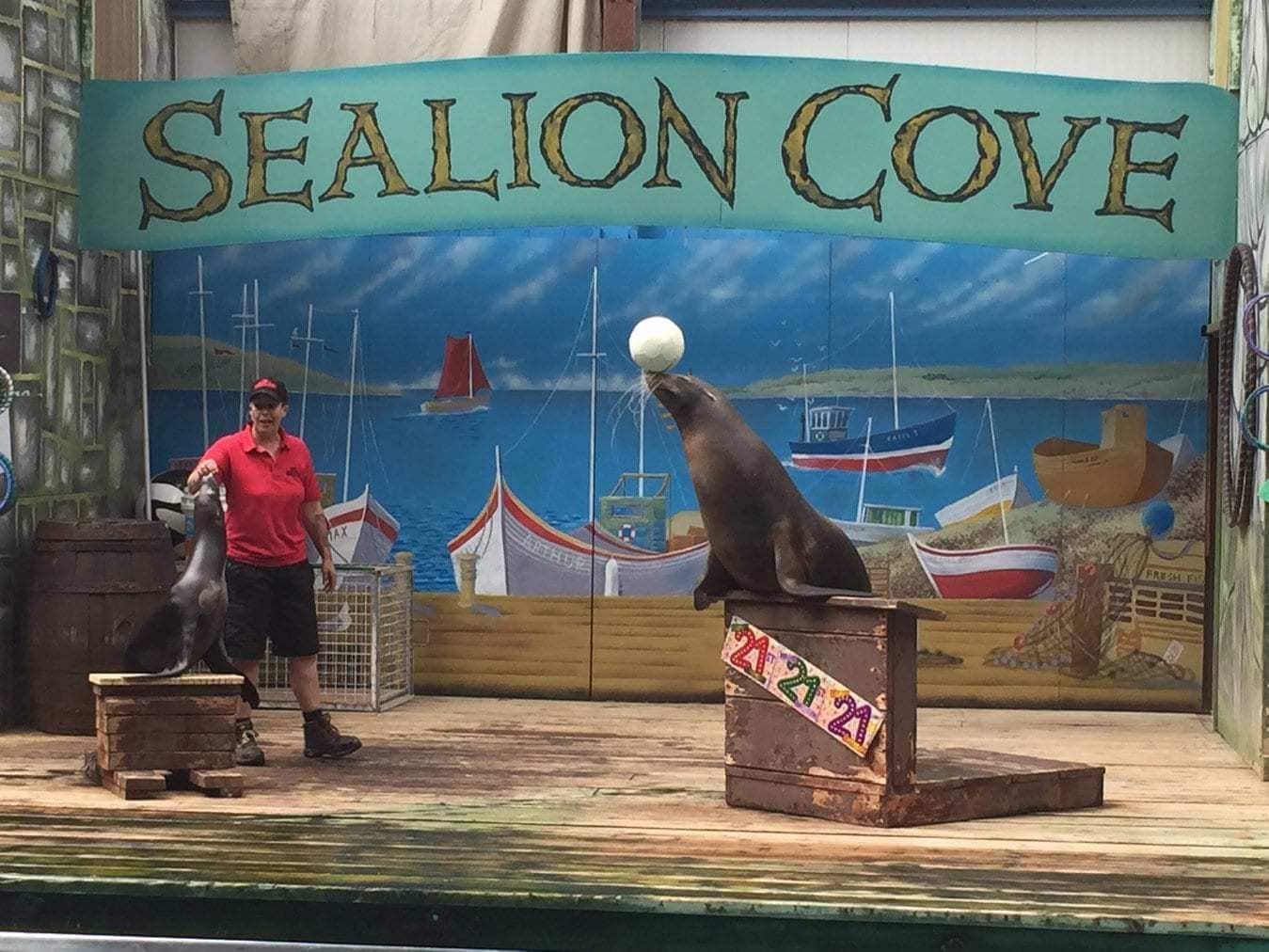 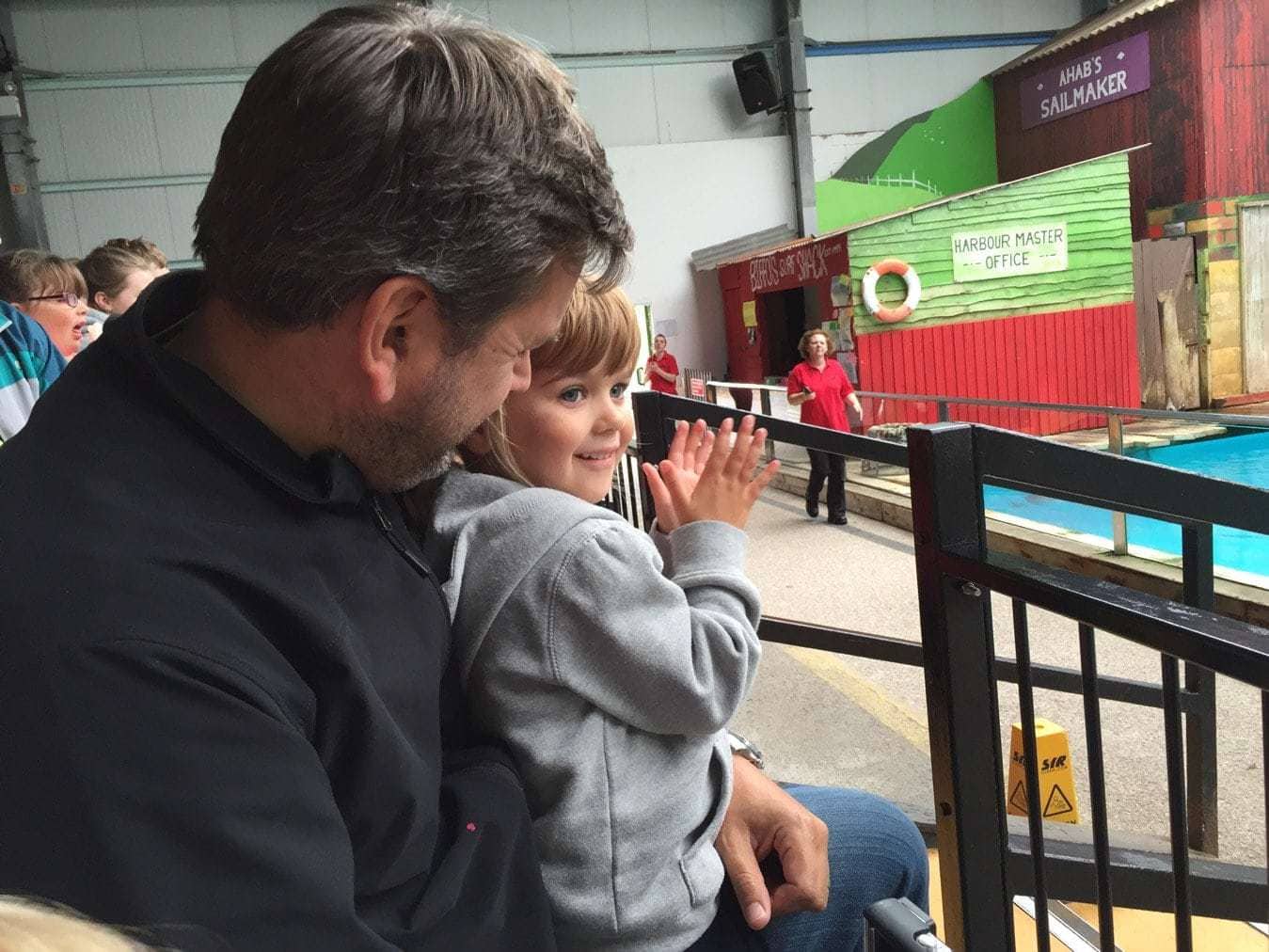 Overall the park is looking a little old, but effort has been made to add some newer touches in. The bathrooms are clean and fresh and there are new playground additions.

The girls liked the bat house and I thought the Vulture Feeding at 1pm was really interesting but the talk was a little over the girls head.

A pet hate of mine is paying to get into a park and then having to pay extra for rides. I think this makes it difficult for parents. When I’m visiting to review I try to only do what we would do if we had paid to go in. If I had paid to go in and booked online it would have cost us £54. If we had turned up at the gate it would have been £67.50.   I then wouldn’t have bought unlimited ride bands (£10 each child) on top of the ticket price. This meant that all morning the kids asked if they could go on the rides (and I said no) and at times they then declared the park rubbish. It wasn’t rubbish of course but it is frustrating to have to say no a lot and does make the trip less fun.  A fully inclusive price would have been preferable to me.

Seeing the lionesses up close.

Watching the baboons climb over other people’s cars.

Watching the sea lion show, particularly when the sea lion wouldn’t perform at the end. I liked the fact that they told us they didn’t/wouldn’t make them do anything they didn’t want to do.

Visit in the afternoon when all the shows are scheduled for.

Here is a little video of our day, mostly with the girls using the Go Pro so apologies for all the quality!

NB: We were provided with tickets to Knowsley Safari Park in exchange for this review, but all views are our own

Really useful tips - and it is amazing to get so close to the animals. You look almost on top of the lions! Glad to know about the sea lions too, that always worries me. #MondayEscapes

Ting at My Travel Monkey

I hate that when you have to pay extras for other rides inside - it should be in with the cost of an entrance ticket. It's funny how us parents notice the tiredness of places but for kids - they don't care. I think I would have liked the sealion show too! Great review. Thanks for linking up with #MondayEscapes

It looks great! I'm not really keen on safari parks but this one looks quite interactive and like you could actually get out of your car! ;) #MondayEscapes

This looks like such a brilliant place! I do love a safari park but we don't go to any where Rich would have monkeys/baboons climbing all over his precious car.... Thanks for linking up to #SummerDays

It looks great although I am really frightened of baboons so it would have to be the bus for us, and I love Giraffes so would have been a little disappointed by this. Great balanced review x