Find out how we got on at Kendal Calling with a 7 week old baby!

Before the arrival of our little boy, and in fact even before we decided to try for children in the first place, my wife and I discussed what sort of impact having a child would have on our life.

As ‘older’ parents (I am in my early 40’s) we have had the opportunity to see lots of our friends and acquaintances go through the transition from ‘a couple’ to ‘a family’ and we really admired how people can make the child part of your life, whilst still holding onto some of what made their lives enjoyable B.C. (Before Children). 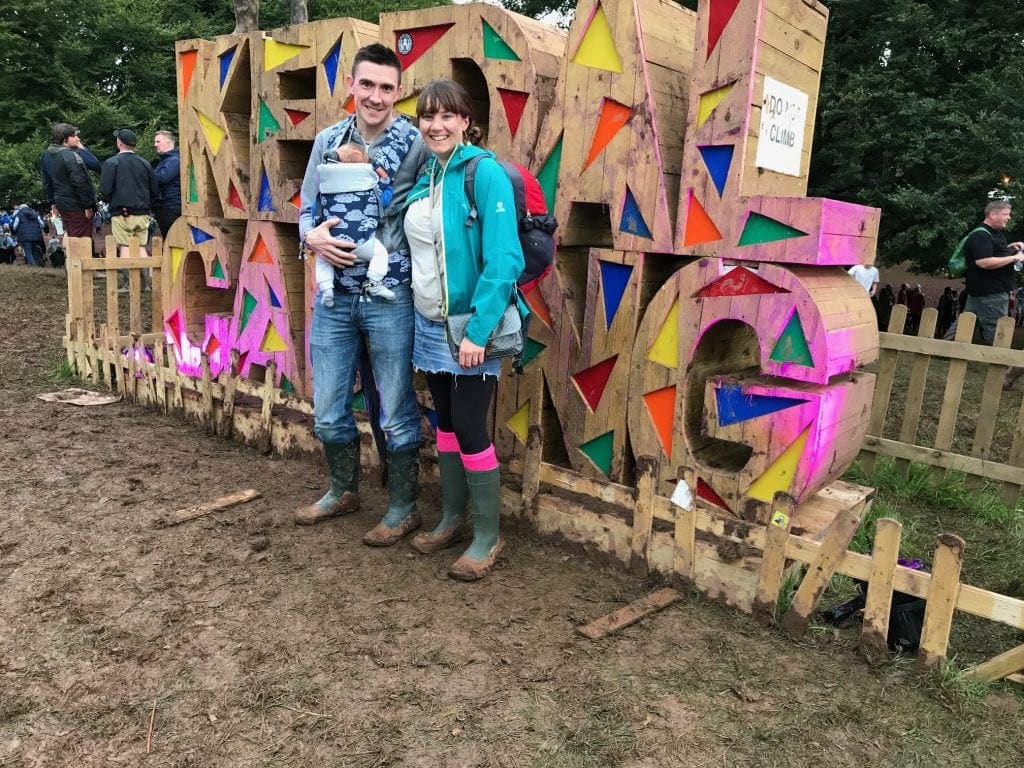 Inspired by this we were both keen on embracing all the new opportunities and changes that our little boy would bring, but also being conscious of ‘us’ and maintaining some of the aspects of our lives that we enjoyed.

Travelling and getting out and experiencing new things are two key aspects of our life that we wanted to partially hold on to, which brings me to the subject of Kendal Calling.

Kendal Calling is a summer music festival in the Lake District that follows the traditional British format – open air stages; stages in tents; a plethora of unhealthy food and drink choices; camping; and terrible toilets – all located in what is likely to be a muddy field or two.

It was something that some good friends were going to and had asked us if we wanted to join them. We did. The line-up was perfect for our demographic – Sterophonics and The Manic Street Preachers headlining were a blast from my younger Indie days – and B.C. we wouldn’t have even hesitated.

But could we go now that we have a 7 week old baby boy? Was this a step too far in trying to do things that ‘we’ enjoyed?

If you do a bit of searching on the internet you’ll find a number of reviews and views on this specific festival and this article isn’t intended to be a detailed view on the festival itself though I will touch on certain aspects. 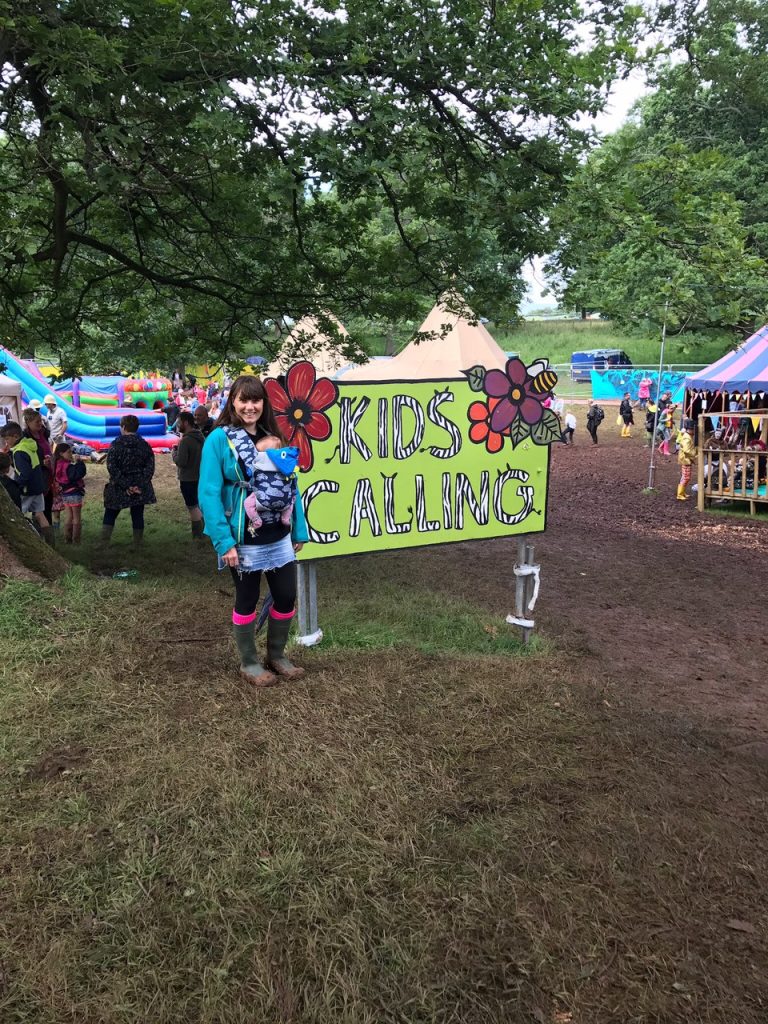 It certainly aims to have a more family friendly side to it, having specific ‘free’ tickets for the under 5s and a specific area calling Kids Calling with activities etc for children. But in all honesty, this isn’t of any use to a 7 week old – though it could have been improved by the provision of a specific baby changing area/tent.

Before arriving, our initial view was this event was simply too soon for us. I am not a “happy camper” at the best of times, and the thought of doing it with a 7 week old was unthinkable (those that are camping experts may have a different view of the art of the possible here). Thankfully we had the fortunate position of having access to a friend of a friends house for the weekend close by meaning that we could travel in and out of the festival each day. 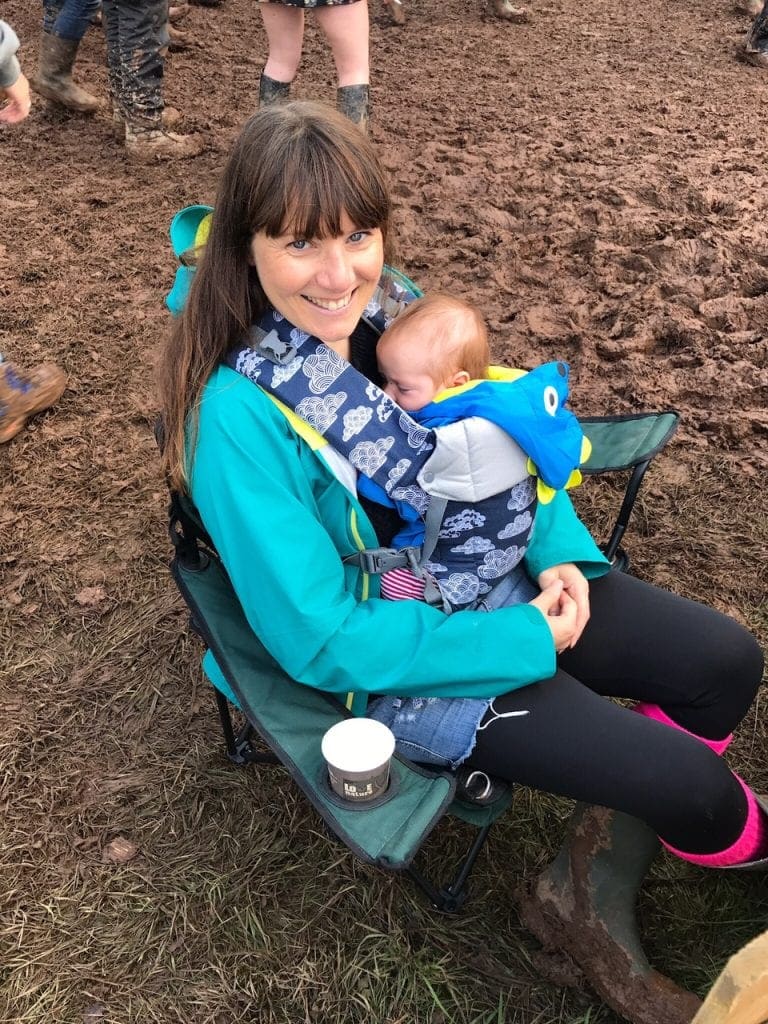 With that in place we decided to give it a go.

We had planned on using our Bugaboo Buffalo pram for the weekend as it offers an “off-road” capability, but the amount of rain that had fallen in the preceding days meant we decided to use a sling on the first day and see how the site was.

A very wise decision as the access to the site and the arena itself was a quagmire of squelchy mud – I am pretty certain the pram wouldn’t have come back alive. There were some people with pushchairs and trolleys on the site, but seeing them push then around reminded me of those World’s Strongest Man contests when they are straining to move cart full of beer barrels! 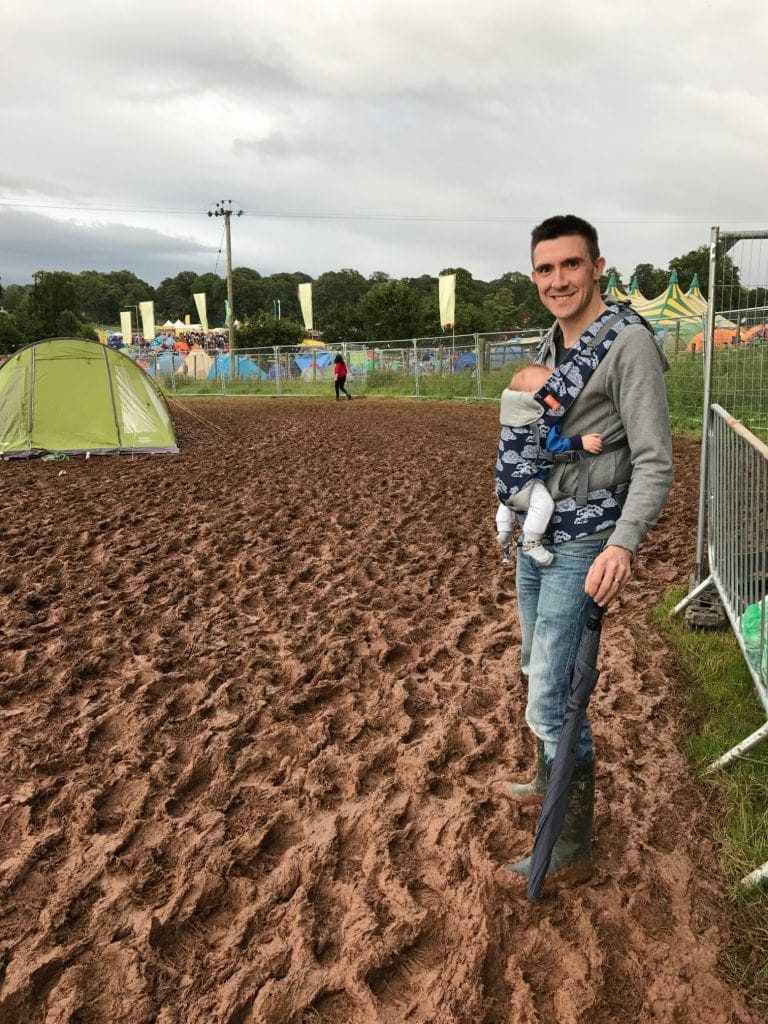 In fact the sling (we used a Beco Gemini – very impressed with it) was a breeze. It meant that we could move around easily, keep a close eye on him, and help keep him warm if it got colder later on in the evening. We added a battery powered set of LED lights (thanks Amazon) to ensure that people saw him at night and didn’t accidentally bump into whoever was carrying him – it also helped him blend in with some “festival chic”. The only downside was the lack of storage space a pram gives you, but a well packed backpack compensated nicely.

One thing that quickly became apparent is that taking a very new baby to a festival means that you are going to get attention. Lots of it. And if you are like us, and were slightly nervous about whether this was a good idea or not in the first place, that can present a challenge.

That is because you need to be prepared to be judged. Which as new parents can be hard, because you do enough of that to yourselves without the added pressure of others doing it for you. 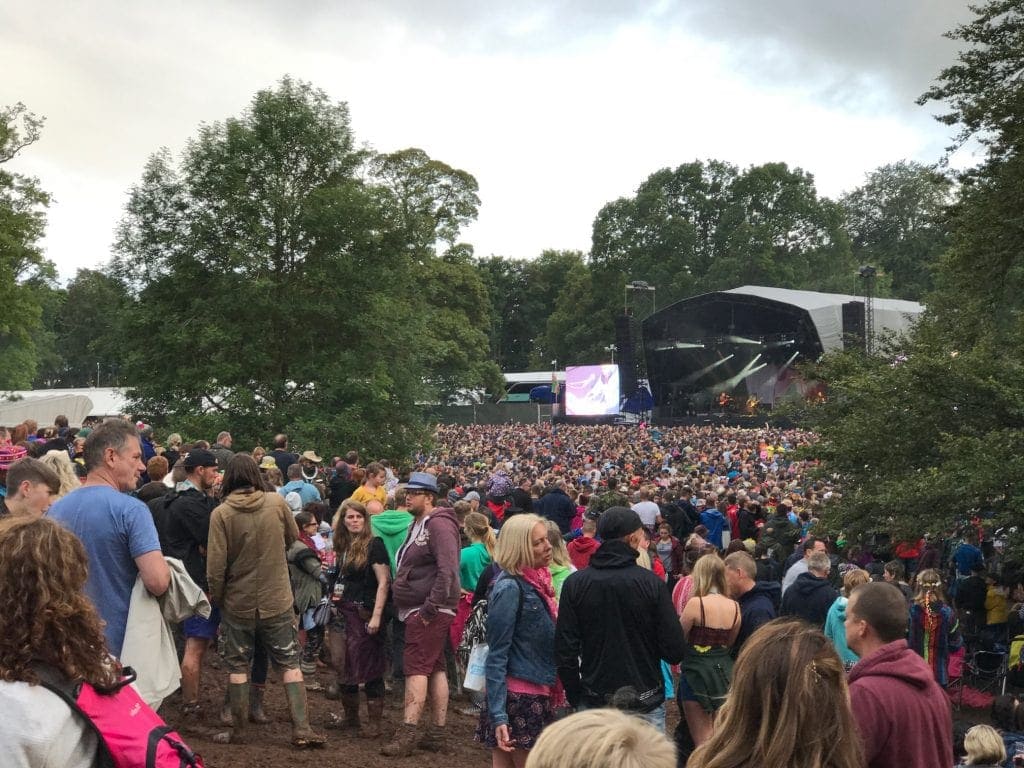 On the whole the interactions were positive. People would come up and ask how old he was, and say things like “Good on you”, or “that’s amazing – well done”. The staff on the gate even gave him his own wrist band! But be warned there will be a few people that will judge you – we experienced a few disapproving looks, and the odd negative comment throughout the weekend. Thankfully the former far out-weighed the latter and you can certainly end up feeling like the champion of newborn parents by the end of it.

As already mentioned, the festival definitely tries to appeal to families, and there are certainly a reasonable number of them at the event – mainly with children in the 1-4 age group. In fact on the evening of the first day we found a small number of large oak trees to the back right-hand side of the main stage, where an informal crèche was in full swing.

This area was great. It helped you not feel like you were a terrible parent for bringing a child to a festival (the strength in numbers effect), and it also gave you the space to feel confident to feed (we’re breast feeding which does make things a lot easier) and change him (on a quick-chair). Whilst not an official area, I think it is a regular “feature” and one which provides a great place to watch the bands with your little one. 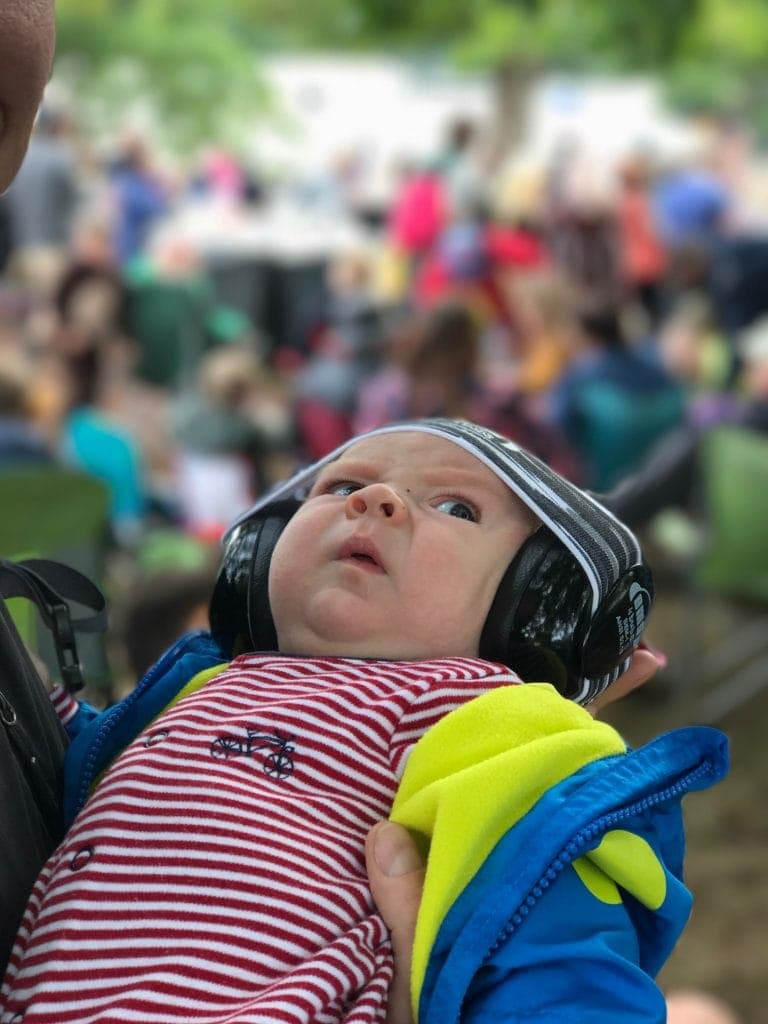 Noise level-wise, its far enough away that you might be within the unofficial rule of thumb that “if you can have a normal conversation, its not too loud”, but we and some other parents in the area made doubly sure with the use of some ear-defenders. If you have a new born, then be careful to get ones that don’t put pressure on the fontanel – we used the Ems for Bubs Baby Ear Defenders – that worked well for the most part, though I’d recommend practicing with them a few times beforehand (especially in the sling).

Another aspect that we were concerned about was the toilets. They are never great at festivals at the best of times, but Kendal Calling does offer the option of paying for “posh toilet” upgrade. It’s not a cheap option and the locations aren’t that useful and the quality not that different, I think you are better off using the normal ones. In fact after taking advice from some of the event staff, we used the accessible toilets and had him in the sling when we went (my wife is a fan of using a she-pee at festivals which worked well).

As the evenings main acts start to draw to a conclusion you start to see a procession of families getting ready to leave before the actual end.

Given the state of the muddy access paths I can understand why. I wouldn’t feel confident with a baby or young child negotiating an exit amongst the massed throngs of revellers – even with a golfing umbrella as a make-shift walking stick.

We did the same and made the relatively short 15 minute walk back to to car at the end of each evening – it does mean that you get to hear the last few numbers of the main band on the wind as you make your way through the car-park; a completely acceptable compromise for being able to go to the event with our little boy.

Overall on reflection, we enjoyed the festival as we would have done B.C. In fact doing it with our newborn brought a new and positive experience to an activity we had done many times before and made it feel like our first family adventure. The nerves, uncertainly and self-doubt that we felt at the start passed, and as confidence grew we relaxed and enjoyed the weekend. 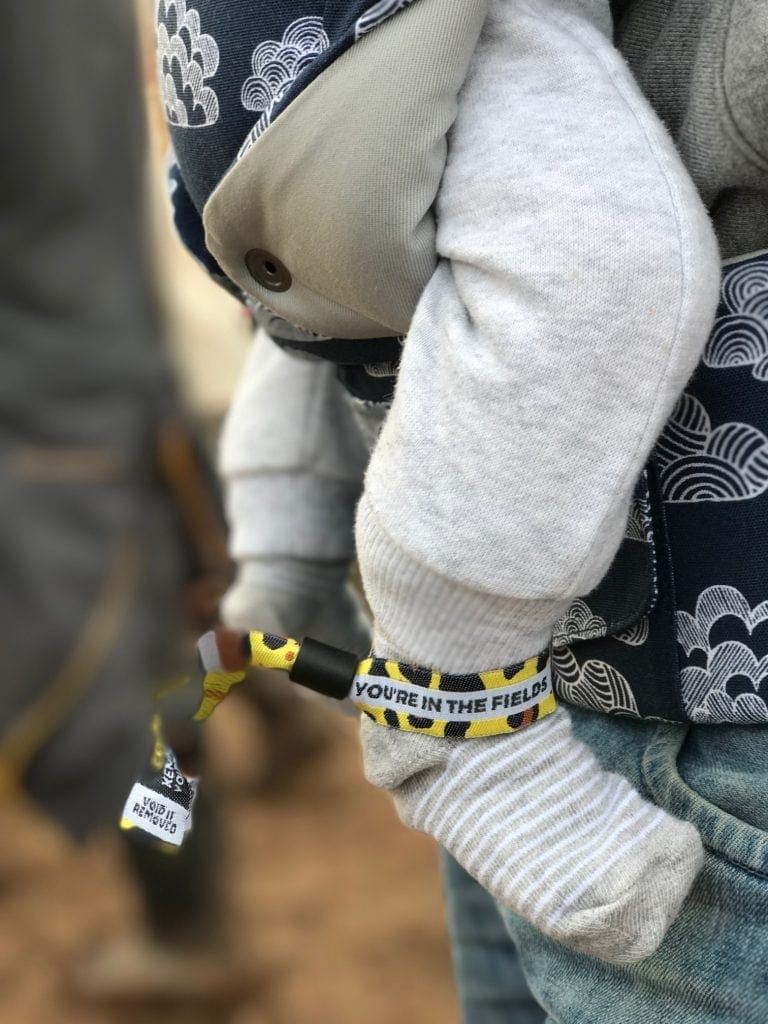 Would we do it again?

NB: Nikki & Rew paid for their own tickets to Kendal Calling and simply submitted this review to explain to others how it went! Thanks both.