This year, the Geronimo Festival took up a new residency at Arley Hall in Cheshire. Having only ever visited Arley Hall for a (rather lovely) wedding, we were interested to see how this year’s festival differed from last year (our review for last year is here)… 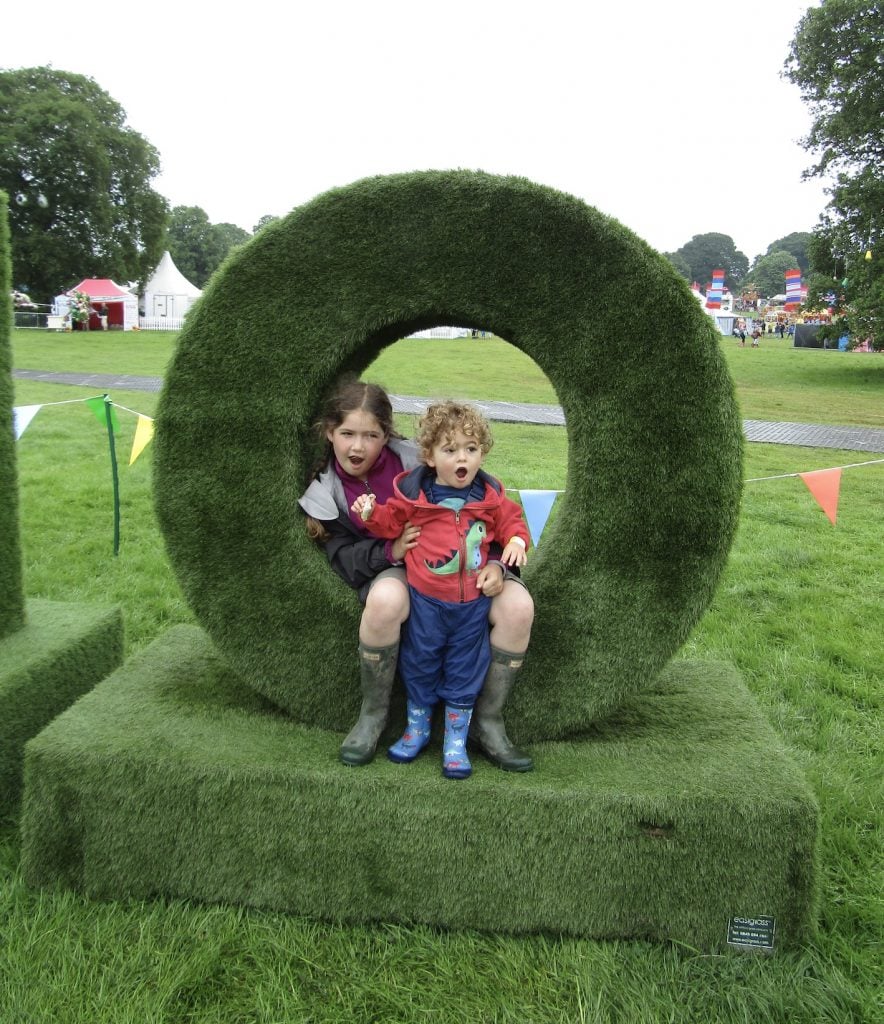 Arley was a little further away for us, about 15 mins more travel from the motorway than last year when the festival was located at Tatton Park. However, the post code took us there without a problem and the site was well signposted and supported by lots of staff so we were quickly parked up and ready to go. One bonus for this new site was that there was ample parking directly opposite the entrance – we found the walk from the car park to the site at Tatton rather long with two little ones – especially at the end of a long day!

We entered the site quickly, despite the additional security. Following the recent tragic events in Manchester the weekend before the event the Festival organisers had been quick to publicise there would be heightened security and we certainly saw lots of evidence of this and felt very reassured… 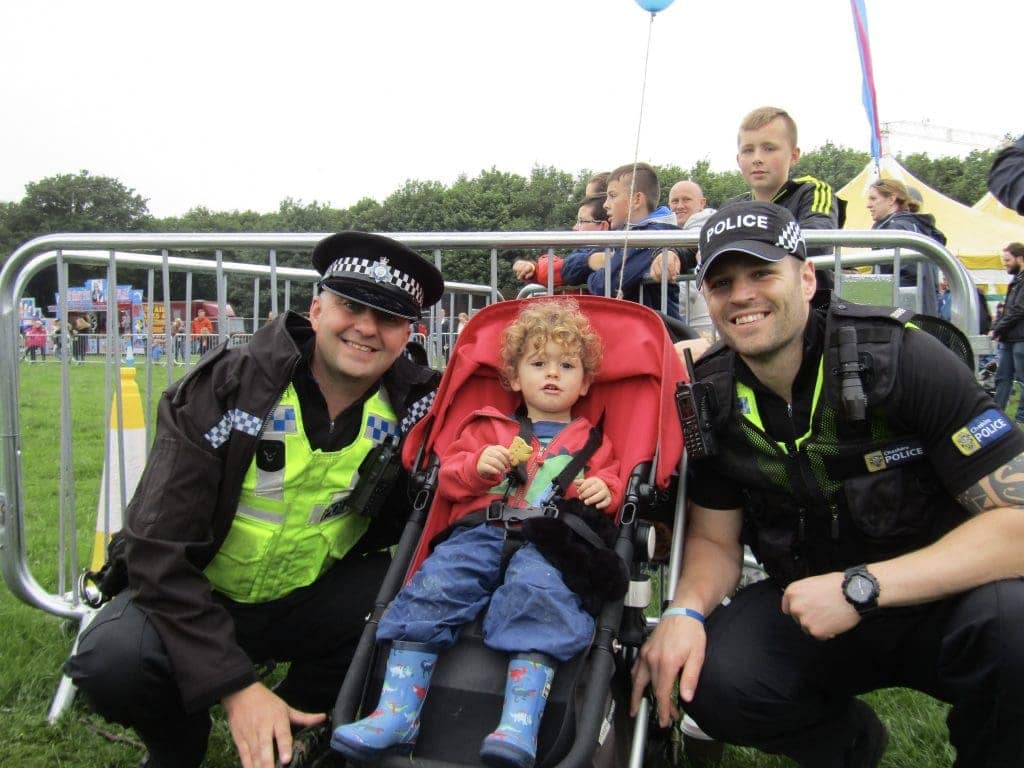 This year, we had the push chair as backup but allowed our rather independent toddler to ‘roam free’.   Although this new found freedom was a little daunting for us parents, the whole site was rather well spaced out so we found we could let him go off a little in front, and the site never seemed crowded so we had no worries about losing him all day!

Our first stop (while Mummy searched out the all-important coffee!) was the Ape Project. Here, children were encouraged to get ‘hands on’ and join in with creating a fort. Both children immediately got stuck in and my eldest was particularly thrilled to have a go at using hammer and nails…one thing to note here was that the children were also encouraged to paint, which meant a great deal of the structure had wet paint on it…Although both children were dressed to get wet and muddy, we weren’t anticipating paint (and didn’t see any warning signs) so straight away both kids waterproofs were completely covered…not particularly impressed by this and perhaps an area to re-think for next year. It took quite a lot of effort to get the paint out of the waterproofs (and a wash with a specialist soap to get them ‘waterproof’ again…). 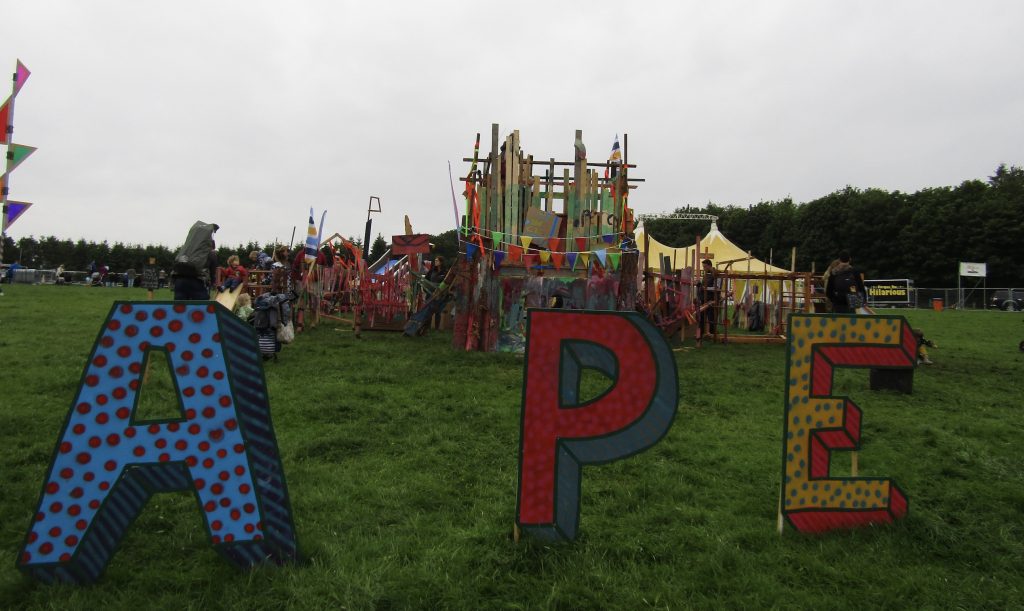 Onwards and upwards…the next thing that caught the eye of my car-crazy boy was a stunt show. The arena wasn’t central here (as it was at Arley) and so I think we perhaps missed out on this area of Geronimo this time – it was much easier to get drawn into what was going on in the arena when it was at the heart of the festival…we happily snacked and watched the antics before heading off to encounter a dinosaur and explore the rest of the festival.

The weather was poor so we enjoyed time in the drumming tent (great for both my two aged 2 and 7) and watched a couple of the side shows before being drawn into the main performance tent to watch a magical comedy act from Carl and Dave (Edinburgh Fringe Winners), a great example of the acts at the festival which kept both kids and parents alike entertained!

At this point, having put off the inevitable for long enough, we were forced to encounter the fair…now having followed the Geronimo social media pages, this was a bit of a sore point. Whereas the festival last year pretty much included everything free of charge, this year, a decision had been made to charge for the fair. Families were encouraged to purchase tokens which worked out at £1 a ride. I think this is an area that might need to be reconsidered for next year as negotiating rides with kids (which of course, had no queue because of the charge) put a bit of a cloud over this year’s event. Talking to both other parents and the ride owners themselves, this seemed to be a common theme…

Our next stop was the Tumble Tots tent where again, a fantastic obstacle course had been set up which both children thoroughly enjoyed! 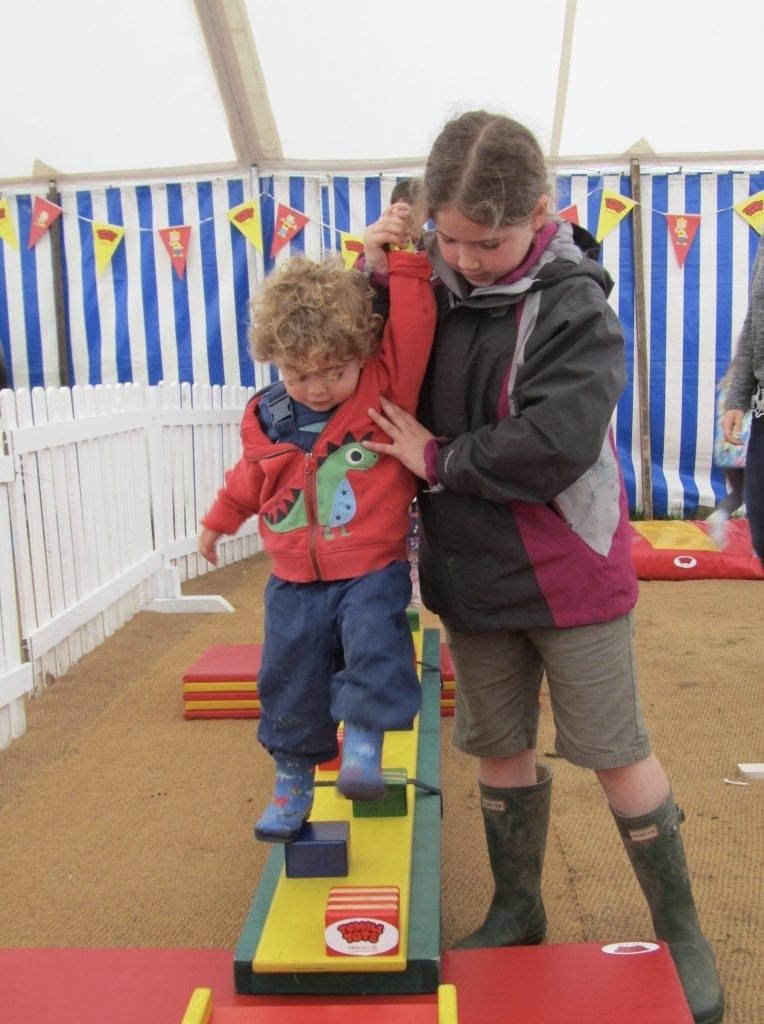 We were all flagging at this stage, having grazed our way around the site and not stopped for lunch. The final stop for us was the Play City sponsored by Petit Filous. In this undercover canopy, children were encouraged to create anything they wished with the help of cardboard, tape and lots and lots of stickers! There were also comfy chairs around the outside which was just what the parents needed at this stage. We ended with a welcome (free!) snack of Petit Filous and headed wearily towards the exit – both children were asleep pretty much straight away! 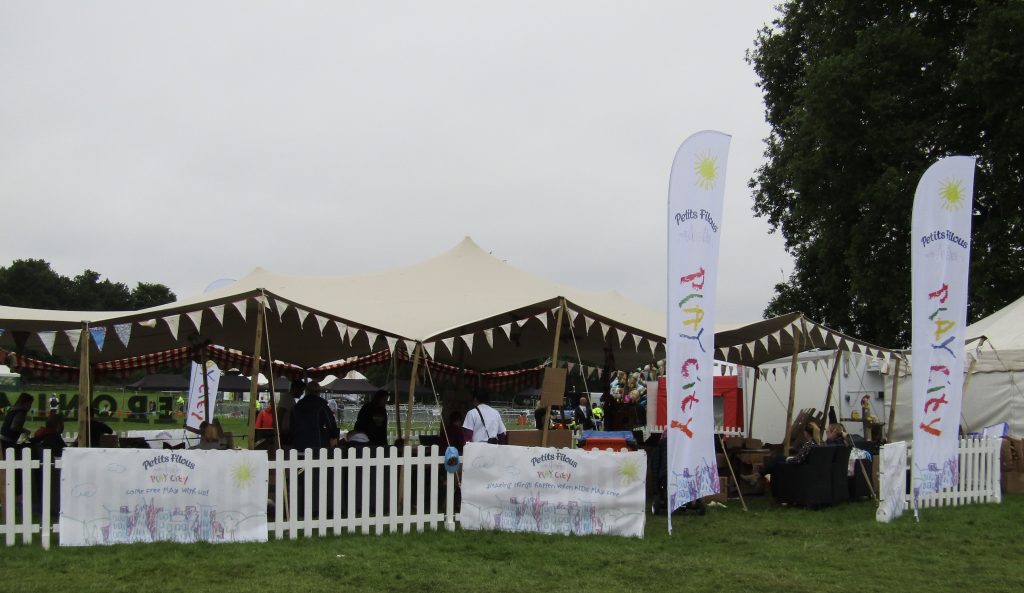 The new site definitely makes the festival seem more spacious due to the ability to spread out over a wider space. This did have its advantages in that the festival felt far more spacious this year and I felt less worried about losing the children! Although the festival offered the same big named acts from CBBC as last year, this didn’t become our focus this time (we spent a whole day watching Hook and Line and Justin Fletcher last year!). Perhaps that was again that due to the festival being spread out, we just didn’t pick up on the activities on the main stage as much as we did last year. There was also an option to camp this year but with the unpredictable weather and not really seeing much advantage in camping (couldn’t see much on offer in terms of early access etc. or other incentives for campers) we decided to give this a miss…

Geronimo was another great day out and we are certainly hoping to head there again next year. It will be interesting to see what form next year’s festival takes…it would seem a balance between the two years is needed so we will watch and wait with interest!

NB: Rachel received tickets to Geronimo in order to review but all views and opinions are her own.