A fab blog post about a family holiday to California by Jess who writes a blog called Cuddles and Cocktails(possibly the best blog name ever!).  You can follow Jess on Instagram here or on Twitter as @cudsncocktails here.

So the plane journey was looooong. Long for a mid 30s woman with a terrible and totally irrational fear of flying. But even longer with a 2, 8, and 9 year old:/ Whatever possessed us to go so far for the summer holidays??? Well actually, when searching through last minute deals it was cheaper to fly to California, stay in a 5* hotel, car hire included, AND do the whole Disney thing, than it was to go to Greece? Go figure?

13 hours later, with 3 tired and very grumpy kids in tow, we finally managed to make our way through the horrendous LA traffic, to arrive at our hotel. We stayed at The Hyatt Regency in Orange County, about 2 miles from Disney and 20 miles from the nearest beach, which suited us perfectly. The hotel was fine, not amazing, but it did the job. My initial feeling when booking, was that it was quite a ‘business’ hotel. I was right. They had endless conferences going on during our stay, with delegates flown in from around the country discussing how they could become more ‘at one with themselves’. That was fine, quite entertaining actually, earwigging on their rather random discussions!

The rooms were great however, with a dividing door in the middle, the kids suite featured a giant bunk-bed and we got a little separation with our own separate room. Naturally we ended up with at least one child in our bed each night, but the the thought of a little privacy was nice!

There were a few rude staff at breakfast, but nothing that could dampen our spirits. The boys got husband to order breakfast one morning, (to a particularly rude member of staff) in the voice of Heimlich, the camp German caterpillar from bugs life, who just wants to be ‘a beautiful butterfly’. It tickled us anyhow! 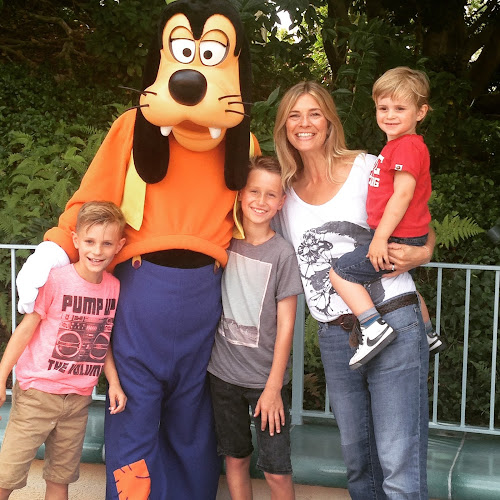 Without pausing for breath we were straight into Disney mania, heading off to ‘the happiest place on earth’ the very 1st day. There was a method to our madness. We figured if we could wear them out yet keep them occupied all day, the jet lag wouldn’t be too bad? And it worked. We posed for photos with every character we could find, and went on every ride that our little ones were tall enough for. They loved the Star Wars show, ‘real’ stormtroopers running through the cafeteria….you don’t see that everyday. They were in awe of the whole thing and it was wonderful to see. Little man especially, having never been to anything like this before, had a constant amazed face all day long. It was fantastic. We saw Nemo as we sailed under the ocean in a submarine, flew in Dumbo, sang that slightly psychotic ‘small world’ song, again and again and saw where ‘real’ princesses lived in the magical castle.

The main Disneyland park is particularly great for smaller children, and i’d say The Californian adventure was more suited to our older two boys. They are both magical and exceed expectations, but it’s a lot of money to spend if your child can’t reach most of the height restrictions so just something to bear in mind. 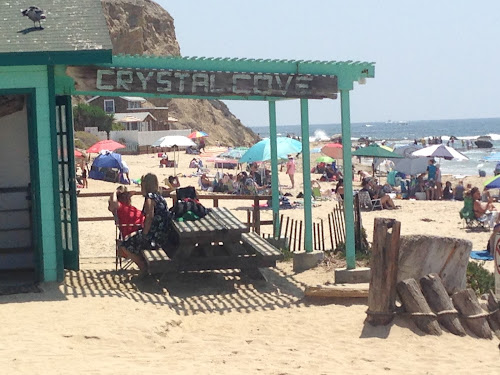 After a day in the thick of it we decided some ‘chill’ time was needed without quite so many E numbers on every corner. So we got ‘The Beach Boys’ in the CD player and headed to the beach. I’d researched a little about where to go in Orange County and come across a place called Crystal Cove down at Newport Beach. I absolutely loved it. The sea was full of local kids body boarding with my boys eagerly watching how to do it. It doesn’t take kids long to pick things up and before long they were making new best friends and catching waves like little Californians:) They had a ball. 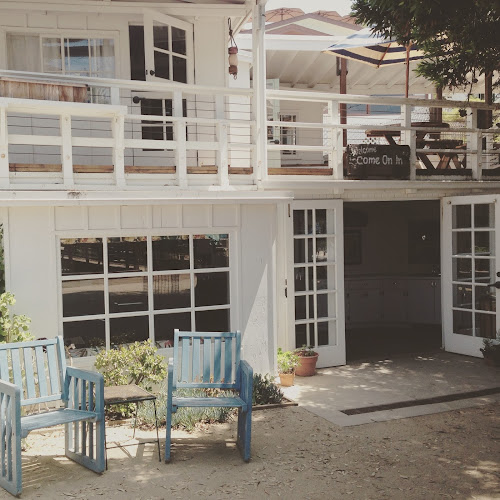 The cove is dotted with traditional 1920s beach huts that are available for rent (pretty reasonably too as they are owned by the county). The sort of places you could imagine Marilyn Monroe staying over for a weekend jaunt. They have kept many of the original features from the 20s and they all looked out to sea. What a way to wake up in the morning. Simply beautiful. Next time we head to California I am definitely renting one for a few days. Not that i’m an old romantic or anything! 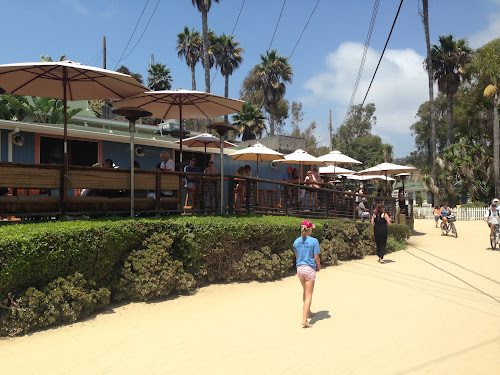 The only restaurant in the cove is The Beachcomer Cafe, which looked gorgeous, but with a queue 20 people deep nearly all day long, we never managed to get a table. Worth booking in for lunch in advance. 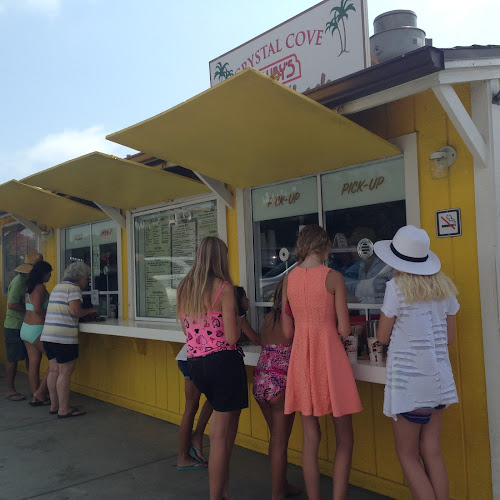 At the top of the cove, on the edge of the cliff lies Ruby’s shake shack. Again, hugely popular, with a mile long queue but so worth the wait. Milkshakes to die for and burgers that wreaked havoc with my diet. Scrumptious. To say the Atkins diet originated in the States, it’s strange how much they like their burger bars!

One more place of note would be a mile down the Pacific Coast Highway, to a shopping area for the locals. It had the spas, boutiques and quaint coffee shops you’d imagine. With everyone looking like a movie star I felt slightly conscious in my sand covered shorts and tee, but I think they assumed it was a british look. I fell in love with almost everything in a gorgeous shop called JuxtaPosition home. Quite the curiosity store of homewares, fashion and trinkets. All linen tunics and reclaimed tables. Beautiful. 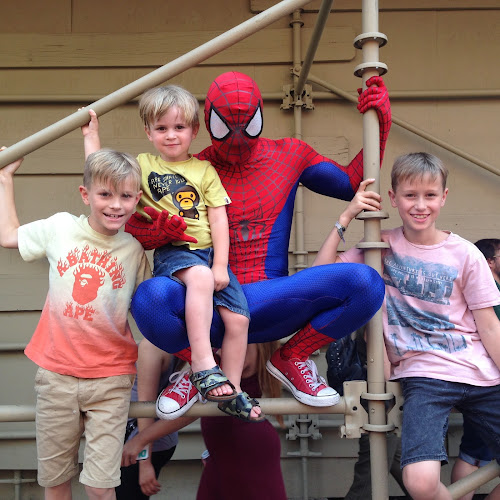 Not quite ready to face a day at another theme park we headed instead to the centre of LA. We may as well have gone to the theme park:/ I’d forgotten the traffic in this city is the worst. 3, sweaty, thirsty, hungry and jet lagged children in the car is not a good mix for being stuck in traffic for hours. We did the only thing we could do and headed to In n Out burger! Cheap as chips and soooo good. But burgers again, my diet was well and truly out the window by this point! We popped down to Hollywood Blvd to see the famous stars and The Chinese Theatre hand prints.We met spiderman on our way, who for 5 bucks made quite an effort for a pic:/ There’s characters everywhere but their all in the cheap version of their costumes, that don’t quite fit or look in need of a wash:/ If you don’t want to ruin the magic for your kids maybe do Disney and Universal first. We stopped by a stunning baby store on Robertson Blvd called Petit Tresor to ransack their Blabla offering and add to the ever growing teddy family. 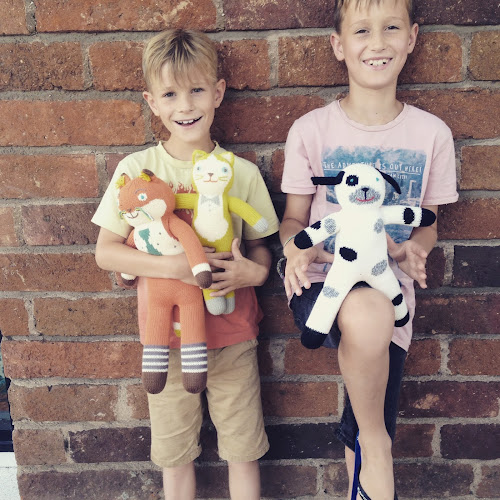 Universal was such a great day out as a family we ended up doing it twice. Unintentionally we had timed our holiday just as American kids were going back to school and i’d say if you were planning a trip here, to do the same. It made a big difference. Wait times were about 20 minutes compared with the hour or so when we’ve been before. The kids loved the studio tour. And though this was the one attraction with a huge wait time, the steward took pity on us when he saw little man screaming in my arms after just 5 minutes, and jumped us straight to the front. Result! Phsyco was beyond him thankfully and he just laughed at the funny man lifting a body into the car:/

The boys loved the Simpsons ride and the animal actors, with Fred taking a particular interest in the scantily clad girls dancing at the Fast and Furious show;) Jurassic park was a welcome relief to be soaked in 30 degrees heat and Shrek and Donkey are always a winner.

The slog home through that traffic threatened to ruin a fab day out, but we all had a good giggle after i’d googled mapped a short cut through Compton. Apparently people, and especially tourists in a glaringly obvious hire car, really shouldn’t take de tours through Compton:/ 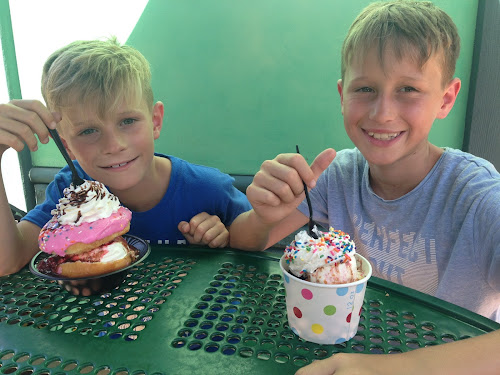 Californian Adventure is totally different to the main Disney. It has more thrill rides and much more pixar characters to pose with. I took Walter on the Ariel ride and as we were getting off walked straight past Victoria Beckham! She looked gorgeous of course, if a little hot in jeans? A wee bit excited about my celebrity spot, I hurried over to husband and the boys, and low and behold David Beckham, Brooklyn and co were walking right towards me. I’m rubbish with these things, i’m not cool at all like i’d want to be. Not quite sure where to look I kept my head down and only dared a sneak peak after they’d passed! Sad I know. The Daily Mail wrote a piece detailing their trip to Disneyland, saying they looked like any other family queuing with the masses for the rides. Utter rubbish. They had a Disney lady touring the park with them and most definitely jumped the queues! But hey, it’s David Beckham, we can let him off.

I was once a little dare devil but that feeling has long since disappeared since having kids. That fear however, did not stop my kids forcing me onto every scary ride including California Screamin, Hollywood Tower etc. I screamed. A lot. I was most definitely not cool. Glad Team Beckham were not sat behind me.Come early evening little man was totally out for the count in the pram but the boys wanted to stay for the light show. That really was worth waiting for. It was so stunning it sent shivers down my spine. They project the ‘movie’ through the fountain spray, with added music and lights for extra effect. It was in short, exactly as you would hope a day at Disney could be, truly magical. 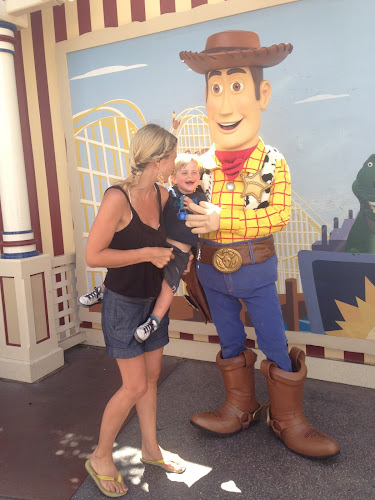 Holidays to Disney and Universal are not relaxing, but I suppose they are not meant to be. It’s all about the kids and filling their little heads with amazing memories I could only dream about as a child. Though I feel like I need a holiday after just getting home, it really was an amazing experience. They are full of tales of their Californian adventure, and we as parents, shall forever cherish those little faces filled with amazement:)

Sounds like an amazing, action packed holiday. Glad you managed a beach too though! We haven't made it to Disney yet, but is definitely on our list to do soon x #countrykids

Thanks Sara:) The beach was just what we needed to calm everybody down after the madness of Disney:) Trip of a lifetime but do take your walking shoes! X